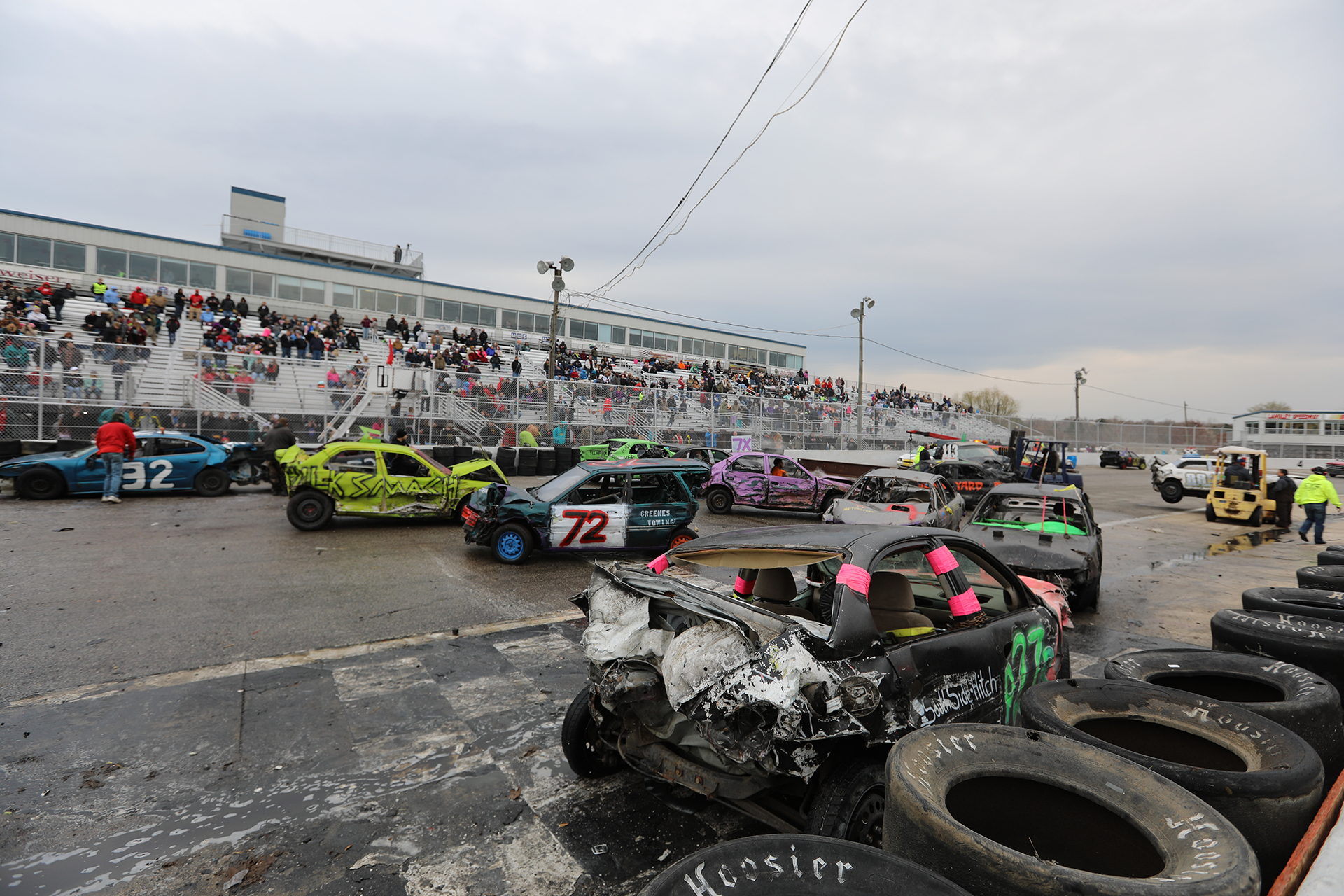 HAMPTON, VA (March 10, 2018) – Opening up the 2018 race season at Larry King Laws Langley Speedway was the, “Bubba and Franks BBQ, Day of Destruction”. What was typically an end of the year event to close the race season was back by popular demand and turned into this year’s opening event at the .395 oval for its 67th race season. All the events will feature wet, soapy portions throughout the track creating slick conditions for all the race teams to try and avoid. Also, there will be many other car damaging obstacles to steer clear from posing a unique challenge for the competitors. Here’s a recap of the afternoons race events.

Reverse Race: Joshua Fehrle survived the mayhem completing all three laps in reverse to win the reverse race event. After starting deep in the field in the ninth position, Fehrle was able to weave through the field and escape unharmed in the win. Keith Brown along with Jon Sanders finished second and third respectfully.

Flag Pole Race: In a race that had various flag pole locations around the track where the cars had to go around in route to completing the lap. Dale Parro outlasted the rest of the field in the five lap shootout dodging front bumpers and other parts fallen from the cars to win the flag race. Also limping in to the checkered flag finishing second and third on the grid was drivers Corey Epperly with Kenny Marshall in the flag race thriller.

Bag Race: In the bag race feature, race drivers would have a co-pilot to help with the navigation but for the driver, he’ll race with a bag over his face. As one might imagine, car destruction would soon begin in the eleven car field. Off to a hot start in the two lap sprint, Sean Calway and Shawn Dellett would lead both laps and go on to win the bag race event. Mike Gleichman and Rey Royal would finish in the runner up position just two car lengths back from the race winners.

Train Race: In an event where two cars are chained together in a five lap feature, five race teams locked horns to decide who had the skills and who could just keep their cars in control. Green flag waved what seemed to be a tamed start certainly didn’t finish that way. Keith Brown and teammate Bob Rove took over the race lead on lap two and from there, went unchallenged to the checkered flag. Jon Sanders with his teammate Corey Epperly would lead early but would finish in the second position.

Appliance Race: In the appliance race, the race team who can strategically place all five appliances on his race car and complete all five laps first decides the race feature. Refrigerators, washing machines, driers and such were used and leading early in the race was Robert Pellek. But soon after, Bob Royal took a turn as the leader before giving way to the experience veteran of the event Danny Harrell who once again, would go on to win the appliance event. Raymond Russell finished runner up along with Rex Royal in third.

Tug of War: In this event, two cars go bumper to bumper in a push off, hoping to push the other back and across a line to win. In the single elimination style competition and in a front wheel drive Subaru, Corey Epperly won the Tug of War feature besting track veteran Danny Harrell. Harrell in a Lincoln Town Car proved superior throughout the competition but in the final round, never budged Corey Epperly for the win.

Featured Enduro Race: Fifty laps consisted of the Enduro race featuring forty six entries in the afternoons event. With a track littered in debris, soapy, wet sections in every corner, the green flag waved to field as Nate Lundeen established the early race lead. Several laps later, Justin Fanslear, Corey Epperly, Kenny Marshall and Danny Harrell took turns leading, swapping back and forth. Later laps in the race saw Rob Rowe coming through the field and with the race whining down, took over the race lead. But back would come Danny Harrell who was able to get to the bumper of the race leader and send him into the turn three wall. To the thrill of the fans, Rob Rowe was able to continue but Danny Harrell would be the victor. A great celebration in Victory Lane ensued between the two drivers concluding the Enduro race feature.

Full Size Car Demolition: Six cars participated in the Full Size Demolition Derby event leaving the capacity crowd stunned at what they had seen. With hoods, doors and bumpers laying around, the last car rolling was the ride of Joshua Fehrle winning the Full Size Demolition Derby. Fehrle was brilliant at keeping his nose clean avoiding damage while giving some of his own. Joshua Fehrle needed about twelve minutes to get the job done and winning the event.