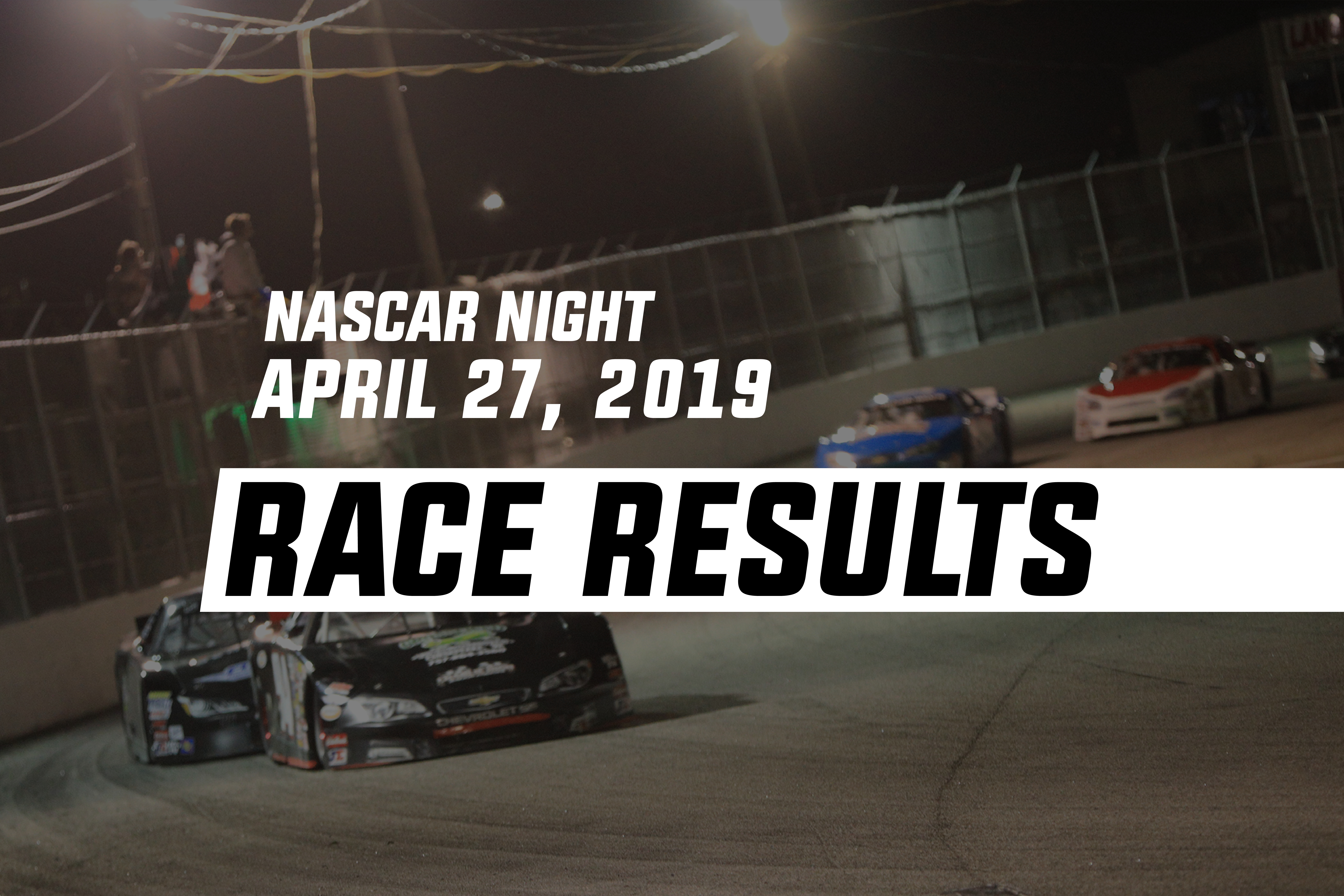 Hampton, VA (4-27-19) Local short track racing in the Mid Atlantic was back in action at the historic Larry King Law’s Langley Speedway. With NASCAR as the chief sponsor of the event, providing the on track excitement was the ERA Realtor Winged Champ Karts followed by the Parts Barn Enduro division. Also highlighting the grand evening were the Riverside Paper Pro Six’s, Old Skool Video Games Super Streets and twin races from the Taylor Waste Services Late Models. With the season well underway, points in the run for series championships are always at a premium and the trip to Victory Lane still all too sweet. Here’s a recap of the action and how it all came down. 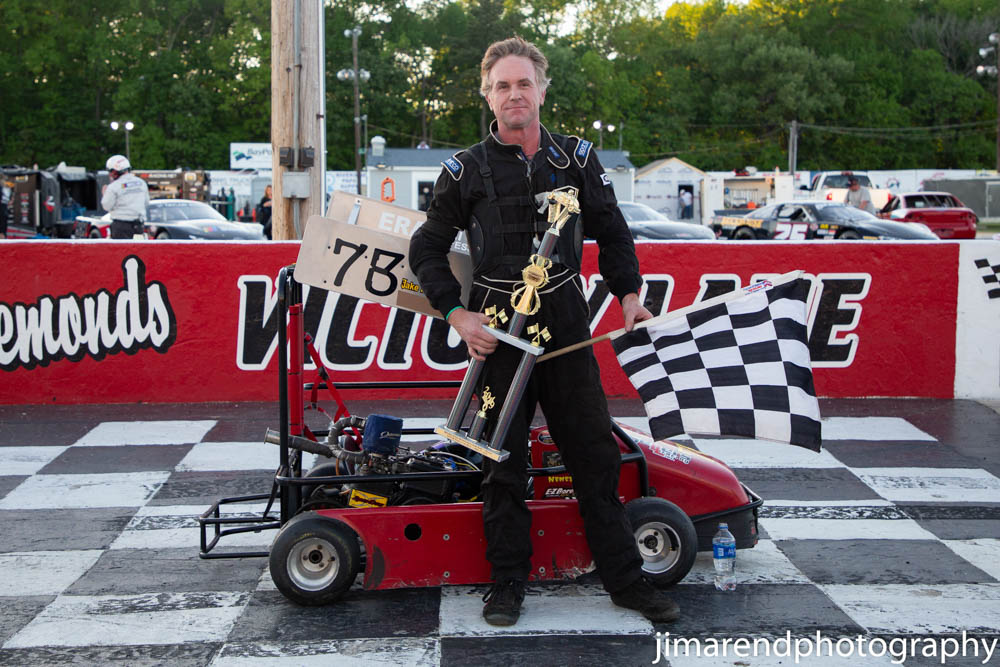 ERA Realtor Winged Champ Karts 20 Laps: Tim Waltrip picked up his first race pole of the season with the pole lap being 23.569 seconds. Aaron Leach got the two spot on the grid only twenty nine thousandths off Waltrip’s pole time. Matthew Leach, Jeremiah Strandberg and Garry Osborne completed the Winged Champ Kart five best. Green flag was shown and pole sitter Tim Waltrip would lead lap one. Making moves early and headed to the front would be Chris Bechtel who soon latched on the leader’s rear bumper. Also making moves would be Jake Harberts and Jeffrey Johnson. Just before the halfway, the four car breakaway consisted of race leader, Tim Waltrip, Jake Harberts, Jeffrey Johnson and Aaron Leach. But then came the battle for the lead that saw Jake Harberts take a turn as the leader. From there, Harbert’s hot rod became three cars wide where nobody could pass and went on to win the Winged Champ Kart feature. Jake Harberts from Victory Lane, “The whole time I think I was driving out the rear view mirror when I had my teammate behind me. It was a great race, had a great time, it’s nice being in Victory Lane”. 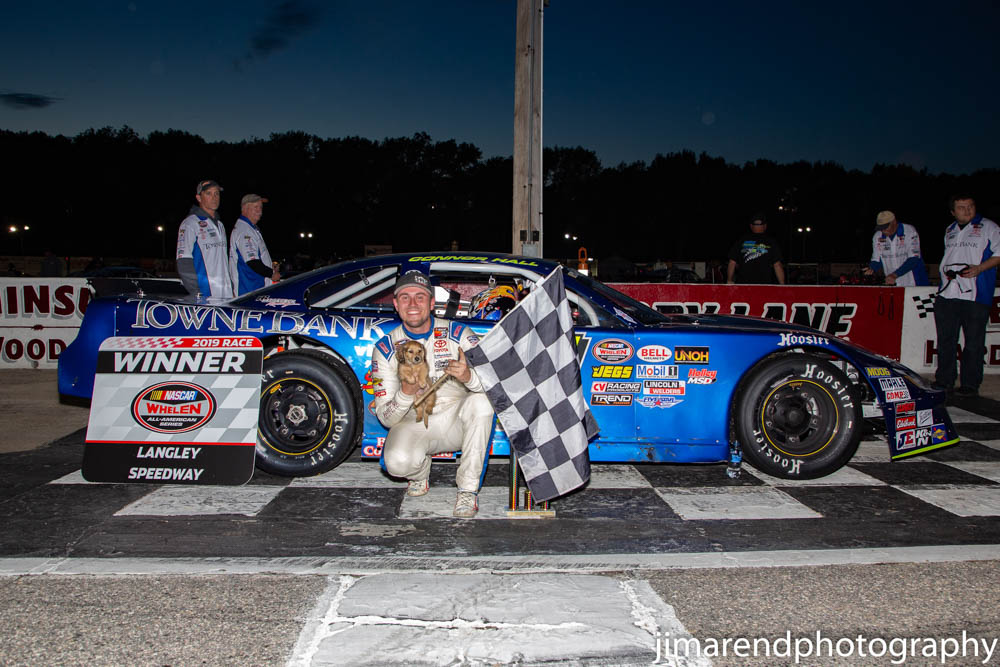 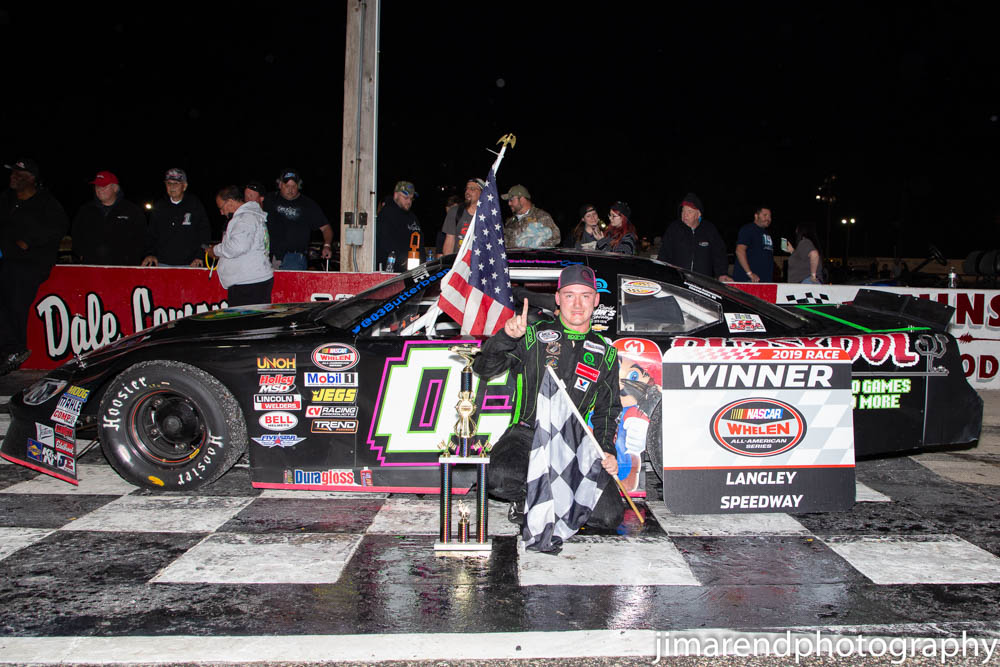 Taylor Waste Services Late Model Twin 70’s: Greg Edwards sat his machine on pole in a full field of Late Models. The pole lap was set at 15.729 seconds with Brenden Queen starting second in the front row. Danny Edwards Jr, Peyton Sellers and Connor Hall made up Late Model divisions best in qualifying. Green flag started the feature and coming around to lead lap one would be Greg Edwards. Brenden Queen with the obvious fast car earlier in the day would get hung up on the outside losing several spots in the early laps of the feature but eventually had to come to pit road. Benefitting with a fast car as well would be Danny Edwards Jr showing second on the grid. Laps later, the race had its first caution when Craig Eastep went around on the backstretch. After the brief break to the action and on the ensuing restart, the so called Big One happened. Four cars were involved, Duane Shreeves, Rick Gdovic, Rodney Boyd and Cameron Bowen with damage. After the red flag for cleanup, racing resumed with Greg Edwards as the leader followed by brother Danny Edwards Jr. Connor Hall picked off a spot to third and joining the leaders would be Rev Racing competitor Nick Sanchez in fourth. At the halfway, Greg Edwards continued to lead, Connor Hall had worked his way to second chasing a three car length lead. Laps later, the three car length lead would vanish as lap traffic allowed for Hall to catch the leader. Looking, poking and finally getting the nose underneath, Connor Hall became the new race leader when lap fifty one went up on the board. From there, the race lead expanded as Connor Hall wins the first Late Model feature. Hall from Victory Lane, “I’ve pretty much given up on qualifying after four years here. The Edwards boys can pretty much drive this place blind folded in an ill handling race and still show me how to do it. I knew we had a pretty good long run car, I really didn’t expect to run that well and we knew it wasn’t where it needed to be. We took some swings at it, I guess luckily were batting a thousand and swinging good”.

In the Late Model nightcap, the eight car mandatory invert was given to the grid forcing race one winner Connor Hall to start eighth. The pole position on the grid belonged to Brooke Storer when the green flag flew and on lap one, Terry Carroll was the race leader. Just a few laps in, son Justin Carroll took his turn at the lead and soon mounted up a twelve car length lead over second place Nick Sanchez. Still early in the feature, Brenden Queen who had race one suspension trouble and on fresher tires would march through the field from the back of the field. Not long after did Queen run down the leader and soon made the clean pass but Justin Carroll was not letting Queen get away. Just before the halfway, the leaders encountered lap traffic with race leader Brenden Queen fairing better the Carroll. But the lead created was wiped away when Zach Lightfoot went around to bring out the caution. Green flag restart and race leader Brenden Queen takes off. Nick Sanchez along with Justin Carroll battle briefly for second as Sanchez took the spot. Meanwhile, race one winner Connor Hall was sneaking through the field but needed several laps to finally clear third place Justin Carroll. Coming through with him was Greg Edwards as the race entered into the latter stages. Back up front, Brenden Queen was in his rhythm, hitting his marks and checking out to a half a straight away length lead. Final laps of the feature got interesting when lap traffic played a role but it was all Brenden Queen who wins the second Late Model feature. Brenden Queen from Victory Lane, “Well you know Langley is big, I had to watch Connor Hall win one like this and I didn’t plan to go out the first race. Can’t help the spindle broke and about piled into the fence but we’ve been fast all season. Fans can think what they want, were still gonna take this win and come back and win a real one”. 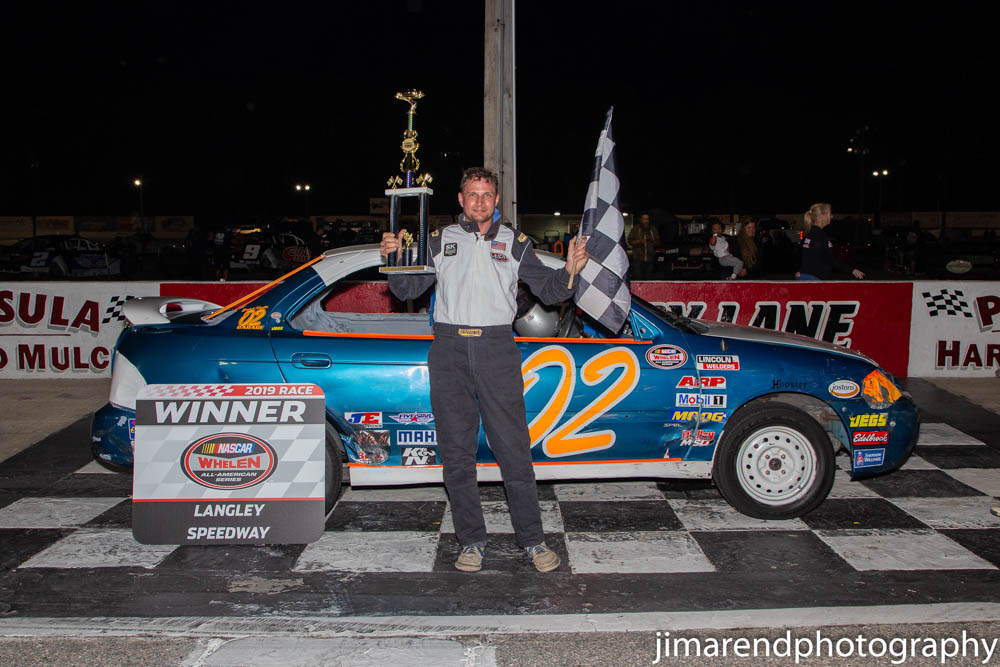 Parts Barn Enduro 30 Laps: Thirty four Enduros made up the starting grid and with the grid decided by a pill draw. Michael Joyner pulled the one pill to start on pole and to his outside would be Mickey Chinn. Green flag started the feature and as expected, the beaten and banging. Leading lap would be pole setter Michael Joyner with Chris Kane hot on his trails. Wasn’t long before the race leaders encountered the slower cars and creating some tense moments. On the move and catching the leaders would be Bill Eaker from the nineteenth starting position showing fourth just before the halfway. Also, on the move was Richard Ellis who after the halfway was wanting some of the race leader Michael Joyner but fell off suddenly. Taking the two spot on the grid as a result would be Bill Eaker just two car lengths away. But Michael Joyner had the smooth wheel, the fast hot rod and the blessings of lapped race traffic and would win the Enduro race feature. Joyner from Victory lane, “Yeah I knew when I had the pole, we had a good car. If I could just keep it on the bottom, I knew that they couldn’t get to me. I saw that they were a lot faster than me and I knew if I could keep it on the bottom that they would have to move me, wreck to get me out of the way. I had a blast”. 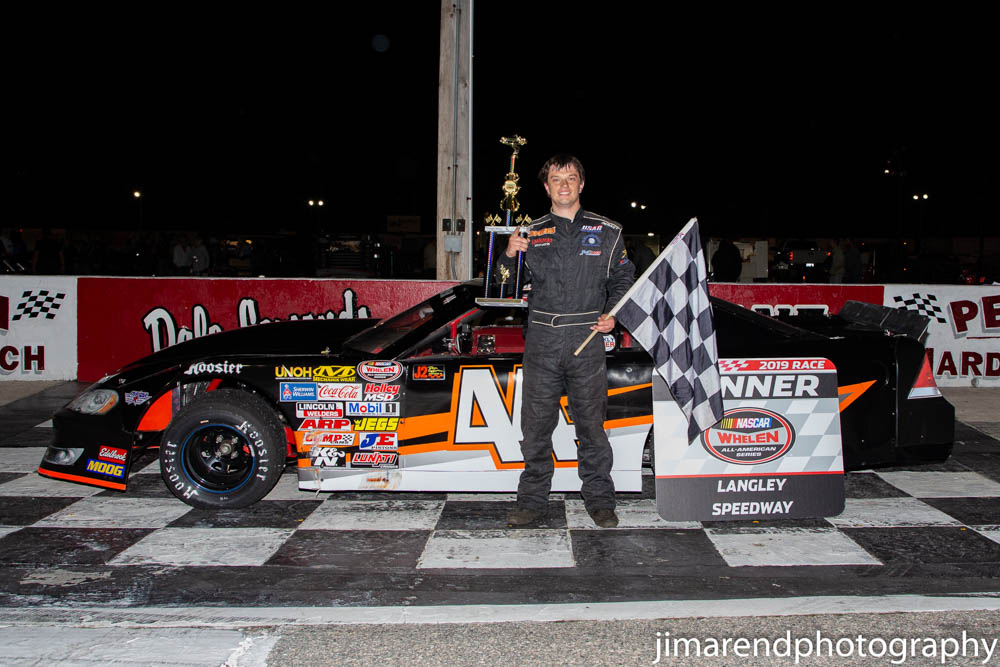 Riverside Paper Pro Six 30 Laps: Jared Clarke collected the Pro Six series pole in the afternoon time trials with a 17.106 second lap. Just missing the pole would be Travis Wall just sixty four thousandths of second off the pole time. Eric Schaffer, Bobby Hall and JB Sipe rounded out the top five in qualifying. Green flag waved and out of turn two the field goes three wide for the race lead. Jared Clark, Eric Schaffer and eventual race leader Travis Wall supplying the thrills. Laps later, the second place position was finally decided as Bobby Hall had the spot. Eric Schaffer, Jared Clarks and JB Sipe was the early race leaders in the grid. Single file were the leaders during the green flag run when just before the halfway the race had its first caution. Back to the green and race leader Travis Wall set sail with Eric Schaffer in tow after passing Bobby Hall for the spot. Laps later, the races second caution would be on the track as Eric Schaffer and Bobby Hall was involved. The result was both drivers would go to the rear of the field on the next restart. After a series of cautions to the race, green flag would wave once again and Travis Wall was money on the restart. Final laps saw Bobby Hall make his way to second and hoping to run down the leader but Travis Wall went mistake free to win the Pro Six race feature. Travis Wall from Victory Lane, “We got the car back Wednesday, there was no motor in this car Wednesday afternoon. So, to get where we are now, it’s so cool to come back, go out there and win. To have a good car and drive it, it was like a Cadillac, it was awesome”. 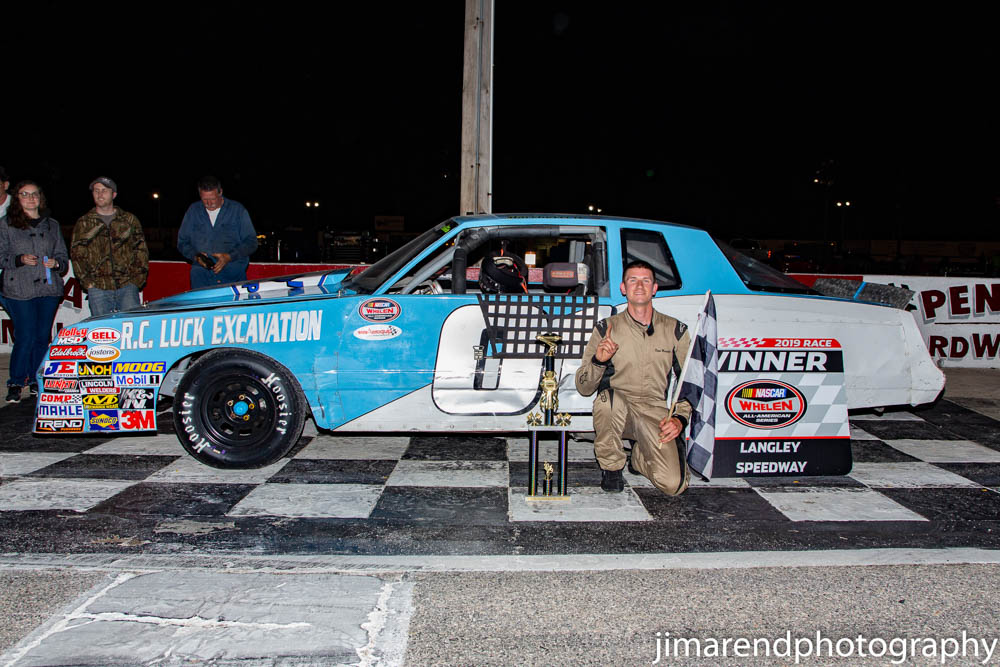 Old Skool Video Games Super Streets 40 Laps: Renno Marchetti scored the Super Street series pole by clicking off an 18.518 second lap. Earning the second starting position in row one would be Gordon Weeks. Colby Vance, Dale Parro and Johnathan White completed the five best in qualifying. Green flag waved to start the feature as forty laps would decide who would get the trip to Victory Lane. From the outside row one starting position, Gordon Weeks would lead lap one. Regrouping from what might have been a sluggish start, pole setter Renno Marchetti would soon come back to retake the lead. But then troubles for Gordon Weeks as he would go around to bring out the race caution. Green flag restart and Renno Marchetti takes off to secure the race lead. With him came Randy Akers along with Dale Parro and soon the lead began to expand. But then another race caution to the event when Caitlyn Joyner spins around on the front stretch. Green flag was back in the air and once again, race leader Marchetti would show the grid into turn one. Gordon Weeks, who was spun earlier had worked his way back to second as Dale Parro kept pace in third. At the halfway, Marchetti continued to lead as Weeks tried to keep it close. Akers found his way to third as Bill Eaker made his way to fourth as the back half of the feature was underway. Laps later, Marchetti’s lead grew to eight length’s as the field became stretched out in the green flag run. Final lap and coming around uncontested taking the checkered flag, Renno Marchetti will park his ride in Victory Lane. Marchetti had this to say, “I was looking forward to racing with Colby, sorry for his misfortune. Car was pretty good, spun the tires pretty bad at the start. Anyway, got to thank all my sponsors, Langley Speedway, Old Skool Video Games and my wife Erin for spotting for me. Everybody watching at home, thank my mom, my me maw and thanks for all the fans for coming out”.