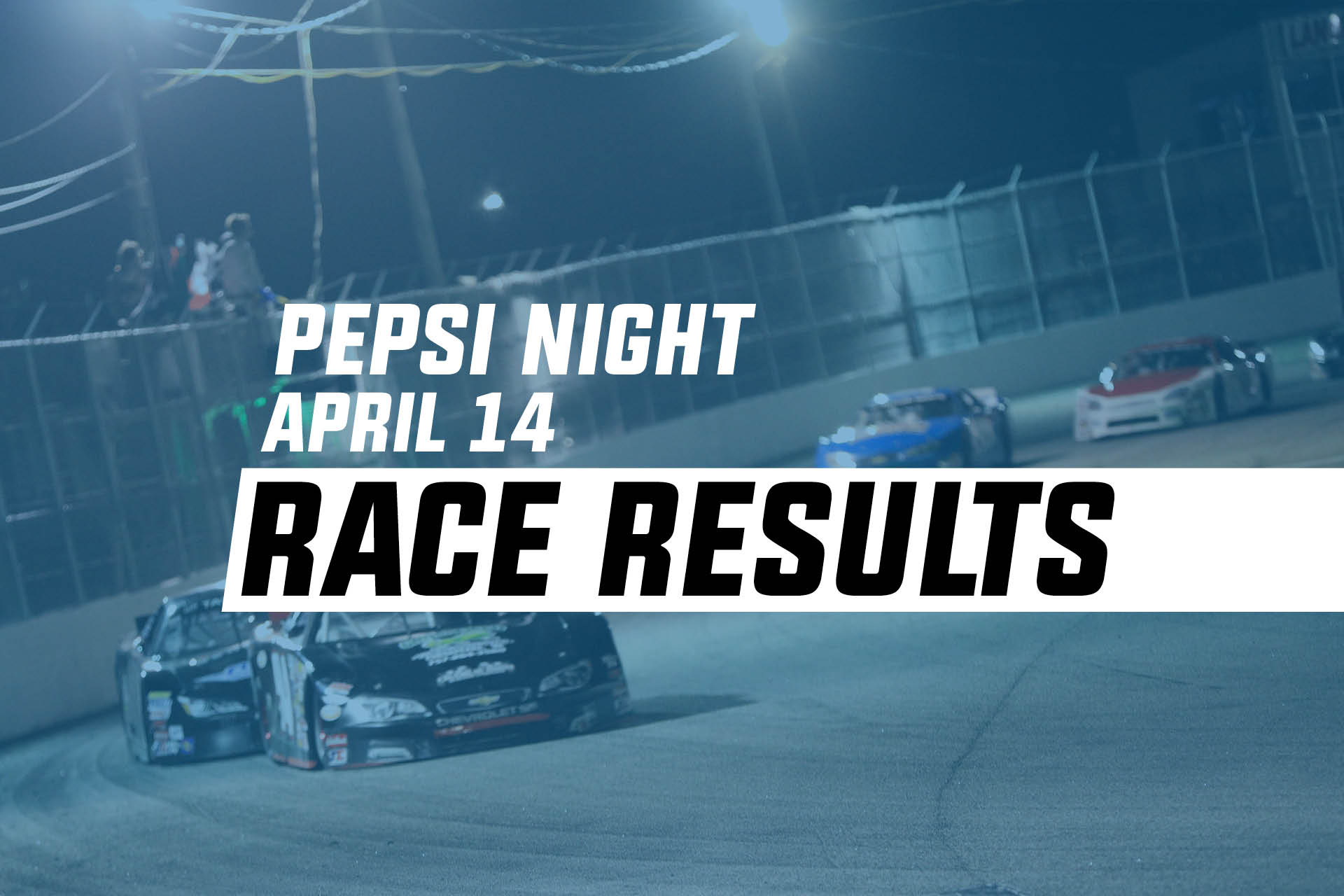 Hampton, VA (April 4th, 2018) – Back at it again and following up last week’s cancelation due to the rains. Race action at Larry King Law’s Langley Speedway was on track for this weekend’s, “Pepsi Night at the Races”. On the schedule and in action were the ERA Winged Champ Karts, Cycle City Corp Bandoleros and Legends. Harris Truck Shop Super Trucks, Pepsi Grand Stocks, Bojangles Enduros and twin race events from Larry King Law’s Modifieds. Eight races, two hundred and fifteen laps, here’s a recap of how it all went down. 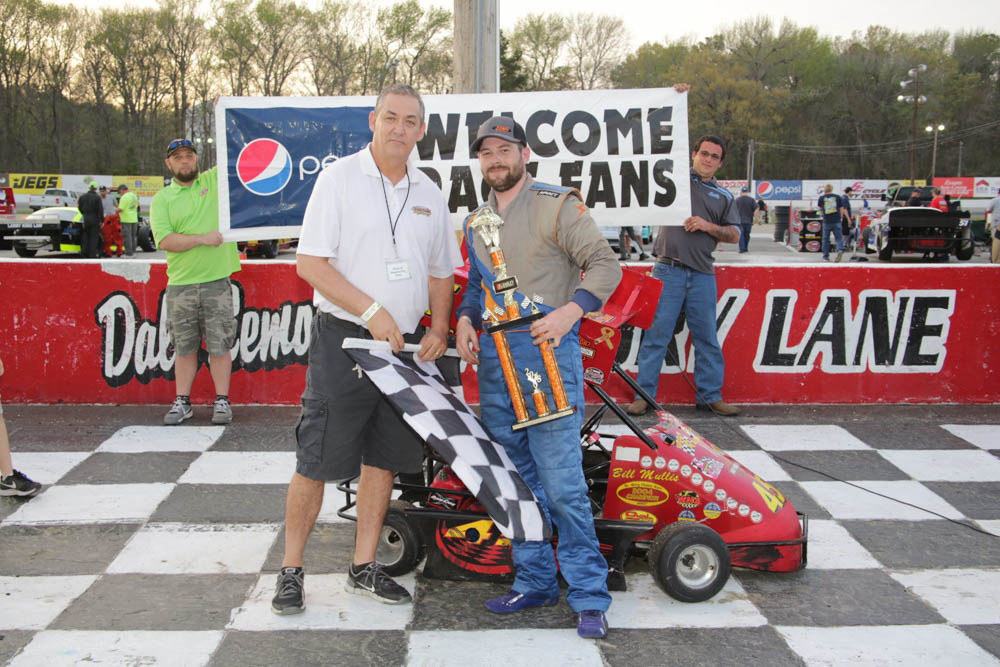 ERA Winged Champ Karts 20 Laps: In the season opener for the Winged Champ Karts, Aaron Leach was fastest in afternoon qualifying to earn the race pole. Posting his fast lap set at 23.051 seconds which was just a bit better than the lap of Garry Osborne by fourteen thousandths of a second. Chris Bechtel, Robert Pellek and Scott Allen would round out the five fastest in qualifying. Green flag would be given to the pole sitter Aaron Leach and by the exit of turn two the lead was secured. Early mover would go to Chris Bechtel from the three spot to second before the race halted in an early caution. Back to the green, Leach continued to lead with this time Danny Millard and Scott Allen all in tow as the half way was reached. Laps later, Allen was able to get to second but it was Aaron Leach able to cross the strip first for the race win. Aaron Leach from Victory Lane, “I had no idea what was going on behind me, I ran about three laps by myself and wondered if I was a sitting duck. Gotta thank Scott Allen for driving me clean coming to the finish”.

Cycle City Corp. Bandoleros 15 Laps: Wyatt Philyaw had the hot wheel in Bandoleros qualifying sporting the pole spot with a 21.202 second lap. Starting to his outside in a share of the front row would be Autumn Weaver in the ten car grid. Green flag would wave as the pole sitter would show the field on into turn one. Philyaw easily secured the point leaving positions second through fourth literally undecided. Once decided, Layton Harrison, Ryley Music were the cars on the move before the first caution flag waved. At the halfway, Wyatt Philyaw was still having his way as the leader as Autumn Weaver with Jacob Derrick took a turn at chasing down the leader. But three car lengths would be as close as they could get as Wyatt Philyaw picks up his first ever race win. Philyaw from Victory Lane, “I just gotta thank Blake Contracting, McCray Heating and Air, Nations Capital and my dad for getting me to Victory Lane. Thank all my fans and I love you mom”. 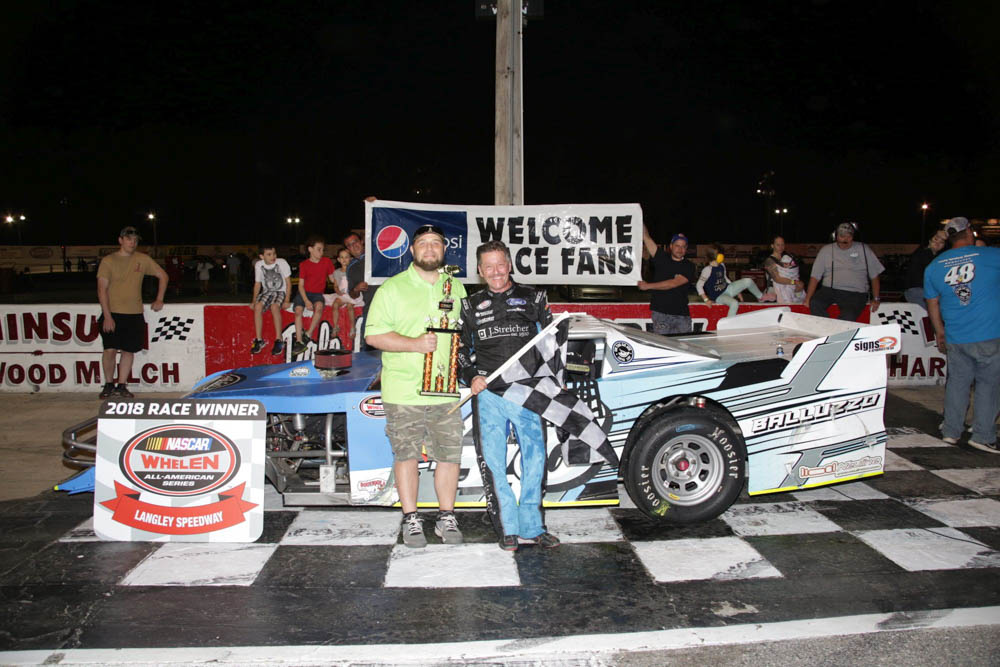 Larry King Law’s Modified Twin 30’s: In Modified qualifying, 2017 track champion Shawn Balluzzo picked up his first pole of the season with a lap set at 15.851 seconds. Chris Johnson’s lap earned him his share of the front row with Matt Carter, Brad Adams and Bobby Gery as the five quickest in time trials. The green flag would be displayed to the highly competitive race division and emerging from turn two was Shawn Balluzzo on point. Matt Carter would give chase to the leader mirroring his every move. Laps later it was Bobby Gery on the move threating second as the halfway drew near. Past the halfway saw Balluzzo, Carter and Gery all nose to tail as lap traffic would be encountered. Late now in the long green flag run, Balluzzo would keep the second and third place cars at bay to go on to win the first Modified race feature. In the nightcap feature, Balluzzo would have to start eighth on the grid by virtue of his race win per NASCAR’s rules but elected to start in the rear of the field instead. Based on the invert, Chris Johnson would lead the field to the green. Green flag racing ensued as Johnson established the early race lead. Jamie Sample, Bubba Johnston and along with the hard charging Matt Carter were the fastest in chase of the leader. Meanwhile, Shawn Balluzzo was struggling getting through the field. At the halfway, the leader was harassed by Matt Carter in second both nose to tail. Several laps in the green flag run, Carter would haunt the race leaders line but with two laps to go, it all went down. Carter would make one last stab at Johnson making contact, spinning the race leader and ending their chances for the race win. After the brief caution, more of the same happened when Jamie Sample and Shawn Balluzzo made hard contact fighting for the lead. But it was Balluzzo surviving the fray, Sample was pointed the wrong way. Back to the green with just two laps to go, Shawn Balluzzo would take the lead and go on to sweep both Modified race events. Shawn Balluzzo from Victory Lane, “That was fun! The big problem is juggling on wearing the tires out for next week’s race, it’s a real juggling match and I had to use up the car really bad to get up there and then… the door opened”. 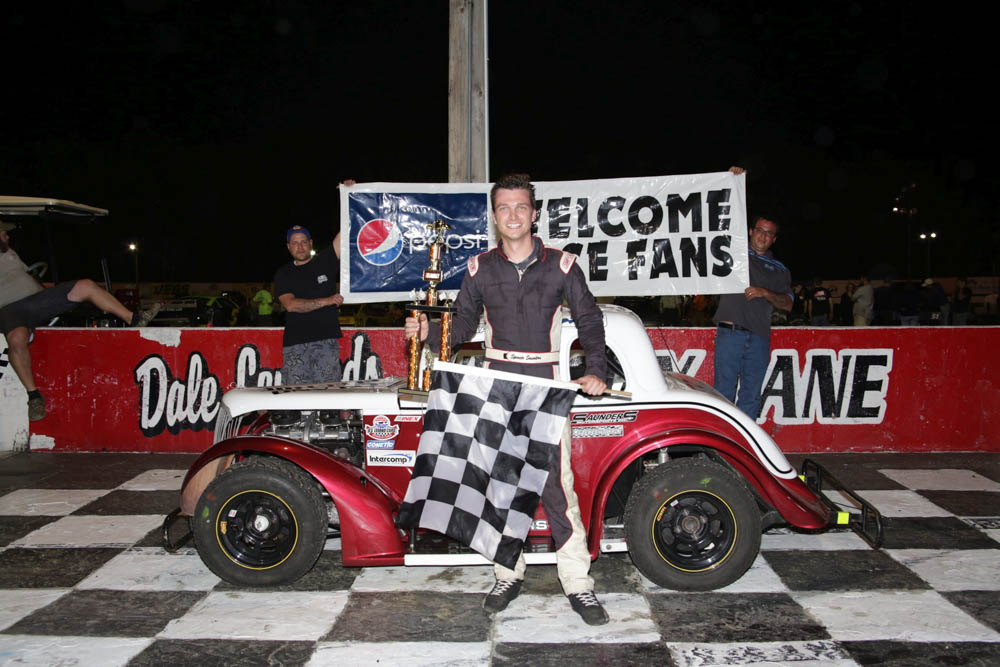 Cycle City Corp Legend 25 Laps: Spencer Saunders grab his first pole of the season in Legends Division qualifying. Saunders lap of 17.087 seconds bested the effort of Lane McKee who would start shotgun on the grid. Ryan Center, Jamie Price and Devon Courtney completed the five best in afternoon qualifying. Green flag would be given to the thirteen car field as Spencer Saunders lead the group into turn one. As Saunders continued to show the way, Jamie Price was the early charger making his way to second in chase of the race leader. Several laps in the feature, Saunders would mount an eight car length lead as the halfway was showing on the board. Price would continue his chase but it was Spencer Saunders crossing the stripe first going wire to wire for the race win. 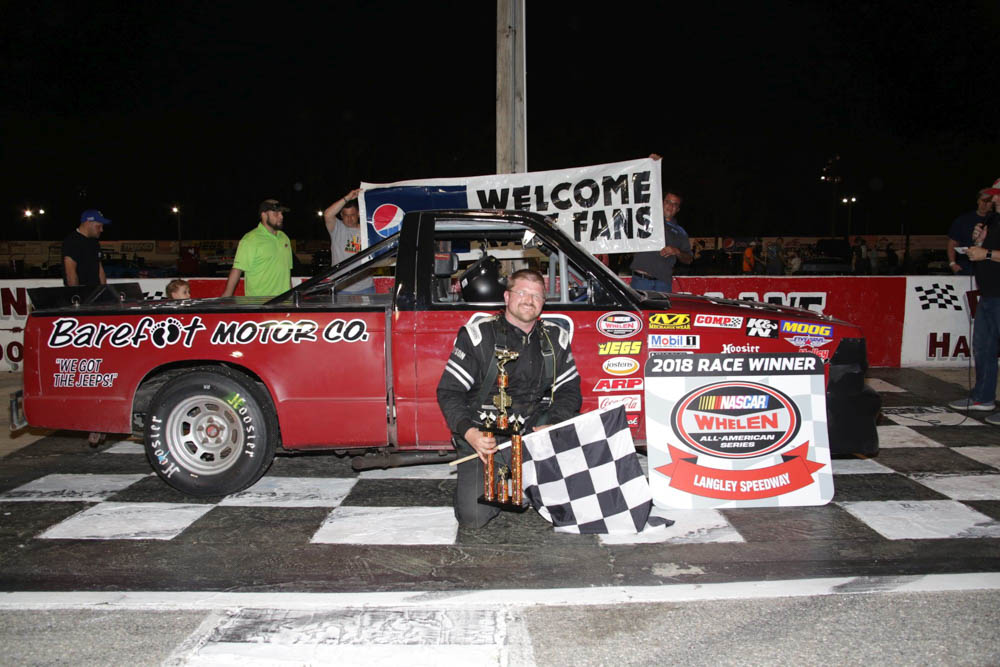 Harris Truck Shop Super Trucks 25 Laps: Dustin Mullins took the pole in Super Truck qualifying with his fast lap of 18.918 seconds. Starting second in the field would be Jacob Carr followed by the efforts of Ryan Huff, Richard Quinn and Elysia Potter. Green flag would wave and the pole sitter Mullins needed a full lap before the lead was secured. Jacob Carr from the outside was up to the task but settled in second with Ryan Huff in third as the first caution flag was displayed. Back to the green, race leader Dustin Mullins was able to make quick work of Carr and mounted an nine car length lead several laps in the green flag run. By the halfway, Mullins was easily dominating the event with Jacob Carr, Richard Quinn and Elysia Potter some distance on back. Much of the same was seen in the latter portions of the feature with Mullins in control. Without the help of a caution, Dustin Mullins would go on to win his second Super Truck race in a row. Mullins from Victory Lane, “I think we got the set up dialed in, motor is running great so. I kept looking back and seeing that black truck coming so he’s gonna be there as well as the other trucks as the season goes by its going to be really great racing. I’m looking forward to it and will give them everything we got”. 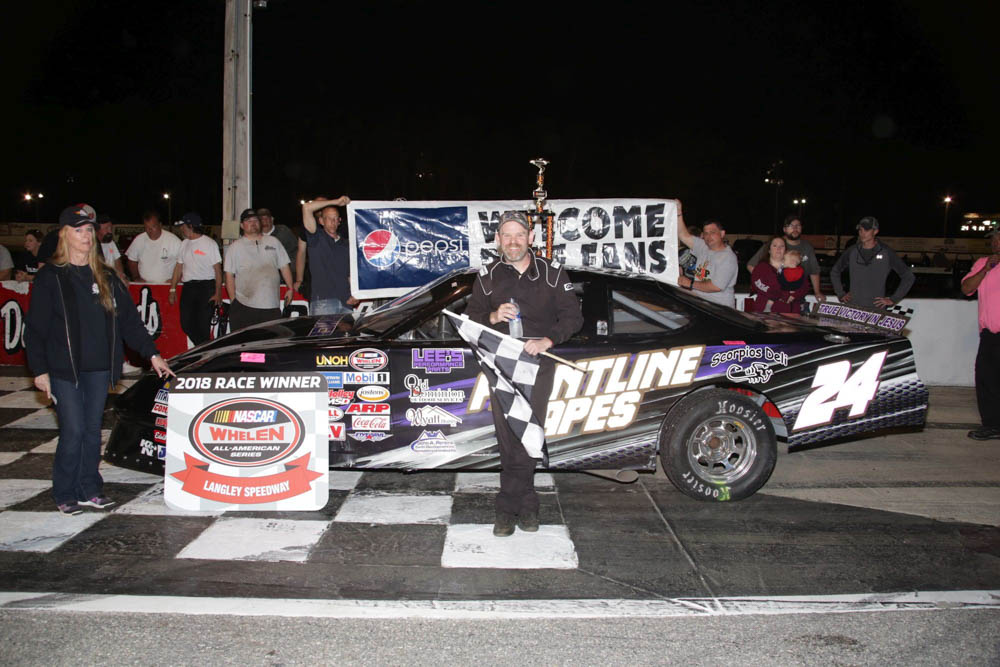 Pepsi Grand Stocks 40 Laps: In the always heated Grand Stock division, Sammy Gaita would earn his first pole of the 2018 race season with a lap set at 17.655 seconds. Tim Wilson was just a mere thirteen thousandths slower but earning his spot on the front row. Rodney Boyd, Michael Waters and Paul Lubno all showed speed in Grand Stock qualifying. With the green flag in the air, pole sitter Sammy Gaita took off with the early race lead. But a few laps later in the run saw Rodney Boyd applying the pressure and eventually got by Gaita for the lead. Tim Wilson would work his way by Gaita as well setting his sights on the new race leader. Halfway in the race would see its first caution, bunching back up the field and an always entertaining Grand Stock restart. Back to the green, Tim Wilson would make his move on the race leader. Contact between the two saw Rodney Boyd lose the race lead as Sammy Gaita benefitted from the exchange but then another caution for the damage to Wilson’s car. In a less eventful restart, Gaita would hold the race lead as Rodney Boyd would give a look underneath. But Gaita was having none of it and from there would go on to win the Grand Stock race event. Sammy Gaita from Victory Lane, “Man if I could ever see over the hood I felt like we could win. Doug Sample owns the car and he lets us come out here and play with it. Hopefully he’s happy now because he wasn’t happy the last one, at least they know were here”. 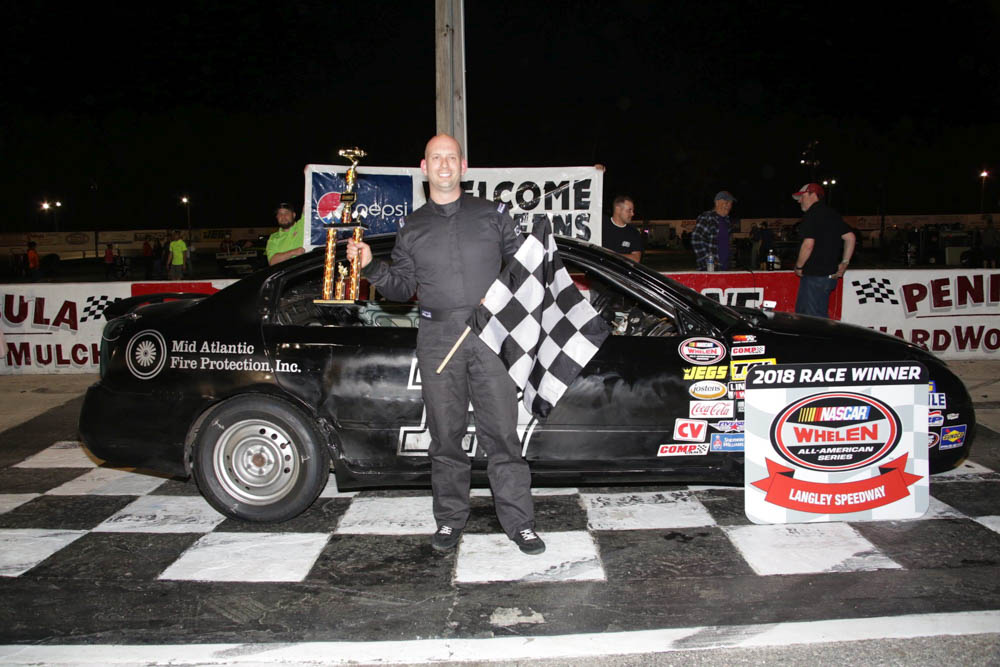 Bojangles Enduros 30 Laps: Don Mosingo would get the start on pole based on pill qualifying. Seventeen cars started the very popular race series when the green flag was displayed to the field. Don Mosingo would lead the field into turn one but after just one lap, the caution flew. On the restart, Ronald Klein took a turn at the lead for a few laps, then it was the hard charging Rodney Davis who would take a turn as well. Halfway portion of the feature saw Davis showing the way but here would come the car of Alex Floroff to give the lead a try. Late stages of the race saw race leader Alex Floroff continue to lead and go on to win his second Enduro race of the season. Alex Floroff in Victory Lane, “I had a bad pull on the pill, ended picking dead last but I got through the traffic. Rodney Davis put on a good show as well, gotta thank all the fans for standing around to watch this race”.