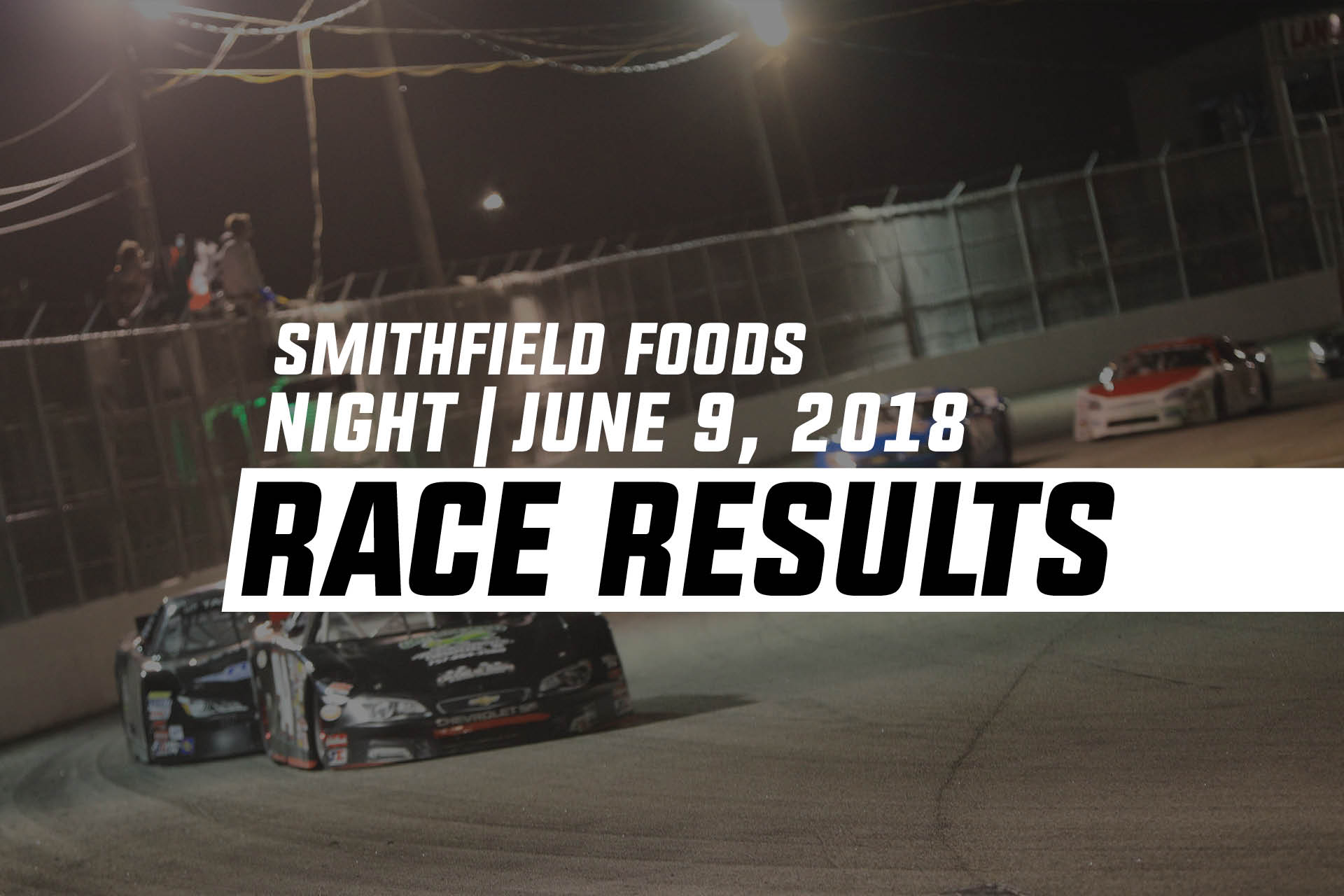 Hampton, VA (6-9-2018) Heading into the summer months, the temps and the race action was heating up at Larry King Laws Langley Speedway. After last weeks race card was cancelled by the passing storms, Taylor Waste Services Late Models were back in action headlining twin 75 lap events. Also, in action were the ERA Realtor Winged Champ Karts, Carroll’s Automotive U-Cars, Old Skool Video Games Super Streets, Riverside Paper Pro Six and the Bojangles Enduros. With each division points being contested as we near the midpoint of the season, this could be the week that identifies whose coming and who just might be going. Here’s the recap of the evening race action. 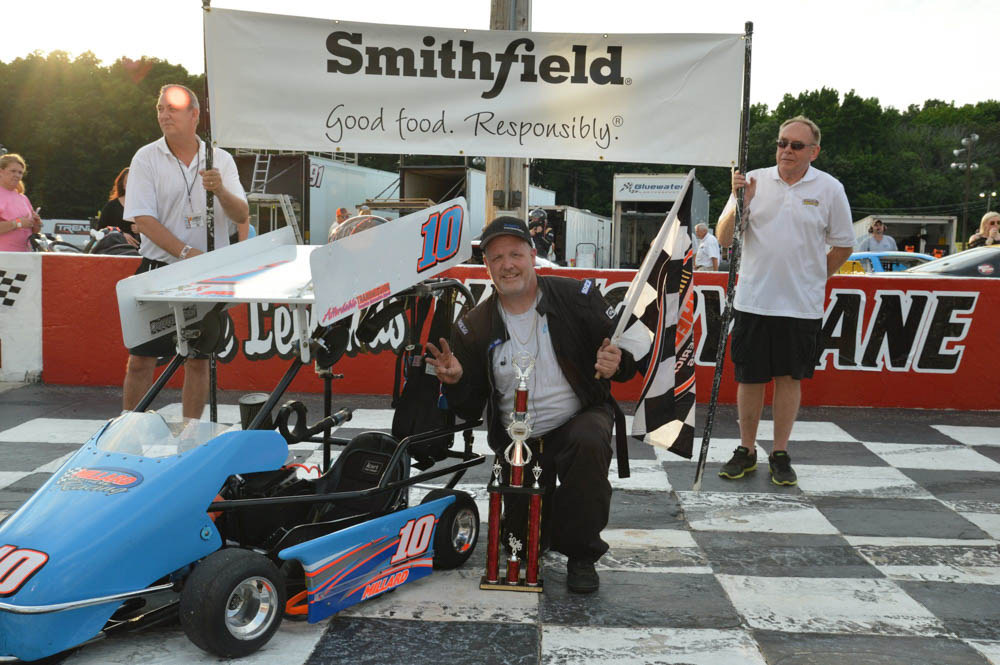 ERA Realtor Winged Champ Karts 20 Laps: Aaron Leach picked up another Winged Champ Kart pole position in afternoon qualifying. Leach’s lap at 22.842 seconds beat out shotgun starter Tillman Heuer followed by Danny Millard, Jeffrey Johnson and Garry Osbourne all in the top five. Green flag was displayedto the seventeen kart field and leading lap one was the pole sitter Aaron Leach. Not long in the run did Leach, Millard and Osbourne all in single file would get away from the rest of the field. By the halfway the race saw Leach and Millard in a two car charge to show the way with no pressure on back. Nose to tail were the leaders, beating and banging, swerving side to side in a jostle for the lead. But then Millard get position and with the momentum makes the pass for the lead and goes on to win the Winged Champ kart feature. Danny Millard from Victory Lane, “Can’t thank enough my buddy Aaron Leach, I stayed with him to the end, that was his race, he let me have it. But look, I’ll take it, he’s a class act”. 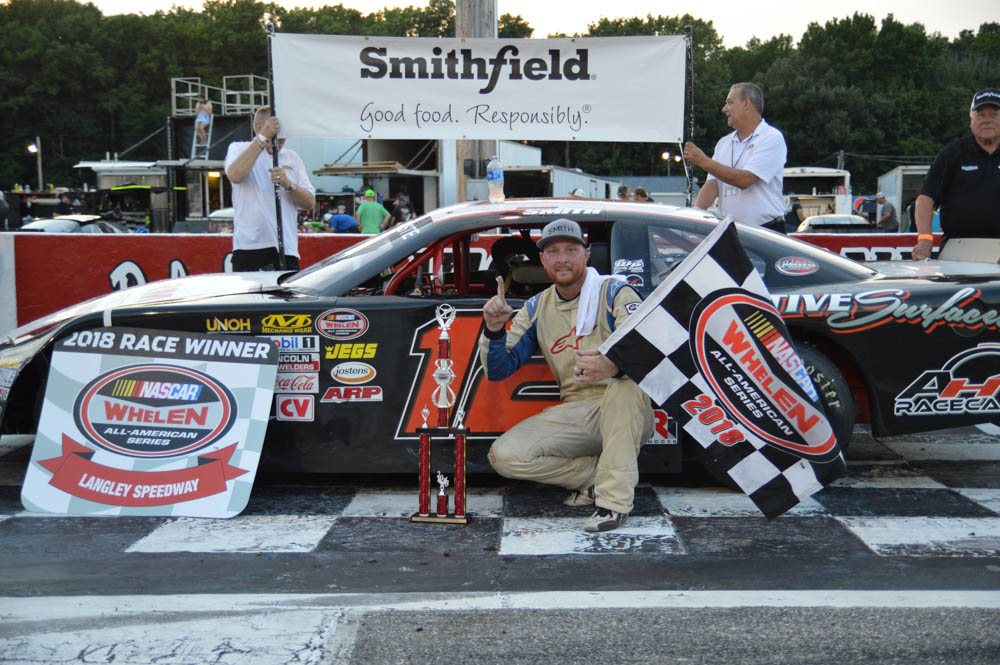 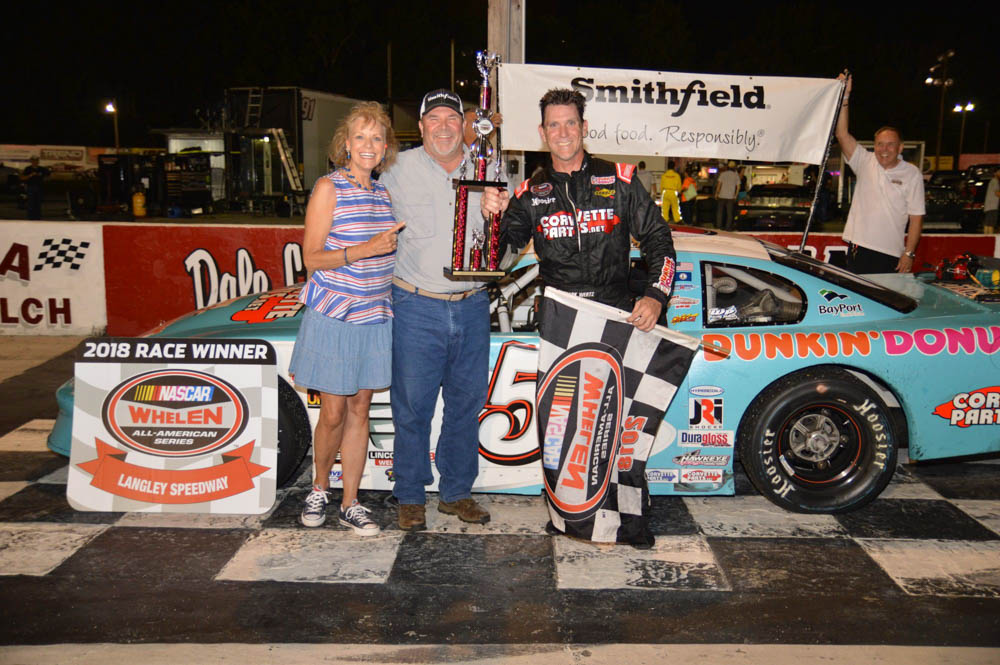 Taylor Waste Services Late Models Twin 75’s: Connor Hall grabbed his first pole on the season putting down a 15.645 second lap to earn the race pole. Nick Smith was just three thousandths of a second slower in his lap in a share of the front row. Danny Edwards Jr, Branden Queen and Mark Wertz completed the Late Model qualifying as the five best. The green was given by the flagmen and off into turn one with Connor Hall securing the lead by turn two. But the lead would be short lived as Nick Smith from the two spot took the race lead. Danny Edwards Jr was also able to do away with Hall who would then turn his attentions to the race leader. During the exchange for second with Edwards and Hall, the leader had quickly mounted up a half a straight away lead. Halfway in the race, Nick Smith continued to lead who then began to navigate through lap traffic. While Danny Edwards Jr continued to search for ways to collapse Smith’s lead, best racing was found battling for fifth as Branden Queen, Greg Edwards and Justin Carroll all battled. After the races first caution, Nick Smith won the restart followed by Mark Wertz who later gave up the two spot back to Danny Edwards Jr as the race entered the latter portions. But back up front, Smith was in cruise control and would go on to win the first Late Model feature. Smith in Victory Lane, “I tell ya, there’s only a few people here that know how hard we worked this past week”, said the race winner. “This race means so much to me, we worked our butts off, I didn’t know if we had a win in us. I thought, the hard work is going to pay off and it did so will see what happens in this second race. What else can I say, great race and glad to be back in Victory Lane”.

In the Late Model nightcap, NASCAR rules order the mandatory eight car invert handing the point to Rodney Boyd and forcing race winner Nick Smith to start eighth. Green flag waved with the pole sitter Rodney Boyd slow in getting going. Brenden Queen took advantage and after lap one was completed, Queen was the race leader. Early movers in the feature saw Justin Carroll along with Greg Edwards charging after the race leader Queen. Just short of the halfway, Greg Edwards and Brenden Queen would battle for the race lead. Several laps of side by side racing before Queen conceded the lead to Greg Edwards and got in line in second. But the ride on the move was Mark Wertz who started at the tail end of the field would get by Queen for second. Laps later, Wertz would run down Greg Edwards and soon became the races new leader. But the action didn’t stop there, while Wertz pulled away, Cameron Bowen made his way into the fold battling for fourth from Carroll but then the caution flag waved setting up what was going to be a thrilling restart. Back to the green with just a few laps left, Mark Wertz and Greg Edwards would battle for the lead going side by side beating and banging before Wertz got position to secure the point. From there, Wertz was not to be denied and would win the second Late Model race feature. Wertz from Victory Lane, “We’ve been testing a lot, lots of shop time, the guys been busting their butts”, claimed Wertz. “We learned a little bit, I knew we had a pretty good car in the first race, we were just one adjustment away. I knew those last three laps were gonna be rough, I was not going to be denied, we were either going to wreck em or win. This is number one hundred for me and I’ve spent thirty years trying to get em”. 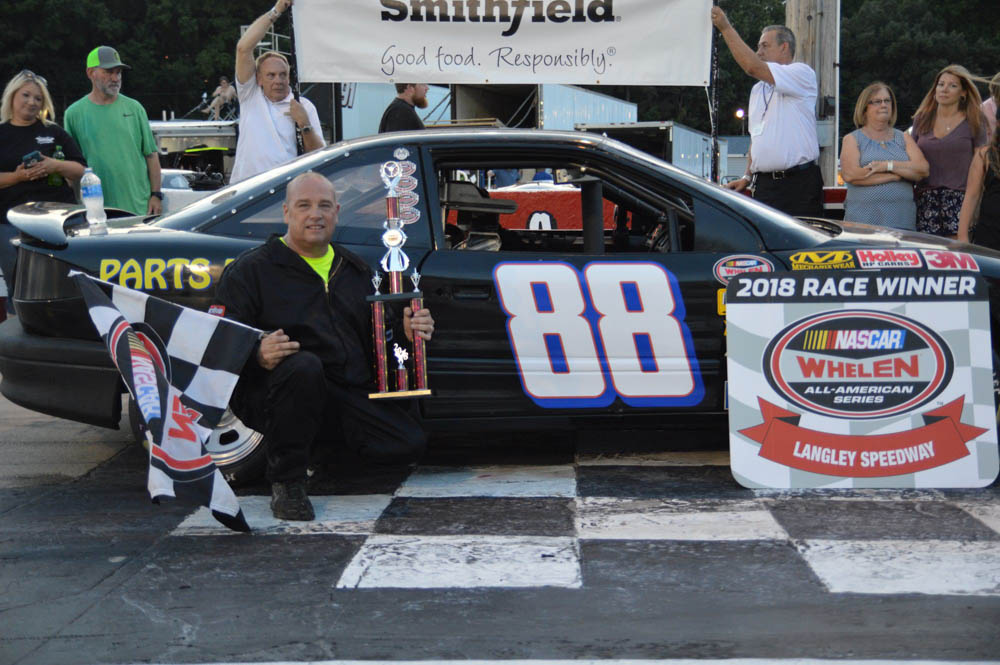 Carroll’s Automotive U-Cars 25 Laps: In U-Car qualifying, Charlie Bryant Jr sat his hot rod on the pole with a lap set at 19.052 seconds. Tommy Gildea would start to the outside of the pole sitter as the top two qualifiers. Green was shown to the field and the battle for the lead immediately ensued. The battle lasted one lap and was very intense as the pole sitter outlasted the charge of Tommy Gildea. Soon after though, the leader Charlie Bryant would open up at least an eight car length lead over Gildea. On back, Austin Davis was moving up through the field in third when the halfway went up on the board. But for the leader Bryant, nothing would even come close as he would go on to win the U-Car race feature. Charlie Bryant spoke in Victory Lane, “Had a really great time and a really great car as always, the Florian’s always puts together a great car”, expressed the race winner. “You know, I’m really not that good, its just a really good car, but were really having fun. Want to dedicate this one to my dad, four years ago we lost him, he went home to be with the Lord. I don’t know where else to be then right here in Victory lane at Larry king Laws Langley Speedway to honor him as I know he’s looking down here on us”.

Old Skool Video Games Super Streets 40 Laps: Landon Abbott continued his hot wheel in the 2018 Super Street division by picking up the race pole. His lap at 18.599 seconds nipped out the lap of Dale Parro in a start on the front row in second. Bill Eaker, Gordon Weeks and Jason Michaud were the five best in Super Street qualifying. Green was given to the pole sitter Landon Abbott who secured his race lead out of turn two. But the lead was not held long when contact not only knocked Abbott out of the lead, it knocked him out the race. Bill Eaker then took over the reigns as the race leader, Jason Michaud, Dale Parro and Sean Calway were the early hard charges all single file. Halfway saw much of the same but the leader, Eaker was not getting away. Battle for second soon began as Michaud had it, Parro wanted it, contact between the two and Parro took it. Then Parro settled in to pursue the race leader as laps were whining down but then the caution flew with just two laps to go. Back to the green, Eaker had position going into one when Parro couldn’t keep off the race leader who then spun to bring out another race caution. With Dale Parro as the new race leader, Sean Calway would chase the leader but nothing doing as Dale Parro would go on to win the Super Street feature. Dale Parro from Victory Lane, “Yeah, good call, they did bump me into him but I did try to stay away from him”, explained Dale Parro. “Like to thank a few people, Marty Strickland, just all the help he does for me. Weeks Construction, they’ve been helping me out here, Kenny’s Plumbing and Old Skool Video Games”. 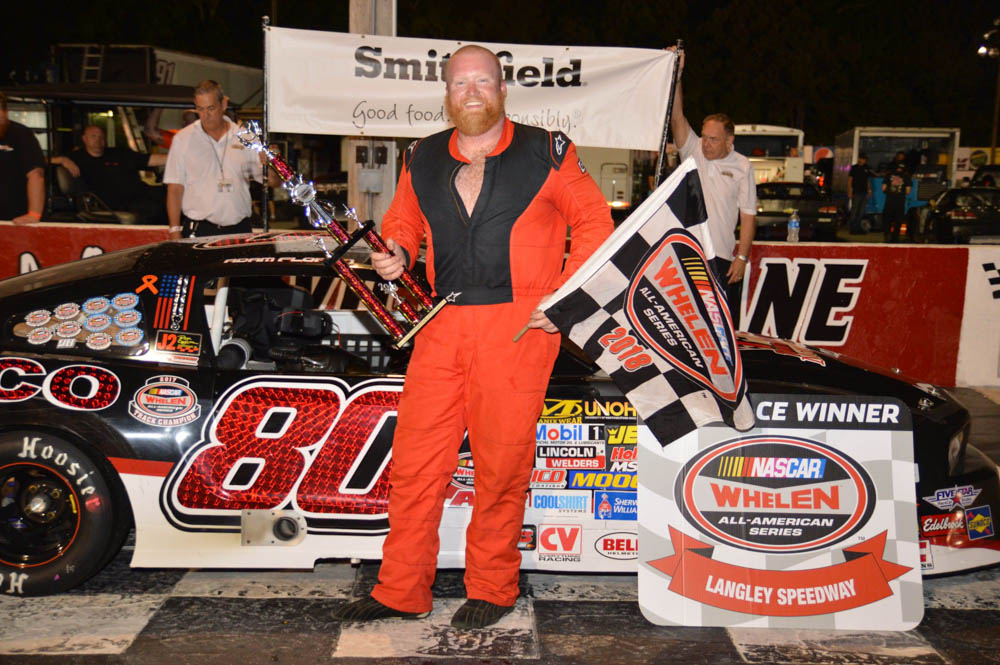 Riverside Paper Pro Six 30 Laps: Adam Florian continued his Pro Six division dominance by picking up the race pole. Posting a fast lap at 16.910 seconds which knocked off Bobby Hall but certainly worthy of the front row. Travis Wall, JB Sipe and Eric Schaffer had fast times rounding out the top five. Green flag waved and Florian would show the field into turn one. Up to the task from the outside was Bobby Hall who made it interesting and made Florian earn lap one of the event. Travis Wall was there to see it all in third but held tight while that battle concluded with Florian on point. Several laps in saw Hall mirror the line of race leader Florian and was able to keep the race leader well within his sights. Halfway was much of the same till Adam Florian began to build up a six car length lead and from there, Florian was looking for the checkers. Laps later, Adam Florian continued his charge and would go on to win his fourth Pro Six race feature on the season. Florian from Victory Lane, “It look like he (Bobby Hall) found something here this week, last few weekends he’s struggled a bit but he was definitely there tonight. Gotta thank my father, Tommy Spencer, Jeremy, my brother, everyone for helping me work on the car”. 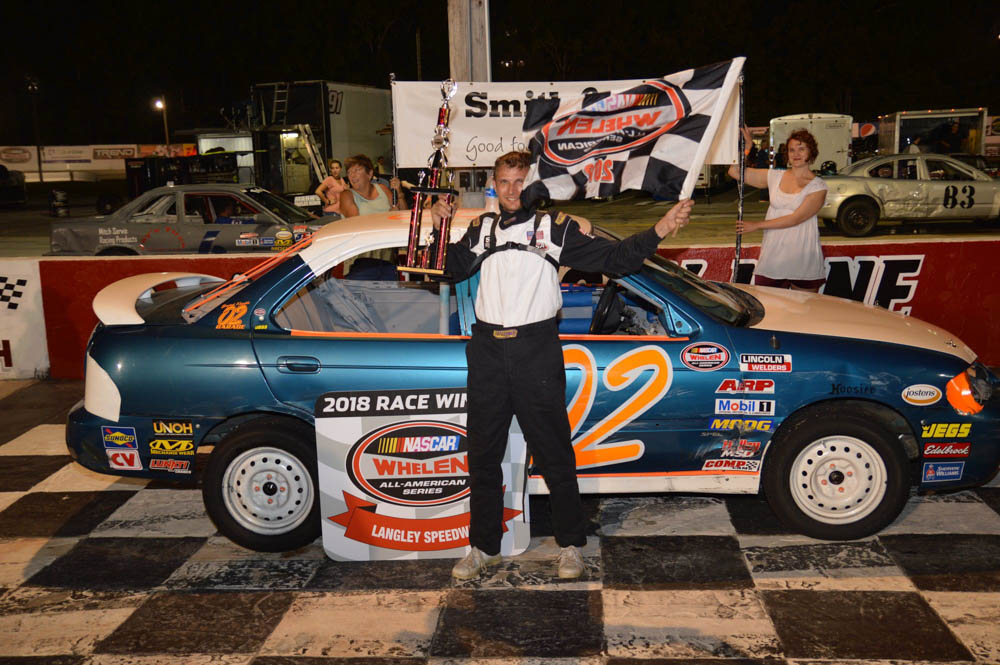 Bojangles Enduros 30 Laps: In the Enduro series action, Aubrey Pavik pulled the one pill to get the start on the pole with Bill Eaker in his first Enduro feature second. Green flag was waved and wasn’t long before Eaker soon found himself as the race leader. Ronald Klein soon ran down the race leader but on the move was Mike Joyner. Laps later into the mayhem, Mike Joyner soon took the race lead with Ronald Klein following his every move. But Joyner would not make a mistake and won the Enduro race feature. Mike Joyner in Victory Lane, “One of the most fun I’ve ever had in a race car”, claimed Joyner. “I saw the ninety five up on the scoreboard and I thought that I had him covered by a long shot but he was all in my mirror. I was like oh my gosh, he’s going to make me work for it. So, I just kept looking ahead, not wait for nobody, man I had a blast, just want to thank the Lord Jesus”.