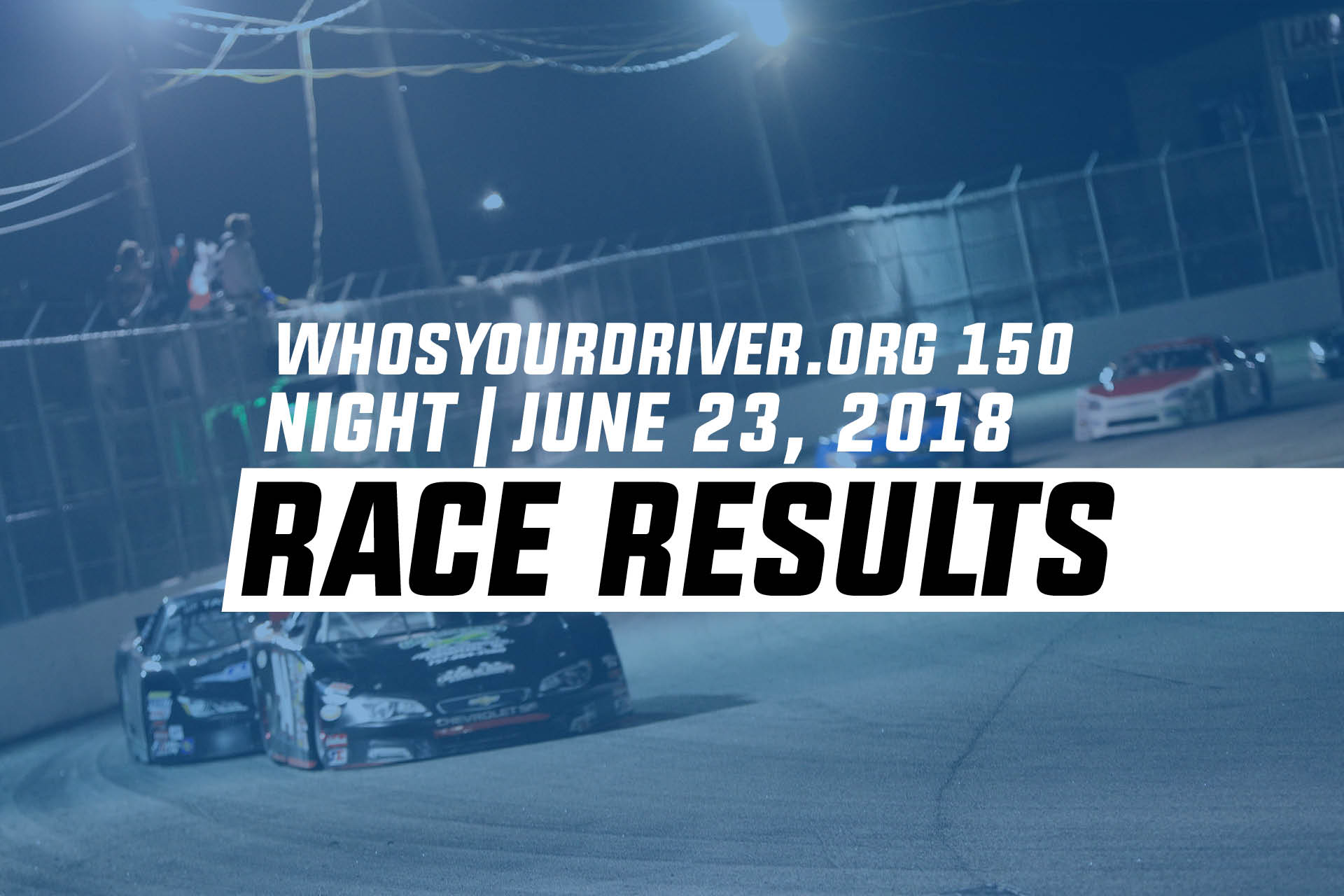 Hampton, VA (6-23-2018) Back once again to battle on the low banked .397 oval at Larry King Law’s Langley Speedway was the NASCAR Whelen Modified Tour. Twenty seven participants of the highly popular race division would look to add Langley Speedway to their win list. Coming in with the hot wheel was Jon Bonsignore who had already claimed three of the five races so far in the series. Ryan Preece would make his Langley Speedway return in search of his first ever win at the track. Other top contenders on hand was Craig Lutz, Chase Dowling and last years race winner Timmy Solomito. Also, to make the evening even better, the ERA Realtor Winged Champ Karts, Carroll’s Automotive UCars, Riverside Paper Pro Six and Old Skool Video Games Super Streets. All divisions are in heated point battles and there’s always someone new looking to smile big in Victory Lane, here’s a recap of all the exciting racing. 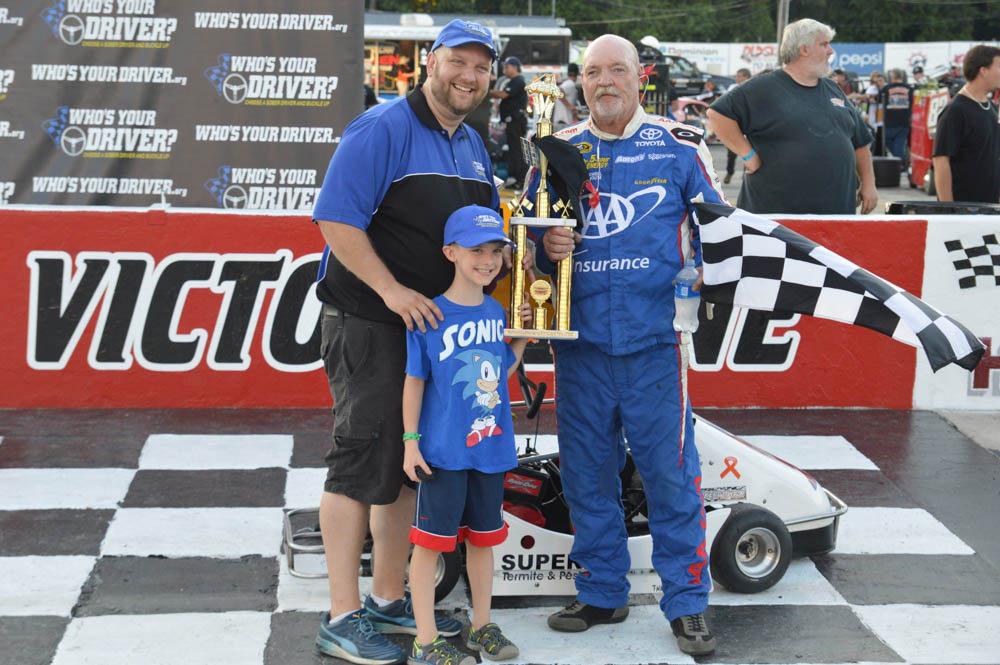 ERA Realtor Winged Champ Karts 20 Laps: Garry Osbourne would once again find himself on pole for the second straight week. Osbourne’s lap at 23.275 seconds set the field with Tillman Heuer in a share of row one. Jeffrey Johnson, Aaron Leach and Harry Leach were the divisions fastest in qualifying. The green flag was shown to the grid and pole sitter Garry Osbourne quickly established his race lead. After an early race caution, racing resumed with Osbourne showing the way and Jeffrey Johnson on his rear bumper. Harry Leach, Tillman Heuer and Aaron Leach was just kart lengths behind in pursuit of the leaders. Halfway into the race was a much different story as Osbourne and Johnson had wheeled away from the field all alone to decide the race feature. Latter stages of the race saw Jeffrey Johnson searching for ways around the race leader but Garry Osbourne was having nothing of it. Osbourne would go on to win the Winged Champ Kart feature. Osbourne in Victory lane, “I was kinda weary but I knew Jeffrey was pretty dedicated to me and I gotta thank him for driving me clean. Also, gotta thank my sponsors, Superior Termite Pest Control, Tidewater Compact and all the guys at the shop. Finally got it done, probably the oldest one to ever win in a Winged Champ”. 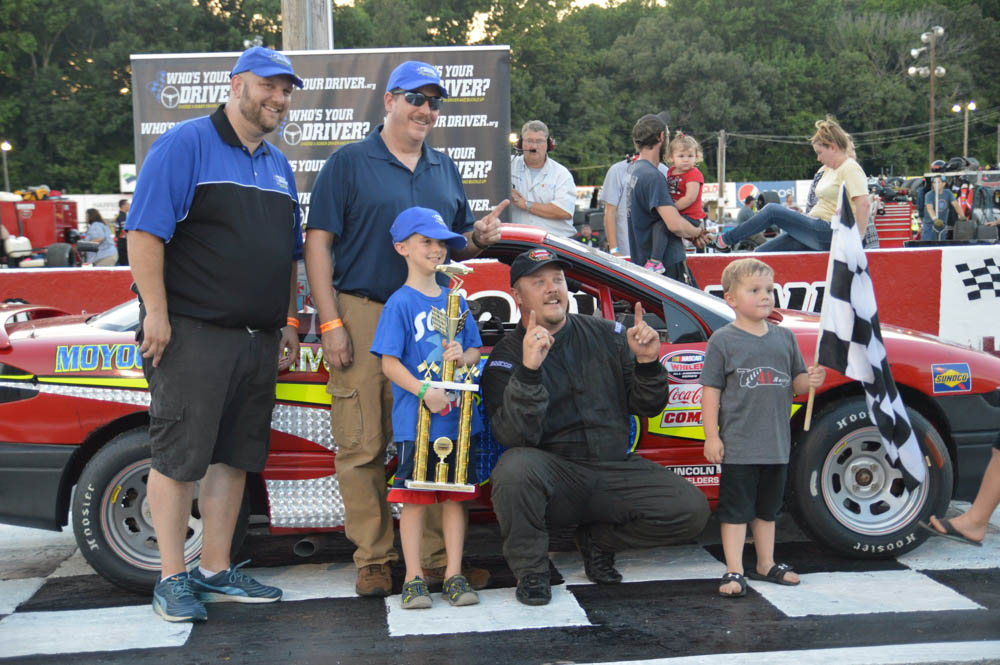 Carroll’s Automotive UCARs 25 Laps: In UCAR qualifying, Colby Vance put his hot rod on the pole with a 19.247 second lap. Richard Ellis earned his spot on the front row followed by competitors Austin Davis and Tillman Heuer. When the green was given, pole sitter Colby Vance showed the field into turn one but it was Richard Ellis from the outside that would lead lap one. Several laps into the race saw Ellis build up a five car length lead but soon after, Colby Vance stated to reel the leader on in. When the halfway came and went, Vance had narrowed the race lead by one length. For several laps, Colby Vance would give the race leader a go, even got to the rear quarter but race leader Richard Ellis would hold on to win the UCar feature. Ellis from Victory Lane, “First of all I gotta thank Courtney, Michael and Dean Shifflett. My car was down the forty one Golden Coral car so they put behind the wheel of the thirty six. This thing is a night and day difference, its amazing. Just want to thank all the fans, the Whelen Modifieds, my family and my son, this is the first ever win I’ve gotten for him”. 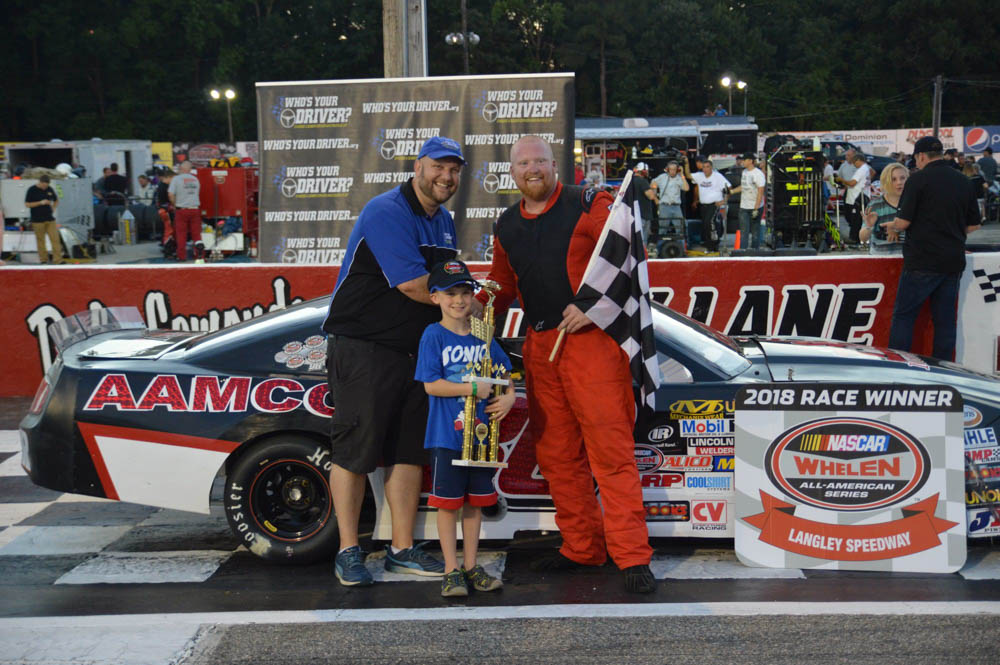 Riverside Paper Pro Six 30 Laps: To no surprise, Adam Florian’s stellar race season continued by taking the Pro Six pole position. Pacing the track at 17.212 seconds, his lap bettered the lap of Travis Wall who was just seven thousandths off the pole speed. Bobby Hall, JB Sipe and Jared Clarke were the series quickest in Pro Six qualifying. Green flag waved and like a shot from a cannon, Adam Florian took off. With just a handful of laps in, Florian had easily mounted a half a straightaway lead courtesy of a great battle for second between Travis Wall and Bobby Hall. Just shy of the halfway, the race had its first caution which was what second place runner Travis Wall needed. Restart saw the race for the lead come into play as leader Adam Florian was taken from the outside by Travis Wall. New race leader Wall enjoyed his position at the front but only for a few laps when Florian had a fender to the leaders inside. But then the caution flag came out to halt the race action. Back to the green, the side by side battle continued as Travis Wall eventually established position on point. Well past the halfway, Adam Florian was able to get by Wall to retake the lead and open up a four car length lead as laps were whining down. Travis Wall would close in on the lead but ran out of laps with Adam Florian back in Victory Lane. Florian from Victory Lane, “Yeah these cars out here (Modifieds) put down a lot of rubber and wide out on the turns. The wheelbase on those things look wide as heck so I don’t know. You got a lot of rubber out there on the bottom and top groove, woo, that was a good race. Always racing with Travis has been good, we know how to rough each other up and not wreck each other”. 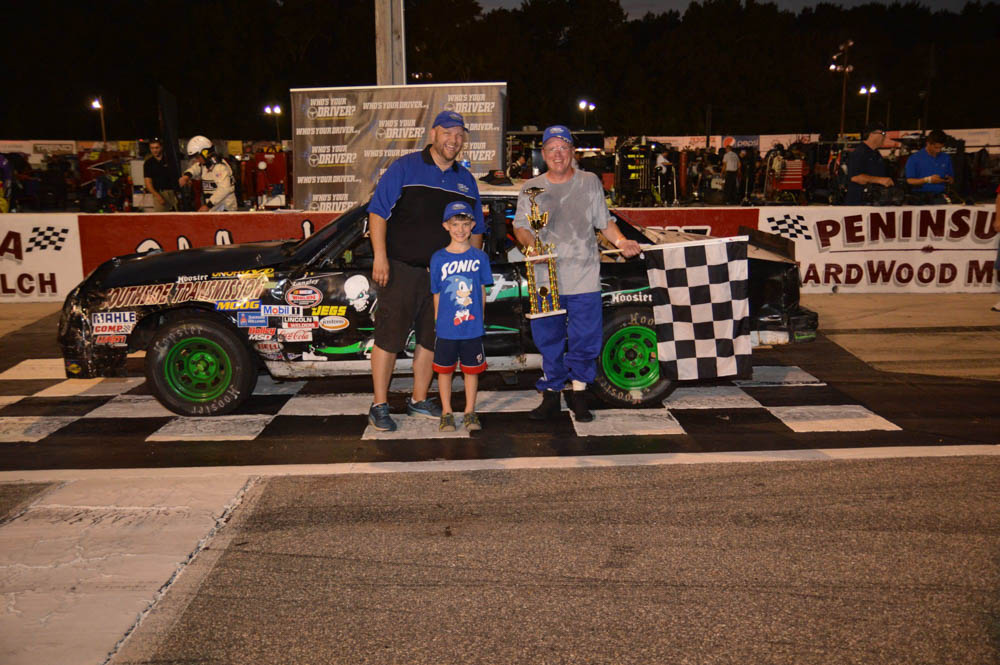 Old Skool Video Games Super Streets 40 Laps: Dale Parro began Super Street competition by locking down the race pole. Posting his fast lap set at 18.810 seconds handedly took Jason Michaud’s lap but deserving of a start on row one in second. Bill Eaker, Dale Nichols and Randy Akers all had speed as the five best in the afternoon time trials. Green flag was given to the field and into turn one did Parro show the way. While Parro secured the race point, on back saw Dale Nichols, Bill Eaker and Randy Akers jockey for spots second through fourth. Nichols soon was alone in second who then turned his sights to the leader. Top four cars just before the halfway were all racing within a car length of each other. Parro would distance himself for a moment but back would Nichols collapse the race lead. Past the halfway in the race was much the same but then race traffic came into play. This time, Nichols seemed poised to benefit but nothing was doing as the race leader Parro cleared traffic and began to set sail. Misfortune later in the race for Nichols courtesy of a lap car which allowed Eaker to take the two spot leaving Nichols in third. From there, Parro had no issues getting to the stripe first and picked up the Super Street race win. Parro from Victory Lane, “Yeah, I had to redeem myself from saying I had a cheated up carburetor last race, so I put it to they’re (butts) this time. Like to thank Marty Strickland for one, thank Week’s construction group, they help me every Saturday and Southside Transmissions”. 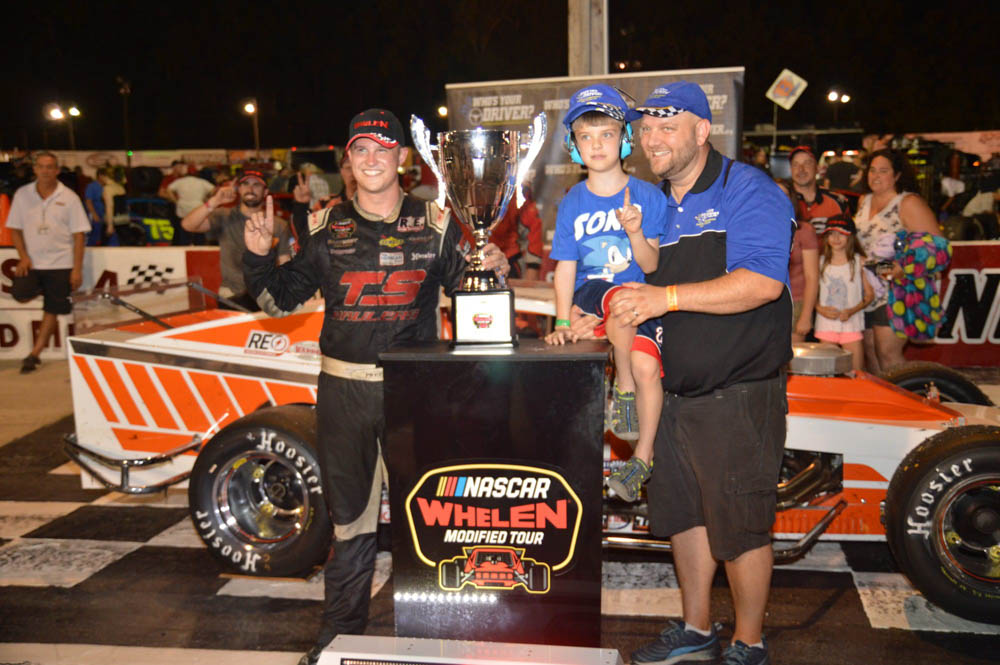 NASCAR Whelen Modified Tour 150 Laps: Ryan Preece collected the race pole in Whelen Modified Tour Division. His lap at 15.046 seconds bested the effort given by Matt Hirschman who was just thirty eight thousandths off the pole speed in a share of the front row. Second in series points Craig Lutz earned the three spot followed by Chase Dowling and Justin Bonsignore to complete the top five. Notable qualifier Timothy Solomito who was last years race winner would get the sixth place start on the grid. Green flag was shown and from the outside row one starting spot, Matt Hirschman would lead lap one. Pole sitter Ryan Preece was slow to get going but quickly recovered who soon found his way back to second in the early laps of the event. Chase Dowling nabbed up a couple of spots early in the run running third as did Timmy Solomito breaking into the top five. Laps later, Ryan Preece took a turn as the race leader as did the races first caution period. Back to the green, Preece would continue as the race leader and making good on his restart would be Chase Dowling to take second. But just as soon the leaders would get settled in on another green flag run, the race was halted from its second caution. With the green waving again, Ryan Preece nails his restart but so did Chase Dowling and from the outside, Dowling took the lead. While cruising in the lead, navigating through the slower traffic, the race had its first twist when a slower car spun in front of the race leader. Dowling was able to miss the spinning car and retain the lead but when the race resumed, Ryan Preece was better on the restart and regained his race lead. Making up ground and taking advantage of the many restarts saw Justin Bonsignore up to second. Chase Dowling, Doug Coby and Matt Hirschman were solid third through fifth when the race caution returned to the event. On the ensuing restart, Preece easily secured his race lead when the century mark of the race went on the board which also served as the break period of the race for tires and fuel. Cars that did not come to pit road would earn the top spots on the grid after the break handing the race lead to Tommy Catalano. Back to green flag racing and entering into the latter stages, the racing soon became intense as the leaders beat and banged in taking advantage of the fresh tires. Emerging as the race leader would be Justin Bonsignore followed by Eric Goodale when once again, the race was stopped from another race caution. Green flag racing was back on the track with Bonsignore as the leader. Preece would make several attempts but the leader would hold on. Laps later, back again would Preece go after Bonsignore, this time Preece get the spot and retakes the lead. From there, Ryan Preece would get through race traffic untouched and go on to win in a Whelen Modified thriller. Preece from Victory Lane, “Finally”, claimed race winner Ryan Preece. “Came here twice for the Southern Tour, we lead a lot of laps but were nothing at the end. We’ve been doing our homework, we’ve been trying to be good on both the 630 and the 500. It seems like we really found a pretty good balance for both and I’m super excited. It was a helluva race with Justin, he did a great job, he was definitely protecting the bottom. Our car was so good for those first twenty laps, I knew it was going to even out so I knew I had to get by him. We did the long drive last night and not much sleep so this is going to make that ride home a little easier”.