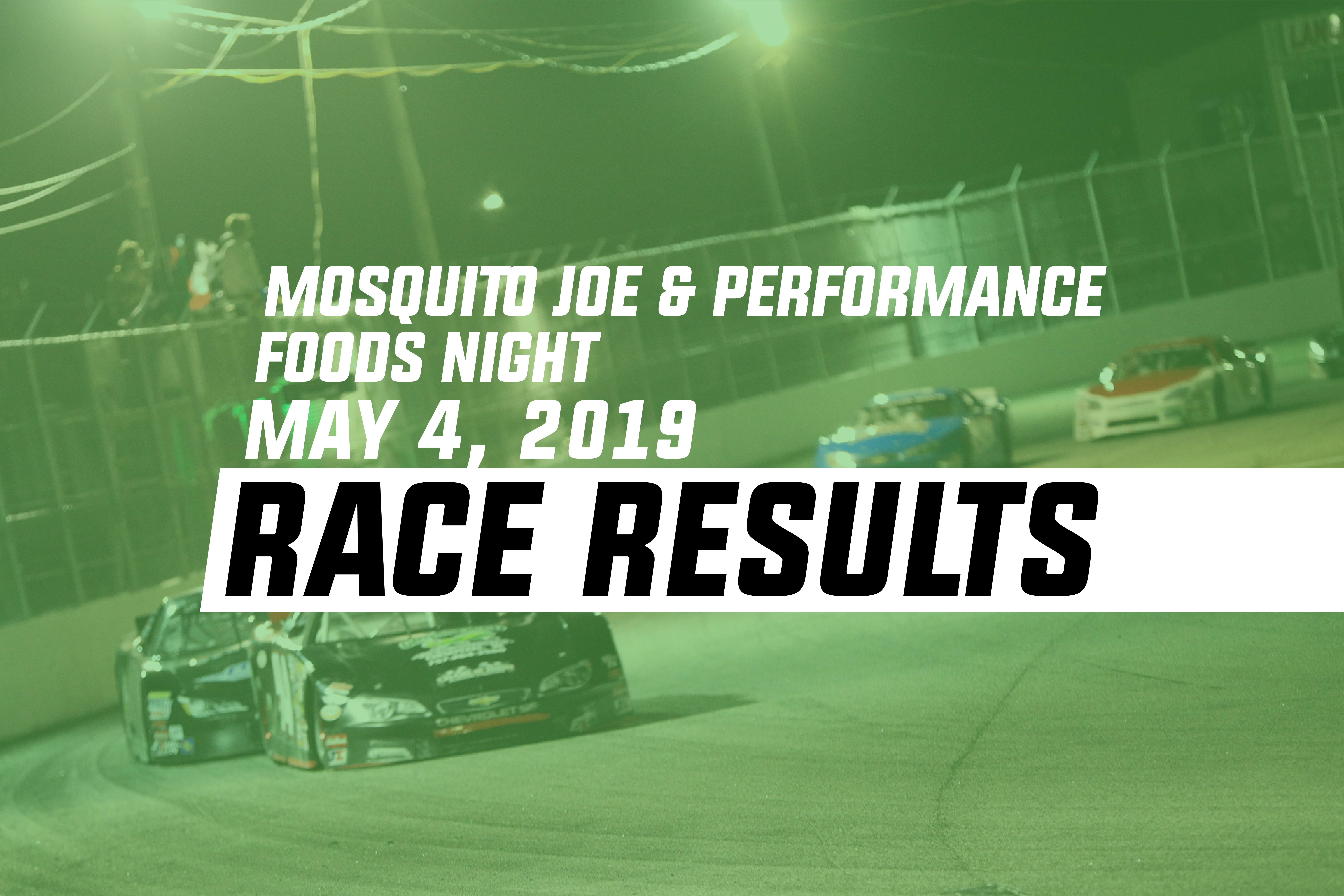 Hampton, VA (5-4-19) With the warmer summer like temperatures well on the rise, so were many of the competitors in each race division looking to capitalize on the early success. At this point in the long 2019 race season, some of the racers have clearly identified themselves as the teams to beat while others are so close in making their move. In this week’s race action, Cycle City Corp Bandoleros, Cycle City Corp Legends and Bojangles UCars were on the schedule to do battle. Also, on hand were the Harris Truck Shop Super Trucks, Pepsi Grand Stocks and the Taylor Waste Services Late Models. What typically comes along with the rise in temps comes a lack in racer patience, here’s a recap of how each race played out. 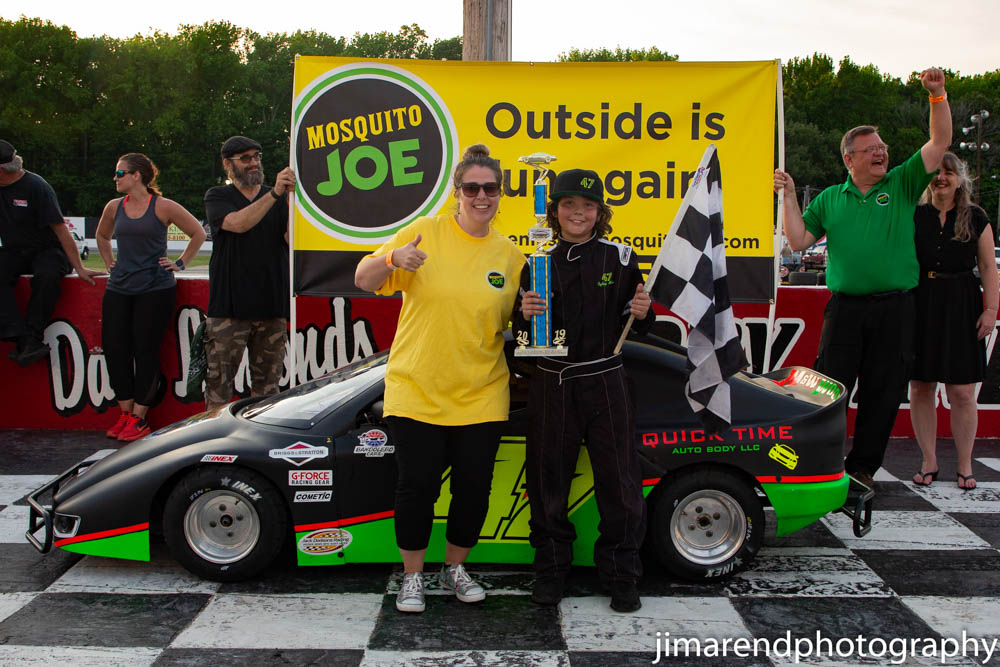 Cycle City Corp Bandoleros 15 Laps: In the highly competitive Bando series, Ryley Music collected his third pole of the season with a 21.150 second lap. Jacob Derrick would get the two spot on the grid as points leader Wyatt Philyaw, Logan Clark and Aaliyah Paynter made up the Bando series five best. Green flag started the evenings racing and emerging from turn two with the lead would be pole sitter Ryley Music. Laps later the pole sitter soon looked behind him to notice a twelve car length lead over Wyatt Philyaw and Jacob Derrick. Halfway, Music continued to lead but while second and third place battled for position, ground on the leader was not being made. Jacob Derrick tried all he could to get by Wyatt Philyaw but could not get it done. Meanwhile, Ryley Music goes flag to flag for the race win, Music from Victory Lane. “Yeah, every time we come out here, we have a fast race car. Last season we really didn’t have the car to win but really, this season its that good of a car. Just want to thank all my sponsors for helping out, my family, my grandfather, my grandmother, I just love to thank everybody”. 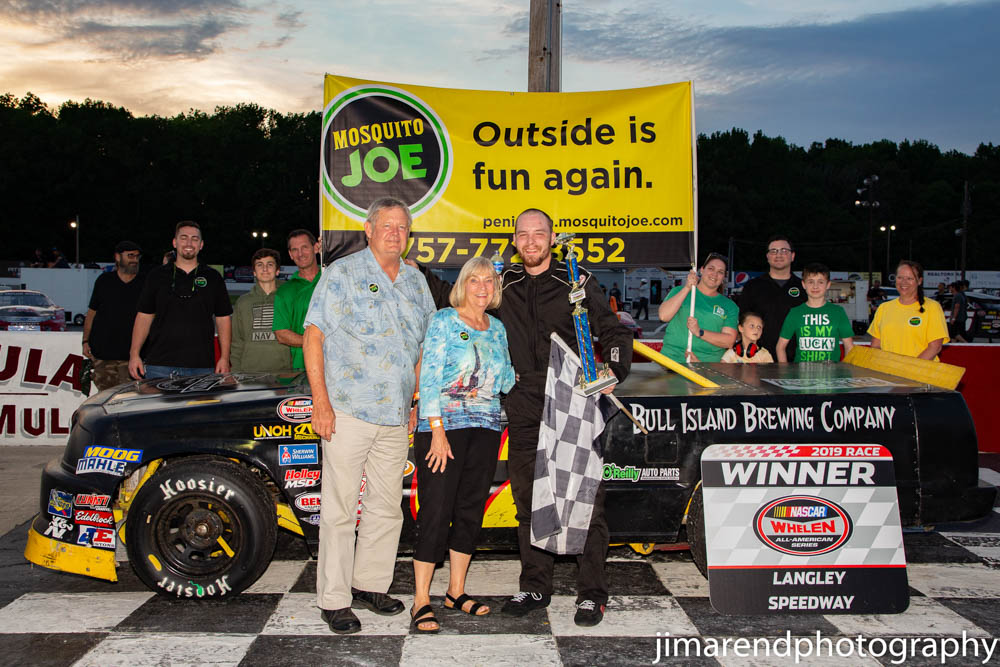 Harris Truck Shop Super Trucks 25 Laps: Chase McAdams was back on pole showing off his 19.203 second lap. Ronald Klein narrowly missed the pole by twenty five thousandths but easily solidified his spot on the front row. Shannon Lester, Rick Poust and Keith Wheeler rounded out the Super Truck series best in qualifying. Green flag waved as the battle for the lead was on as outside row one starter Ronald Klein and pole sitter Chase McAdams went side by side, traded the lead before finally McAdams securing the spot. Meanwhile, Shannon Lester and Keith Wheeler watched it all hoping for a miscue by the leaders but that miscue never came. Once single file, McAdams began to pull away from Klein to an eight truck length lead. But just after the halfway, the race had its first caution when Wayne Lyons and Paige Cain got together. Back to the green, McAdams would drive his ride into turn one a little deeper to secure his race lead. Avoiding the efforts of Ronald Klein, Klein soon went around to bring out the second caution of the race. Green flag was back waving again and Chase McAdams wasted no time as Shannon Lester would give chase. Rick Poust who was running third soon fell into the clutches of Ronald Klein and Keith Wheeler who had to start from the rear from the last caution. But back up front, McAdams had his ride on rails and would cruise to victory in the Super Truck division. Chase McAdams had these words to say, “Oh yeah, it was on a rail again”, said the race winner. “We made a sway bar adjustment, it was a little bit tight in qualifying then she went back on rails. Got a little free at the end of the race as I was just holding on. Can’t thank Marty Strickland, my dad, the track, Bill, Chuck and Harris Truck Shop for sponsoring the division”. 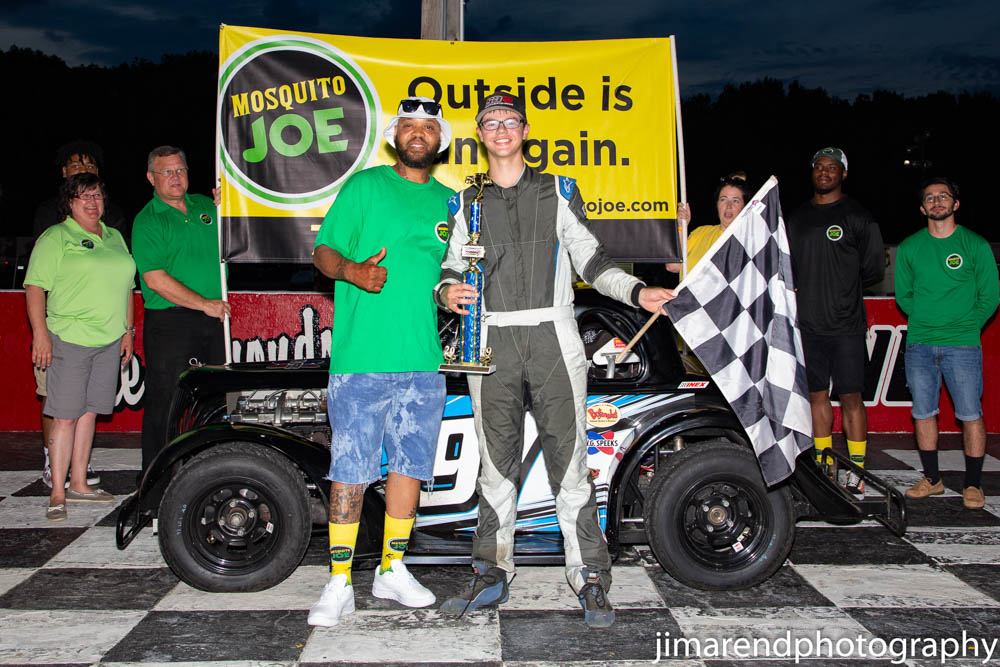 Cycle City Corp Legends 25 Laps: Daniel Silvestri bested the series points leader Ryan Matthews for the pole. Silvestri’s lap recorded in at 18.031 seconds to set the grid with Connor Jones, Spencer Saunders and Devon Courtney rounding out the top five in qualifying.Green flag would wave to the field and around to lead lap one would be Daniel Silvestri. Second place starter Ryan Matthews didn’t get the start he wanted losing a couple of positions to fourth. But on the move and seeking the race leader was Spencer Saunders as the early laps were on the board. Laps later both Silvestri and Saunders checked out away from the rest of the grid as Matthews, Jones and Courtney were the top five at the halfway. With the field strung out single file, the best battle was found at the front as Spencer Saunders lurked at the every move of race leader Daniel Silvestri. Laps later, race traffic played a role allowing Saunders to catch, pass and lead a lap before Silvestri got it back with just two laps to go. From there, Daniel Silvestri would hold off the charge of Spencer Saunders to win the thrilling Legend series feature. Silvestri had this to say, “Yeah, it took a little longer than I wanted to. We’ve had great speed all last season and this season, that racing with Spencer was so much fun. I was worried he was going to come in there and smash me but it’s great racing. He’s clean, he’s a great racer and I just can’t thank my sponsors, my dad, the Lord, just can’t thank Bojangles enough for what they do”. 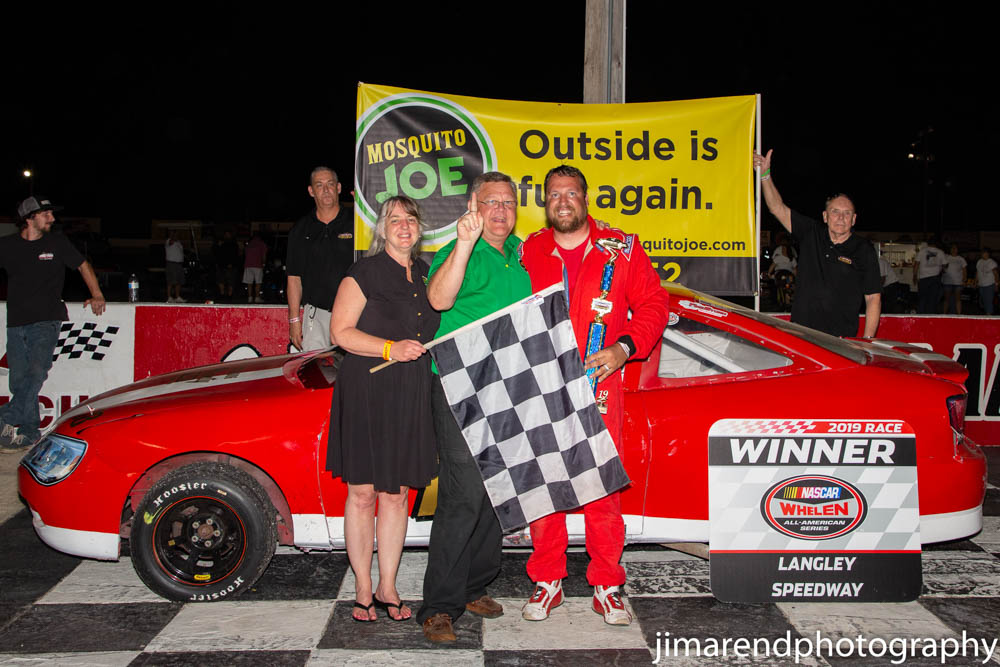 Bojangles UCars 25 Laps: Rookie Mike Farley picked up the UCar series pole by posting a 19.175 second lap. Austin Davis was just as sporty earning a share of the front row with series points leader Brandon Wood starting third, then Dean Ballew and Cameron Ruggles making up the five best in UCar qualifying. Green flag was on the grid and leading lap one from the outside row one spot would be Austin Davis. Pole sitter Mike Farley who wished for a restart to the race quickly regrouped and soon haunted Davis’s every move. But soon would come Brandon Wood who has had the hot wheel in the division passing Farley for second as the races first caution flag waved. Back to green flag racing saw Brandon Wood take away the race lead from Austin Davis. Davis who was forced to settle for second soon had a mirror full of Cameron Ruggles when two laps later the second caution period came when Dean Ballew went around. After a series of race cautions, the halfway soon came with Brandon Wood as the leader. Austin Davis, Cameron Ruggles, Dean Ballew and Mike Farley were the top five headed into the latter laps of the race. Davis would reel in the leader back to a three car length lead but that would be as close as Wood would allow. From there, Brandon Wood wins the UCar race feature. Wood from Victory Lane, “I gotta tell ya, Mike was putting up a good run and I was kinda nervous to dive to the inside of him. My spotter Chris said it was now or never so I took it, got by him and Austin, I almost got into the side of him. Woo, Cavaliers that’s what I’m talking about baby”. 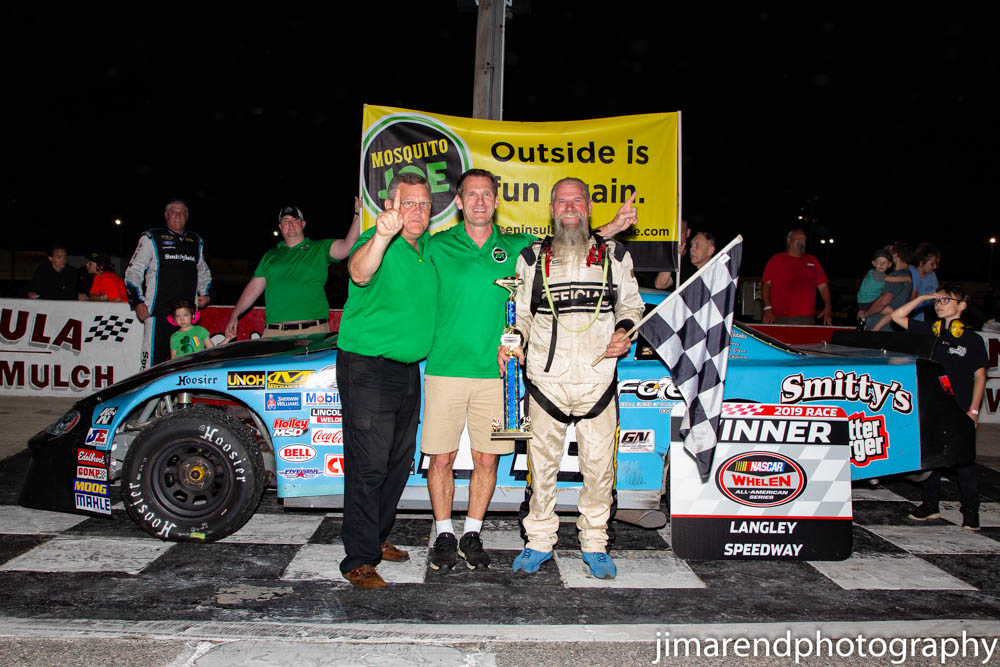 Pepsi Grand Stocks 40 Laps: Brandon Hinson put his hot rod on the Grand Stock series pole with a lap set at 18.076 seconds. Sammy Gaita was just four thousandths of a second off the time set by the pole sitter and obviously starting second on the front row. Tim Wilson, Paul Lubno and Michael Waters were the afternoons Grand Stock elite in qualifying. Green flag racing was on the speedway and leading lap one would be Sammy Gaita from the outside. Pole sitter Brandon Hinson would give the leader a go for one more lap before tucking underneath single file. Paul Lubno, Kevin Morgan were solid at this point running third and fourth but back up front it was still Sammy Gaita showing the way. Tim Wilson who was second began nipping away at the lead of Gaita but soon had his hands full of Lubno wanting the spot. Best battle on the track as the halfway neared was when Kevin Morgan passed Michael Waters for fourth. In his groove and hitting his marks was race leader Sammy Gaita but coming was Tim Wilson who once again was nipping at the lead and closing it down to three lengths just pass the halfway. A series of cautions slowed the race before another green flag run was made. Race leader Gaita nailed his restarts to maintain the lead but lurking just behind was Tim Wilson as the latter laps of the feature ensued. Green flag would wave once again as Gaita wins the hole shot to secure the lead. But soon came Tim Wilson to challenge for the lead when contact occurred sending race leader Gaita around. With Gaita out, Wilson sent to the rear, Lubno inherits the lead. Green flag waves and surviving the carnage, steering clear of trouble, Paul Lubno goes on to win the Grand Stock feature. Lubno from Victory Lane, “There was a whole lot of contact tonight, Kevin Morgan had a good run, Id say we had some fast cars. Sammy Gaita, glad he’s ok, feel bad for him and his car getting tore up and Tim Wilson had a fast car too. So, the class is really competitive and I hope we can get the car count up”. 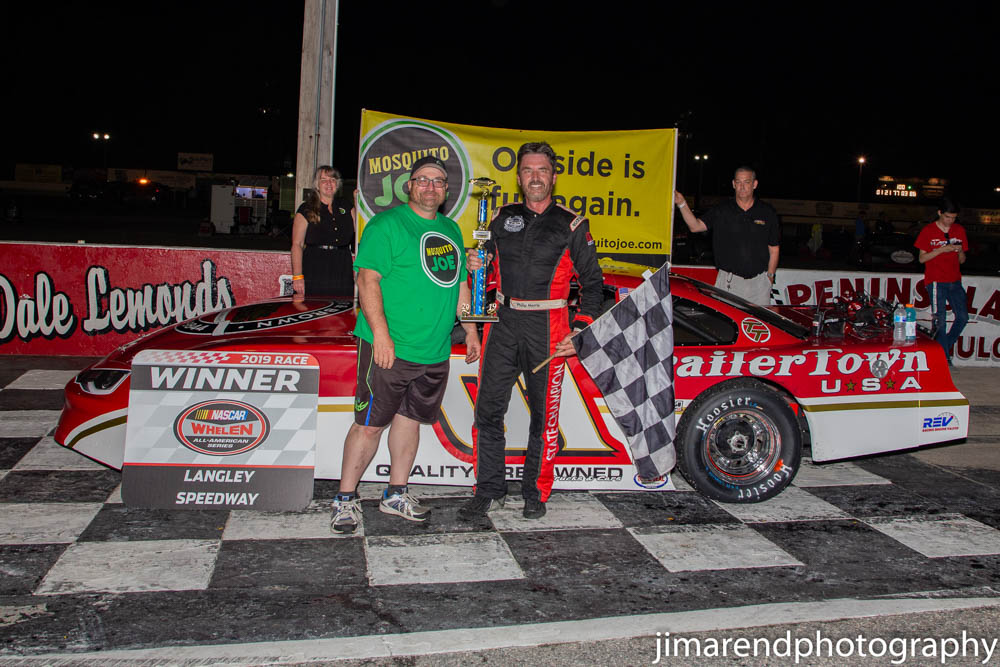 Taylor Waste Services Late Models 100 Laps: Phillip Morris made his return to Larry King Law’s Langley Speedway known by claiming the series pole. The lap time was set at 15.768 seconds with Brenden Queen taking the second starting spot. Greg Edwards, Danny Edwards and the series points leader Connor Hall completed qualifying’s five best. Flagman Shane Snyder showed the green flag as pole sitter Phillip Morris showed the grid into turn one. But out of turn two comes Brenden Queen to battle for the lead but nothing doing and eventually settled into second in chase of the leader. Connor Hall picked up two spots showing third as Greg Edwards and Thomas Marks were the early top five. Race leader Phillip Morris was off to a fast pace putting distance between himself and Brenden Queen before Connor Hall passed Queen for second. Laps later in the green flag run saw Greg Edwards take third when finally the race pace settled with everyone now in their grove and hitting their marks. At the halfway, Morris continued to lead as lap traffic gave and took away the distance Connor Hall needed to collapse into the lead. Clearly in tire conservation mode and preparation for the latter stages of the race, so far, a tame green flag run. Laps later saw Greg Edwards making his move for second as it was time to go if you got it. Several laps, side by side, Edwards tried to make the pass and eventually did but up front, Phillip Morris had checked out. From there, the lead was to much and the race caution never came, Phillip Morris goes flag to flag for the race win. Morris had this to say. “A win here at Langley is so special”, said the race winner. “After what happened to the car the last time we were here, thank Herb nation, Travis, Forest and everyone at Forrest Reynolds Racing for getting this thing back together. It had a few hiccups during the race but all in all it was good as it ever has been”. Darrell Poe did a great job on this motor, good and fresh and it showed, were about ready for the Hampton Heat”.