Highlighting an exciting night of racing and making the trip on its 2017 race schedule at the .395 mile oval was The Virginia Sprint Series. The lightweight, winged Sprint Cars were a sure bet to produce speeds not often and rarely ever seen at Larry King Law’s Langley Speedway. Also in race action were the Trip Anderson Realtor Winged Champ Karts, Carroll’s Automotive UCARS and the Harris Truck Shop Super Trucks. On the evenings race schedule included Old Skool Video Games Super Streets followed by the much anticipated Fireworks display to conclude the evening. Fast speeds, close racing and lighting up the skies made Larry King Law’s Langley Speedway the place to be. 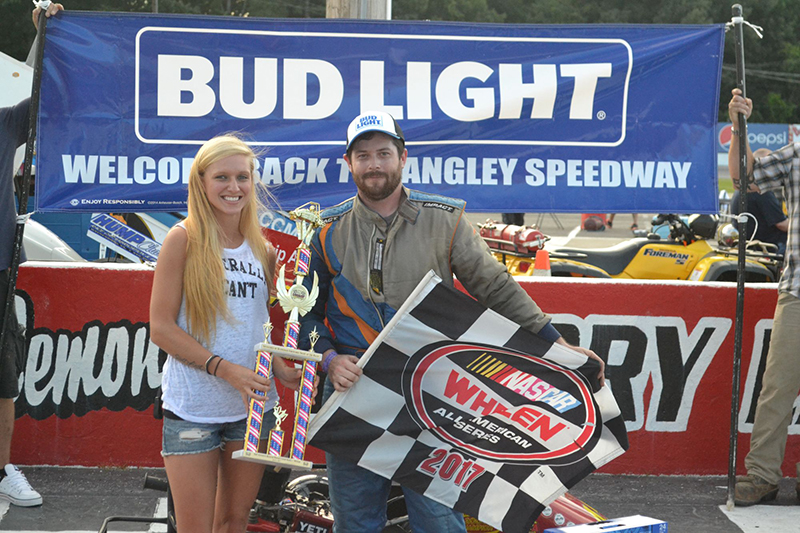 Trip Anderson Realtor Winged Champ Karts 20 Laps: Aaron Leach was quickest this week in the afternoon time trials, blistering a 23.088 second lap to earn the top spot on the grid. Brandon Lorah’s lap which was equal in effort but just short on speed yet worthy of a share of the front row would start second. Garry Osbourne, Tillman Heuer, and Danny Millard were the five best in the twenty one car field. Green flag waved to start the evenings racing and emerging as the early race leader was pole sitter Aaron Leach. Garry Osbourne would lock bumpers early, drafting the leader and mirroring his every move. On back, Danny Millard with Robert Pellek were able to stay with the leaders but by halfway, the leaders were able to get away. Final laps in the event saw Osbourne able to sneak a peek underneath but couldn’t get it done as Aaron Leach would cross the stripe first. Aaron Leach was in Victory lane, “We made some changes and everything worked”, expressed the race winner. “I cant thank enough Bill Mullis for buying this race track and actually run one of his karts. Everything this year is for my nephew, everything that’s been going on, let’s go win another one”. 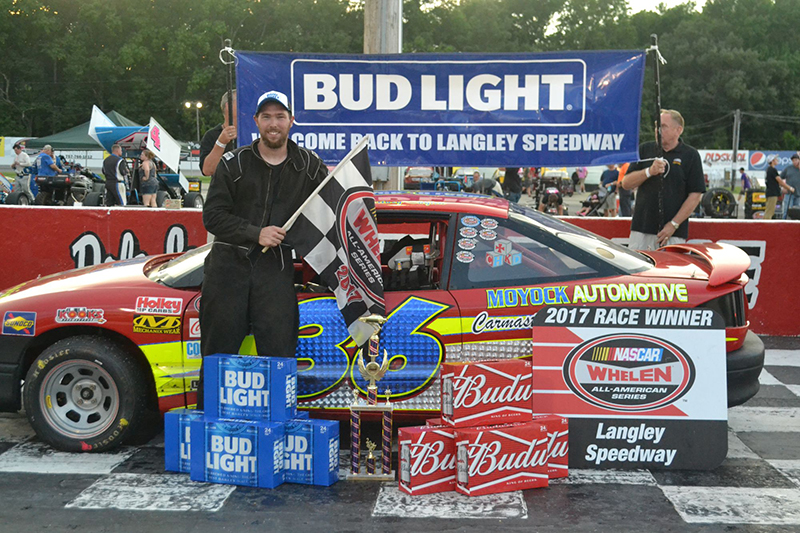 Carroll’s Automotive UCAR’s 25 Laps: Michael Waters continued to impress by collecting up his third pole on the season, clocking in at 19.217 seconds. Jesse Jones would start shotgun to the pole sitter looking to cool off Waters who otherwise has dominated the UCAR race division thus far. Green flag was in the air and the pole sitter Michael Waters would pull the field into turn one. Securing the point out of turn two was Waters with Jesse James in tow, Eric Schaffer and Tommy Gildea would battle early for third. Halfway, Waters continued to lead but eyes were on Schaffer and Gildea who was still trying to settle the three spot on the grid. Jesse Jones continued to give chase but nothing was doing against the hot wheel of Michael Waters who would go on to win his sixth straight at Larry King Law’s Langley Speedway. Waters had this to say in Victory Lane, “Yeah, Ive been sweating in the car even before we took the green, it’s been hot all day”, claimed Waters. “Like to thank Moyock Automotive, Courtney, it’s her car and not mine. Just like to thank Dean Shiflett, he built one heck of a car and all the fans tonight”. 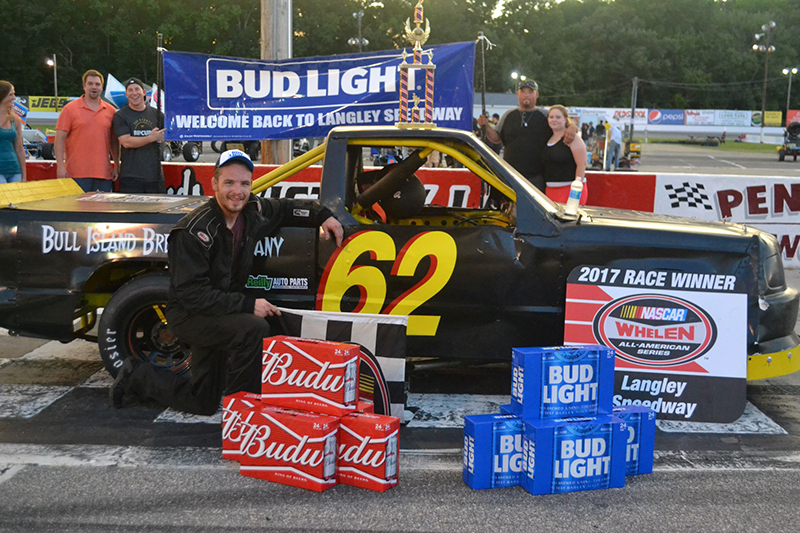 Harris Truck Shop Super Trucks 25 Laps: Chase McAdams collected the race pole in afternoon qualifying with a 19.368 second lap. Ronald Klein was just thirty thousandths off the pole speed and would start with McAdams in row one. The green flag was displayed to the field and pole sitter Chase McAdams would lead in the early goings of the race. Dustin Mullins from the three spot on the grid would take second with sights soon on the leader. Soon after, the race leader would encounter lap traffic and would get tangled momentarily which was all Mullins needed to take over the race lead. After a brief stint up front, McAdams was able to track down Mullins, pass for the lead and go on to win his first race of the season. McAdams from Victory Lane, “Awe yeah man, it’s been a rough year but it took a lot of hard work”, shared the race winner. “Dustin, I thought he had me but started reeling him back in after we caught up to that lap car, hopefully we can get back here again (Victory Lane)”. 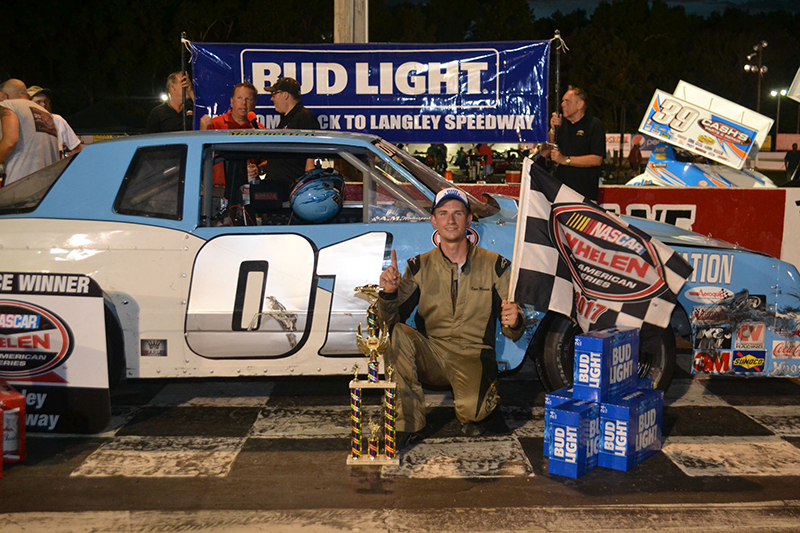 Old Skool Video Games Super Streets 40 Laps: Renno Marchetti IV picked up his third pole on the season clocking a lap at 18.935 seconds. Randy Akers would occupy the two spot on the grid as Sammy Gaita, Jason Michaud and Landon Abbott were the five best who took time. Green flag race action began with the pole sitter showing the way into turn one and setting a blistering race pace as the leader. Randy Akers and Sammy Gaita would settle the two spot with Akers getting the position. But for the race leader, ten car lengths were quickly established before a series of cautions bunched back up the field. Halfway in the feature saw the charge of Landon Abbott with Sean Calway but up front, it was all Marchetti and unchallenged. Final laps saw a green white checker finish along with an exciting finish between teammates Landon Abbott and Renno Marchetti. Marchetti would survived the bump and run attempt by Abbott out of turn four to go on for the race win. Marchetti spoke in Victory Lane, “I tell you what, it’s a blessing to have a teammate that good because he makes me better and I make him better”, said Renno Marchetti. “To hold off a late charge from him I knew I earned it then”. 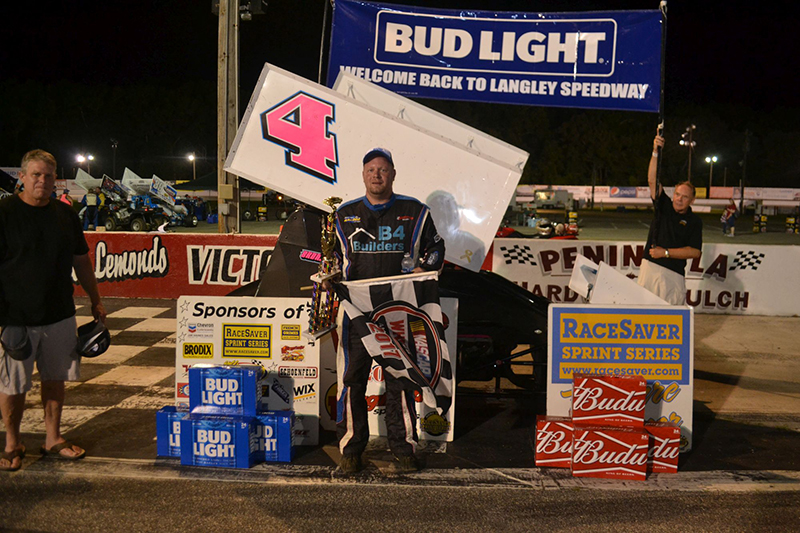 Virginia Sprint Cars 30 Laps: Bronzie Lawson was fastest in the Virginia Sprint Series qualifying blistering a fast lap set at 14.011 seconds. The lap easily established the pole but VSS officials would give Lawson the eight spot in the field. Green flag would wave to the sixteen car field and the early race leader was Jerald Harris. On back, Mike Leraas and Michael Keeton would battle for second with Leraas finally getting the spot. But trouble came for the leader who would tangle with a lap car ending his dominate run so far in the early portions of the race. Leraas would assume the race lead but the man fastest in qualifying was coming as the halfway approached. Shortly after, Bronzie Lawson would easily take the lead from Leraas and from there, Lawson would cruise to victory at Larry King Law’s Langley Speedway. Bronzie Lawson from Victory Lane, “Yeah, it was a little hairy, Ive never been in that situation, it’s my first win”, shared the race winner. “I gotta thank my wife, my daughter there, my brother, this was just a frame and a steering box on Thursday night. My brother came, put it together and it’s just perfect”.