Hampton VA, (6-30-18) Continuing the wave of momentum and fierce race action in its weekly racing series,Larry King Law’s Langley Speedway was at it again, this time hosting the Virginia Sprint Car Series who blister’s around the famed four tenth mile oval well below fifteen seconds. Light weight, big winged with moderate power, The Virginia Sprint Car Series will certainly test the parallels of both driver and car as one. Also, in competition were the ERA Realtor Winged Champ Karts, Cycle City Corp Bandoleros, Cycle City Corp Legends and the Pepsi Grand Stocks. Then capping off the evening, an always dazzling display of fireworks provided by Zambelli Fireworks in honor of our nations Independence. Here’s the recap of all the racing action. 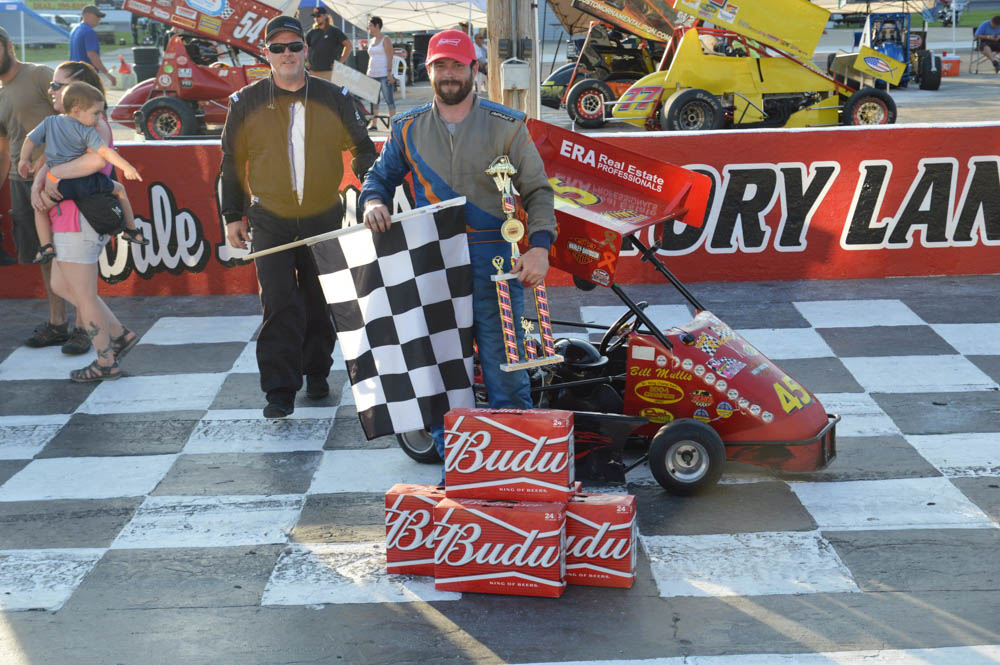 ERA Realtor Winged Champ Karts 20 Laps:Aaron Leach began the afternoon by picking up the Winged Champ Kart pole with his 23.111 second lap. Jeffrey Johnson would get the two spot on the grid with Tillman Heuer, Chris Bechtel and Harry Leach rounding out the fastest in Winged Champ Kart qualifying. Green flag waved to the nineteen car field and pole sitter Aaron Leach would lead lap one. Tillman Heuer along with Harry Leach were in the line of the leader as part of a three car tandem in the early laps of the race. Not long after did the three car tandem consisting of the leaders pulled away from the rest of the field as the halfway went up on the board. Latter laps in the race, Harry Leach in third would lose the draft setting up a two car sprint to the finish for the leaders. Final laps saw Tillman Heuer searching for a way around the leader but was denied any chance as Aaron Leach wins in Winged Champ Kart racing action. Aaron Leach in Victory Lane, “It was far from easy”, shared the race winner. “I don’t know what happened to my brother, he was the third kart in the train. I hope he had a good finish, I can’t thank ERA Realty enough, Budweiser for sponsoring the night. Seems like every time they sponsor I end up winning it, maybe they need to sponsor ever race”. 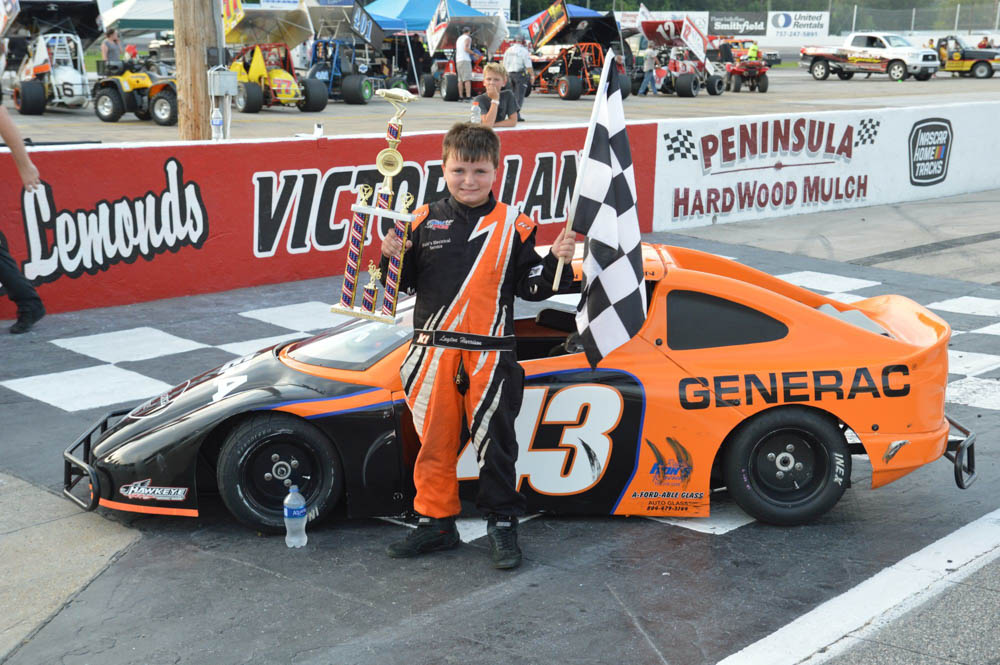 Cycle City Corp Bandoleros 15 Laps: Wyatt Philyaw took the Bandolero pole position in the afternoon time trials. Layton Harrison was nearly equal to the task for a share in row one. Jacob Derrick, Autumn Weaver and Logan Clark were the five best in Bandoleros qualifying. The flagman started the race by showing the green to the ten car field and securing the point would be the pole sitter Wyatt Philyaw. Early mover Jacob Derrick would nearly get to the bumper of the leader before he fell off from his single car spin. Still in the early stages of the feature, Layton Harrison started to run down the race leader and when the halfway concluded, the battle for the lead was on. Both Philyaw and Harrison battled hard but the excessive contact finally sent race leader Wyatt Philyaw into the front stretch wall ending his hopes for the race win. Back to the green, Layton Harrison would become the race leader with Autumn Weaver now in the chase. Final laps saw Weaver on the bumper of the race leader looking for way around but the leader made his car two lanes wide denying Weaver of the race win. Layton Harrison would go on to win in Bandoleros race action. Harrison from Victory Lane, “It feels good, Id like to thank my sponsors, mom, dad and Jason”. 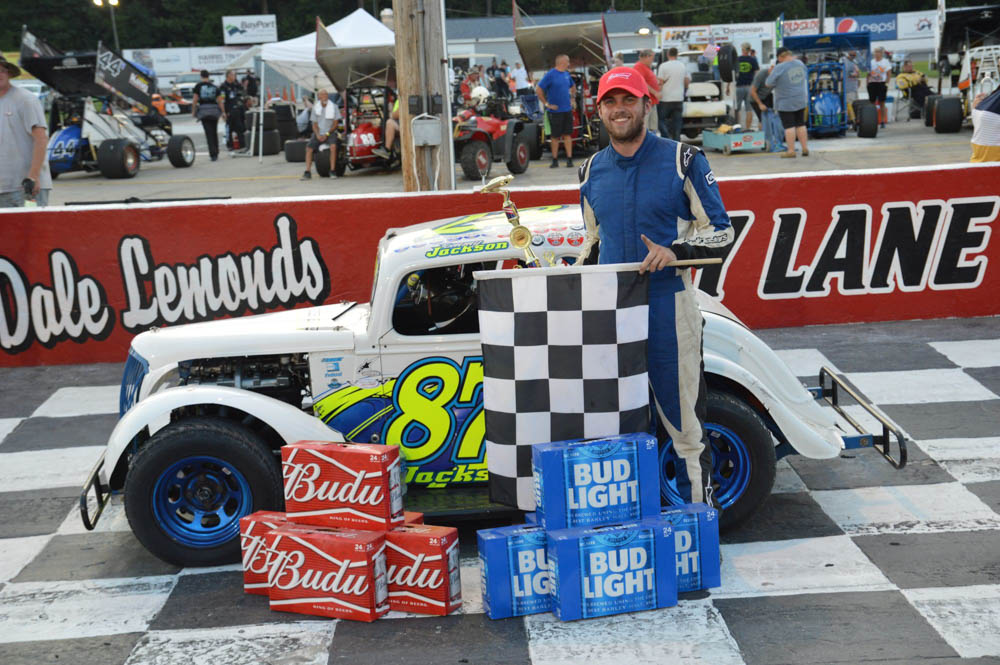 Cycle City Corp Legends 25 Laps: Division series points leader Tommy Jackson Jr was back again on pole with a lap at 17.841 seconds. Hot on the pole sitters trail was Spencer Saunders who qualified second followed by Daniel Silvestri, Ryan Center and Devon Courtney as the five best in Legends qualifying. Green flag was given to the field and Tommy Jackson Jr would lead lap one. Daniel Silvestri from the third starting spot would get by Spencer Saunders in second who then began his chase of the race leader. Still early in the feature, Jackson Jr would open up an eight car length lead when lap traffic soon came into play. Pass the halfway and clear of the traffic, Silvestri would close the gap to five lengths. Final laps in the feature would see Silvestri try and close in on the leader but Tommy Jackson Jr proved to be to much. Tommy Jackson wins and had this to say in Victory Lane. “It was good for the first eight but then it got really tight”, explained Jackson Jr. “Started to move around and found a few things that worked but I kept catching lap cars at the worst places. If you told me that we would have won three or four I wouldn’t have believed it. Its pretty tough competition out here so to stay ahead of these guys takes a lot of hard work”. 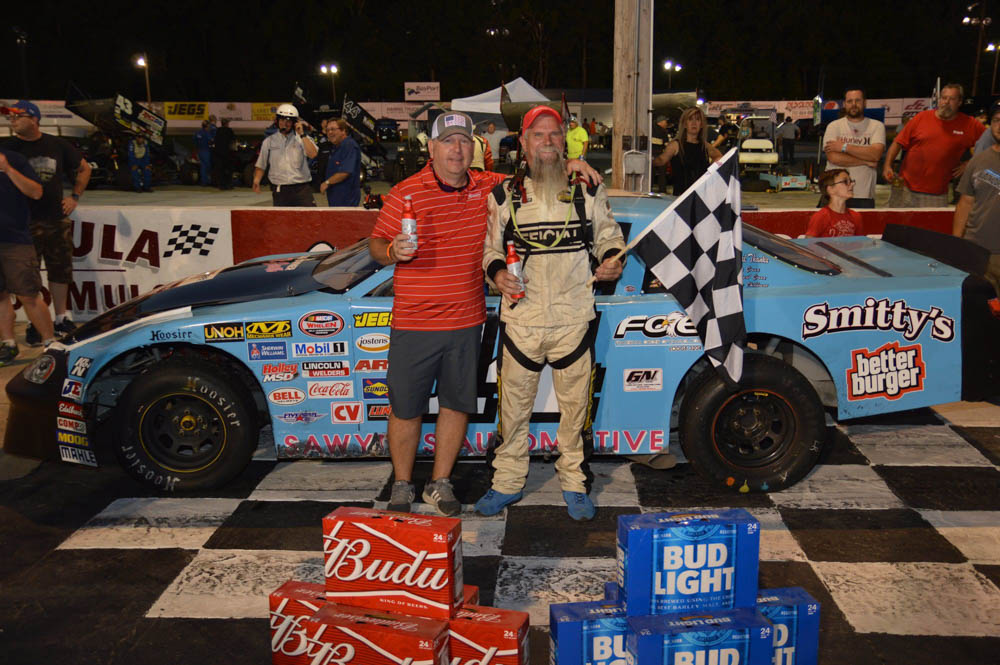 Pepsi Grand Stocks 40 Laps: Tim Wilson would take the Grand Stock pole position putting down an 18.015 second lap. Paul Lubno, whose had the hot wheel in recent weeks would start second in row one. Green flag waved and off into turn one did Wilson show the Grand Stock grid. As the race leader Wilson was up to the task early, so would Michael Waters but soon would give way to the charging Paul Lubno for second. Laps later, Lubno soon began to close in on the race leader Wilson when the races first caution occurred. On the ensuing restart, leader Tim Wilson gets the launch he needed to secure his race lead. Halfway in the feature saw Paul Lubno battling for the race lead. Both drivers would engage in the beating and banging for the lead to the excitement of the fans. But then trouble for Lubno just after he took the lead from Wilson, new race leader Lubno goes around off the bumper of Wilson to bring out the race caution. On the next restart, Michael Waters would inherit the race lead as Tim Wilson would go to the rear for rough driving. Back to the green, Waters easily established the point but on back, Paul Lubno was coming in chasing down race leader. After doing away with Wilson one more time, then battling Grant Blasingame for second. A determined Paul Lubno would then do away with the race leader Waters and from there would go on to win in Grand Stock race action. In a Grand Stock division thriller, Paul Lubno had this to say in Victory Lane. “I know Tim Wilson, he’s a clean driver”, said the race winner. “He might have broke loose sideways and got into me. Its all good, its just hard racing, as long as we can bring our car home in one piece we aint worried about a cut tire, will just put another one on and try it again”. 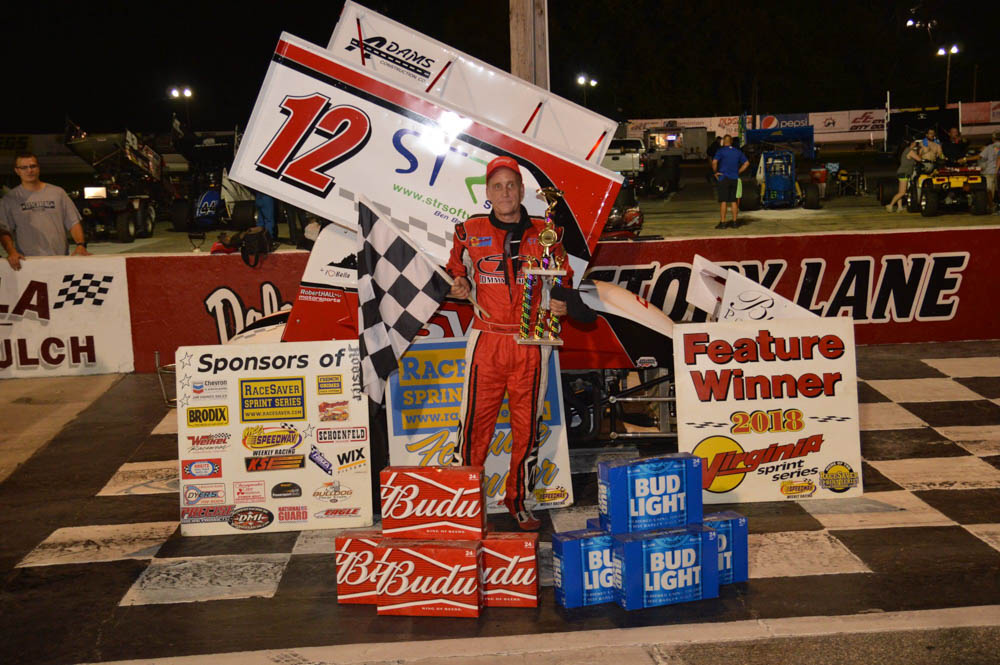 Virginia Sprint Car Series 30 laps: In the Virginia Sprint Car Series heat races, heat race one was won by Glenn Worrell. Bill Rice was the early leader but had to give way to the faster ride of Worrell in the final few laps. The second heat race saw Tony Harris go wire to wire and unchallenged to take the eight lap feature. By virtue of the two heat races, Bill Rice was on pole with Glen Worrell second on the front row. Joshua Perreault, Tony Harris, Chris Ware and Mike Leraas completed the top six on the grid. Green flag was in the air and the roar of twelve car field came to life. Leading lap one would be Glenn Worrell with Bill Rice, Tony Harris all in tow. Laps later, the race leader Worrell had easily built up an eight car length lead and in less than ten laps began lapping slower cars. Just before the halfway, from the fourth starting spot, Tony Harris was on the move. But at the halfway, the race had its first caution which bunched back up the field. Ensuing restart saw race leader Glenn Worrell take off leaving Harris and Leraas to settle the second spot on the grid. Harris needed a few laps to take second who then set his sights on the leader. Entering into the late stages of the race, lap for lap, Harris was running down the leader. But the laps would run out as Glenn Worrell would go on to win the Virginia Sprint Car feature. Worrell from Victory Lane, “That a, wow, God is good, God is great”, an exhausted Worrell said. “He knew how bad I needed this one, I knew Mike Leraas was right there. I was getting tired, my left rear tire was wearing out but that man up there made it done. My mom and dad are here tonight, my wife, this is awesome, couldn’t be any better, this by far is the biggest win of my career”.