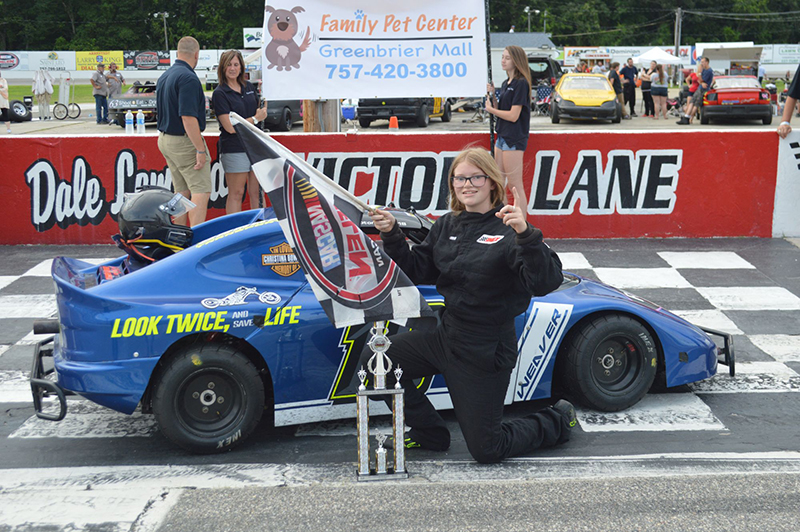 Cycle City Corp Bandeloros 15 Laps: Bradley Kilby picked up his second pole on the season in afternoon qualifying. The fast lap in the division was set at 21.702 seconds with Autumn Weaver just twenty three thousandths off the pole speed starting second on the grid. In the five car field the green flag was displayed with the pole sitter showing the way but on his side was Autumn Weaver lap for lap. Several laps in, Autumn Weaver finally nosed ahead for the lead but lost it just the same as Kilby would take it back. But then trouble for the pole sitter, Kilby would spin allowing Weaver to drive on for the race win. Autumn Weaver from Victory Lane, “Yeah this is my home track, I wouldn’t know what to do without it. I won my very first race here and I’m glad to get back to Victory lane here and thank everyone who has helped me”, shared race winner Autumn Weaver. 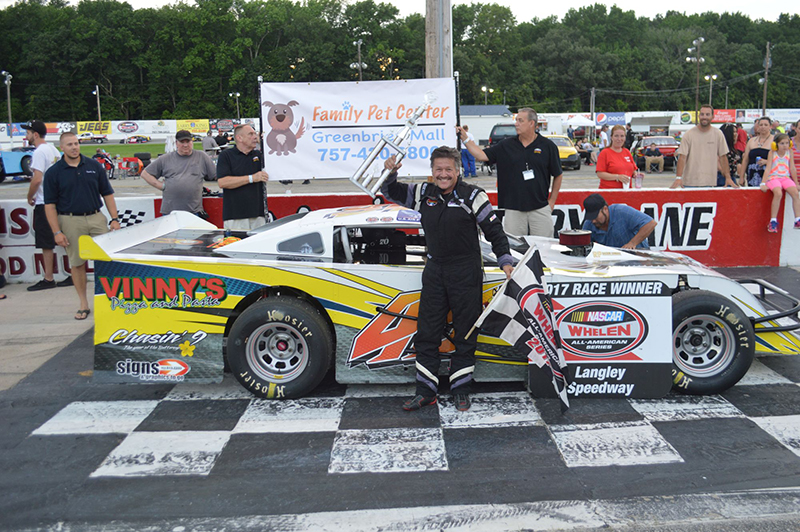 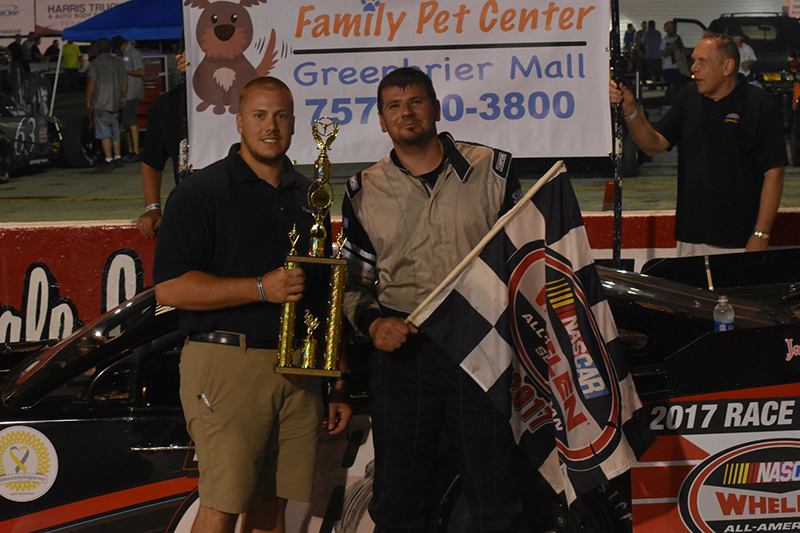 Larry King Law’s Modifieds Twin 33 laps: Matt Carter would get to lead the nine car field to the green thanks to his fast lap in qualifying set at 16.948 seconds. Starting to the pole sitters right and earning a share of the front row was Danny Harrell just four thousandths off of Carter’s time. Green flag waved and securing the early race lead was Matt Carter. Shawn Balluzzo was an early mover and was in pursuit of Carter’s race lead when on lap twenty of the feature, Balluzzo was the new race leader. In a race halted by one caution, Balluzzo once out front would not give up his race lead to the charging Matt Carter and would go on to win the first of the twin Modified events. Balluzzo had this to say, “It’s been a good year so far, all the competitors out here are really good, the #78 is really good. The car loves the heat and is doing good”, expressed Balluzzo from Victory Lane.
In the second Modified feature, Dennis Holston engine woes would give Eric McPherson the pole based on NASCAR’s rule of inverting the field giving race one winner Shawn Balluzzo the eight spot on the grid. Racing began with the charge of Jamie Sample and the early race lead. Matt Carter was also hard at it and would catch the race leader as the halfway neared. Soon after, the pass would be made with new leader Matt Carter but coming from the eight spot was Shawn Balluzzo but would run out of laps as the race winner Carter would loop his car crossing the stripe first for the race win. Matt Carter from Victory Lane, “Yeah, that was a pretty wild ride there towards the end”, said Matt Carter. “The car got tight in the long run, I started over driving it, I got a little excited. I’m just glad to bring this thing home to Victory Lane I mean, I cannot thank my crew enough”. 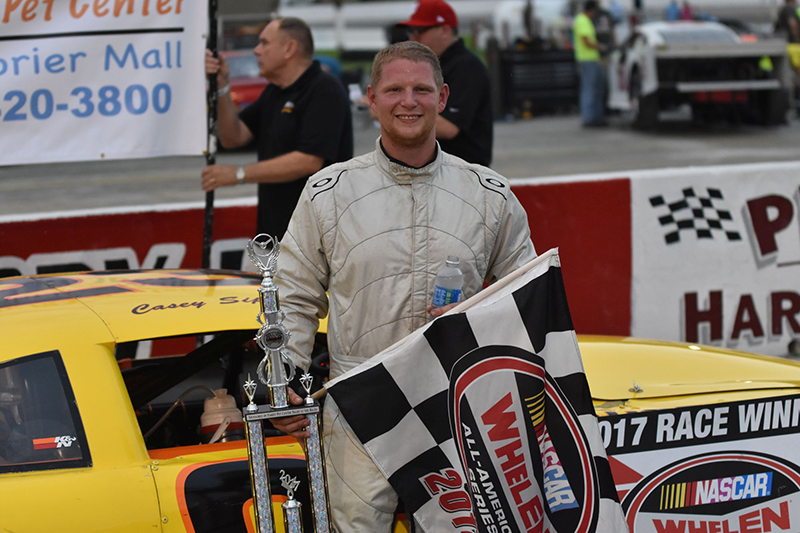 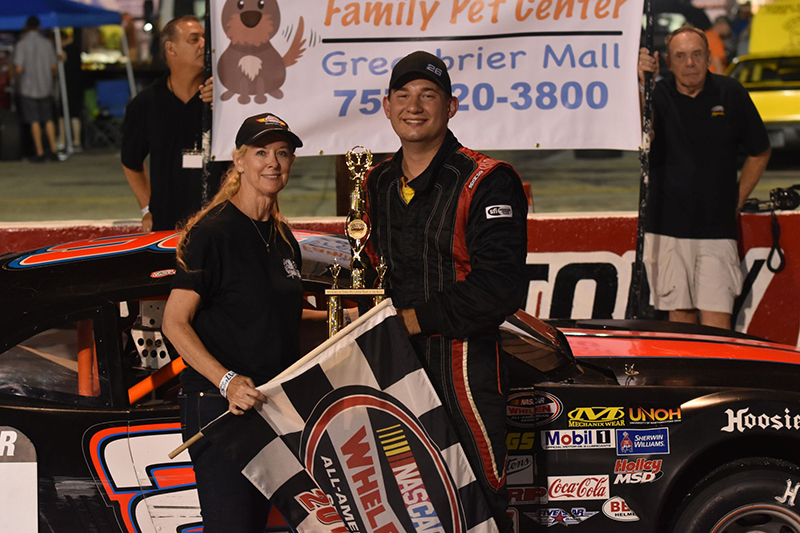 Riverside Paper Pro-Six’s Twin 20 Laps: Bobby Hall was quickest of the six competitors to qualify in Pro Six race action. His best at 17.543 seconds edged out Casey Sipe’s lap just a mere eleven thousandths and deserving a share of the front row. Green flag waved to the grid and Bobby Hall had the early lead. But having none of it was Casey Sipe who challenged that lead in the early portions of the race. Sipe was able to take the lead before the races first caution but on the restart, gave way to Hall to reclaim the lead. On back, Adam Florian was working his way to the front as Sipe was all over Hall in a battle for the lead as the halfway approached. But with just three laps to go, Casey Sipe was able to get by the leader and go on to win the first of twin race events. Casey Sipe from Victory Lane, “Ya know we spent a little time at the house trying to get it to roll through the corners and it finally was”, said the race winner. “I appreciate Bobby racing me clean, that was a lot of fun, I had a good time. Look like they tore some stuff up at the end, I’m sad to see that. You know the year off I think hurt the division a lot cause we don’t run anywhere else but thank everyone for coming out tonight”.
In the second Pro Six race feature, per NASCAR rules the field was inverted giving Bobby Hall the race pole and forcing the earlier race winner Casey Sipe the fifth spot on the grid. Green flag waved as Hall would show the five car grid into turn one. Big mover in the early goings was Casey Sipe who found his way to second in chase of the leader. Several laps into the race, Bobby Hall would click off laps bettering the effort made by Casey Sipe and would go on to win the second race feature in the Pro Six division. Bobby Hall from Victory Lane, “Yeah, it’s a testament to these guys right here. I play the easiest part in this situation, I just turn the wheel”, says the race winner. “I’m glad to be back, I’m thankful we got the car straight, it’s such a blessing to get a second win. I’m just grateful to Bill Mullis and giving us a place to race”. 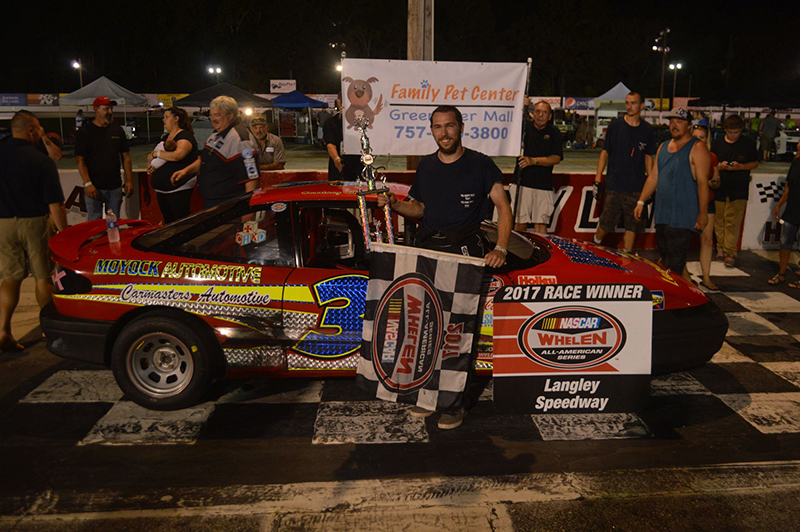 Carroll’s Automotive UCAR’s Twin 20 Laps: Michael Waters continued to be the man to beat in UCAR race action claiming his second pole on the season. Showcasing a lap at 19.203 seconds with potential rival Eric Schaffer starting second in the grid. Green flag waved and into turn one was Waters showing the lead. But from the outside, Schaffer would make his move and lead lap one. After a lengthy rain delay, racing resumed with Schaffer as the race leader but laps later, Michael Waters would regain the lead at the halfway mark of the event. Eric Schaffer would give chase but it was Michael Waters crossing the stripe first in UCAR race action. Waters from Victory Lane, “I was glad we didn’t get cancelled out, I was really eager to get back in the car”, claimed Waters. “Glad we could make it four in a row, thank my girlfriend Courtney, she’s letting me drive it. Eric Schaffer going side by side and to the #28, kudos to Thomas, holding on the outside for three laps, that was awesome”.
In the second UCAR race feature, green flag action was on the track as Michael Waters showed the field into turn one. But it was Eric Schaffer who would lead lap one but the lead was short lived. As lap two was scored and on the board, Waters regained the race lead. The race was halted by one caution just before the halfway at which the restart saw Schaffer retake the lead. But on this night, Michael Waters proved to be to much as he would go on to sweep both race features. Waters spoke in Victory Lane, “Yeah, me and Eric had a real good battle, I had a blast racing with him side by side. We didn’t touch, we didn’t rub, just close racing and it was fun”. 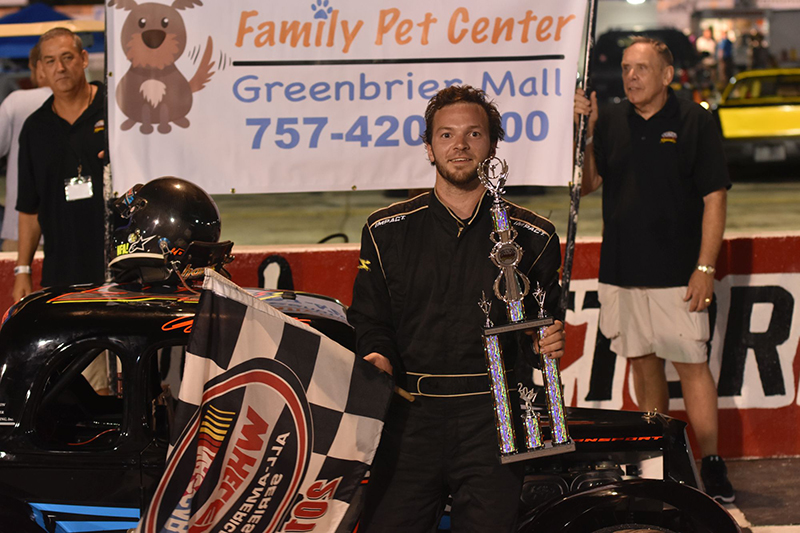 Casey Cycle City Legends 25 Laps: Spencer Saunders was on pole in the Legends division clipping off a lap set at 18.244 seconds. Sharing the front row with Saunders was Tommy Jackson Jr just fourteen thousandths off the pole speed. Green flag was in the air and Tommy Jackson Jr would lead lap one of the feature. But soon after, Saunders would battle back and retake the lead. The intense racing at the front was not done when the leader slipped giving the race lead back to Jackson. Cody Carlton was equal to the task and was there to challenge for the lead as well. Several laps later and after the races lone caution, Carlton would take the lead in route to the race win. Carlton in Victory Lane, “These guys work their tails off to give me this car I mean it’s a rocket ship”, explains the race winner. “I just can’t thank them enough, I gotta thank Spencer and Jackson for running a good race. I knew something was breaking up in Jacksons motor and so I just took advantage of it. Man, that’s the hardest I’ve driven this car since I had it”. 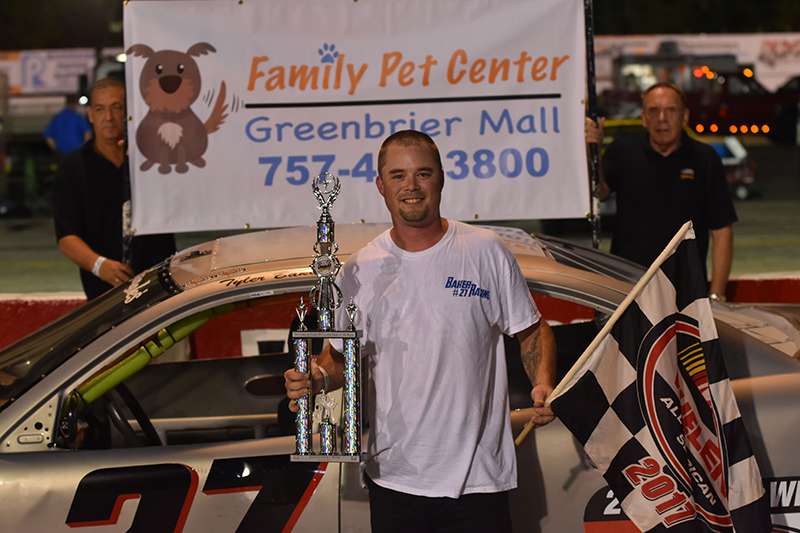 Bojangles Enduro’s 30 Laps: Tyler Baker pulled the one pill giving him the race pole in Enduro race action. Ray Haynes would start shotgun to the pole sitter in row one with Austin Davis, Robert Hiby and Don Massingo as the top five. Green flag racing began with Baker securing the race lead by turn two as the beatin and banging began behind him. From the melee of contact emerged Richard Quinn to run down the race leader but the run never came. Richard Ellis would catch and pass Quinn for second but meanwhile, Tyler Baker would get away and go on to win in the endure race feature at Larry King Law’s Langley Speedway. Baker speaks from Victory Lane, “I’m just so thankful that the rain held out and we were able to get our race in and it was a good night of racing”, expressed Baker. “I was hoping for a green flag run like that and it worked out good, the car drove fine, glad to be back in Victory Lane”.