Last week’s race action saw shake up’s in many of the series divisional points standings and no reason not expect much of the same this week as well. Though still way early in the race season to make a whole lot of, for some it’s about getting in position to create some opportunities. Another opportunity would present itself this week as nine races were on the schedule featuring the Casey Cycle Corp Bandeloros. Also seeing action was the Larry King Law’s Modified’s, Pepsi Grand Stock’s, Harris Truck Shop Super Truck’s, Carroll’s Automotive UCAR’s. The Cycle City Corp Legends along with the Bojangle’s Enduro’s would see race action as well. It’s Mosquito Joe & St. Leo University Night at the Race at Larry King Law’s Langley Speedway and here’s a recap of the exciting race action. 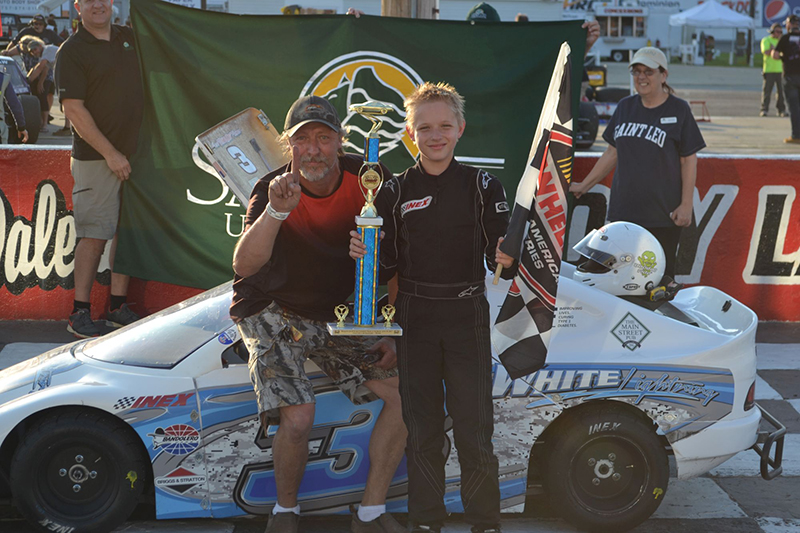 Cycle City Corp Bandeloros 15 Laps: Jacob Putman for the second time this year was on pole for the Bando race event. His lap at 21.456 seconds bested the eight car field with Bradley Kilby sharing the front row. Under a hot June sun, the green flag would wave and emerging out of turn two as the leader was the pole setter. But soon after and hot on the leaders heels was Autumn Weaver from the three spot on the grid. Weaver would give chase but it was Jacob Putman proving to have the quicker hot rod and went on to win for the second time in the Bandeloros series. Putman from Victory Lane, “Yeah, man dad did a lot of work on it, means a lot to win this race”. 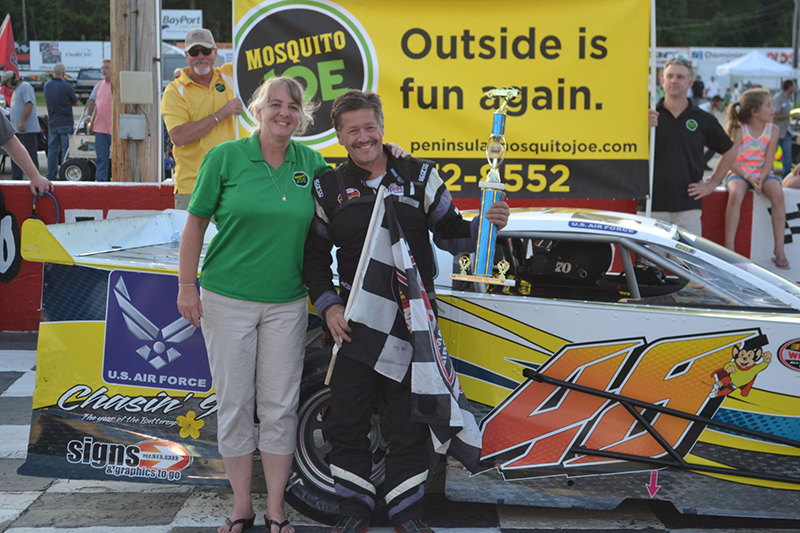 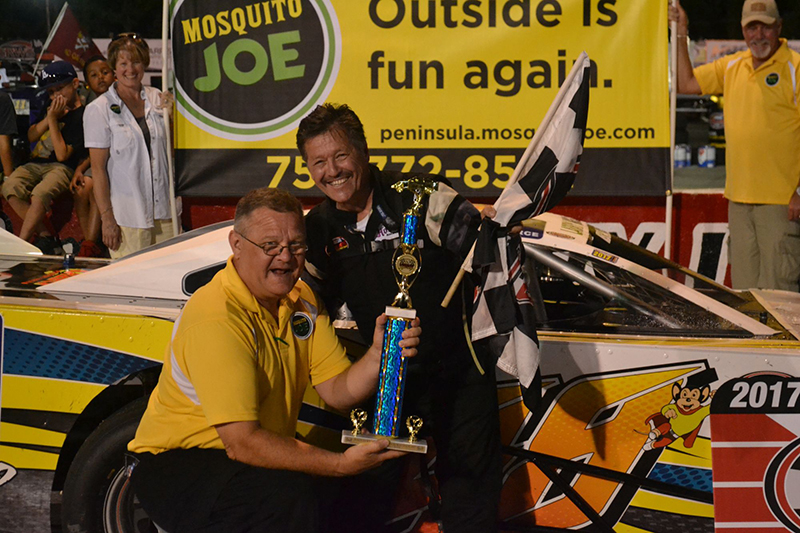 Larry King Law Modifieds 30 Laps: Matt Slye put it on the pole in the Modified division clicking off his lap at 16.856 seconds. Shawn Balluzzo earned the two position just missing the top spot by just twelve thousandths of a second. In the first of twin race events for the Modified division, the green was shown to the field as Slye easily secured the point by turn two. Several laps in, the pole setter was enjoying a three car length lead when Shawn Balluzzo began nipping away at the lead. Halfway point in the race saw Matt Slye showing the way but Balluzzo was at the bumper wanting to lead. Soon after, Balluzzo was able to get around Slye for the race lead surviving two restarts in route to the checker flag. Race winner Shawn Balluzzo from Victory Lane, “Were trying, we had to do it with a set of tires that has a whole in the right front, we patched it last week and it kinda hurt us in qualifying. But it’s great, these guys are great to race with, we tried to save something for the second race…maybe”.
In the second Modified race feature, the top eight from the first race was inverted per NASCAR rules giving Donnie Holston the pole. Earlier race winner Shawn Balluzzo elected to take advantage of NASCAR’s rules for max points by starting in the rear of the field. Green flag waved and Holston the pole sitter would show the fourteen car field into turn one. But that was as far as he would before a huge crash taking out several of the leaders including Holston himself. Back to the green, Matt Carter would emerge as the new race leader but would have to surrender that lead to Shawn Balluzzo. Benefitting from the cautions and having a strong car, Balluzzo took command from there. Matt Carter would give chase but from the rear of the field, Balluzzo wins them both at Larry King Laws Langley Speedway. From Victory Lane is Shawn Balluzzo, “It was great, I love racing with Matt, he had problems a few weeks ago with learning, a lot of these guys are learning”, expressed Balluzzo. “They’re doing a great job and it’s a lot of fun to be out there with them. The crew, the maintenance they do to this car and all the work they do is just amazing”. 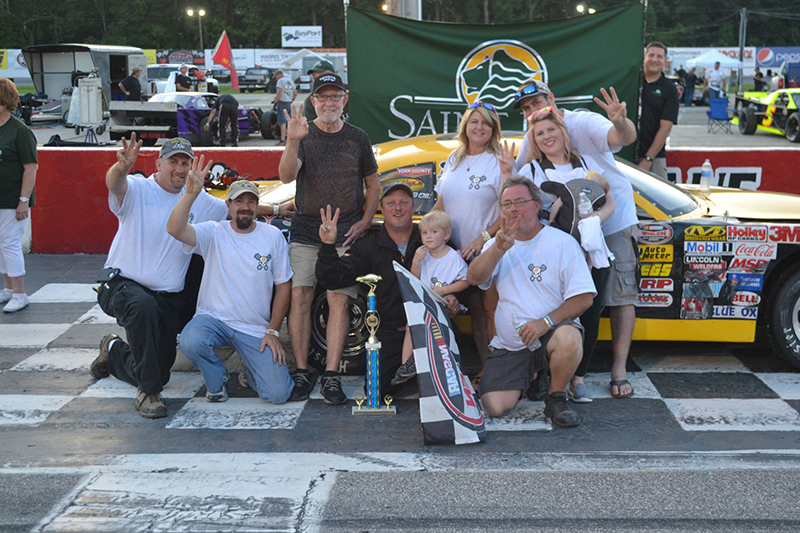 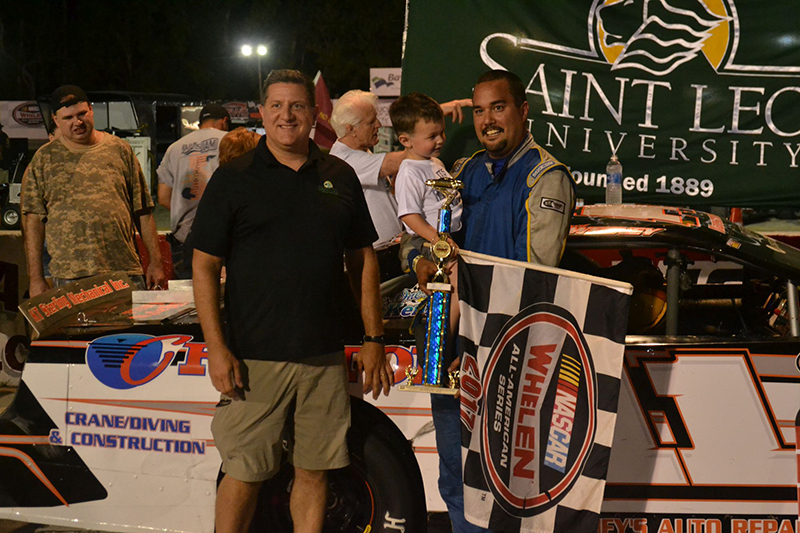 Pepsi Grand Stocks 25 Laps: Mark Frye was once again on pole in the Grand Stock race division sporting a lap set at 18.189 seconds. Rodney Boyd was equal to the task but slightly off the pole speed but earning his share of the front row. Green flag would wave in the first of twin races to the seven car grid as Mark Frye showed the field into turn one. Frye would create a four car lead in the early goings but by halfway, Rodney Boyd was there. Just a few laps later, the leader was under assault from Boyd who eventually cleared Mark Frye. But in the caution free event, once in the clean air, it was Rodney Boyd in Victory Lane. “Man, I’m used to this kind of race track buddy this is old school right here”, explained Boyd. “We had a blast, I had a blast, these guys are having a blast working on this race car and we got it right now but I know those other guys are hunting for us. I can’t speak enough for the guys that work on this car but coming from the back will be a challenge. I’m going to have to work it and going to do the best I can”.
In the Grand Stock night cap, the field inverted per NASCAR’s rules, the top eight spots from the last race feature giving Paul Lubno the race pole. Green flag waved and Paul Lubno’s lead was short lived as Tommy Sweeney made quick work for the race lead. Several laps later, Sweeney had built up a large lead but getting attention was the race one winner Rodney Boyd who had to start eight in the grid. Boyd would pace himself nipping away at Sweeney’s lead before getting to the bumper on the last lap. Contact to the rear bumper of Sweeney had Boyd nearly wrecking and saw Tommy Sweeney winning the second Grand stock race feature. Tommy Sweeney from Victory Lane, “It’s been rough man, first off I gotta thank Rodney for when he got to me he could have turned me. He got into me but he ran me clean, we’ve been thrashing on this car all day”, said the race winner. “We been fighting it, I didn’t want to finish fifth in the first race but I guess it paid off”. 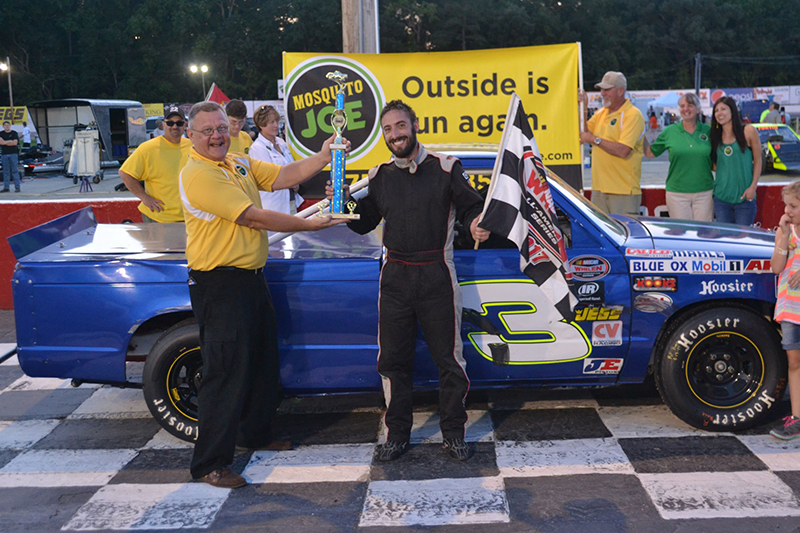 Harris Truck Shop Super Trucks 25 Laps: Chase McAdams was the fastest in afternoon qualifying posting his pole lap at 19.202 seconds. Brad Adams just missed another pole position with his hot rod just thirty seven thousandths off the speed of McAdams. Green flag was in the air and the pole sitter Chase McAdams showed the field into one. Early stages of the feature saw McAdams showing the way but a few laps later, Brad Adams would knock on the leader’s door and would take the lead as the halfway neared. With some of the faster trucks suddenly falling off the pace, race leader Adams amounted a solid lead in route to his second win of the year. Brad Adams in Victory Lane, “Yeah, I don’t know what happened to Chase, I mean he was right there the whole time and he slipped off three and four. Stayed there for a lap or two then I don’t know what happen to him, maybe he broke”. 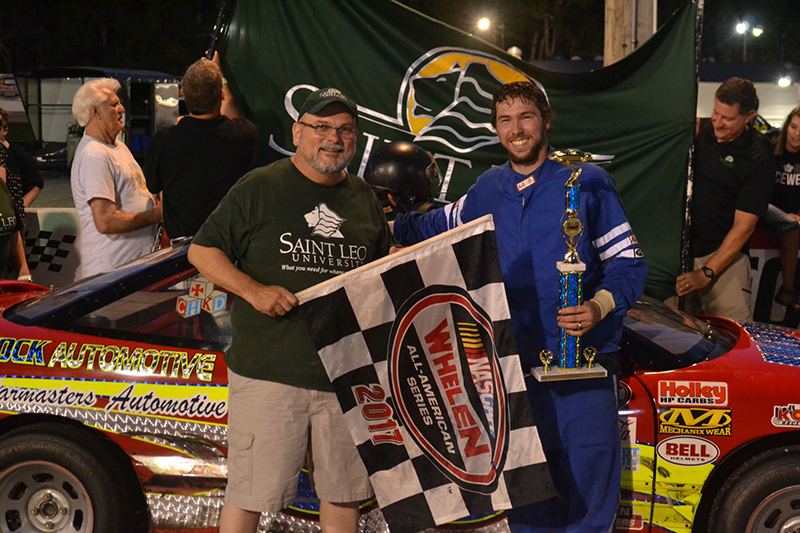 Carroll’s Automotive UCAR 25 Laps: Jesse Jones IV returned to UCAR race action at Larry King Laws Langley Speedway and also put his rocket on pole. His lap at 19.338 seconds was just a bit better than the efforts of Eric Schaffer’s but worthy of a share of the front row. Racing got underway with pole sitter Jesse Jones, Eric Schaffer and Michael Waters beating and banging for the race lead before Jones was able to secure the race lead. But it wasn’t over with as Waters soon cleared Schaffer for second, then turned his sights and zeroed in on the race leader. Just a few laps later and some contact with the leader, Water’s took the race lead and began his charge to the checkers. The race had one caution period that set up a thrilling restart as Water’s was able to hold off Eric Schaffer’s attempt at the lead to go on and win a thrilling UCAR event. Michael Water’s from Victory Lane, “Yeah, he tried to pinch me down in the corner, I don’t know how bad the other side of the car is. I knew something was going to go down at the beginning of the race”, shared the race winner. “I heard the rumors on pit road so…I think Langley’s car count just might go up”. 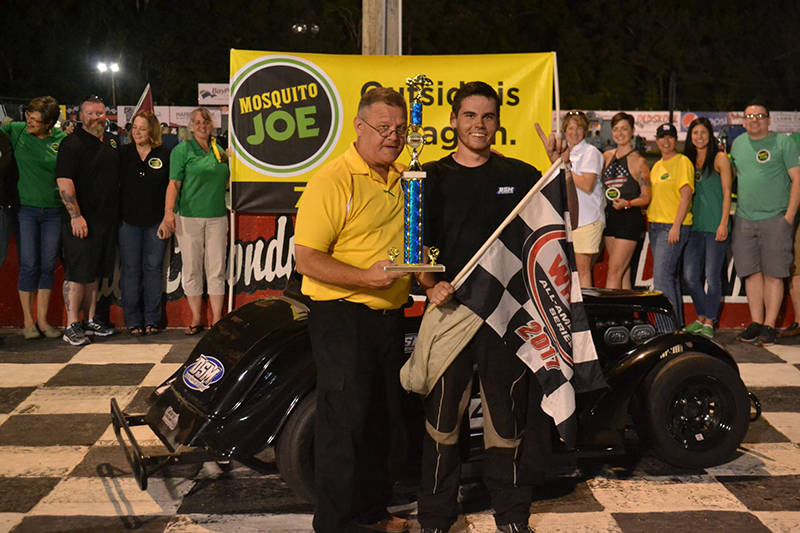 Cycle City Corp Legends 25 Laps: Cody Carlton was on pole for the third time this season in Legend’s race action. With a lap at 18.127 seconds, bested the eighteen car field with series points leader Brian May riding shotgun on the grid in row one. Racing would soon begin and pole sitter Cody Carlton wasted no time in establishing his race lead. After a brief caution period, melee on the restart for leader Cody Carlton as his night is ended going into turn one wall. On the next restart, Dillion Spain would become the new race leader and appeared to be the faster car in the field when Spencer Saunders ran down the leader to take over the race lead. Several laps would see both Saunders and Spain would go side by side exchanging the lead before Spain on the final lap gave Saunders a shove that sent him spinning. As a result, Dillion Spain got to the stripe first and won for the first time in the 2017 season at Larry King Law’s Langley Speedway. 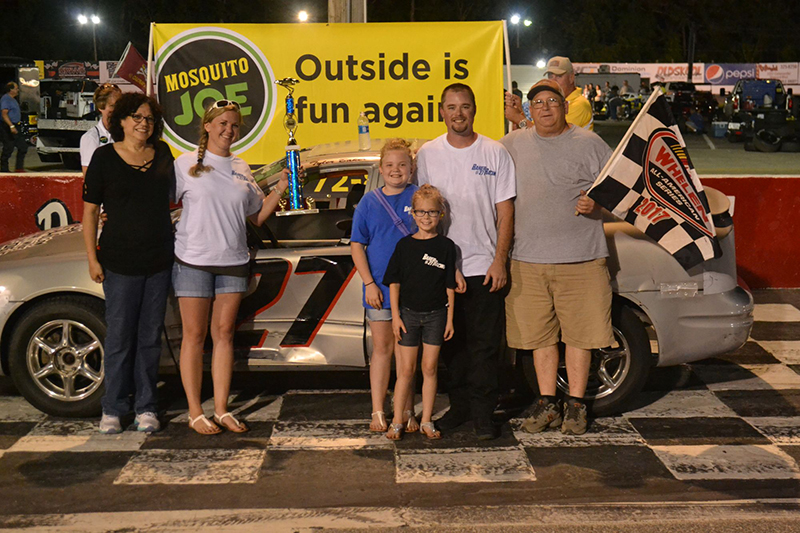 Bojangles Enduros 30 Laps: Austin Davis pulled the one pill giving him the race pole in the endure race division. Jason Terrill would get to start beside Davis in the front row when the green flag waved to begin the race. Just a few laps in saw the first lead change as the hot ride of Tyler Baker took the race lead. Following in his tracks was also another hot ride in the series of Richard Ellis before his night ended abruptly and ending up on pit road. Later stages of the race, Rodney Davis would get within 2 car lengths of the leader but couldn’t mount a charge for the race lead. Tyler Baker would prevail as the race winner for his second win of the season. Tyler baker from Victory Lane, “That was a really great race, I never thought it was going to end. Hope everyone is alright, there was a lot of tore up stuff out there on the track. Just want to thank everybody, thank Larry King Laws Langley Speedway and all the fans for coming out here to support us”.