Hampton, VA (March 31, 2018) – Larry King Law’s Langley Speedway opened its gates for its 67th race season hosting seven of its eleven race divisions. Featured in the opening day excitement were the Cycle City Corp Bandeloros, Cycle City Corp Legends, Bojangles Enduros along with the Harris Truck Shops Super Trucks. Also, on the highly anticipated race card were the Pepsi Grand Stocks and feature division Taylor Waste Services Late Models. Heading into the race season, all four corners were repaved just a couple of weeks ago which will promote faster speeds and jeopardize track records in each race division. Here’s a recap of all the exciting race action. 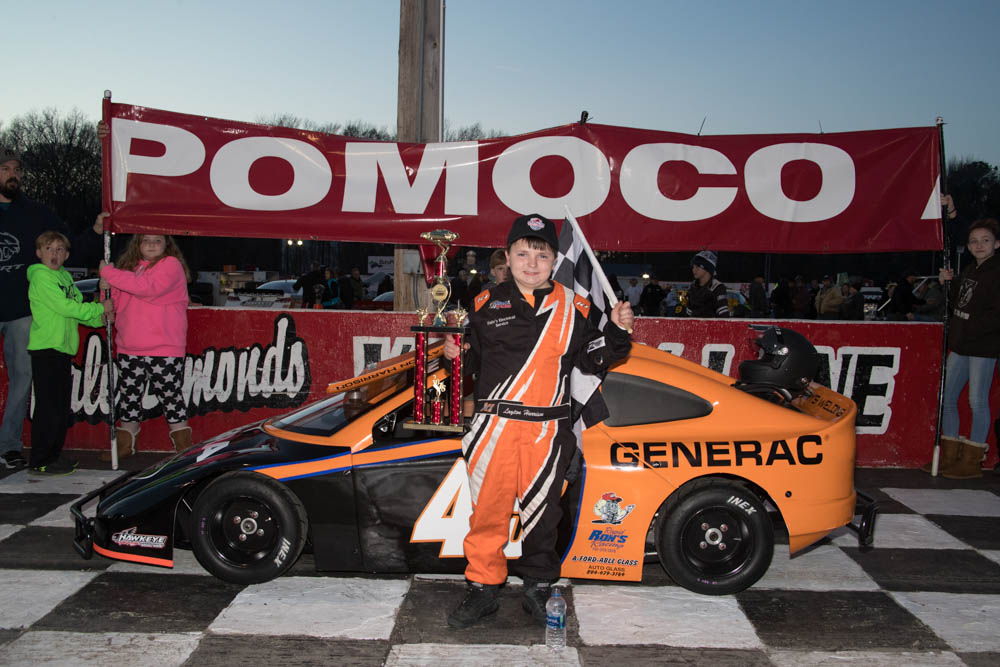 Casey Cycle City Corp Bandoleros 15 Laps: Layton Harrison began his season on pole in Bandolero qualifying with a lap set at 20.945 seconds. Brandon Andrecs had a hot wheel of his own just twenty seven thousandths off the pole in a share of the front row. Green flag racing began and the pole sitter Layton Harrison quickly established his race lead. Early mover in the field was Autumn Weaver who went from fourth to second in just two laps of the event. But Layton Harrison was having none of it and soon checked out going flag to flag for the race win. Harrison in Victory Lane, “Like to thank all my sponsors, Jimmy’s Wielding, Landon, Jason and my mom and dad”. 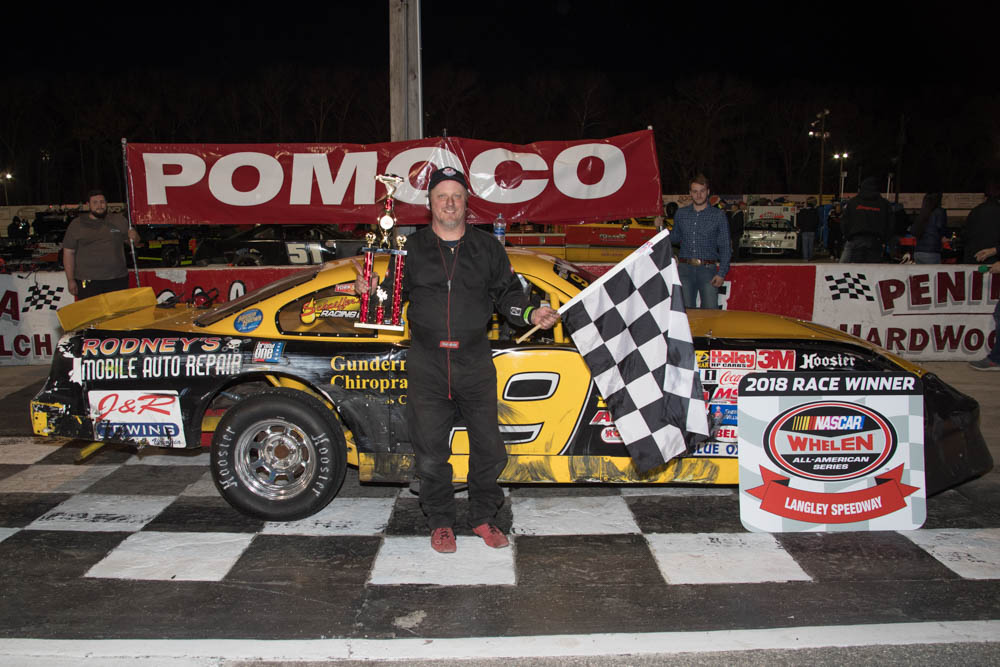 Pepsi Grands Stocks 40 Laps: Tim Wilson began his championship march by nabbing up the Grand Stock pole clocking in at 17.528 seconds. Sammy Gaita would earn a share of the front row just fifty six thousandths back of the pole sitter Tim Wilson. Rodney Boyd, Paul Lubno and Michael Waters were fastest in Grand Stock qualifying. Green flag would be displayed to the field and it was pole sitter Tim Wilson showing the field into turn one. Wilson would get the early lead but it would soon collapse as Rodney Boyd from the three spot was on the move. Paul Lubno was also on the move but soon after, the race saw its first caution flag. Back to the green, Wilson’s lead was short lived as Rodney Boyd took a turn followed by Paul Lubno just a lap later before the halfway. After one last caution, Rodney Boyd gave the leader Lubno a shove to retake the lead. But the action was hardly over, Tim Wilson would battle back to retake the lead with just four laps to go. Suddenly, Boyd would get to the door of Wilson and with just two laps remaining, would then run Wilson up the hill for the race lead along with the thrilling race win. Boyd recounts the action in Victory Lane, “That was a rough battle tonight, they started dishing it out early and it became a shove match the entire time. I’m not going to make light of it, I gave what I was given and were out here in Victory Lane. But I love racing against these guys, I love racing.” 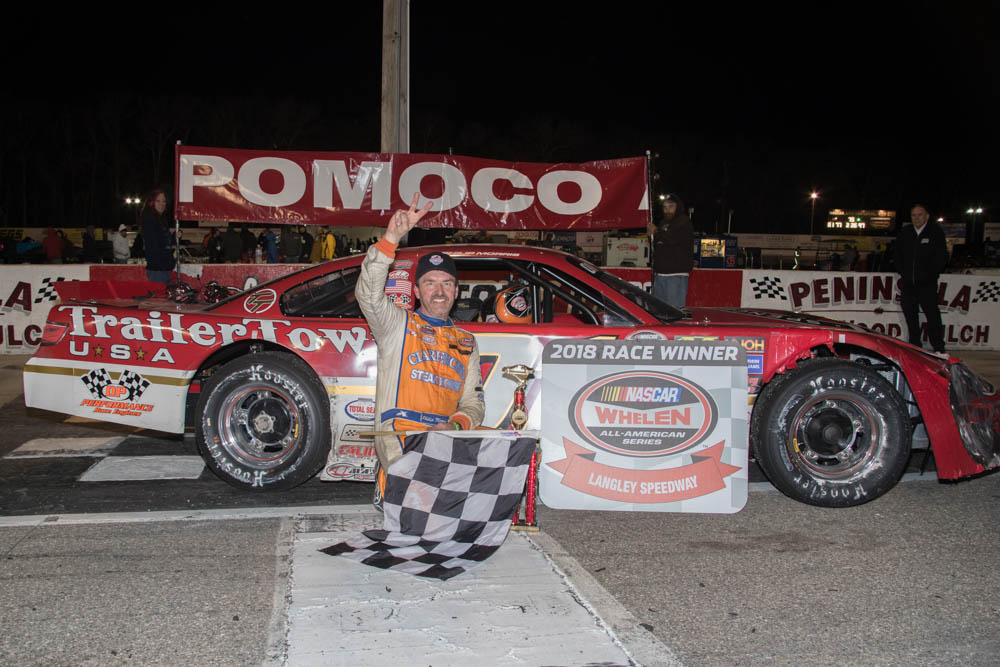 Taylor Waste Services Late Models Twin 75’s: Four time National Champion Philip Morris sat his hot rod on pole and in doing so, broke the track record in the process. His lap at 15.095 seconds top the efforts of Justin T Carroll by only fourteen thousandths earning
spot on the front row. CE Falk, Nick Smith and Ruben Garcia completed the five best in Late Model qualifying. In the first of twin 75 lap events, green flag would wave and pole sitter Philip Morris would lead the twenty five car field into turn one. Morris’s lead would be brief when he would slip in turn four giving way to the hard charging CE Falk in the early goings. After a brief caution, Falk remained the leader with Nick Smith in tow as Morris settled in third. Several laps now into the green flag run, Falk continued to show the way as the halfway neared. The second caution waved over the track, bunching back up the field and another exciting restart to the race. Back to the green and Falk once again maintains the race lead, Morris this time is just one car length back. Later in the run, lap traffic came into play when Morris used a lap car to retake the race lead leaving CE Falk frustrated and settling for second. Final laps saw Falk get close and challenging but it was Morris who was strong and would go on to win the race feature. Morris from Victory Lane, “On the outside our car was a little slow in starting. I think we had a pretty good race car if there’s anything left there on the right side. Battling with the lap cars was a lot more challenging than I thought it would be. I was really worried that I might had costed my guys the race, just a lot of contact there.”
In the nightcap, a mandatory eight car invert was applied to the starting grid giving Brenden Queen the race pole, Philip Morris would start eighth. Green flag in the air and pole sitter Brenden Queen easily secured the point. But soon after, big crash involving CE Falk and Justin T Carroll ended their chances for the race win. Several cautions later, Queen continued to lead as Philip Morris would haunt the race leader as was Connor Hall in third. Approaching the halfway point, Brenden Queen was clearly in cruise control with Connor Hall in chase. Soon business picked up as the leaders Queen and Hall would trade jabs before Connor Hall finally secured the lead. But then in a series of cautions and several lead changes later, Connor Hall emerged as the race leader. Then with just five laps remaining, Philip Morris would earlier have a flat tire would pass the race leader hall and go on to win the second race feature. Morris had this to say, “Yeah, the thing looks like a demolition car but I wouldn’t take a hundred thousand for her. I appreciate everyone running me clean, we had some pretty big problems there and got into some cars.” 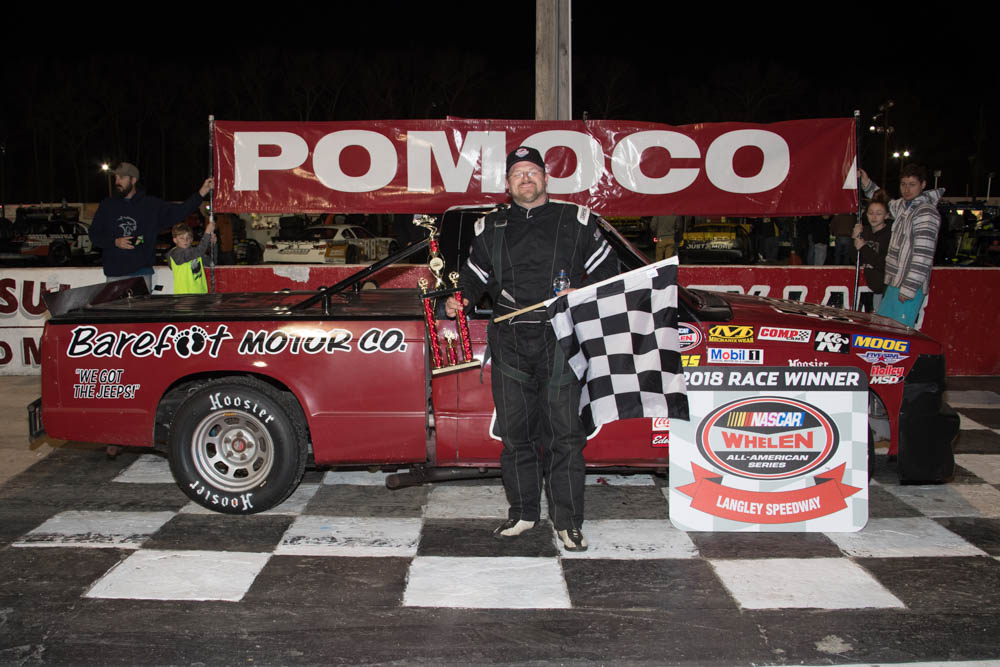 Harris Truck Shop Super Trucks 25 Laps: Jacob Carr had the fast lap in Super Truck qualifying taking the pole with a lap at 18.736 seconds. Dustin Mullins narrowly missed a shot at the pole but the lap was certainly deserving on the front row starting second. Keith Wheeler, Elysia Potter and Ryan Huff were fastest in Super Truck qualifying. Green flag waved and it wasn’t long before Dustin Mullins would take the lead from pole sitter Jacob Carr. From there, Carr soon fell off the pace giving rookie driver Keith Wheeler the second position in chase of the race leader. Halfway saw much of the same as Dustin Mullins continued his charge when soon after the race had its first caution. On the restart, Mullins was able to get away from Wheeler and would easily go on to claim the checkers. Mullins spoke in Victory Lane, “Yeah, I’ll tell you what, I think we can put some stuff together we might be able to run with some of these guys. There’s a good bunch running, we got some new people running in the truck class, I think its going to be a great class throughout the year for sure and were looking forward to it.” 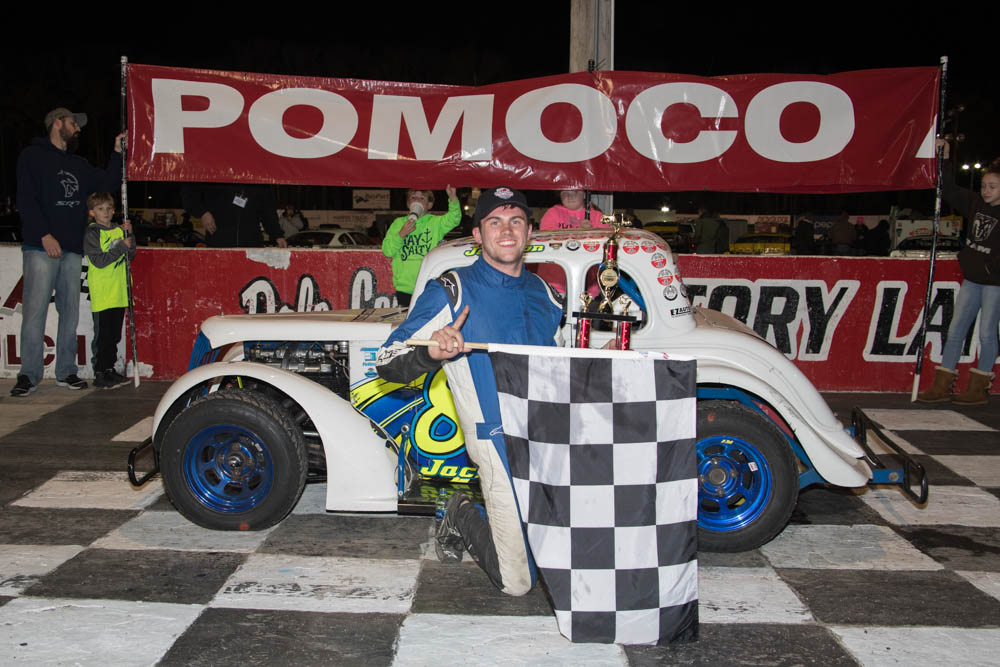 Casey Cycle City Corp Legends 25 Laps: Daniel Silvestri shocked the Legend Division by taking the pole with a 17.637 second lap for the top spot. The lap was just a mere two thousandths quicker than the lap of Spencer Saunders which made up the front row. Jamie Price, Tommy Jackson Jr and Kyle Beattie were the five best in qualifying. Green flag waved and into turn one did the pole sitter Daniel Sylvestri show the field. Out of turn two, Sylvestri clearly secured the lead with a hungry Spencer Saunders lurking behind. Laps later, the leader was soon harassed by Saunders as Tommy Jackson Jr joined in on the action all nose to tail. Halfway in the race experienced its first caution setting up a classic restart to the feature. Spencer Saunders was able to motor by the race leader Sylvestri on the restart but soon after it would be Tommy Jackson Jr getting by Saunders for the lead. Final lap, the leaders encountered a slower car out of turn four in which Saunders and Jackson went to the stripe to decide the win. In a thriller, it was Tommy Jackson Jr with the photo finish win. Jackson from Victory Lane, “Yeah, I knew we were good, our car was fast in all of the practices. I misjudged the track and mess up qualifying, I was really glad to catch that caution, it helped cool my tires that help a ton. Great job to those guys, they put on a heck of a race in front of me. I was enjoying it just watching it, I was enjoying it even more when I was leading it.” 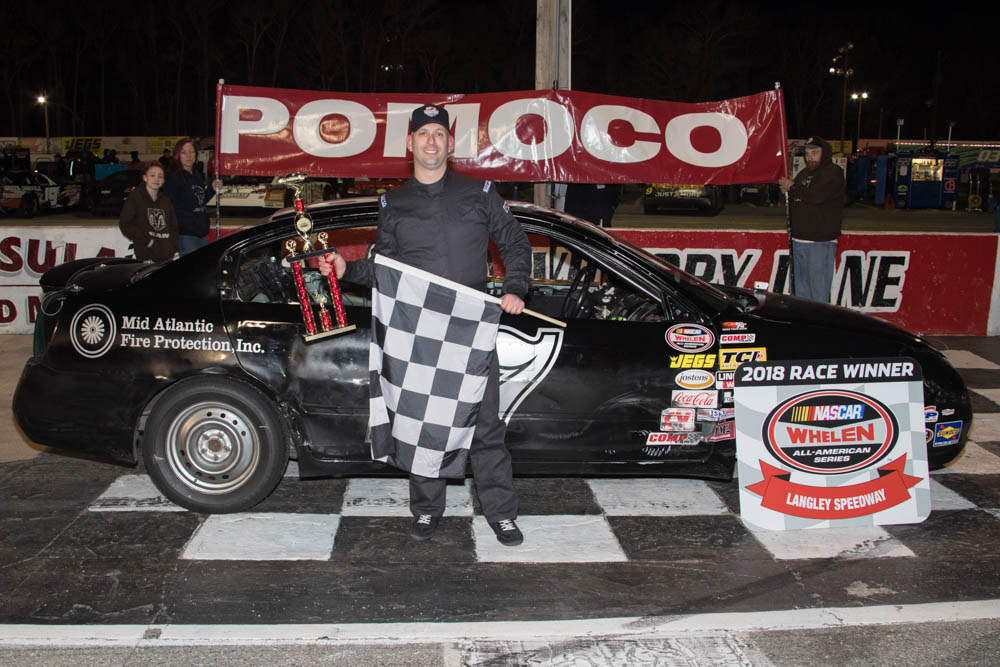 Bojangles Enduros 30 Laps: Aubry Pavlik pulled the one pill which decided the pole in Enduro race action. Ronald Klein, Ray Haynes, Alex Floroff made up the top two rows. Green flag racing began and it was Ronald Klein from the shotgun position on the grid who lead lap one. Klein would then lead several laps before giving way to Alex Floroff who would enjoy his race lead. But then lap traffic would come into play with the leaders coming together but it wasn’t enough, Alex Floroff held off Ronald Klein for the win. Floroff had this to say in Victory Lane, “That was definitely a wild ride, just fighting through traffic, barely getting by Ronald Klein. He was on my tail the whole time, congratulations on him coming in second.”