Since the gates closed at the end of Langley Speedway’s race season in 2015, there was no greater anticipation for local short track race action in the Mid Atlantic than the 66th race season at Langley Speedway. The evening’s race sponsor, “Pomoco Night at the Races”, featured five race divisions from the Cycle City Corp Bandos, Old Skool Video Games Super Streets, Cycle City Corp Legends, Taylor Waste Services Late Models and B&C Seafood Super Trucks. A capacity crowd was on hand to witness the drop of the green and here is a recap of the nights race events. 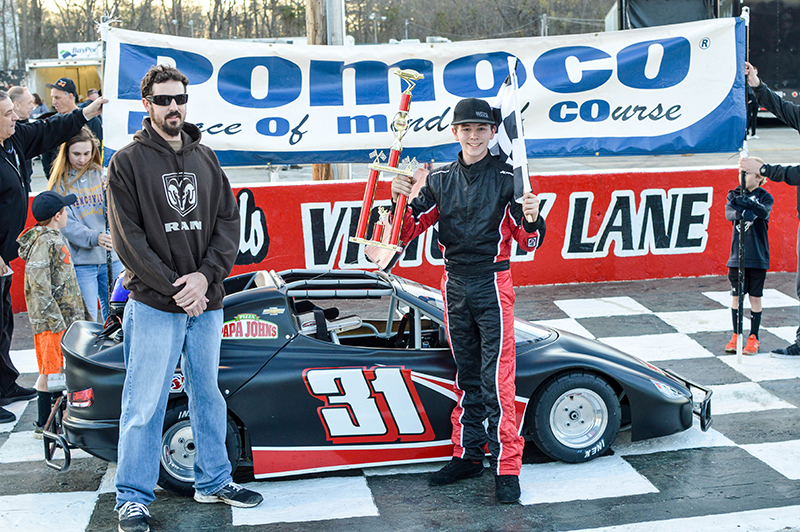 Cole Bruce was the afternoon pole sitter, setting the fast time at 21.548 sec of 66.976 mph and would show a field of eight Bandoleros to the green. Green flag would wave as Cole Bruce clearly established the race lead coming out of turn two. Marching his way towards the front was Bradley Kilby starting from the five spot on the grid. Kilby on lap three was able to get a bumper to the leader but that was as close as he was going to get as Cole Bruce would lead all fifteen lap’s of the race event. 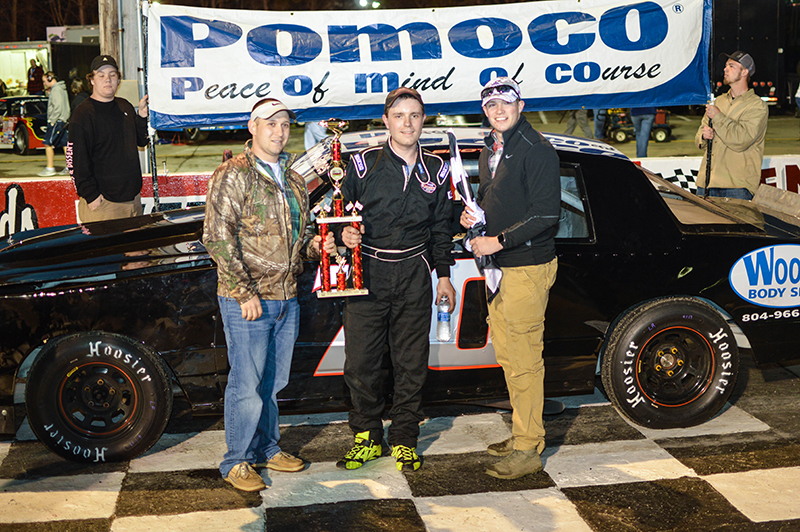 Renno Marchetti IV was the nights pole sitter with a hot lap at 18.693 sec or 77.419 mph. Fourteen Super Streets took the green flag with Marchetti showing the field into turn one. It wasn’t long before Marchetti had an easy five car length lead before the race’s first caution on lap five. Back to the green, Reno Marchetti was the race leader but soon after, the race would see its first lead change as Landon Abbott took the lead on lap sixteen. Abbott would have to withstand five race cautions and five charges from teammate Renno Marchetti before the lap forty checkered flag would fly. Landon Abbott was the race winner. “First off I gotta thank Bill Mullis and Chuck Hall, ya know last year we had to race at some different tracks. Its always good to come home. I can’t thank of them enough”.
1. #70 Landon Abbott (winner)
2. #01 Renno Marchetti IV
3. #12 Sean Calway
4. #22 Bill Eaker Jr
5. #46 Jason  Michaud
6. #15 Dale Parro
7. #54 Josh Perry
8. #54s Billy Newman
9. #05 Mike West
10. #20 Gordon Weeks
11. #21 Randy Akers
12. #26 Louie Pasderetz
13. #24 Sammy Gaita
14. #08 Dale Nichols 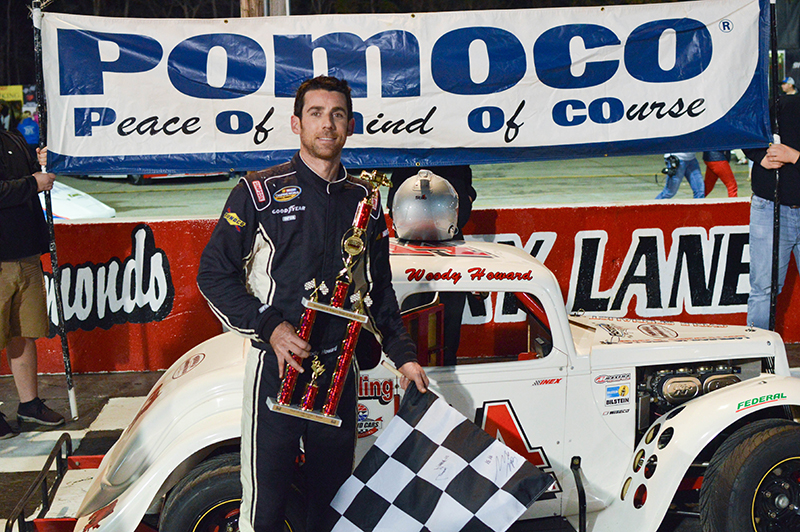 Tommy Jackson Jr was the fast qualifier in the Legends division sporting a lap at 18.096 sec or 80.0 mph. Green flag action began as Jackson would lead a strong field of seventeen competitors into turn one. But trouble comes by turn three when leaders Jackson, Cody Carlton would get together collecting Sparky West and Dillion Spain setting up a restart to the race. Woody Howard would become the new leader at the completion of lap one when the race was back under the green. Mason Diaz wanted some of that lead and raced Howard hard. But it was Howard who proved to be the stout car in the field and went flag to flag for the race win. “As soon as they drop the flag going into turn one and I noticed there was oil all on the bottom grove. Luckily I was able to straddle it and get below it which gave me a good run off the corner. Hate to see it for Tommy and all those guys, I was really looking forward to racing with them, I mean, they’re tough competition so I might not be sitting here had they not wrecked out”.
1. #14 Woody Howard
2. #24 Mason Diaz
3. #22 Brian May
4. #7 Spencer Saunders
5. #08 Jamie Price
6. #94 Cody Carlton
7. #7 Zach Lightfoot
8. #21 Layne Mckee
9. #33 Colby Flowers
10. #5 Whitt Seay
11. #19 Clayton Parrish
12. #2 Matt Kurz
13. #4 Chris Hayes
14. #31 David Brandt
15. #87 Tommy Jackson Jr
16. #72 Dillion Spain
17. #99 Sparkey West
18. #88 Ryan Center 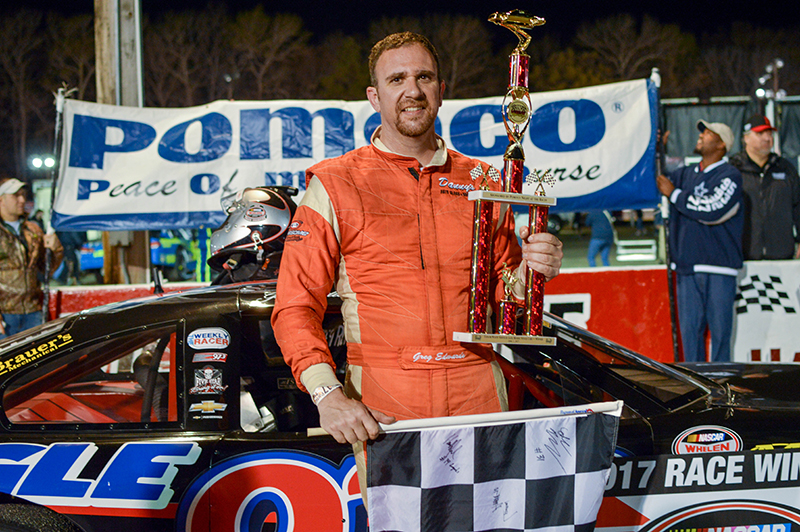 Nick Smith set the fast time in qualifying boasting a lap at 15.987 sec or 90.566 mph. Five time track champion Greg Edwards was a mere twelve thousandths of a second of the pole sitters time and would share the front row. Green flag waved as eighteen hot rods sounded off going into turn one as pole sitter Nick Smith sets sail. But mirroring his very line was Greg Edwards who by lap eight was the race’s new leader. Two cautions would slow down the fast pace but Greg Edwards proved to be much on the restarts. Lap traffic in the latter stages of the race would allow Nick Smith to close in on the leader but once in clean air, Greg Edwards took off. There was a great battle for second, third and fourth when Justin T Carroll, Matt Waltz and Mark Wertz battled for the next top spots. But back up front, it was Greg Edwards who crossed the stripe first. “I think there was some people riding with me tonight, this car is amazing, my dad, John looking down on us I really wanted it bad for these guys. I was going to give it everything I had, I ran that race as hard as I could for them, I knew they were riding with me and I thank God, that’s the most important thing. I’m so glad to be back here at Langley Speedway, we started where we ended it”.
1. #97 Greg Edwards (winner)
2. #57 Justin T Carroll
3. #55 Mark Wertz
4. #2 Matt Waltz
5. #12 Nick Smith
6. #33s Colin Cabre
7. #26 Danny Edwards Jr
8. #90 Terry Carroll
9. #03 Brenden Queen
10. #78 Maddie Crane
11. #92 Casey Wyatt
12. #77 Connor Hall
13. #19 Cameron Bowen
14. #25 Craig Eastep
15. #91 Justin Carroll
16. #33 Macy Causey
17. #12s Dean Shiflett
18. #8 Tyler Hughes 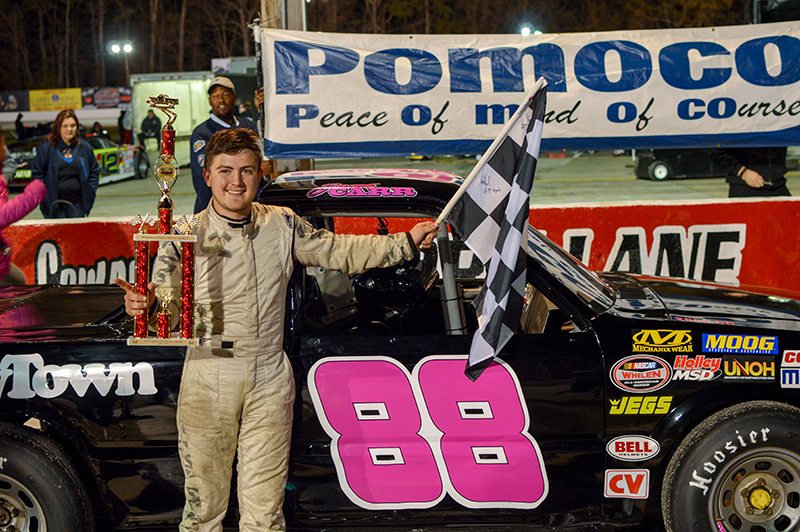 Brad Adams sat on the pole in the Super truck series with his fast lap at 19.060 sec or 75.789 mph as Dustin Mullins lap earned him a share of the front row. Race action began with the drop of the green and Brad Adams lead the field through turn one. Adams was in full control, mounting up an eight car length lead but by lap thirteen, Richard Ellis was within reach of the leader. For several laps the battle for the lead ensued when just 2 laps to go, Ellis and the leader tangle sending Adams around and ending up in the infield. The race remained under green but the black flag was displayed for Ellis for the spin involving race leader Brad Adams. Jacob Carr who ran a solid race benefitted crossing the stripe first to win the Super Truck event. “Just wanna thank my Crew Chief Rich, wanna thank Hobby Town, gotta a text this morning that he would come through and sponsor for me so I just want to thank him. Want to thank my crew, my family and girlfriend. Wish my daughter could be here but she couldn’t, want to thank Bill for getting the track back for us and thank God above to be here today”.
1. #88 Jacob Carr
2. #80 Ronald Klien
3. #19 Dustin Mullins
4. #62 Chase McAdams
5. #41 Richard Ellis
6. #31 Richard Quinn
7. #3 Brad Adams
8. #66 Wayne Lyon
PrevNext
X