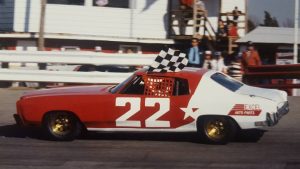 The following article about the history of Langley Speedway was written and published in 2010 by Hall Of Fame Sports Writer Al Pearce of the Daily Press, and Newport News, Va. Knight Ridder/Tribune Business News:

Langley Speedway roars into its 60th anniversary season with a well-established and well-earned reputation as one of NASCAR’s best weekly tracks. From its modest opening in 1950 as a dirt track with few amenities to today’s paved showplace, Langley has consistently stayed ahead of the competitive and administrative curve.

In the late 1940’s the property on North Armistead Avenue in Hampton was home to Dude Ranch, an 8/10th-mile oval for lower-level thoroughbred racing. The owners occasionally hosted stock car races, which generally attracted more fans than the horses ever had. The owners eventually shortened the track to 4/10ths-mile (clearly, 8/10ths was too long for weekly racing) and turned their attention to cars. Dude Ranch stayed a small, rough-hewn bullring until 1963, when ex-racer and local businessman Henry Klich paid $1,000 for the lease and promptly renamed it Langley Field Speedway.

More than anyone, Klich led the track into the “modern era” of stock car racing. He presented the Peninsula’s first Cup race in May of 1964, when Jarrett won a 250-lapper ahead of Panch and Buddy Baker. Jarrett came back almost a year later and won another 250-lapper, this one ahead of Dick Hutcherson and Elmo Langley. In 1966, Petty beat Hylton and Neil Castles in the spring race. A year later, during his historic 27-win season, Petty won ahead of Allison and Hylton in Langley’s last dirt-track Cup race.

Realizing that NASCAR was about to abandon its dirt tracks, Klich paid a local contractor $25,000 to pave Langley shortly before its May of 1968 Cup date. Pearson won that first paved-track show over Isaac and Buddy Baker, then repeated in August ahead of Petty and Isaac. In 1969, Pearson beat Hylton and Marcis in a 375-lapper, the track’s longest-ever Cup race. Isaac beat Allison and Castles in the May of 1970 and Allison beat Parsons and Hamilton in November of that year. Sharp-eyed readers and trivia buffs will note that every driver who won a Cup race at Langley had been or was going to win the NASCAR champion. 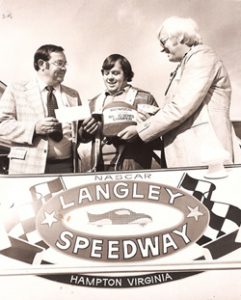 Klich retired as promoter late in 1969, but retained the lease and kept a close eye on things from his nearby home. Local car-builder Donnie Harris doesn’t think Klich (who died in January of 2001 at age 70) gets enough credit for starting Langley on its way to respectability. “He turned Langley from a Saturday night redneck get-together to real good racing,” he said of Klich, who briefly raced in lower-level cars at Langley in the 1980’s. “He did everything he could to make the speedway better, to make it successful. He brought in the best drivers he could find and made the public aware of what good racing really was.” A Daily Press headline summed it up best the day after Klich died: “He Made Us Major-League.”

During the early 1970’s, after Klich retired as promoter, Langley endured a series of well-meaning but generally overmatched promoters/track operators. Norfolk-area businessman and drag racing promoter Hank Hankins had the track for a while. When he left, a local group featuring Bob Wall, Carl Breen, Gene Hutchinson, Lee Cogdill and B.W. Mitchum took their turn. For the better part of a year, former TV sportscaster Charlie Bailey served as the track’s promoter/general manager.

To many fans and competitors, Langley Speedway’s savior was Joe Carver. (The track almost certainly would have survived without him, but in what form?) Tall, white-headed, confident and charismatic, the Charlie Rich-lookalike moved to Hampton from Nashville in the fall of 1973. He was on hand for a late-season show and was named Bailey’s replacement a few days later. He immediately set about rebuilding the track’s sagging image and stirring up what had become a complacent and inconsistent fan base. 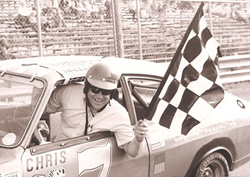 All told, Langley hosted nine Sprint Cup races between 1964 and 1970 and 14 Nationwide Series races between 1982 and 1988. In addition, it’s hosted ASA, Hooters Pro Cup, Goody’s Dash, Southern Modified and Grand American races. Among the ASA racers who came to Langley were a young, unknown Californian named Jimmie Johnson and a fourth-generation kid from North Carolina named Adam Petty. Then, there were the times a high school kid from near Richmond – his name was Denny Hamlin – came down each weekend with a purple No. 11 Mini-Stock. In the mid-1970’s a tall, thin, raw-boned kid from Kannapolis, NC came in for a Late Model Sportsman race. Later, Dale Earnhardt won a few Cup races and championships.

Not surprisingly, the promoters who took over when Carver returned to Nashville after the 1983 season never quite measured up. In their own unique ways, though, George St. Amand and Joe Baldacci improved the track, offered good shows and presented a comfortable environment. But it wasn’t until Wayne Wyatt and partner Jim Wood came along in 1995 that Langley began growing again at a steady rate. If Carver saved the track’s soul during his 10 years, Wyatt and Wood saved its body. 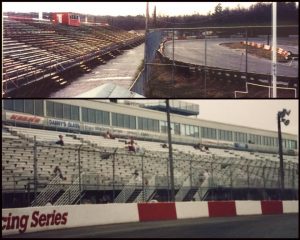 They operated Langley during the time of its greatest physical improvement. Between 1995 and 1997, Wyatt and Wood replaced the aging and unsightly steel guardrail with a concrete wall. They repaved the track and replaced the board-and-scaffolding bleachers with an iron-and-steel grandstand. They added more than a dozen skyboxes and VIP suites, and a modern race control and media booth. It’s is believed that Langley was the first NASCAR-sanctioned weekly track with skyboxes and suites accessible only by elevator.

Wyatt brought in Dwight Schaubach as his financial partner in 1999, and they worked together through the 2004 season. Sandy Lemonds and her racer/husband, Dale, bought the lease late in 2004. When Dale was killed at Langley in August of that year, Sandy and her brother, King Hodges, operated the track in 2005 and part-way into the 2006 season. When King finally succumbed to a lingering respiratory disease in April of that year, Sandy chose to turn over day-to-day operations to long-time friend Lou Gotti, her late husband’s former Legend Car crew chief. 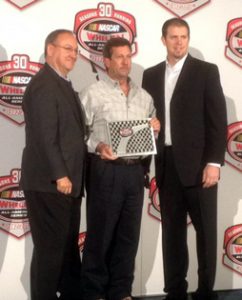 In the spring of 2009, with the economy taking a toll on local short-track racing, the cash-strapped Gotti sold the track to former racer/area businessman Bill Mullis. Mullis much like Klich raced support divisions at Langley, South Hampton and Southside Speedway. Mullis plans on writing the next chapter of Langley’s history, he started by bringing in former Promoter Chuck Hall, and by continuing the compassion as a racer and respect for the speedway as a business. To initiate his goal Mullis has secured top racing events and series in just his 1st year including, the prestigious INEX Nationals for October 2010. The INEX Nationals are a 1st for the entire state of Virginia. Also on the list are two USAR Pro Cup series races (formally Hooter’s Pro Cup), the NASCAR Whelan Southern Modified Series and the NASCAR home track sanctioned racing all in 2010. With fan support growing to record numbers Bill Mullis has dedicated and directed his mission to making the grand ole Langley Speedway shine once again. Langley Speedway celebrates 60 years of racing excellence in 2010, and Bill Mullis and his staff prepare to help write the next chapter for Langley Speedway.