“Thomas Roofing Night at the Races”

After last week’s race action cancelled from the wet weather, unseasonably cooler weather was welcomed to the speedway as race action resumed at the .395 mile oval. Eight race features from six race divisions highlighted the evening where the Larry King Law Modified’s, Pepsi Grand Stocks and the Cycle City Corp Legends were all in action. Also returning to race duty was the Riverside Paper Pro Six’s, Carroll’s Automotive UCAR’s and the Cycle City Corp Bandeloros. With divisional series points shaping up in each division, a much anticipated weekend here at Larry King Law’s Langley Speedway for, “Thomas Night at the Races”. 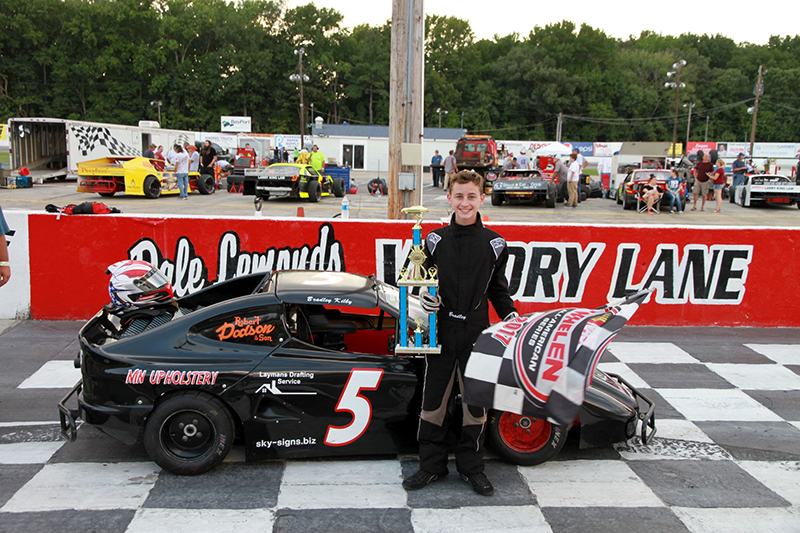 Cycle City Corp Bandeloros 15 Laps: Autumn Weaver was the fast qualifier posting her pole position lap set at 21.696 seconds. Cole Bruce would start shotgun to the pole sitter followed by Bradley Kilby and Jacob Derrick in row two. Green flag was displayed and right from the start, the pole sitter was under fire from Bradley Kilby who would eventually get the lead on lap two. Side by side the two would battle but soon after, Kilby would get position on Weaver as the field would go single file. Jacob Putman was on the move running third as laps were counting down but back up front it was all Kilby and Weaver. Final laps the two were nose to tail coming to the line with Bradley Kilby holding off the charge of Autumn Weaver for the race win. 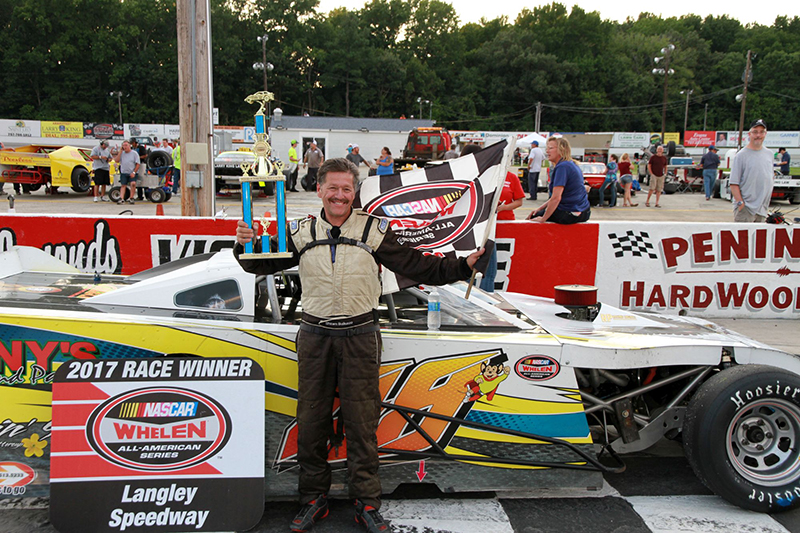 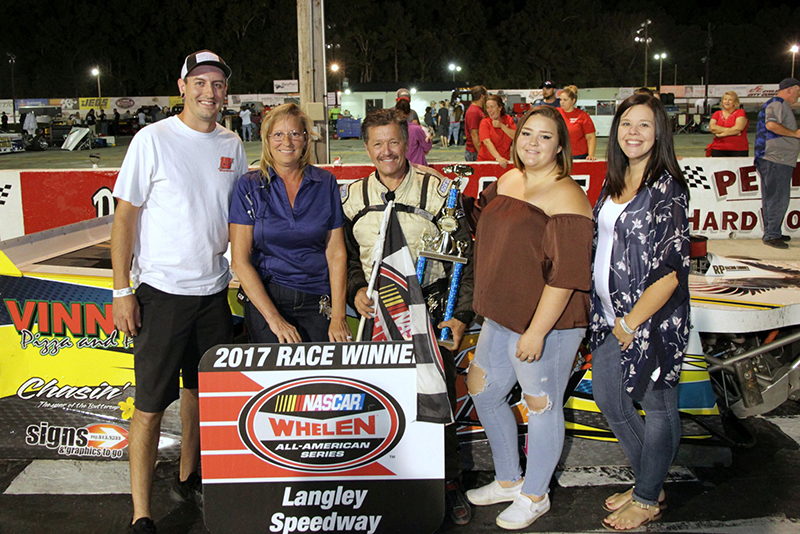 Larry King Law’s Modified’s Twin 33 Laps: Matt Carter continued to surprise the division by laying down a lap at 16.784 seconds for the pole which knocked off Shawn Balluzzo’s effort but certainly worthy of a share of the front row. Matt Slye, Danny Harrell and Andrew Fortin were the five best in qualifying. The green flag waved for the first of twin race events with pole sitter Matt Carter securing the point by turn two. Several laps into the feature saw Carter build a six car length lead over Balluzzo as Andrew Fortin was coming up through the field in fourth. The halfway was shown to the leaders with Carter still showing the way but he and Balluzzo had checked out from the rest of the field. Soon after, Balluzzo was able to collapse the lead of Matt Carter and would pass the leader as the race was entering into the latter stages. Once by, Shawn Balluzzo set sail and would go on to win the first of twin Modified race features on the night. Balluzzo from Victory Lane, “We kinda thought that Matt would give up later on, he’s got a really great car and a really great motor”, said the race winner. “Every week our car gets better and better, the guys that have been maintaining it, everybody has been doing a great job”.

In the second Modified race feature, race winner Shawn Balluzzo elected to start at the rear of the field to try and earn maximum points in National points series. The mandatory eight car invert was given to the field and starting on the pole was Bobby Gery. Green flag waved and it was Jamie Sample who would lead lap one. But the action continued at the front as Bubba Johnston would take the lead in the beginning portions of the feature. But right back came the efforts of Jamie Sample to regain the lead as the battle for the top spot ensued. After a brief caution to the race, Sample would continue his race lead as the halfway was shown to the field. Race one winner Shawn Balluzzo at this point was blowing through the field and would eventually catch the leader. Wasn’t long before Balluzzo would get by Sample for the race lead and would motor to the checkered flag sweeping both twin race events at Larry King Law’s Langley Speedway. Balluzzo had this to say from Victory Lane. “We were waiting for two in a row, I was really excited for two in a row for the guys, they were really excited”, shared Balluzzo. “I want to thank Robin Nichols, up in the skybox for all her help and support and my wife Terri Balluzzo with my kids”. 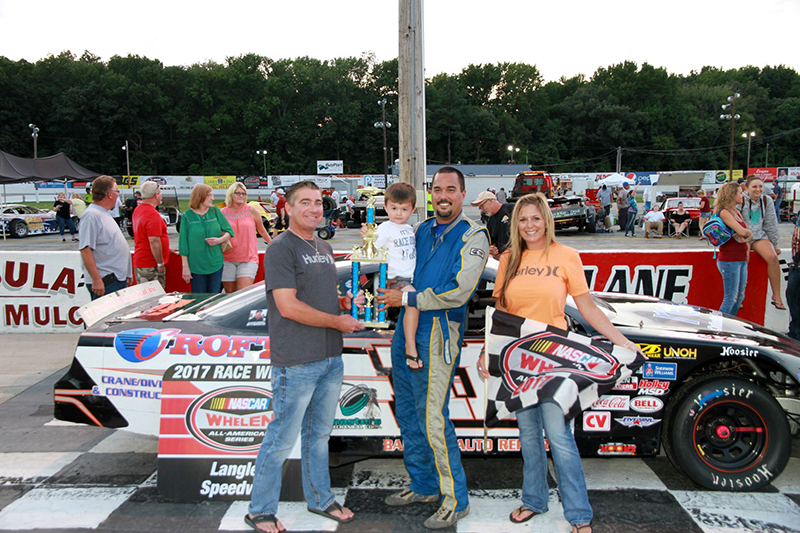 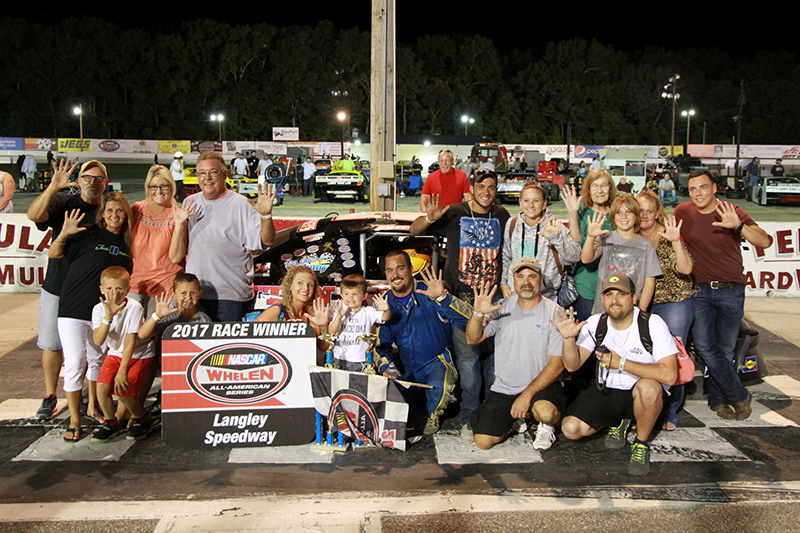 Pepsi Grand Stocks Twin 25 Laps: Rodney Boyd nabbed up the pole spot in the grid with a lap at 18.401 seconds. His lap bested rival competitor Tommy Sweeney’s effort by just twenty two thousandths setting up what was going to be an exciting beginning in the Grand Stock race division. Green flag would wave as pole sitter Rodney Boyd lead the field into turn one. Quickly was the pole sitter out in front but just as quickly was Tommy Sweeney running down the race leader. After a series of nose to tail laps and the occasional bump from the rear, Tommy Sweeney would take the race lead shortly before the halfway. Mark Frye and Paul Lubno were having a bump session of their own trying to decide third and fourth on the grid. But back up front and in clean air was race leader Tommy Sweeney who would go on to win the first of twin race events in the Grand Stock race division. Sweeney had this to say in Victory Lane, “I tell ya what, this is the best the car has ever been, this thing was on a rail tonight”, claimed the race winner. “Without a doubt, it’s going down the straightaway, once we got a big enough lead, we just went into riding mode and tried to save tires for the second race. But yeah, it’s on a rail, it’s doing everything I want it to do”.

In the second Grand Stock race feature, the automatic eight car invert was given to the field and after race winner Tommy Sweeney elected to start in the rear, the race soon began. Starting on the pole and taking the green was Shawn Scovel who would lead lap one. On back, Tim Wilson and Rodney Boyd were making moves to the front with Wilson taking the lead from Scovel. A few laps later, here would come Rodney Boyd to take the race lead as the halfway point is concluded in the race. Tommy Sweeney soon found himself running second after starting from the rear chasing down the leader Rodney Boyd. In the latter laps of the feature, Sweeney was able to get by Boyd for the race lead and from there, Sweeney would sweep the evening twins winning both race features. Sweeney again from Victory Lane, “Oh yeah without a doubt, the support group I have is bar none the best out here”, claimed the race winner. “I’m glad that I can reward them, taking pictures here in Victory Lane. I told the guys earlier this week that I wanted to break the number of wins I had in one season. So, I succeeded in my goal and I have just one more goal left hopefully we can get that at the end of the season. But this one is definitely for Kenny Alves, I know he’s smiling down on us and my Uncle John, I hope they are enjoying this as much as we are”. 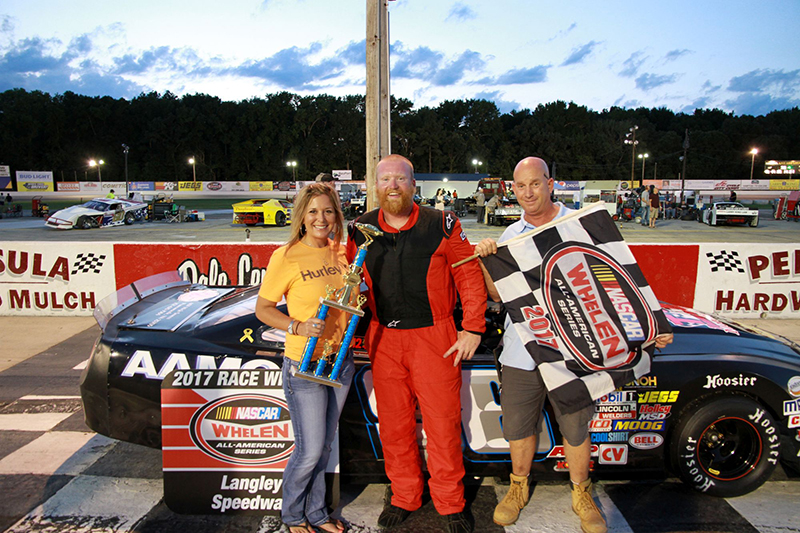 Riverside Paper Pro Six’s 30 Laps: Adam Florian returned to a familiar starting spot on the grid by taking the race pole with a lap at 17.483 seconds. The hot wheel of Travis Wall would start second for his share of the front with Jordon Wood, Tyler McLaughlin and JB Sipe completing the five best in qualifying. Green flag would wave as the front row leaders fought side by side before the pole sitter Florian gained the upper hand to secure the spot. Both Florian and Wall would easily check away from the rest of the field building up a sizable lead as Bobby Hall was the next best ride coming through the field in third. Several laps later, the best racing was found further back in the field as Hall, McLaughlin and Sipe were all nose to tail battling for the third spot on the grid. But back up front, the night and the race would go to Adam Florian crossing the stripe first picking up his fourth win on the season. Florian from Victory Lane, “Yeah, we struggled a little bit but we never stopped, kept working on the car every week trying to get it better little by little”, said Florian. “Tommy Spencer and my dad, they busted their butts off trying to get this car back together, we got a good car now and have something to work with for the rest of the season”. 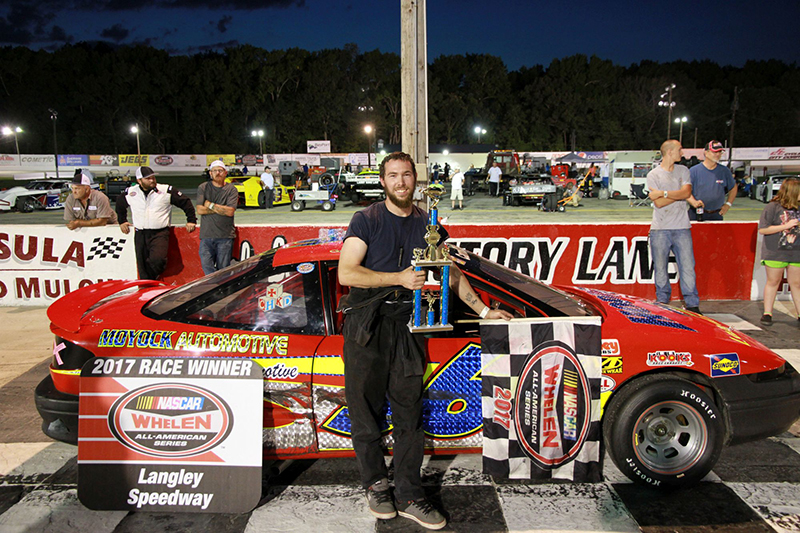 Carroll’s Automotive UCAR’s 20 Laps: Michael Waters continued his dominance in the UCAR race division earning his fourth pole on the season. Eric Schaffer would start alongside of Waters with Tommy Gildea and Jesse Jones in row two. Race action was over the speedway and leading lap one of the event was Eric Schaffer. Schaffer would lead several laps before a slip in of turn four and taking advantage was Michael Waters to assume the race lead. On back in the grid, Jesse Jones would get by Tommy Gildea for third but back up front, Michael Waters would keep the rest of his competitors in his mirror. A late race caution would give Schaffer, Jones Gildea one last shot at the race leader but Waters would have nothing of it and would go on to win. Michael Waters from Victory Lane, “Yeah, I thought he was going to try and turn me in turn on but I just had enough there to keep it straight”, explained Waters. “As soon as that caution came out I said awe man, here we go. So, I knew I had to get him on the start, then when Jesse gave me that shot I knew I had him cleared”. 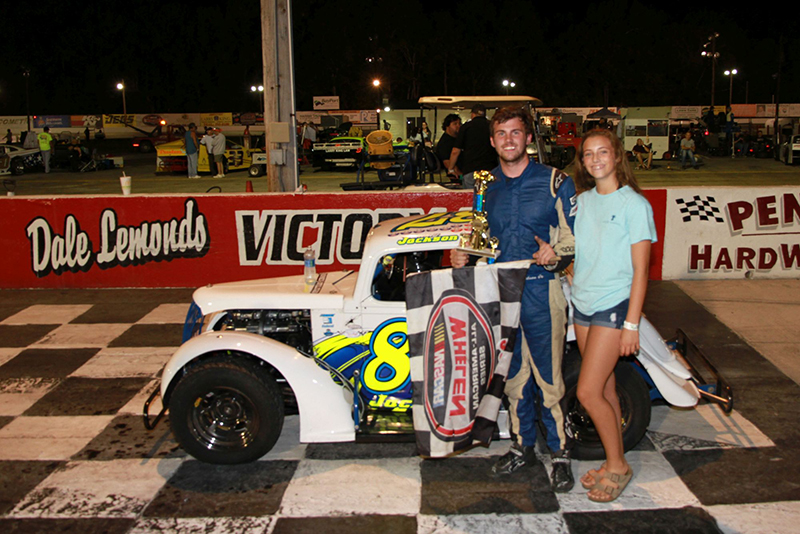 Cycle City Corp Legends 25 Laps: Tommy Jackson Jr continued his qualifying dominance by posting his fourth pole on the season. His lap at 18.134 seconds was better than the lap of Cody Carlton for a share in the front row. On back and showing speed was Spencer Saunders, Brian May and Jamie Price who were the five best in qualifying. Green flag waved as Tommy Jackson would lead lap one. Spencer Saunders was an early mover getting by Carlton for second and harassing the race leader in the early laps of the race. Several laps in, the battle for the lead began with Cody Carlton waiting in the midst just behind Saunders still in second. Latter portions of the race, Saunders would get to the bumper of the leader but that would be as close as Saunders would get as Tommy Jackson crossed the stripe first. Jackson from Victory Lane, “Me and Spencer were teammates years ago, it’s a lot of fun running really competitive as he has great cars. I was really loose during the race but it was good enough. I just want to thank all the fans for coming out tonight”.