Hampton, VA (April 28, 2018) – After last week’s exciting and successful 2018 Denny Hamlin Short Track Showdown before a pack house full of fans. NASCAR’s K&N East Race Series comes into town continuing what has been a thunderous start into the 2018 race season at Larry King Law’s Langley Speedway. The K&N East Series race series has groomed several racing talents such as Kyle Larson, Joey Lagano and William Byron whom all are featured drivers in NASCAR’s Premiere Sprint Cup Series division. Many other of the K&N East Series alumni stars are also found in the Xfinity and Craftsmen Truck Series as well. Also, in race action were the Old Skool Video Games Super Streets, Riverside Paper Pro Six, Cycle City Corps Legends and Carroll’s Automotive U-Cars. Here’s a recap of all the thrilling race action on the night. 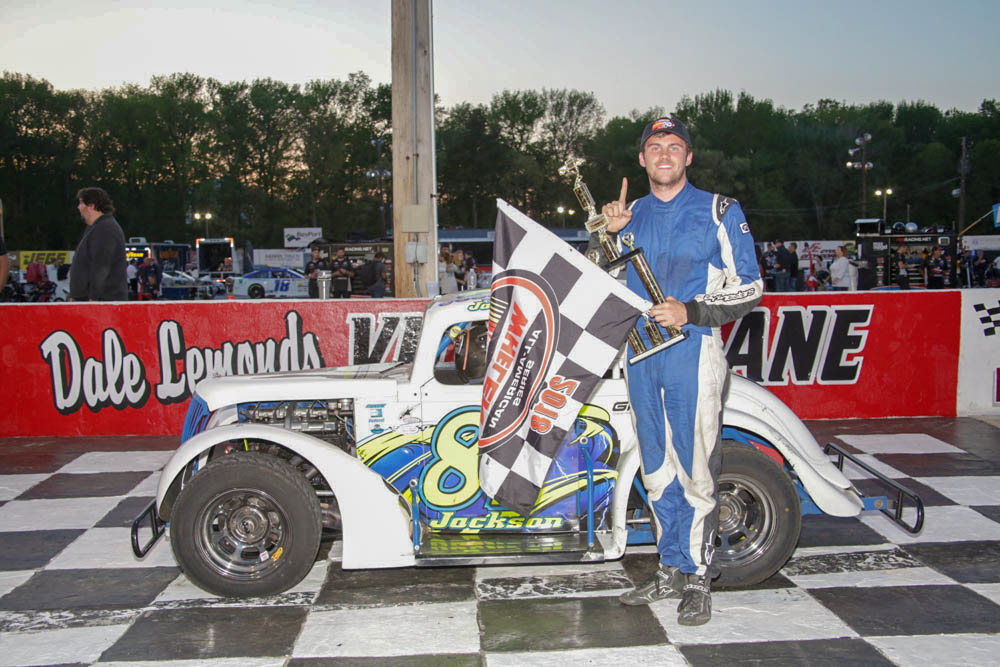 Cycle City Corps Legends 25 Laps: Current Legends series points leader Spencer Saunders nabbed up his second pole on the season posting his fast lap at 17.773 seconds. Tommy Jackson Jr who has been nearly equal to the points leader would get the two spot on the grid just twenty four thousandths off from the pole speed. Jamie Price, Ryan Matthews and Daniel Sylvestri rounded out the five best in Legends qualifying. Green flag was displayed to the field and after a brief battle for the race lead, pole sitter Saunders would lead lap one. But the lead was short lived as Tommy Jackson Jr was able work his way by for the race lead. Laps later saw second through fifth all nose to tail but the leader Jackson, had mounted an eight car length lead. Just past the halfway, the lead would disappear courtesy of the races first caution and bunching back up the race field. Back to the green, Tommy Jackson Jr would hold off the charge of Spencer Saunders who then continued his torrid pace. From there, it was all Jackson who would go on to win in Legends race action. Tommy Jackson Jr from Victory Lane, “She was good, the car was good all day. We were able to keep up with the track conditions adjusting to the Goodyear K&N rubber. I slipped a bit in qualifying but we knew we had a good car in the long run so I was really confident going into the race. Always great to get back to Victory Lane and look forward to chasing more trophies”.

Carroll’s Automotive U-Cars 25 Laps: In U-Car race action, Austin Davis sat his hot rod on the pole posting up a 19.189 second lap. Courtney Shifflett earned the second spot on the grid and a share of the front row. Brandon Wood, Tillman Heuer and Richard Ellis completed the top five in U-Car qualifying. Out came the green and into turn one did the nine car field go but it was without pole sitter Austin Davis with troubles at the start. Courtney Shifflett would assume command as the leader with Tillman Heuer in tow. Coming through the field from the eight spot was Tommy Gildea who would later challenge Shifflett for the lead. Lap traffic soon came into play sparking a three wide battle for the lead with Tommy Gildea taking the lead just shy of the halfway. After a brief caution, Heuer and Ellis would battle for second on the restart allowing Tommy Gildea to get away. From there, it was the break Gildea needed and went on to win in U-Car race action. Gildea from Victory Lane, “It was either high or low, so I went low and it stuck. I want to apologize to the fourteen, I didn’t mean to get into him. I just kept driving it in, driving it in and then I let him try to gather it back up so I hope there’s no hard feelings. Thank everybody for coming out, NASCAR, Bill Mullis, Langley Speedway, thank my wife and kids for putting up with all this.” 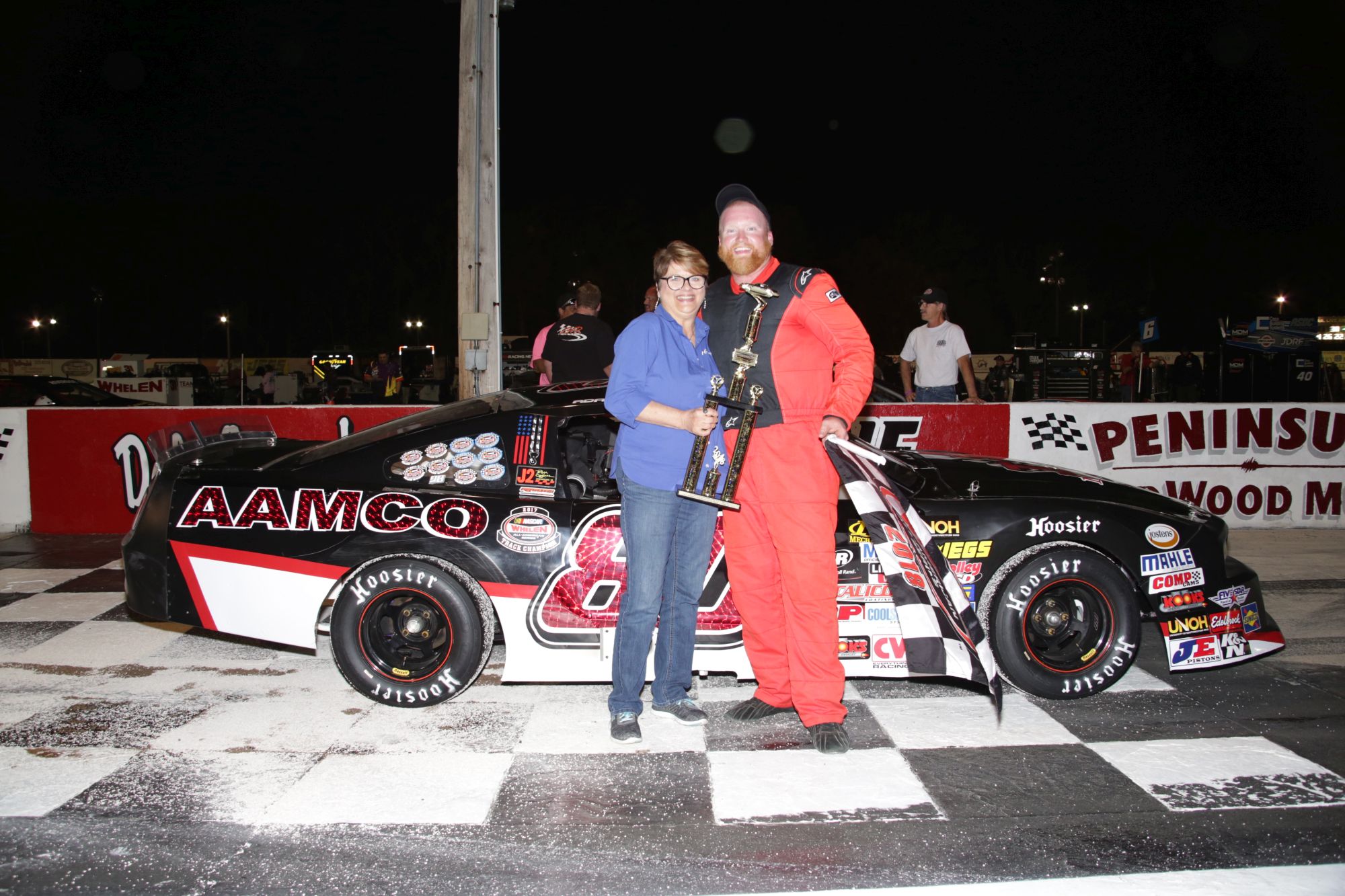 Riverside Paper Pro Six 30 Laps: Making their first appearance in the early race season at Larry King Laws Langley Speedway. Pro Six’s took to the afternoon qualifying with Adam Florian on the pole sporting up a 17.036 second lap. Travis Wall narrowly missed the pole by just fourteen thousandths but worthy to the outside in row one. Bobby Hall, Casey Sipe and Tyler McLaughlin rounded out the Pro Six qualifying best. Green flag waved to the pole sitter Adam Florian who then secured the lead out of turn two. But on the heels of the leader was Travis Wall who mirrored the leaders line. Bobby Hall had a brief shot at the leaders early but would fall off and ride third in the grid. Nose to tail were the two leaders before the races first caution just laps away from the halfway. Back to the green, an exciting restart as Adam Florian, Travis Wall and Bobby Hall would battle. Florian would once again emerge as the race leader as Wall had to settle for second. With Wall giving chase, the leaders continued to battle nose to tail. Travis searched high and low for a way around Adam Florian but it was not meant to be. Adam Florian wins the Pro Six season opener. Florian in Victory Lane, “I knew that I had to drive it into the center of one and two right there on them restarts because they were all on my rear. But I got to thank all my sponsors, Travis Wall, he’s one heck of a racer. We’ve been racing against each other since we were eight years old. He’s always raced me clean, I enjoyed the competition and that’s what it’s all about.” 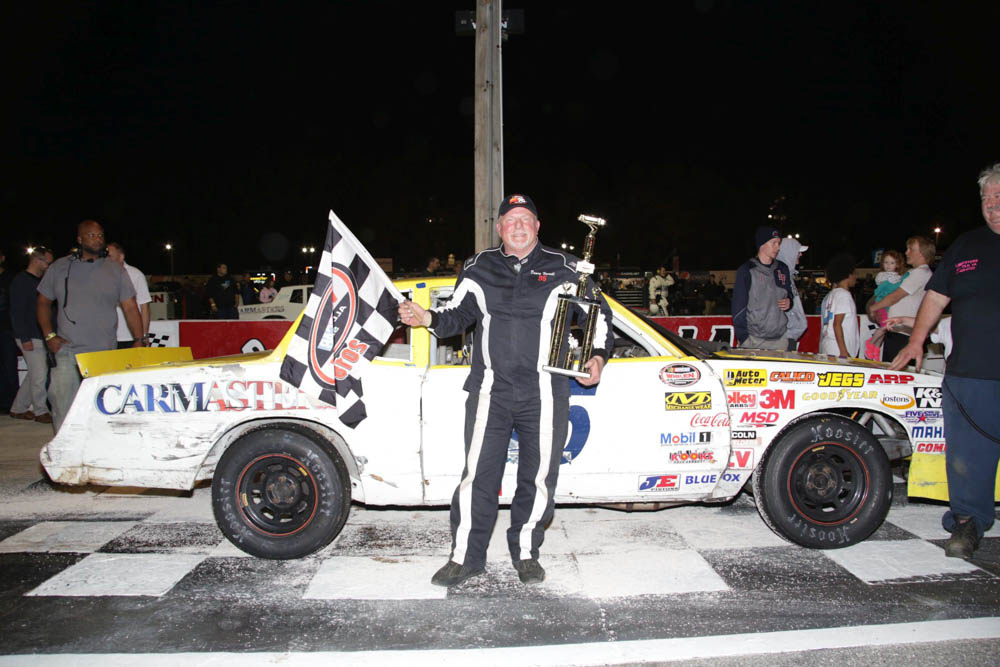 Old Skool Video Games 40 Laps: Landon Abbott had the hot wheel in Super Street qualifying picking up the pole with a lap sat at 18.706 seconds. Bill Eaker would get the shotgun spot on the grid in row one followed up by Dale Parro, Gordon Weeks and Jason Michaud as the five best in Super Street qualifying. Green flag was displayed to the fourteen car grid and the early race lead belonged to Landon Abbott. But the action soon heated up when Bill Eaker was able to get by the leader and along with him came Dale Parro for second. After a quick caution, the restart was hot once again for the race lead when Landon Abbott took back the top spot. On the next lap, Eaker would then challenge Abbott, turning the race leader and bringing out the race caution. On the ensuing restart saw Sean Calway as the new front man, Dale Parro would be hot in the race leaders tracks but soon after, the leader had built a five car length lead. Pass the halfway as Calway and Parro were having they’re way, the best racing was found in spots third through fifth. Dale Nicohls, Danny Harrell and Randy Akers were battling hard but back up front, Parro caught the race leader. Then the caution waved resetting the grid and setting up yet another restart to the race. Back to the green, Randy Akers in a three wide move took a turn at the lead but right back came Parro as the race leader. After more contact with the leaders and a green, white, checker finish, Danny Harrell inherited the race lead and would go on to cross the stripe first in a Super Street thriller. Harrell from Victory Lane, “Been working on this thing the past three or four days and changed the rear gear where it then still just didn’t pull right. So, we went back to what we had, I just sat there and rode it out, I knew this was going to be an endurance race. You know, we can’t do it if not for these guys right here and for all these fans that came out.” 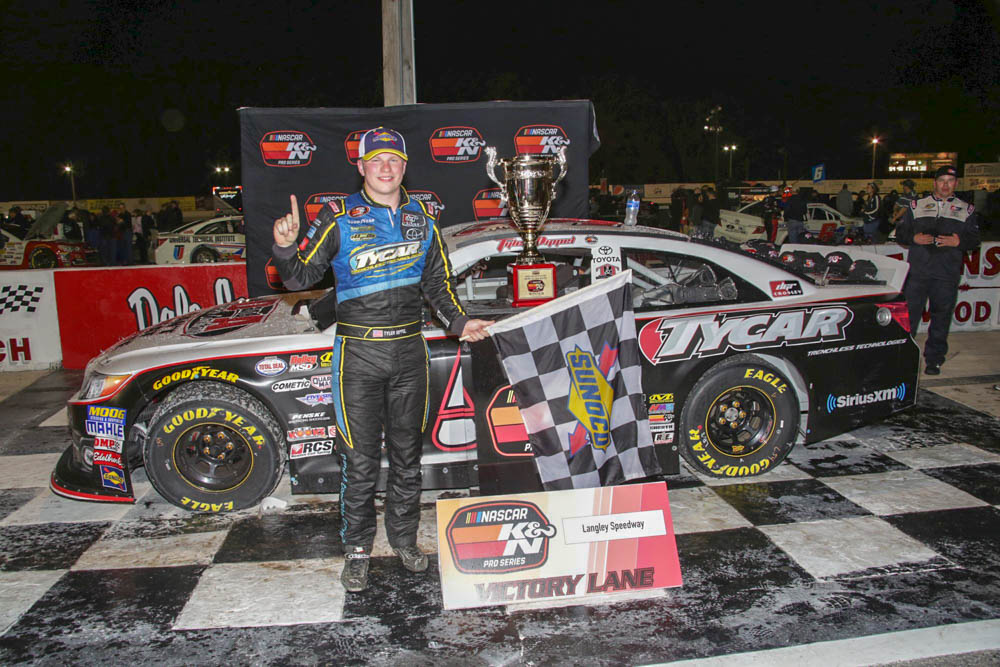 K&N East Series 150 Laps: Tyler Dippel would get the pole spot and also set a new K&N East Series track record at Larry King Laws Langley Speedway. The record setting lap was set at 15.510 seconds as Tyler Ankrum would start shotgun to the pole sitter only seventy three thousandths off the speed of the pole sitter. Anthony Alfredo, Ruben Garcia Jr and Grant Quinlan were the five best in group qualifying. Other notables were Langley Late Model regulars Connor Hall seventh and Justin Carroll eleventh. Green flag waved and the battle for the lead began. Pole sitter Tyler Dipple would prevail early but surrendered his race lead laps later to Anthony Alfredo. Early movers to the feature saw Grant Quinlan, Ruben Garcia Jr and Marcos Gomes running in the top five. In chasing the leader, Marcos Gomes worked his way around to take a turn as the race leader and soon mounted a half a straightaway lead. For the pole sitter Dipple and row one partner Ankrum, both soon found themselves on the tail end of the lead lap which may have been on purpose. Many laps later, it was evident the field was in full conservation mode and tire management. Connor Hall, Colin Garrett and Justin Carroll were some of the strongest running fourth through sixth before settling in on tire conservation of they’re own. But then the caution waved at the seventy five lap halfway break which would be an option for race teams to come to pit road for adjustments. Marcos Gomes, Anthony Alfredo, Grant Quinlan, Justin Carroll and Colin Garrett were the top five at the break. Green flag waved once again and race leader Marcos Gomes would spin the rear tires giving up the race lead to Anthony Alfredo. Later in the green flag run saw Alfredo continue his march up front with Grant Quinlan holding second. Tyler Ankrum was moving up through field in third before the races first real caution. Just shy of the century mark the race continued under green as Anthony Alfredo set sail as the leader. Soon after, the two cars that elected to ride in the back early, Tyler Dipple and Tyler Ankrum, was now second and third on the grid. With thirty laps left in the feature, Tyler Ankrum was closing in on the leader Alfredo. With less than ten laps left in the event, business picked up when Tyler Ankrum took the race lead but would lose it a turn later back to Alfredo before the caution flew for Ankrum’s spin. Back to the green and the final restart, Tyler Dipple now would have the race lead and from there would close the deal by winning the, “Visit Hampton 150”. Tyler Dipple from Victory Lane, “Yeah man, this thing was on rails all weekend, I just can’t thank these guys enough, they’re all stars on this team. It’s just been so long overdue man this win means so much to me and it feels so good to get back here in Victory Lane”.