Hampton, VA (7-7-18) Much appreciated cooler weather was in the air at Larry King Law’s Langley Speedway but in no way could it cool off the race action that was scheduled for this day. Just as hot were the series points championships which for the most has seen consistency but one bad finish and the consequences take hold. No doubt about it, the race drama is in full swing and certainly, race fans don’t want to miss out. Highlighting the evenings festivities would feature twin race action from the Taylor Waste Services Late Models. Cycle City Corp Bandoleros and Legends are back this week with the Harris Truck Shop Super Trucks. Also featured in this week’s race action is the always eventful Pepsi Grand Stocks and Bojangles Enduros. The action was fast, the sound was loud and here’s a recap of how it all went down. 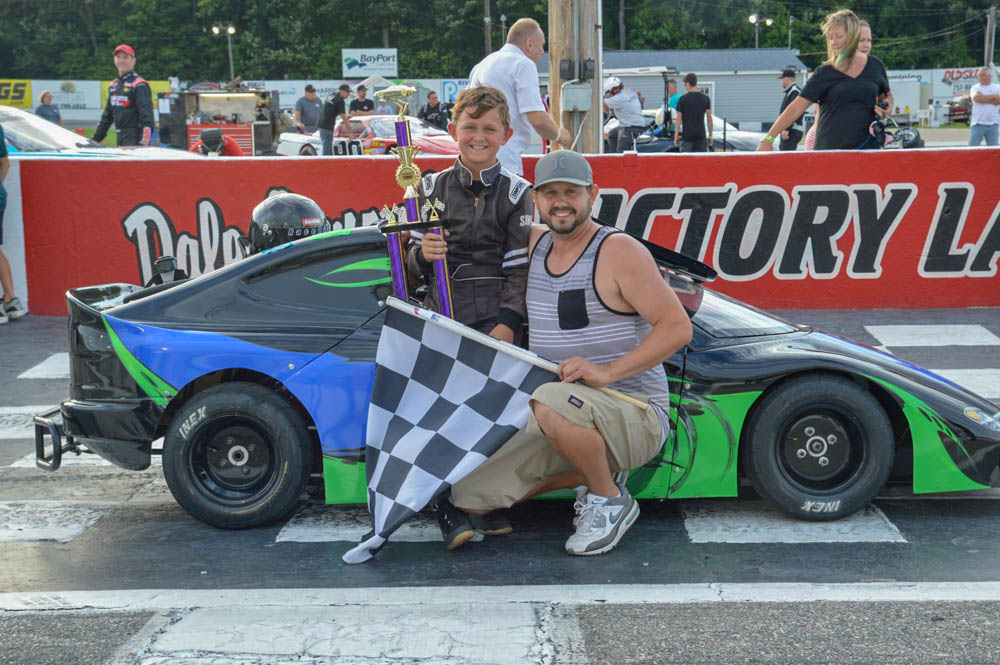 Cycle City Corp Bandoleros 15 Laps: Layton Harrison was the fastest in Bandoleros qualifying. The time of that pole lap was set at 21.089 seconds with Ryley Music earning the second spot on the grid. Jacob Derrick, Logan Clark and Autumn Weaver were the top five fastest in Bandoleros qualifying. Green flag was giving to start the evenings racing and pole sitter Layton Harrison quickly established the lead. Autumn Weaver was up on the wheel as was Alek Andrecs showing second and third early in the race. Just before the halfway, Ryley Music would make his way back to third but then the race had its first caution. Both Autumn Weaver and Logan Clark were involved and were not able to continue. Back to the green, Harrison continued to show the way but Jacob Derrick wanted to lead and so he did. But back came Harrison and for the final laps, both Harrison and Derrick traded turns as the leader. Last lap was exciting as the two beat and banged out of the final corner an crossing the stripe first was Jacob Derrick. In Victory Lane, Derrick was a young man of very few words. When asked about how the win feels, “It feels good!” 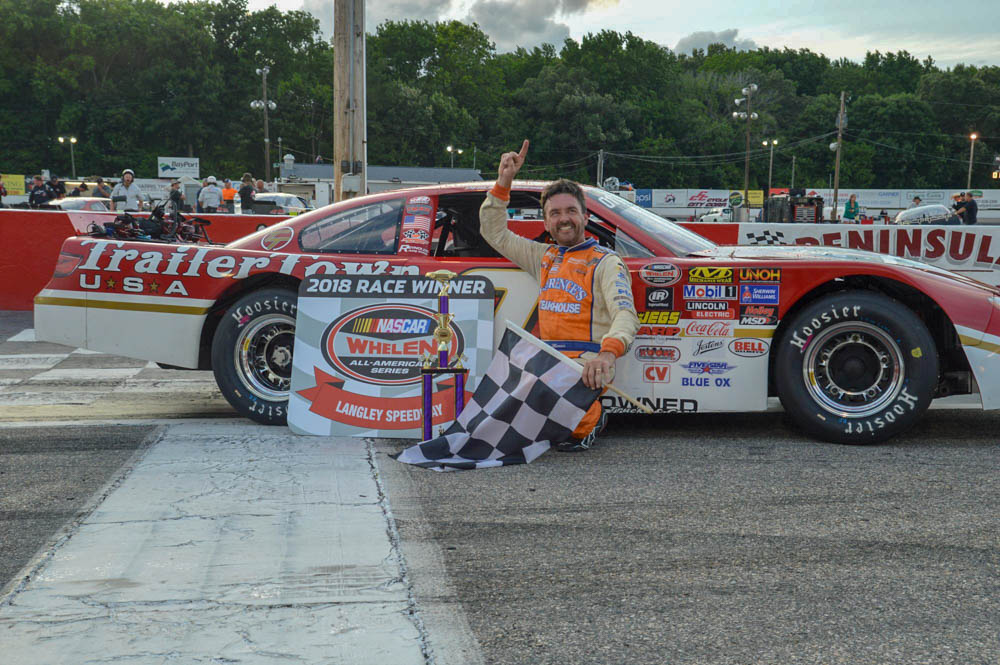 Taylor Waste Services Late Model Twin 75’s: Philip Morris was back in race action at Langley Speedway and was also back on pole showing off a 15.639 second lap. Danny Edwards Jr would start second on the grid after his qualifying run followed by brother Greg Edwards, Brenden Queen and Garrett Bunch as the Late Model division best in qualifying. Green flag would wave and the fifteen car field roared to life. Emerging from the first corner and with the lead would be pole sitter Philip Morris. Early laps saw Morris get away from the field with the exception of Danny Edwards Jr who was within one mistake of the leader. On back, Garrett Bunch found his way to third, series points leader Mark Wertz from the ten spot would make his way to fifth as the halfway then loomed. At the halfway, Danny Edwards Jr would haunt the rear of race leader Morris’s rear bumper but just as he could close, Morris would then get away. Laps later in the event, the battle for lead would pick up when from the outside, Danny Edwards Jr took a turn at the lead. But the lead was short lived when Edwards Jr slipped out of four handing the lead back to Morris as the laps where whining down. Danny Edwards Jr would mirror the line of the leader but could not close, Philip Morris wins. Morris in Victory Lane, “He was setting a blistering pace there and we didn’t know if we were going to be able to run with him (Danny Edwards Jr). But once he got around me I saw him using a lot of race car up, I just followed, paced him, got to his spoiler, made him loose and went on”. 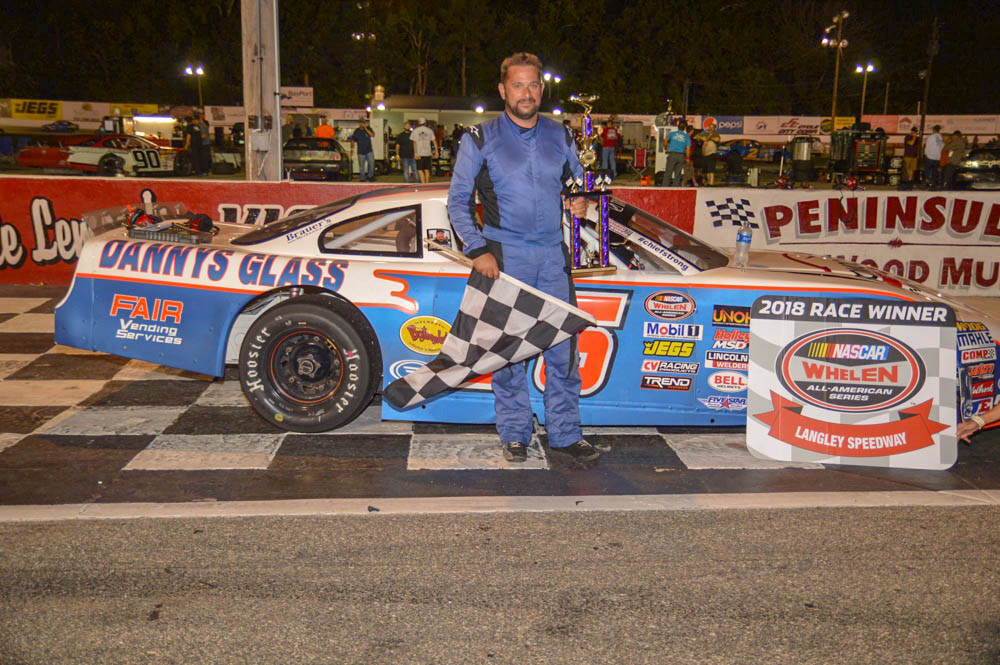 In the Late Model nightcap, by virtue of NASCAR’s mandatory eight car invert, race one winner Philip Morris would be forced to start eighth on the grid but elected to start in the rear for max national points. Greg Edwards would get the top spot to start the race when the green flag waved. Under green, Greg Edwards would lead lap one of the event when the caution then waved for Mark Wertz. Back to the green, Greg Edwards would stay on point with early movers Justin S Carroll, Justin T Carroll and Brenden Queen all in tow. After another caution period to the race, Greg Edwards quickly established the race lead and mounted just as quickly an eight car length lead. Connor Hall would pace the track in second when just before the halfway, the third caution flag waved. Past the halfway saw Justin S Carroll in a battle for second with Connor Hall before taking the spot. Danny Edwards Jr who had earlier issues with a tire that went down was closing in on the leaders in third. Latter stages of the feature saw Danny Edwards Jr finally have to use the bumper to get around Justin S Carroll for second. Lap after lap, Danny Edwards Jr would pick away at the lead of Greg Edwards when on lap sixty seven, Danny Edwards Jr took the race lead. From there, Danny Edwards Jr motored on and crossing the stripe first would be Danny Edwards Jr. Edwards from Victory Lane he had this to say. “We started the second race there and something didn’t feel right and it was really loose. Thought that the track bar was broke but the left rear had four pounds in it, luckily, we caught the caution when we needed it. Gotta thank the guys on this team, man they work so hard and keeping up with me”. 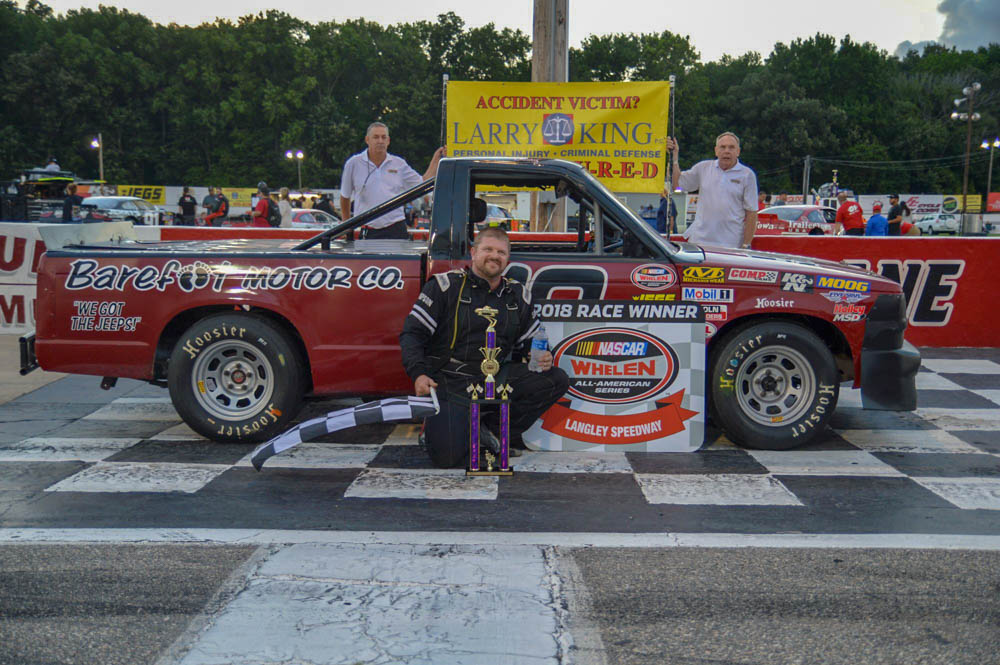 Harris Truck Shop Super Trucks 25 Laps: Dustin Mullins picked up the Super Truck series pole setting the grid with a 19.016 second lap. Keith Wheeler would get a share of the front row with the second fastest lap in qualifying. Jacob Carr, Richard Quinn and Rick Poust were the series best in the afternoon time trials. Green flag waved and from the outside, Keith Wheeler had the better start than the pole sitter to lead lap one. Laps later, back would Dustin Mullins regain the race lead leaving Wheeler to tuck back in for second. Jacob Carr wanted a turn at Wheeler for the two spot but the races first caution spoiled that effort. Back to the green, Mullins quickly did away from the field but soon the race was back under caution when Wheeler and Carr got together in turn one. Ensuing restart saw Dustin Mullins quickly mount up a sizable lead who was being chased by Ryan Huff in second. But Mullins was money in this race feature and would go on to win in Super Truck race action. Dustin Mullins from Victory Lane, “Thank you very much, I tell ya what, the other guys are coming and they are coming quick. I got to get out there and run like a scared dog. We got a bit of a clutch problem its hard to get a good of a start so were going to try and work that out. Its fun racing with these guys, the trucks are close and its good fun”. 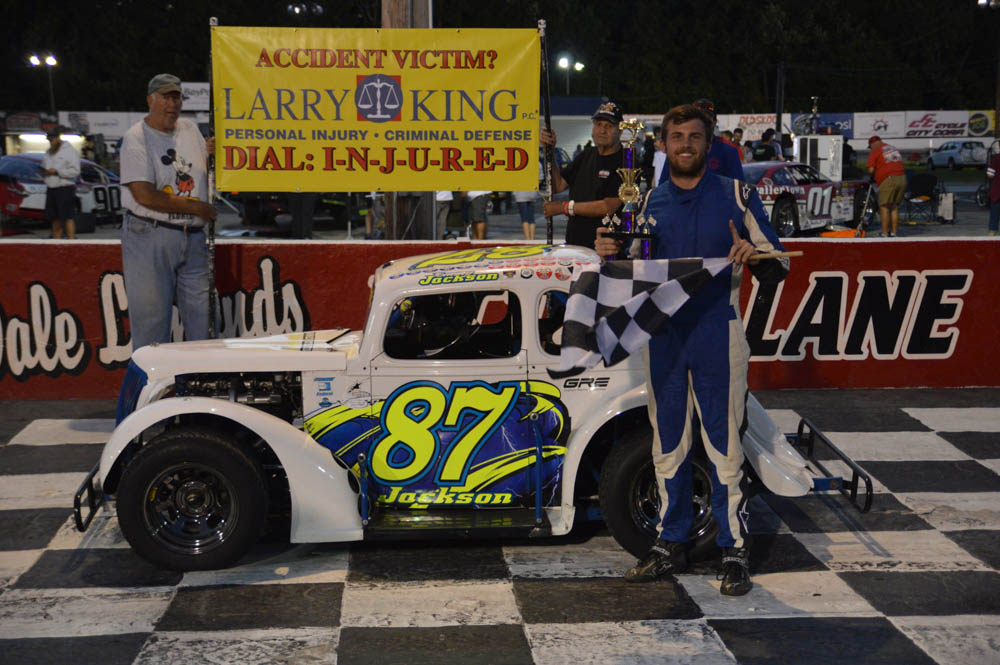 Cycle City Corp Legends 25 Laps: Tommy Jackson Jr picked up another Legends series pole with a lap set at 17.952 seconds. Daniel Silvestri nearly knocked off the pole sitter just twenty eight thousandths of a second to easily claim the two spot on the grid. Spencer Saunders, Ryan Center and Devon Courtney were the five quickest in Legend series qualifying. Green flag was shown to the pole sitter and Tommy Jackson Jr would lead lap one. Spencer Saunders made quick work of outside row one sitter Daniel Silvestri for second but right back to claim the two spot was Silvestri. Several laps later, Tommy Jackson Jr set sail and, on a mission, building a half a straight away lead by the halfway. The field would give chase but on his game was Tommy Jackson Jr going on and picking up the Legend series win. Tommy Jackson Jr from Victory Lane, “It was good, it was better than in practice, we rolled off the trailer pretty good but the weather caught me off guard when it got real cool. We made some good adjustments and we knew that we were on the right track when we qualified but we knew that we could be better and really hit it good for the race. Were gonna try to keep up the good work and keep parking this thing in Victory Lane”. 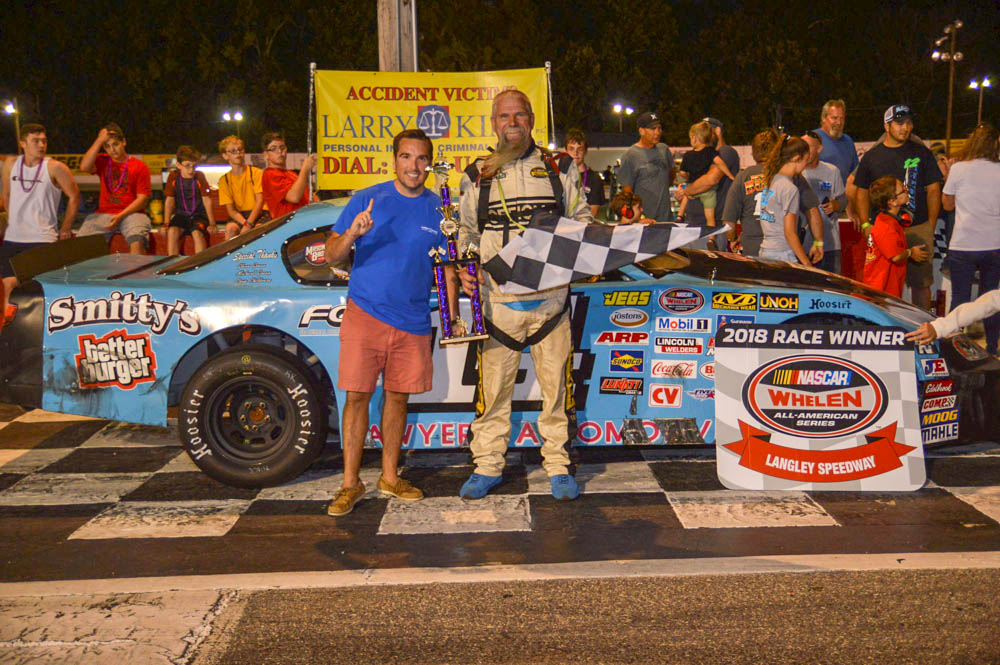 Pepsi Grand Stocks 40 Laps: In Grand Stock division qualifying, Robbie Parker in his first start of the series in 2018 took the race pole. His lap at 17.954 seconds bested Tim Wilson’s lap nearly a full tenth but deserving on his start second on the front row. Green flag waved and the pole sitter Robbie Parker set sail. Setting sail also would be Paul Lubno who first had to do away with Tim Wilson then set his sights on the leader. Lubno would eventually get to Parkers bumper but then the race had its first caution. Ensuing restart saw Parker continue to lead but Lubno this time was struggling to get to the leader just a car length back. With the race at the halfway, Robbie Parker continued to lead with Paul Lubno now closing in an in search of the lead. Laps later, Lubno finally was able to get underneath of the leader eventually taking the spot. But back would the pole sitter come, following the line of Lubno and pressuring the race leader. Final laps saw Parker keep up the pressure but the race leader would deny any charge, Paul Lubno was back in Victory Lane. “Robbie has been away for a while, he’s actually back in his old car, drove one helluva race, drove a clean race and I thank him for that. I retuned the favor and didn’t rough him up, it was good hard racing. These cars will surprise you, were so close in times and it makes for good racing”. 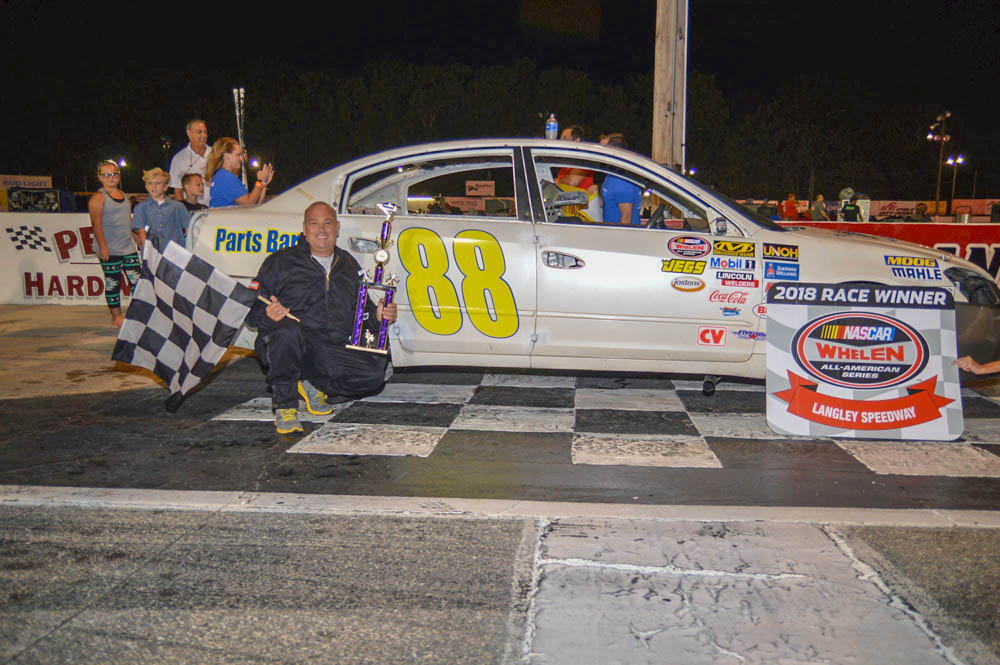 Bojangles Enduros 30 Laps: Enduro action began with a pill draw to determine the starting grid. With twenty cars looking to be the next race winner, Aubry Pavlik pulled the one pill and will start on pole, Christian Keller would start second in a share of row one. Green flag was given to the field and leading lap one would be Christian Keller. Lap two was just as exciting to watch when Mikey Chinn took his turn at the lead. Laps later, the battle for the race lead continued as Charlie Bryant also took a turn at the lead. The action was intense and the lead seemed as if it were never safe when Mike Joyner lead a lap but right back came Bryant to regain the lead in an Enduro thriller. Halfway eventually went on the board when lap traffic created a challenge for the leaders. Mike Joyner who was in second had a tire go down clearing the way of an easy victory for race winner Charlie Bryant. “I had no idea that we would come out here and win a race much less a couple in different divisions. I’m just so thankful, my son had a little prayer in the trailer before we came out and he said lets just give all the glory to God. We just want to thank God for letting us live fully alive, having fun and doing the things we love to do”.