Hampton, VA (May 26, 2018) Local short track racing continued out at Larry King Law’s Langley Speedway which is currently in its 67th season. Featuring eleven different race divisions on its .397 mile long flat banked oval. This week race card featured the ERA Real Estate Professionals Winged Champ Karts, Riverside Paper Pro Six and the Old Skool Video Games Super Streets. Twin race action would come from the Carroll’s Automotive UCar’s along with the Larry King Law’s Modifieds. Coming into this week’s race action, there have been comers and goers in each division. Most teams have seemingly found their grove while many have had difficulties in recent weeks. But after another hard work week in their respective race shops, who will continue to struggle and who will park it in Dale Lemonds Victory Lane? In honor of Memorial Day, all five branches of service would be honored by the top five Modified drivers in qualifying with the highest finishing driver winning the prestigious Commanders Cup. Here’s the recap of the action and who came out on top.

ERA Real Estate Professionals Winged Champ Karts 20 Laps: Aaron Leach nabbed up the race win to start the evening at Larry King Law’s Langley Speedway. In the Winged Champ Kart division, Garry Osborne would start on pole in the sixteen kart grid. Osborne’s lap at 22.674 seconds was nearly two tenths faster than the ride of Aaron Leach but certainly deserving of a share of the front row. Green flag was given to the field and the outside row got it going early as Aaron Leach lead the first lap. Tillman Heuer would follow Aaron Leach to the two spot forcing the pole sitter to get in line for third. Several laps in the feature saw the top four all nose to tail but then became a three car show at the halfway as Aaron Leach continued to show the way. Laps later, both Charlie Ray Lorah, Brandon Lorah teamed up and make their way into the top five, but back up front it was all Aaron Leach who would go on to pick up the Winged Champ Kart win. Aaron leach from Victory Lane, “Can’t thank him enough (Tillman Heuer) for giving me that great push”, claimed the race winner. “I was hoping to get to my brother, glad to see him get a top five. I don’t know, this thing was just rolling and Tillman was doing a great job. I’ll have to repay the favor to him”. 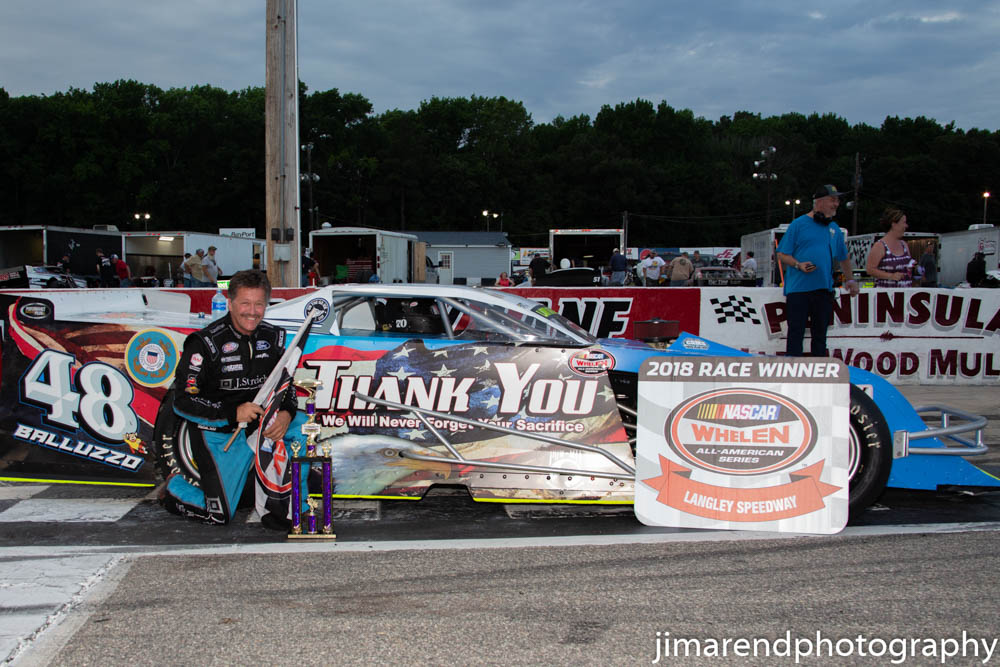 Larry King Law’s Modifieds Twin 30’s: Shawn Balluzzo doubled down again this week in Modified race action. Balluzzo began the afternoon collecting up another pole position run in his quest for a tenth Modified Track Championship. His lap bested thirteen others at 16.315 seconds with Matt Carter on the front row starting second. Bubba Johnston. Bobby Gery and Danny Harrell all had fast laps occupying the third, fourth and fifth spots on the grid. Green flag waved and from the outside in row one, Matt Carter emerged as the leader when lap one went up on the board. After a brief caution, racing ensued as Matt Carter the race leader being chased by Shawn Balluzzo. Early mover in the race saw Andrew Fortin making his way to the front but the bumper beating was found at the front courtesy of Shawn Balluzzo. Laps later and just before the halfway, Shawn Balluzzo finally gets by the race leader Matt Carter. From there, Shawn Balluzzo was able to get through the race traffic, build up a three car length lead and go on to win the first Modified race feature representing the Coast Guard. In winning the feature, Shawn Balluzzo also wins the Commander Cup. Balluzzo from Victory Lane, “The Commander Cup, it’s the most prestigious trophy I love it”, an excited Balluzzo said. “I appreciate all these fans out here on this Memorial Day weekend, we tried to make it something special for them. I like the races to be exciting and Matt Carter is getting really tough and so are these other guys getting hard to pass”.
In the second Modified feature, a mandatory NASCAR invert was ordered giving Brad Adams the race pole with DJ Valente the second starting spot in row one. Race one winner Shawn Balluzzo would give up his eighth place start in the grid to start in the rear in chase of national points. Green flag was on the track and Brad Adams would jump out to the early race lead.  Andrew Fortin, along with Bubba Johnston wasted no time in getting in line to run down the leader. On back, Shawn Balluzzo was putting on a show making his way to fifth just nine laps in from the fourteenth starting position. Back up front, Johnston was within a car length of race leader Brad Adams. With the halfway near, race leader Adams, Johnston and Balluzzo were all nose to tail with Balluzzo clearly the fastest of the three. But as the halfway went up on the board, Balluzzo was shown as the race leader after electing to start last in the grid in chase of national points. After a red flag condition involving some of the leaders, Balluzzo proved to be just too much and would go on to sweep both Modified race features. Shawn Balluzzo from Victory Lane, “I just want to thank everybody, this has been one of those years”, shared the race winner. “My crew has worked their butts off, Big Dave has worked with me since my first late Model win back in 1989. Appreciate the fans out there, thanks for supporting Langley Speedway, come on back next week”. 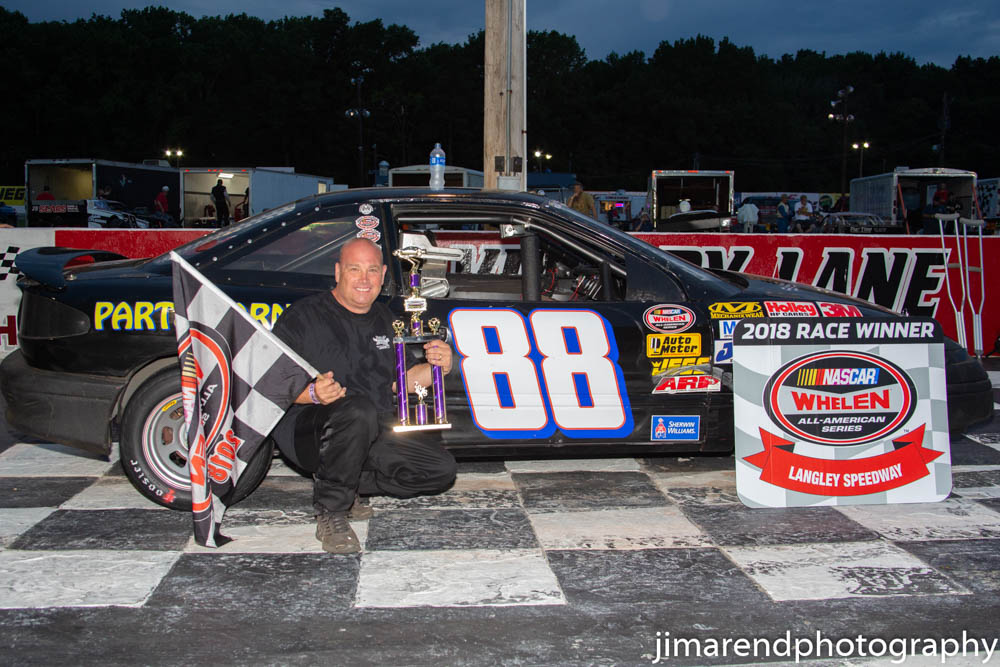 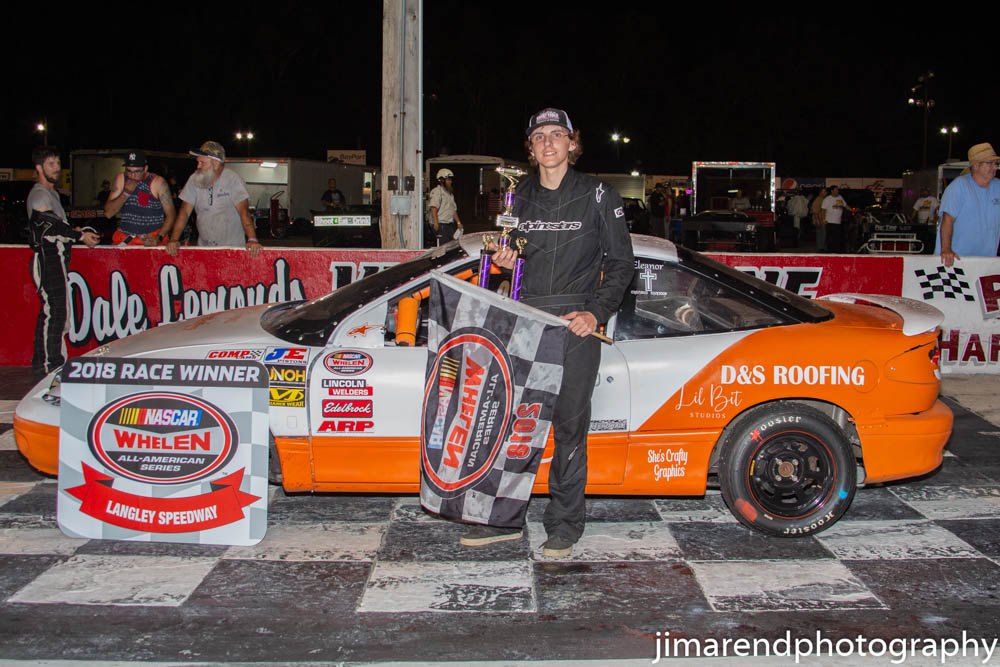 Carroll’s Automotive UCar Twin 20’s: Charlie Bryant Jr and Austin Davis would share Victory Lane in UCar racing action. The afternoon began in UCar series qualifying when Courtney Shifflett put her ride on the pole for the first time on the 2018 season. The fast lap set at 19.144 seconds paced the field with Charlie Bryant Jr earning the two spot shotgun in the field. Austin Davis, Brandon Wood and Tillman Heuer made up the five best in UCar qualifying. Green flag was displayed to the grid and the pole sitter Shifflett did not get going. Charlie Bryant Jr from the outside would motor on to lead lap one with Brandon Wood taking advantage as well. After an early race caution, Brandon Wood would take a turn at the race lead before giving it back to Bryant when the second caution flag waved. Back to the green, Richard Ellis had the strong restart and even taking over the race lead but once again, Charlie Bryant Jr would regain the top spot. Halfway saw Bryant continue to lead as Tommy Gildea would work his way to the three spot. But back up front, it was all Charlie Bryant Jr who would go on to win the first UCar feature. Bryant from Victory Lane, “I just need to thank the Lord for the opportunity for even getting back on the track”, shared the race winner. “I need to thank the Florian’s for giving me the opportunity to drive the car, it’s a really good car, I’m sure anybody could get in here and win with it. I really didn’t think I had the ability to take a good car to Victory Lane anymore, my age is catching up to me but we did it”.
By virtue of the mandatory NASCAR invert, Robbie Morris was on pole for the second UCar race feature when the green flag was waved. But that lead soon vanished when Tillman Heuer took the lead as the first few laps went on the board. Tommy Gildea was the early mover working his way to second from the sixth starting spot. Austin Davis soon joined the fray as the leaders were all nose to tail as the halfway approached. Austin Davis continued to march and eventually took the race lead. On back as Gildea, Heuer, Bryant and Ellis all battled for second through fourth in thrilling fashion. From there, Austin Davis would build up his race lead and go on to win the second UCar race feature. Davis had this to say in Victory Lane, “I didn’t think that I was going to win this year”, said Davis. “Thank my dad, family and everyone who has worked on the car, I’m so blessed to be here right now it’s crazy”. 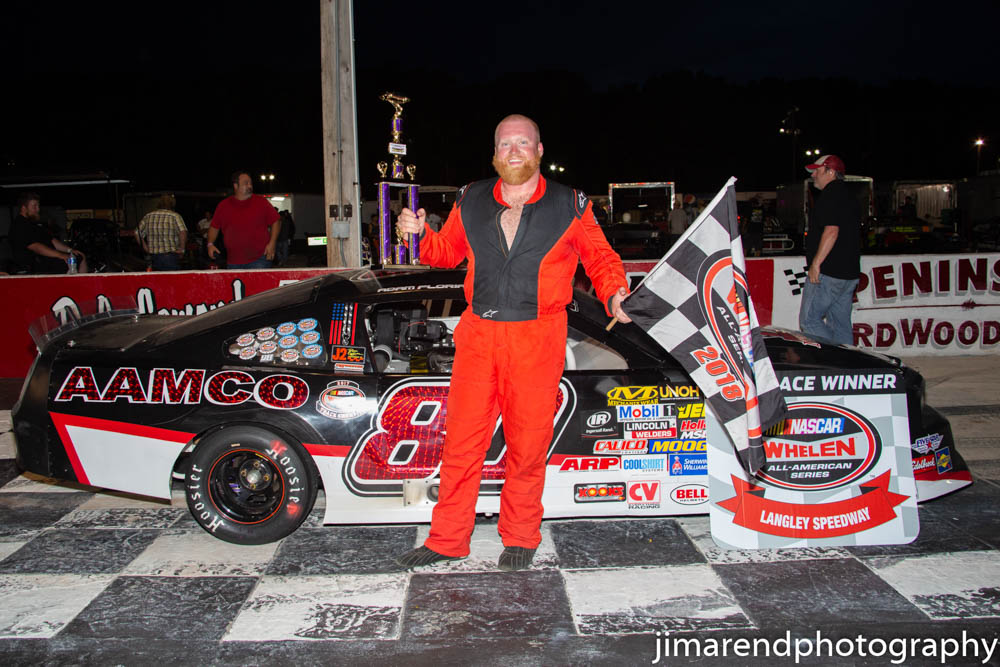 Riverside Paper Products Pro Six’s 30 Laps: Adam Florian continued his winning ways in Pro Six competition. The day started for the race winner in Pro Six qualifying, Travis Wall had the fast lap at 16.896 seconds to pick up his first pole of the 2018 race season. Adam Florian who has had his way in the division thus far would start second. Chris Beasley, Eric Schaffer and JB Sipe were the five best in pro Six qualifying. Green flag would wave and into turn one did the field go. With the lead, the pole sitter Wall, began to build his lead by as much as five lengths in the first few laps. But after a bad start to the race, Adam Florian would regroup and begin his charge in chase of the leader. Just past the halfway, Florian began to take his peeks inside of the race leader. Laps later, Florian would take the race lead but would not get away from Travis Wall just yet as Wall had the leader well within his sights. Latter portions saw JB Sipe holding his own in third but back up front, Florian continues his winning ways holding off Travis Wall for the race win. Florian spoke in Victory Lane, “I can’t thank my dad enough, he puts in so much time and effort into this car”, said Adam Florian. “Jeremy, Franky for coming out and helping me, my brother on the radio as always. Travis Wall, he’s always been a tough competitor, I love racing against him, he drives us harder to keep winning every week”. 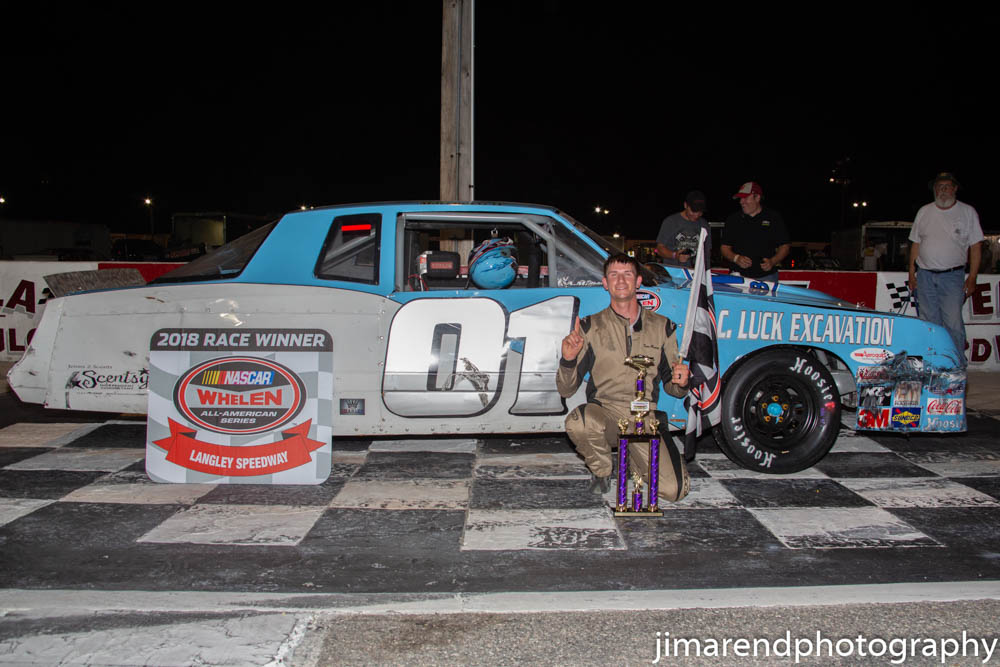 Old Skool Video Games Super Streets 40 Laps: Renno Marchetti picked up the Super Street race win in fine fashion. Marchetti started the day by grabbing up his second pole of the 2018 race in Super Street division qualifying. Posting the pole lap at 18.628 seconds, Dale Parro collected his share of the front row in second. Bill Eaker, Randy Akers and Dale Nichols made up the top five. Green flag racing began with the pole sitter Renno Marchetti securing the point and as the early race leader. Bill Eaker would get the second spot followed by Dale Parro as the early stages of the feature would go full circle. After a brief halt to the event for the races first caution, racing resumed with Marchetti leading but on back, three wide racing would take the spotlight as the beatin and bangin was all on display. Laps later and once the dust cleared, Sean Calway emerged as the big mover in the field, challenging for the second spot. At the halfway, Renno Marchetti continued to show the way but the battle for second was complete when Sean Calway muscled his way by and now in pursuit of the race leader. Calway caught a break in running down the leader as the races second caution was over the speedway setting up an exciting restart. Green flag waved and the race leader Marchetti was having none of it leaving Calway chasing. Chris Roberts was on the move as was Randy Akers in third and fourth as the race entered into the latter portions. After a series of cautions later, Renno Marchetti was not to be denied and would go on to win the Super Street feature. Marchetti from Victory Lane, “Gotta thank Steven’s dog, Woods Body shop, division sponsor Old Skool Video Games. Gotta thank Larry King Laws, RC Luck Excavating, NASCAR, WGH 1310 for sponsoring the night”.