Hampton VA, (5-25-19) Closing out the racing in the month of May means the hot summer temps are well on the way. The racing at this point was also heating up and nothing short of expectations as rivalries renew. The old saying goes that cooler heads prevail, but will it in this week’s edition at Larry King Law’s Langley Speedway? It was the, “97.3 The Eagle, Night at the Races”, hosting five race divisions on the evening. The ERA Real Estate Champ Karts were back in action as well as the Harris Truck Shop Super Trucks. Also taking the .397-mile oval were the Riverside Paper Pro Six’s, Old Skool Video Games Super Streets and the Larry King Law Modifieds. Here’s a recap of the action and how each division fared.

ERA Real Estate Champ Karts 20 Laps: Tim Waltrip collected up the Champ Kart pole in the afternoon time trials clicking off a 23.185 second lap. Jeffrey Johnson earned his spot on the front row staring second as Aaron Leach, Garry Osborne and Chris Bechtel were qualifying’s five best. Green flag waved and the pole sitter showed the eighteen car grid into turn one. Just as the inside line would start to pull away back would come the outside line. Needing four laps to go single file, Tim Waltrip continued to lead followed by Aaron Leach, Danny Millard and Mattisen Morrill all nose to tail. Laps later and at the halfway, Aaron Leach breaks from the draft to try for the pass for the lead but couldn’t make it work. With Waltrip showing the way, Aaron Leach would regroup but then came the races first caution. Back to the green, Leach continued to harass the leader and wearing down Waltrip’s rear bumper. The race would experience one last caution before the feature would settle. Final lap it was Waltrip with Aaron Leach to decide it with Tim Waltrip holding on for the win. Waltrip in Victory Lane, “We got good people out here and they respect everybody. When you go these speeds you gotta respect everybody or it can be a bad situation. Yeah, I knew that they were gonna try something, I was looking in that mirror to see which way they were going to go but I held them off”.

Harris Truck Shop Super Trucks 25 Laps: Rick Poust took the pole in the Super Truck series as his lap topped the field at 19.137 seconds. Shannon Lester complimented row one in his lap starting second as Ronald Klein, Paige Cain and Keith Wheeler were the top five. Green flag was given to the grid and coming around to lead lap one would be the pole sitter Rick Poust. Shannon Lester didn’t get the start he wanted and quickly got behind the leader in second. Making moves in a borrowed truck this week was Chase McAdams who started from the rear. Also, on the move in the early laps was Ryan Huff making his way to third. But back up front it was Rick Poust showing the way. Halfway saw a battle for the lead shaping up as McAdams was catching the leader. Keith Wheeler was able to take back third before the races first caution as Shannon Lester came to a stop in turn three. With the green back in the air, Poust the leader gets the great restart as McAdams quickly gets to the bumper of the leader. Laps later, Chase McAdams gets the bite out of turn two to take the lead but then came the second race caution to set up a green, white, checker finish. Final laps, McAdams would prove to be a tick better by holding off Poust and going on to win the Super Truck series feature. McAdams had this to say, “Yes sir, that was great racing. Can’t thank Jimmy Huff enough for using his truck, this truck would always give us a hard time every weekend and I knew it was a fast truck. Had a little trouble in the tech shed last week with the sixty two, some people doubting some things so I decided to come out here in another truck and see what I can do with it”. 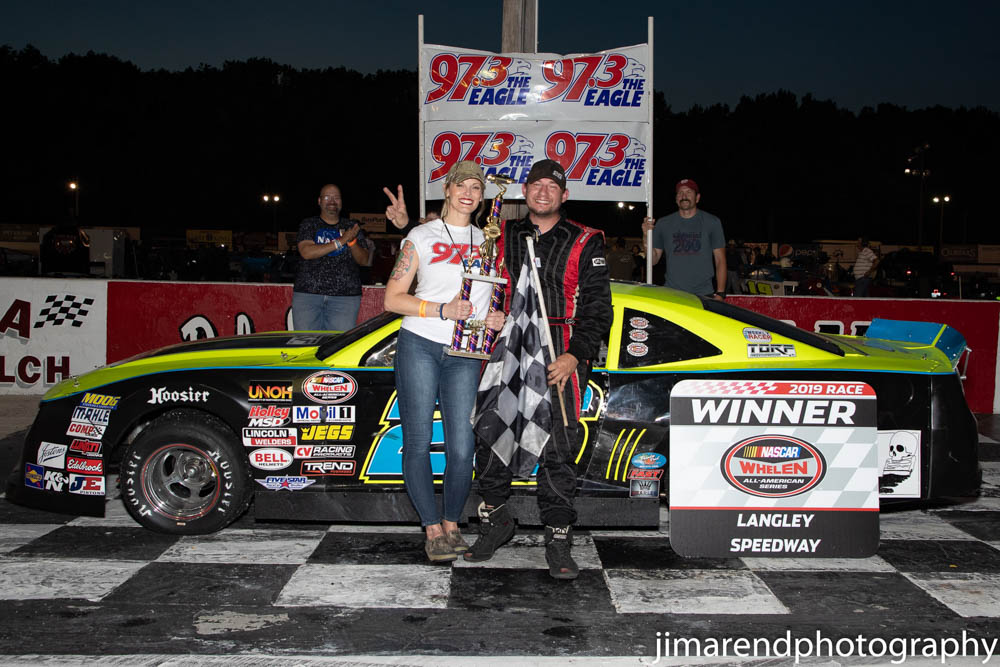 Riverside Paper Pro Six 30 Laps: Jared Clarke would start on the Pro Six series pole by posting a 17.070 second lap. Eric Schaffer would start second in a share of the row as Travis Wall, Bobby Hall and Jason Michaud were fastest in qualifying. Green flag racing was over the speedway and emerging from turn two as the leader would be outside row one starter Eric Schaffer. Bobby Hall would give the pole sitter Jared Clark a go for second but Clarke would hold. Travis Wall picked up a spot to third forcing Hall to fourth in an exciting Pro Six start to the race. After a brief caution, the racing resumed with the excitement continuing when leader Eric Schaffer and Travis Wall make contact. Wall would lead briefly before coming to pit road and assuming command of the feature would be Bobby Hall. Halfway the action continued as pole sitter Jared Clarke would chase down Hall. Lap for lap the lead would shrink but then the races second caution which bunched back up the field as the race would head to the latter stages. Green was back in the air and with the hole shot, Bobby Hall continued to lead. Jared Clarke would try to run down the leader but seemingly wasn’t as good in the final green flag run. Bobby Hall motors on to win in Pro Six competition, Hall had this to say in Victory Lane. “That twenty eight car, the kid has come a long way. I have to hand it to him, I didn’t give him any slack tonight. I cut him off pretty bad a few times, I really appreciate him giving me the room to pass. It’s a total team effort here, I got the easiest job, I just turn the steering wheel”. 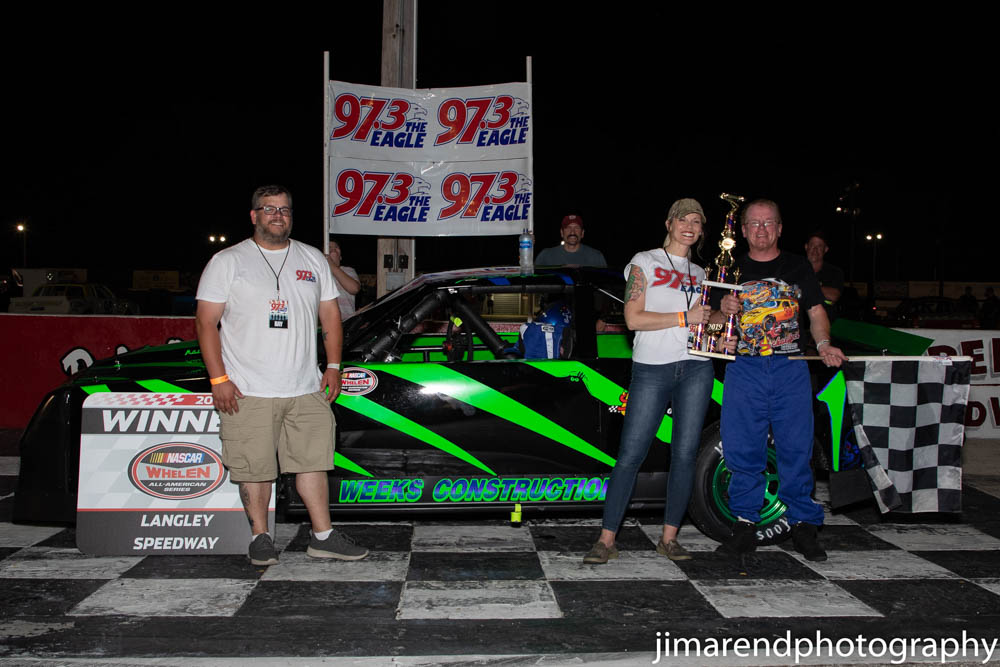 Old Skool Video Games Super Streets 40 Laps: Gordon Weeks put his ride on pole in Super Street qualifying. The lap set the field at 18.773 second with Dale Parro starting second, Chris Spangler, Randy Akers and Bill Eaker in the thirteen car field. Coming around to take the green, the pole sitter spins the tires and when he reaches turn one, he goes on around. The spin negates the start so a new start would be on the way. Assuming the top spot would be Tommy Gildea with Dale Parro to the outside when the green waved again to begin the feature. Leading lap one would be Parro followed by Gildea when they crossed the stripe. Quickly single file, Bill Eaker who was involved in the earlier melee was an early mover as was Randy Akers in the third and fourth spots. With Dale Parro continuing to lead, Randy Akers would reach second when the races first official caution took to the track. Restart to the race saw Bill Eaker with the great jump and held off Parro to become the second race leader. After another stop in the action, the green resumed with Eaker continuing to lead. Parro, Akers, Weeks and Calway the top five at the halfway. Laps later, business at the front picked up when Dale Parro was seeing the leader getting loose off the corners. Not long after did Parro take the top spot and soon began to put some distance from second place Bill Eaker. Final circuits in the race and going unchallenged, Dale Parro wins the Super Street race feature. Parro from Victory Lane, “Yeah, once when we got up to the top, I knew the twenty two couldn’t hold his car down. It’s been a crazy day, changed a fuel pump during practice but other than that, she still got a bit more left in her”. 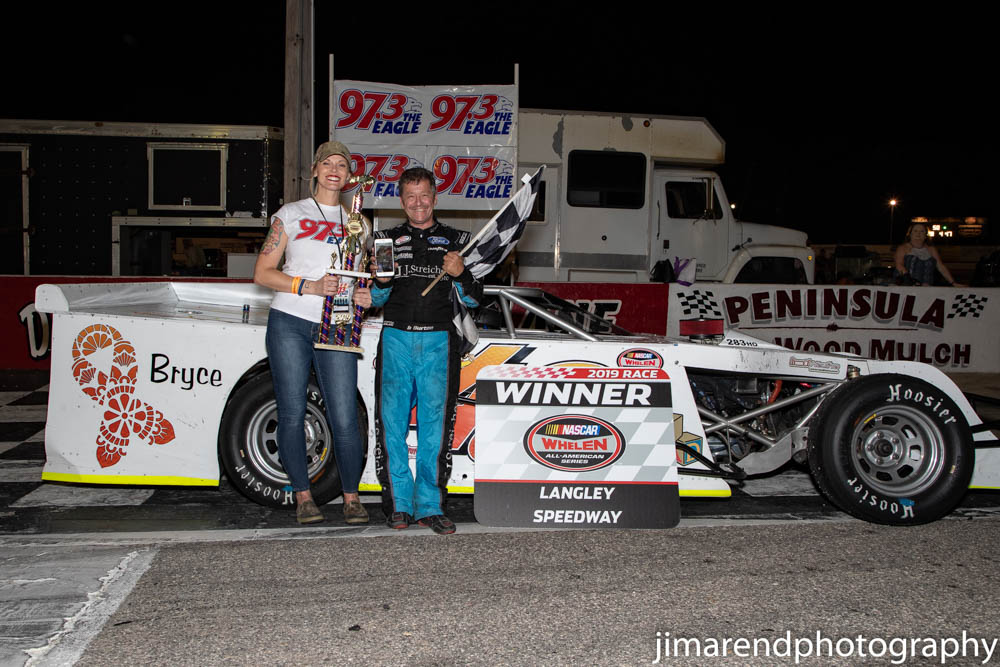 Larry King Law Modified 50 Laps: Shawn Balluzzo was back on pole when the Modified division qualifying concluded. The fast lap was set at 16.351 seconds as Matt Carter got the second starting spot on the grid. Bubba Johnston, Eric McPherson and Brad Adams were the top five in series qualifying. Green flag began the feature as outside row one starter Matt Carter with the great start comes around to lead lap one. Pole sitter Shawn Balluzzo would give the leader a nudge but Carter showed he wanted to lead at this point more. Then a quick caution halted the feature and when racing resumed, Matt Carter continued to lead. With a bit of a wiggle from the leader, the door opened and coming through was the new race leader Shawn Balluzzo. Jamie Sample, Bubba Johnston and Brad Adams would complete the early top five of the event. The second caution flag brought the action to a crawl when TJ Largena and Brad Adams were involved. Setting up for another restart, the green was back over the speedway and Balluzzo would hold off Carter for the lead. Making his way to the front would be Rick Gdovic showing fourth just before the halfway point in the race. But back at the front, Matt Carter would do a good job of staying with the leader and keeping Balluzzo on cue each lap. TJ Largena who had earlier troubles was back in the picture making his way to fourth passing Gdovic for the spot. Late in the feature and just like that, Balluzzo began to put distance between himself and second spot Matt Carter. Needing a caution to make up the ground, Balluzzo hitting his marks goes on to win the Modified race feature. Balluzzo spoke in Victory Lane, “Matt is really tough to deal with, he did a really good job and I knew he would be tough to beat tonight. We talked about starting last for max points but the field was to strong tonight. Bryce, I know your watching baby, this one like all of them are for you”.