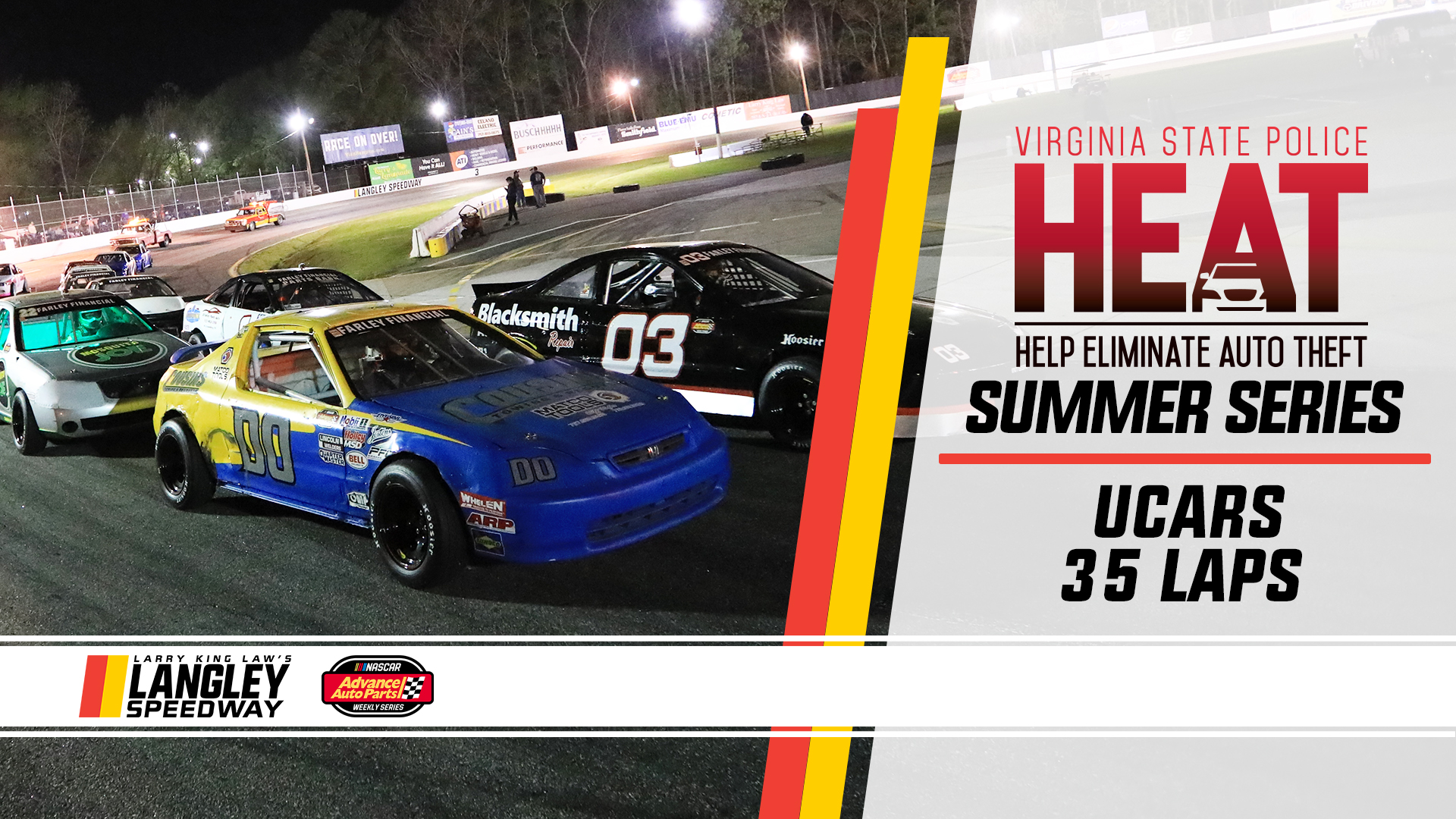 Hampton, VIRGINIA – The Virginia State Police “HEAT” Summer series rolls on this weekend at Larry King Law Langley Speedway. This week the track will turn their attention to the Farley Financial UCAR division and points leader Cristian Keller as he looks to pick up his fifth victory in a row and extend his points lead even further.

That feat won’t come easy, however, as Keller and the rest of the division prepare to make 35-laps around the famed .395-mile facility highlighting Mountain Dew Race Night. Drivers might want to take a couple of swigs of Mountain Dew prior to strapping in as the field, averaging ten cars a race, for that extra boost of energy as drivers look to tackle an extra ten laps. Though that may not sound difficult on paper, these guys and gals will be elbows up fighting for that spot in victory lane and that $100 bonus check.

Keller is one of the drivers who believe the extra ten laps could certainly change both the look and the outcome of the race.

“I feel like it does a lot,” Keller commented. “I think a lot can happen in 10 laps! I’m looking forward to [the longer] race.”

Keller, among a few other drivers, is no stranger to the “longer” races having competed in the popular Parts Barn Enduro series that usually run a 30-lap feature. The biggest difference here is arguably the tire as the UCAR division competes on Hoosier racing tires while the Enduro’s compete on regular street tires. Another factor to take into account is the sustained speeds and fatigue that could plague these drivers as they get into what one might call the “Championship Rounds.”

“I feel like Enduro’s with street tires were only good for 30 laps anyway before starting to come apart,” Keller said. “Being on racing tires, I feel like the car won’t change that much. I think everyone will adjust their cars being it is more laps.”

The Farley Finacial UCARS will highlight a seven-race card along with five other divisions. The Larry King Law Modified’s are set for twin features along with the Pepsi Grand Stocks, Riverside Paper Pro Six, Realtor Ray Karts, and the Parts Barn Enduros. Gates and practice are scheduled to open and get underway at 2:00 PM with qualifying rolling off at 4:30. Pre-race and UCAR driver introductions are scheduled to take place at 6:45 PM on the front stretch with the green flag dropping at 7:00 PM.

Tickets are available both at www.langley-speedway.com and the box office the day of the event. Can’t make it out this weekend? Be sure to tune into Bojangles Qualifying LIVE on Facebook followed by coverage on NBC TrackPass starting at 7:00.