Six race divisions highlighted an exciting evening under the lights at Langley Speedway. Featured divisions included the Cycle City Corps Bando’s along with the debut of the Trip Anderson Realtor Winged Champ Karts. On the race card as well was the Old Skool Video Games Super Streets, Cycle City Corps Legends, B&C Seafood Super Trucks and for twin race features on hand was the Taylor Waste Services Late Models. Many of the race teams that underperformed in their first feature race two weeks ago were eager to get back on the track and here is how the evening races fared. 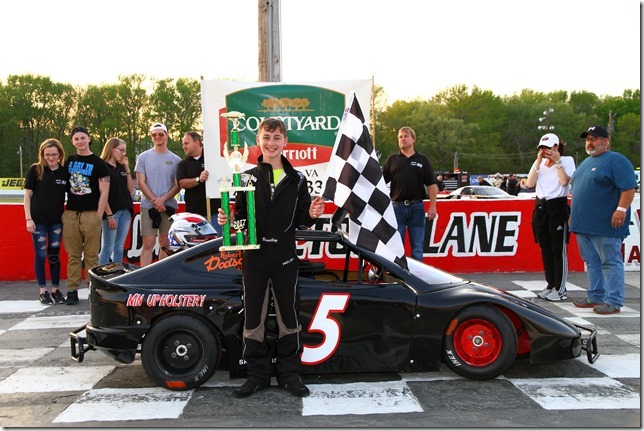 Cycle City Corps Bandeleros 15 Laps: Bradley Kilby paced the afternoon time trails earning the pole with a lap at 21.710 seconds. Josh Speas would share the front row with Kilby when the green flag drop for the fifteen lap event. As the six car field exited turn two, Kilby secured the point with Speas in tow. Josh Speas gave it his all but it was Bradley Kilby with the hot rod on this night going green to checkers for the race win. An emotional Bradley Kilby in Victory Lane, “It felt really good, I just can’t believe this happened. I want to thank my mom, dad and family along with my sponsors”. 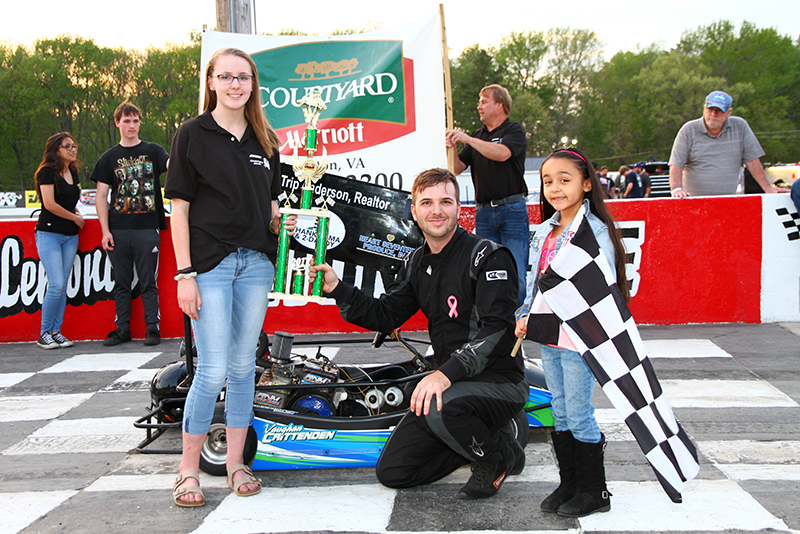 Trip Anderson Realtor Winged Champ Karts 20 laps: Tillman Heuer bested an eighteen kart field during qualifying with a lap at 23.087 seconds to claim the pole for the twenty lap event. Green flag would wave and after a brief caution on the opening lap which lead to a restart. It was Vaughan Crittenden who made the swift moves to get out front and lead the first lap of the race. Several laps later in the run, pole sitter Tillman Heuer was able to work his way back to the leaders bumper. Closing laps saw Heuer trying to get the leader to drive from his rear view mirror but Crittenden would not make the mistake as he would cross the stripe first going flag to flag for the race win. “Yeah, I definitely did a lot of rear view driving. Luckily, someone else spun over in turn two and that’s what brought us the restart and were here (Victory Lane), this is incredible”. 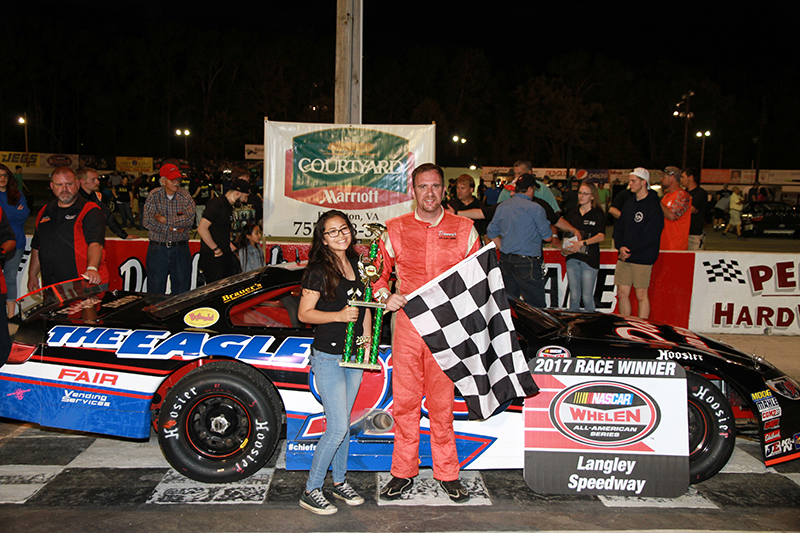 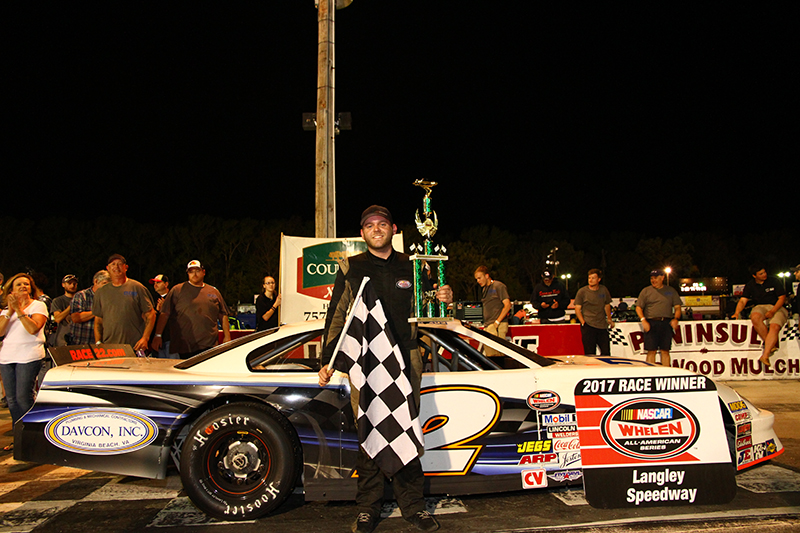 Taylor Waste Services Late Model Twin 66 Laps: Greg Edwards earned the race pole for his lap at 15.950 seconds which was twenty six thousandths quicker then the lap of Matt Waltz. Sixteen Late Models would take the green flag for the first of two race features scheduled on the night. When lap one was completed it was Greg Edwards showing the way. Nick Smith showed he was up to the task pacing the leaders line lap for lap until the halfway point in the race. By then Greg Edwards had built up a twelve car race lead en route to his second race win in the early race season in a caution free race event. Edwards spoke in Victory Lane, “You know, I got out front and I tried to save as much as I could. Knowing we have these twin races, a lot of them decided they may not have the car to win and backed off, save their tires to be in contention for the second race but if were there in front were going to go for it”.

In the nightcap, new 2017 NASCAR rules call for an eight car invert handing the pole for the second sixty six lap feature over to Brenden Queen. Race winner Greg Edwards earlier in the evening would start eight on the grid. Green flag racing soon began with Brenden Queen on point and so did the race’s first caution. Once cleared, the race had its first lead change when Matt Waltz from the outside earned the spot on lap two of the event. From the eight spot came Greg Edwards who by lap twenty had worked his way up to third and on the move. Later portions of the race saw two more caution periods that set the stage for what would be a three lap shootout. The final green flag waved and it was Matt Waltz who had the better restart who then motored on to win the second Late Model feature. Matt Waltz spoke in Victory Lane, “Yeah I had only one option and that was to give it hell as hard as I could and that’s what we did. Those last two laps I hated to see that thing come out basically sailing to the victory. They’re more fun to win that way and it’s a great show for the fans and I’m glad I got to come out on top. Just really appreciate everyone coming out to support us and thank all the fans out here in the stands to support Langley Speedway”. 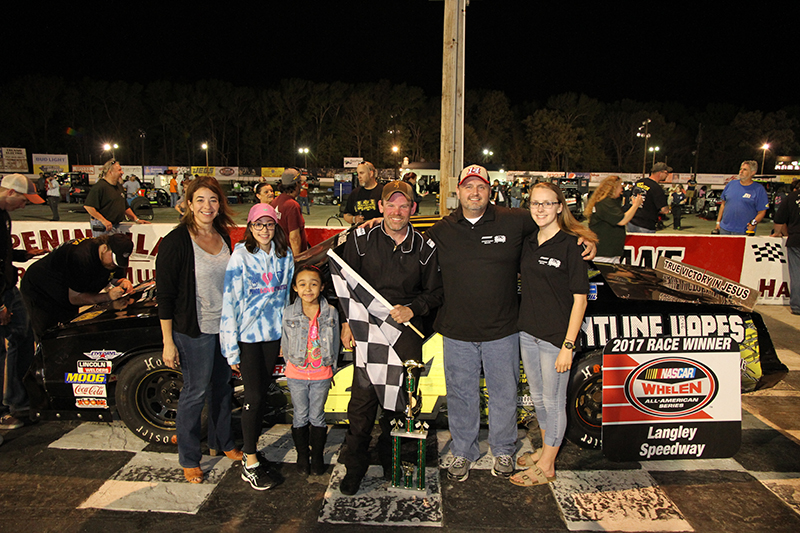 Old Skool Video Games Super Streets 40 Laps: Landon Abbott was the fast qualifier in the division posting a lap at 18.802 seconds to start on the pole. Randy Akers would share the front row with the pole sitter when the green flag waved for the forty lap event. Off to an early lead was the pole sitter Landon Abbott but several laps in, smoke began to show bringing the black flag to the leader and the race’s final caution. Assuming the race lead was Randy Akers when the green flag waved for the final four laps of the event. Sammy Gaita who would start on the outside of the leader for the final four circuits would go side by side battling for the race win. In the final lap and out of the final turn it was Sammy Gaita in a photo finish beating Randy Akers to the line by a mere sixteen thousandths of a second for his first win of the season. “Well I don’t know how we pulled this one off, last time we were out here we blew two motors and this one here is a borrowed one. Fought all day trying to figure out a miss we were having, we got shuffled back and took the cone. Good Lord looked out for us I guess”, explained the race winner Sammy Gaita. 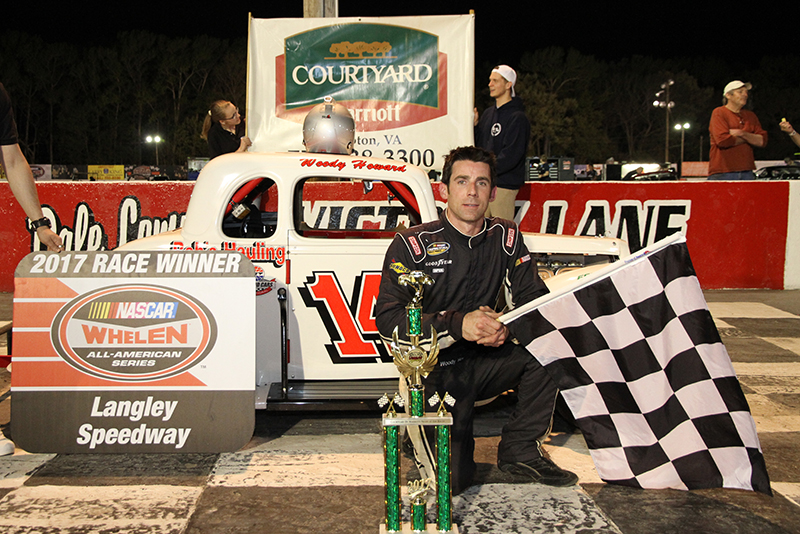 Cycle City Corps Legends 25 Laps: Cody Carlton lead the Legends series in the afternoon qualifying with a lap at 18.051 seconds. Brian May produced a lap that earned him a share of the front row which would feature twenty five laps around the .395 oval. Green flag racing ensued and from the outside, Brian May would lead lap one. But just a few laps later, a new race leader emerged as Woody Howard motored by as six laps were complete. From there, the race was halted by two caution periods before Woody Howard would cross the stripe first securing his second race win in the 2017 Legends race season at Langley Speedway. Woody Howard had this to say in Victory Lane, “I just want to thank Robert Hopper again for allowing me to be out here, you know, everybody that allows me to come out here to have a great time. This is all about having fun and I need to find out what these guys are doing in qualifying. The #94 car was coming, good to see Brian May finish second. I think were still off a little bit, our car handled decent but were still going to have to get faster”. 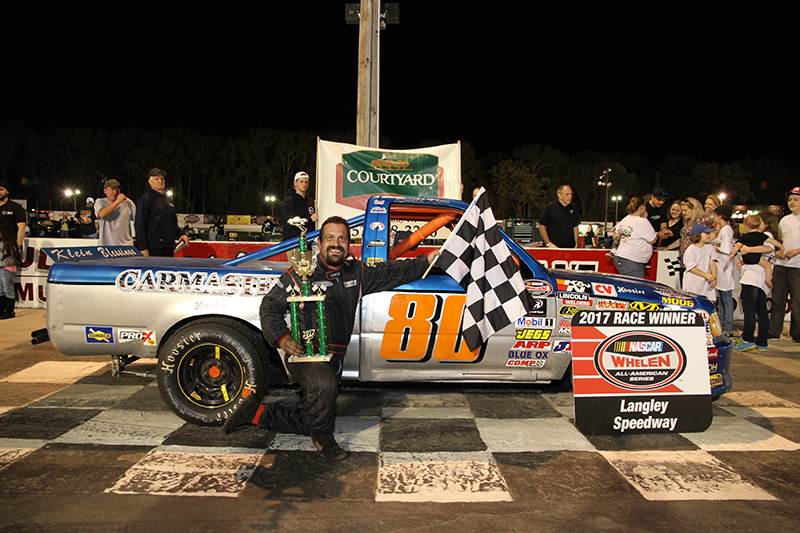 B&C Seafood Super Trucks 25 Laps: Chase McAdams lap of 18.947 seconds was the quickest in the afternoon qualifying in a nine truck field. Richard Ellis would occupy the two spot and a share of the front row. Green flag waved and the pole sitter easily established the race lead by turn three of the first lap. Several green flag laps later, Ronald Klein began his march to the front and closed in on the leader McAdams. With just three laps remaining, McAdams would slip out of turn four and that was all the break Klien would need to get by the leader. Ronald Klien from there motored away to win his first race of the 2017 Super Truck division. Klein had this to say in Victory Lane, “Awe man, at the start I saw Richard go to the outside and I knew that was my only chance to be able to run Chase down. I came closer, an closer, like I got this, I saw him getting tight off of turn two, the spot just opened up and I took it”.