Hampton Heat 200 Presented by the City of Hampton

On an afternoon where heat advisories were already posted by 10am, track temps in excess of one hundred and forty degrees. Thirty one Late Model’s were on hand to participate in this year’s 2017 Hampton Heat 200. The event, hosted by the City of Hampton Virginia, was the second installment of a three race series known as the Virginia Triple Crown. With many of the biggest names in the NWAAS Late Model division, ten thousand dollars was up for grabs with other awards and prizes in the mix. Adding to the excitement was the Cycle City Corp Legends in a National Qualifier race. Cycle City Corp Bandeloros would also return to race action along with the Riverside Paper Pro Six’s and the Pepsi Grand Stocks. No doubt about how hot it was in the air but it was the racing that was hotter down on the track, here’s a recap of the race action. 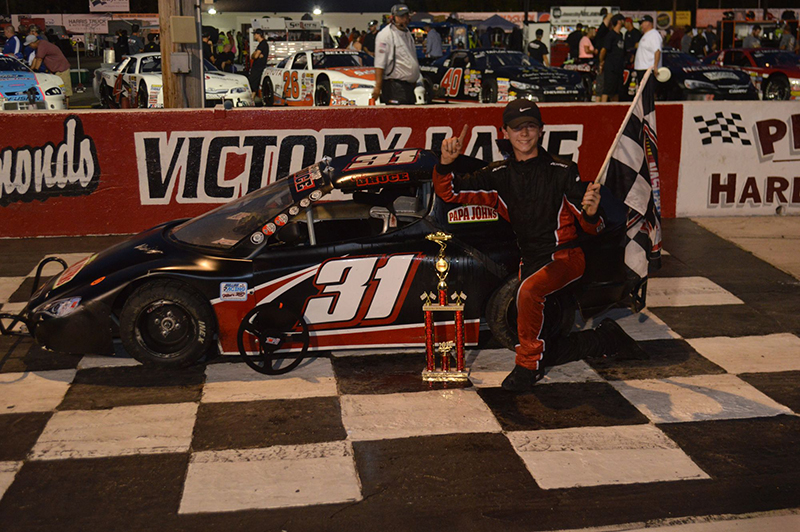 Cycle City Corp Bandeloros 15 Laps: Bradley Kilby lead the afternoon qualifying which was determined by the fastest lap times in final practice. His lap at 22.145 seconds bested an eleven car field when the green flag waved. Bradley Kilby struggled on the start getting going and taking advantage was Autumn Weaver who would lead lap one of the event. After a red flag condition halted the race, Weaver survived the restart charge of Bradley Kilby but couldn’t survive the bump by Kilby several laps later when Autumn weaver went for a spin. Kilby’s lead was short lived when he spun as well handing over the race lead to Cole Bruce. Final laps in the event saw Connor Jones make his move on the leader but it was Cole Bruce crossing the stripe first. Bruce in Victory Lane, “Thank you, I don’t know what happened over in turn one”, said Bruce. “I thought the axel was bent, I thought the front spindle was bent. I think we were a junk car after that wreck over there, of course we worked our way up in qualifying, made some changes. It’s just a great night to get to win”. 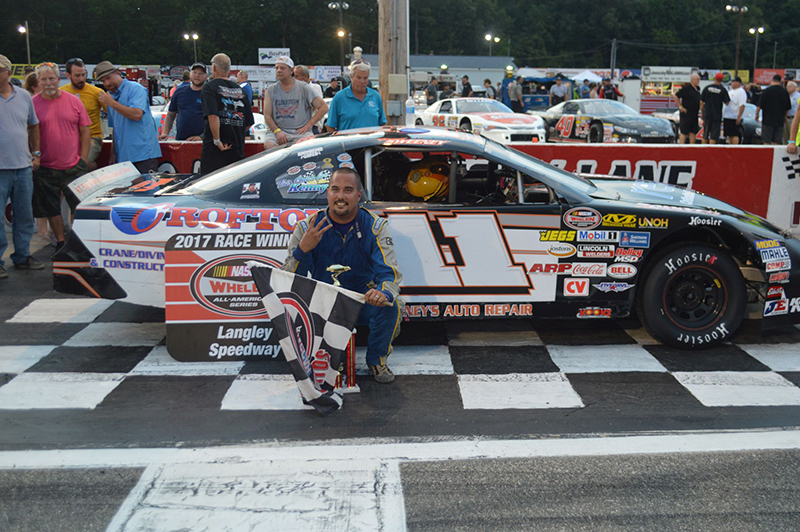 Pepsi Grand Stocks 40 Laps: Tommy Sweeney was on pole in the Grand Stock division posting up a lap set at 18.501 seconds. Earning a share of the front row was Rodney Boyd in his efforts as part of a seven car field. Green flag was displayed and the pole sitter Tommy Sweeney wasted no time securing the point. Paul Lubno was an early mover in the race and even took the race lead just shortly through the halfway. But back would come Sweeney to retake the race lead as Mark Frye was showing muscle racing in second. As for the leader, clean air was the key as Tommy Sweeney would go on to win in the Grand Stock division. Tommy Sweeney in Victory Lane, “We were struggling the first part of the season, like to think we got a grasp on the car now”, claimed Tommy Sweeney. “That was a good race, Lubno got out, I was hoping to hang with him and everything worked out to plan. I’m glad it rained earlier to cool things down because it was really hot today”. 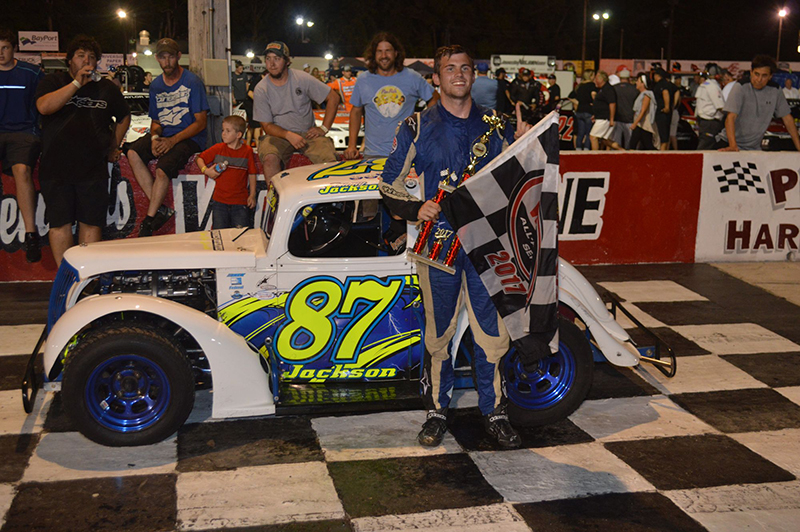 Cycle City Corps Legends 30 Laps: Tommy Jackson Jr would lead a thirteen car field to the green by earning the race pole clicking off a lap at 18.229 seconds. Brian May would start on row one with Jackson as Spencer Saunders, Cody Carlton and Jamie Price as the five best. Green flag was displayed with Tommy Jackson Jr showing the field into turn one. By turn two with the lead in hand, Jackson would try to get away from Spencer Saunders who would mirror the moves of the race leader. After a brief caution, Jackson and Saunders would continue the nose to tail battle for the race lead. Similar battle at this point for third as Brian May and Cody Carlton was battling hard. But back up front, leader Tommy Jackson Jr would have to survive several restarts and keep the charge of Saunders in his rear view as Tommy Jackson Jr wins in the Legends National qualifier. Jackson Jr from Victory Lane, “Awe man, it feels good in this hot weather”, said the race winner. “Yeah, it’s just a lot of hard work, we went through a really bad spell there. We weren’t winning races, mechanical failures that would take us out of it, just gotta thank my crew. Worked some really long nights in the shop to get us here, thank Spencer, we lead all thirty laps and he was right there with us”. 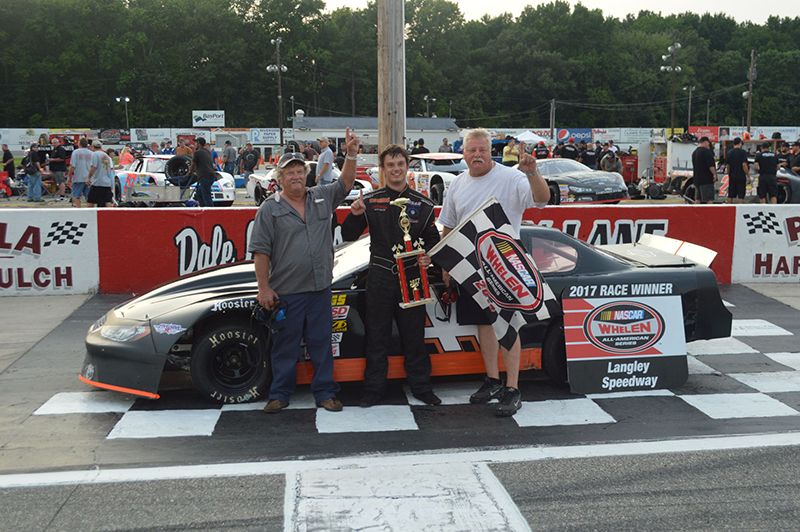 Riverside Paper Pro Six 30 Laps: Travis Wall picked up the race pole by his fast lap at 17.747 seconds around the .395 oval at Larry King Law’s Langley Speedway. Adam Florian was just twenty nine thousandths of the pole speed but deserving a share of the front row. Race action began as Travis Wall would show the field to the green and out of turn two would the race lead become secure. Adam Florian, Bobby Hall and JB Sipe would pace the leaders line in single file order for much in the early goings. But back up front, Travis Wall would continue his charge as the leader and kept the efforts of Adam Florian at bay as Travis Wall would win in Pro Six race action. Travis Wall in Victory Lane, “Yeah, it’s what we get for having a month and a half off”, explained the race winner. “We went and did our homework, actually went to Florida for a vacation too on top of that. Man, we did a whole lot of work here in the month of June and July, it feels good to get back (Victory Lane)”. 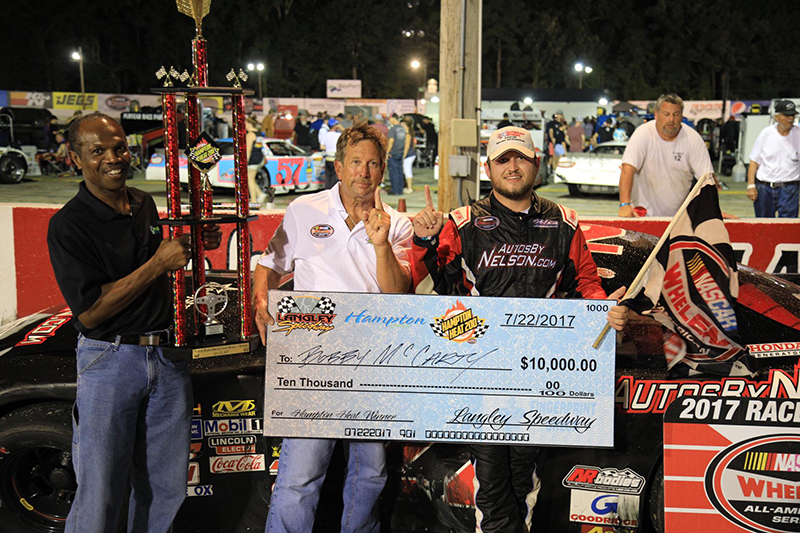 Taylor Waste Services Late Models 200 Laps: Three time Hampton Heat winner CE Falk took the afternoon pole award with a lap set at 16.007 seconds. Phillip Morris was just a mere, nine thousandths of a second off Falk’s pole run. Nick Smith, Timothy Peters and Matt Waltz were the five quickest in the thirty one car field. Green flag would wave and Larry King Law’s Langley Speedway would come alive. Pole sitter CE Falk showed the thirty one car field to the green as the beatin and banging began at the front. Falk and Phillip Morris would battle but Falk secured the race lead in the early goings. Not long before the torrid race pace would encounter lap traffic with Falk showing the way. Early movers were Peyton Sellers and Mark Wertz but with several laps in, leaders were negotiating lap traffic, everybody else were just riding. Quarter through the race, Falk still was the race leader with Morris haunting Falk’s every move. The race experienced its first caution when Macy Causey hit the inside wall on lap sixty six which ended her night. Back to the green, Falk maintained the race lead and began to put some distance from Morris who was then being challenged by Nick Smith in third. Nearing the halfway, Connor Hall would work his way to the four spot passing Timothy Peters and Peyton Sellers as Falk continued his race lead. Halfway was reached bringing out the caution where the field would come to pit road and be given fifteen minutes to make adjustments only. Green flag racing would return to the track and CE Falk continued his race lead. Building up a three car length lead over second place car of Morris, Peyton Sellers at this point was looking for a way around to take second. Soon after in the feature, Morris hopes for a Hampton Heat win started going backwards as Nick Smith, Mark Wertz and Bobby McCarty were all marching towards the front. Getting into the latter portions of the race, the event was slowed by several cautions as CE Falk and Nick Smith were the class of the field. But then the leaders battled which McCarty took advantage of and would become the new race leader with just a handful laps remained. But once in clean air, McCarty never looked back and would go on to win the 2017 Hampton Heat 200. McCarty in Victory Lane, “We had a great car man, these guys right here, I love them to death”, a delighted McCarty said. “They work so hard, and push me, and give me everything I need to come out here to do what I’m doing. I love them to death, I can’t thank them enough. They were racing really hard (Falk and Smith), ya know, these races always have those late race cautions. But the #40 and the #12 slipped up and I took my opportunity. I just love these guys so much and I just owe all my success to them”.