The afternoon rain showers shortened up practice but fortunately didn’t stop the evenings racing as five exciting race divisions would take to the track. Twin races were on the card for the Larry King Law Modified’s and the Old Skool Video Games Super Streets. Also in other exciting race action were the Trip Anderson Realtor Winged Champ Karts, Harris Truck Shop Super Trucks and the Carroll’s Automotive UCAR’s. As the second half of the race season is in full swing, points battles are heating up, rivalries have spawned and its go time here at Larry King Law’s Langley Speedway. Here’s a recap of the nights highly anticipated race action. 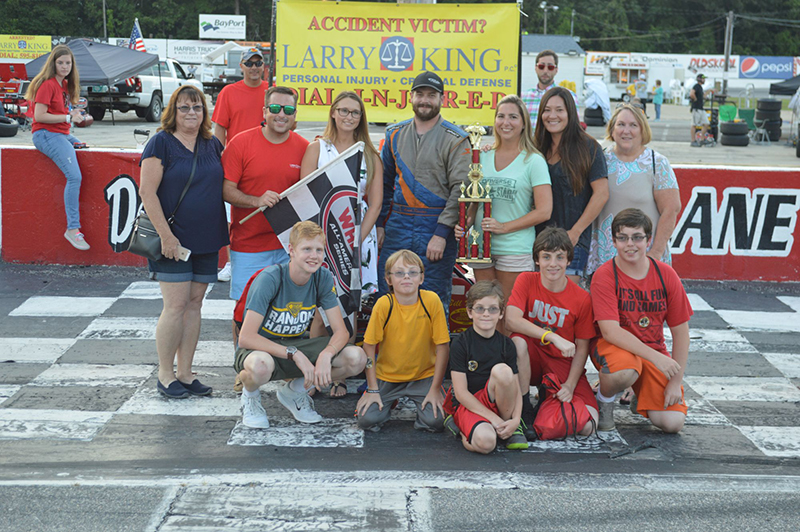 Trip Anderson Realtor Winged Champ Karts 20 Laps: Aaron Leach was the afternoons top qualifier in the Winged Champ Kart division. His lap at 23.092 seconds was his second pole on the year with Garry Osbourne starting second on the front row. Green flag racing began and not long would the pole sitter along with Brandon Lorah set sail as the two car tandem took off. Shortly after the two had built up a full corner lead, lots of three wide racing on back made it possible for the two go unchallenged. With just a few laps remaining, Lorah tried to get the leader Aaron Leach to make a mistake but none was doing as Aaron Leach leads the last lap for the win. Aaron Leach in Victory Lane, “Yeah, in the draft it too is a great equalizer because you’re only as fast as the car pushing you”, stated the race winner. “Can’t thank Brandon Lorah enough, I know the white flag anything goes, I protected the bottom and I gotta thank him for driving me clean”. 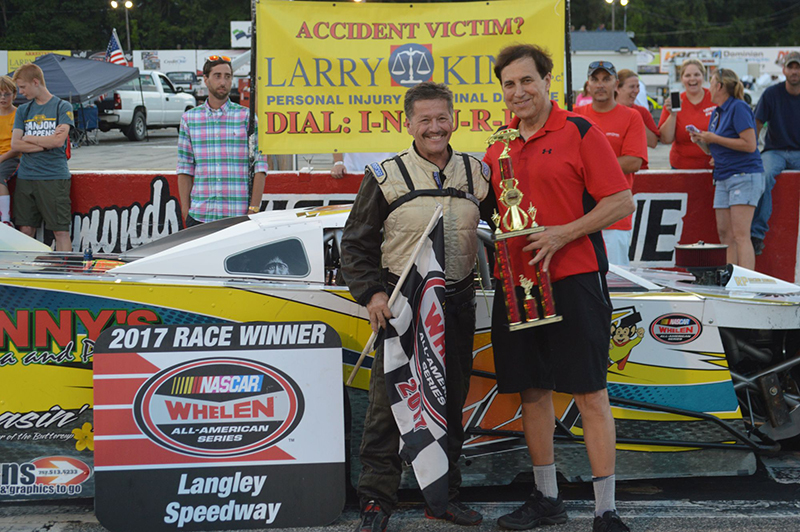 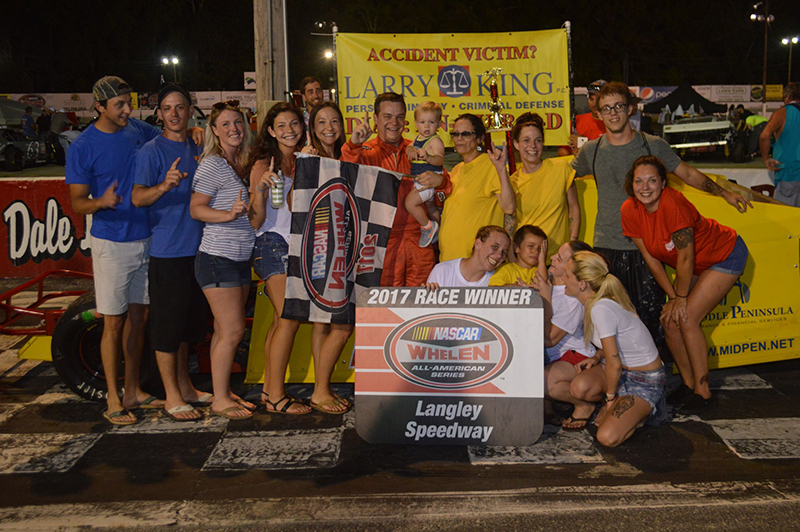 Larry King Law Modified’s Twin 33 Laps: Shawn Balluzzo sat on pole for the first time this season in Modified qualifying. Posting a lap at 16.888 seconds easily bested the lap of Bubba Johnston but deserving of a share of the front row. Matt Carter, Matt Slye and Danny Harrell were qualifying’s best. Shawn Balluzzo would show the field to the green and quickly established a race pace that Matt Carter starting third could not match. Soon after, Carter started to fall behind as Bubba Johnston, Matt Slye and Danny Harrell was moving up through the field. Laps later and with just four laps to go, Slye and Johnston would bring out the late race caution. Back to the green, Slye would try the race leader on the outside but leader Shawn Balluzzo held on and cruised to victory. Balluzzo had this to say in Victory Lane, “It’s great here, I betcha its looks like a thousand horsepower (talking about the engine)”, says Balluzzo. It’s all about keeping it straight and I got two really big thank you’s. Want to thank Phillip Morris for racing last week, I watched what he did and I changed my line tonight. I want to thank all these fans for being out here with this weather, not knowing if we’re going to race and this heat. So, I really appreciate everyone coming out to watch the racing.

In the Modified nightcap, Bubba Johnston would start on pole based on the mandatory invert as the green flag waved to the field. After a brief battle with Donnie Holston for the lead, Johnston began to get into his rhythm and quickly had a four car length lead. But then troubles for the race leader as he starts to slow and taking the race lead was Matt Carter. At the halfway, the race lead was challenged when Matt Slye finally was able to take the lead from Carter but the eyes were also on Balluzzo who elected to start dead last seeking max National points. Final laps saw Balluzzo get by Carter for second and quickly collapsed the race lead by Slye. But lap traffic would make a difference in getting to the bumper as Matt Slye used the traffic to his advantage to go on and win the race. Matt Slye from Victory Lane, “Haven’t had a chance to run here much, my little boy is here, he’s been in Victory Lane when my wife was pregnant but he’s never been since he was born”, said an emotional Matt Slye. “We haven’t had much time to race because of family and everything else so, I’m just really proud of this team. We’ve only raced twice and to finish second and first and to beat a guy like Shawn Balluzzo who is tough to beat at a place like this is awesome”. 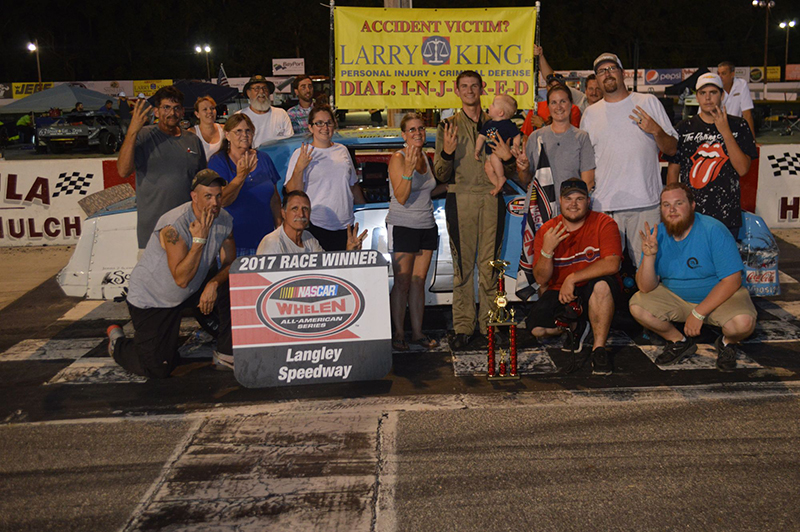 Old Skool Video Games Twin 33 Laps: Renno Marchetti IV continued his qualifying dominance by sitting his hot rod on the pole for the fourth time this year. His lap at 18.863 seconds topped the lap by Sammy Gaita who would start second on the twelve car grid. Green flag waved and Marchetti would lead the field into turn one. Marchetti’s lead was secured by turn two but second was yet to be decided when Sammy Gaita and Randy Akers battled but soon after, Gaita would prevail. As for the leader, Marchetti would get into his grove and easily created a six car length lead in the early portions of the race. The race experienced it first caution and on the ensuing restart, teammate to Marchetti, Landon Abbott would take the cone to the outside of the race leader. The green flag would wave and from the outside, new leader would be Landon Abbott but quickly Marchetti would come right back to regain the lead. From there, Renno Marchetti IV mounted up a near backstretch lead in route to his third win on the year. Marchetti in Victory Lane, “In the short run, I didn’t have a whole lot especially for my teammate”, expressed Marchetti. “I gotta thank him for running me clean but we would get a few laps under green this thing really starts to work. I gotta thank all the fans for coming out in this heat, I know it’s hot, I know you all like good hard racing. We do our best to put on a good show so thank you for coming out”.

In the Super Street second race feature, Sean Calway would get to show the field to the green based on the mandatory invert. Green flag waved and it was Calway with the early race lead before a brief caution slowed the race pace. The caution proved to be big for Landon Abbott and race one winner Renno Marchetti as they got to start second and forth by virtue of the cone restart. But troubles for Abbott on the restart as he gets spun by the leader for yet another race caution. On the ensuing restart, Bill Eaker became the race leader who soon would deal with the charge of Renno Marchetti for the race lead. After another stop in the race action, Marchetti was able to beat Eaker on the restart to take command of the lead. From there, it was the break Marchetti needed after starting last on the grid seeking max points to go on for the race win. Marchetti back in Victory Lane, “It was a heck of race, gotta thank everyone for running me clean”, said the race winner. “Ran a lot of laps with randy, Bill and the other guys. Appreciate the clean running, gotta thank Larry King Law’s Langley Speedway once again, thank you for supporting the track, Thanks to everybody for coming out, I know it was a late night”. 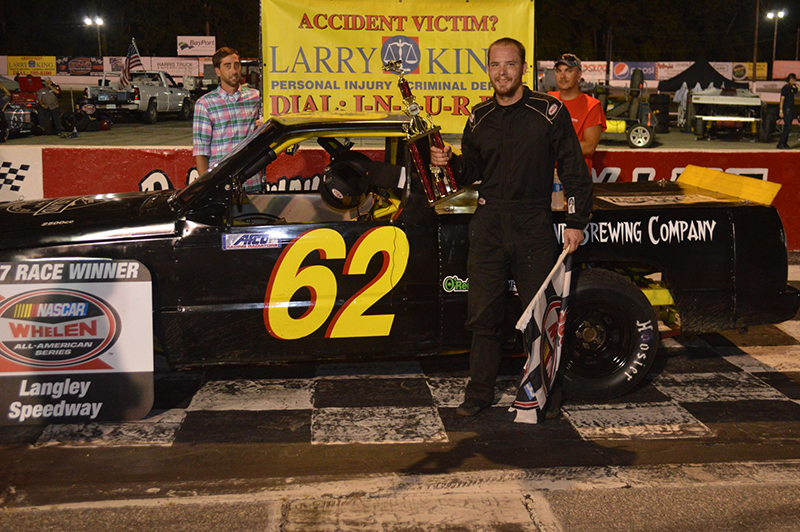 Harris Truck Shops Super Trucks 25 Laps: Chase McAdams continued to shine bright in Super truck qualifying. His pole run which was his fourth on the season was set at 19.307 seconds just ahead of Dustin Mullins run who would start second on the grid. Green flag was waved to the field as McAdams would drive his rocket into turn one. Once McAdams secured the point, trouble for the second place starter Dustin Mullins whose night came to an end. Back up front, McAdams would enjoy a sizeable lead as Ronald Klein soon set his sights on the leader. But then trouble came as the red flag would be displayed to the field when Elysia Potter would get into the wall ending up on her side when she came to a stop. Potter would climb from her ride and was reported to be fine. Back to the green in the event, McAdams would not waste time getting away from Ronald Klein and Jacob Carr. Halfway in the race, leader McAdams had built back up a half a straight away lead and would go unchallenged to the checkered flag for the win. McAdams in Victory Lane, “I’m just glad Elysia is alright, just couldn’t believe seeing that truck upside down. Yeah, were definitely coming from behind this year. Were gonna see what we got, this thing has been on a rail, it’s an old motor and were hoping it all holds together”.
Race Results:
1. #62 Chase McAdams; 25
2. #88 Jacob Carr; 25
3. #80 Ronald Klein; 25
4. #31 Richard Quinn; 25
5. #3h Ryan Huff; 25
6. #24 Elysia Potter; 11
7. #19 Dustin Mullins; 1 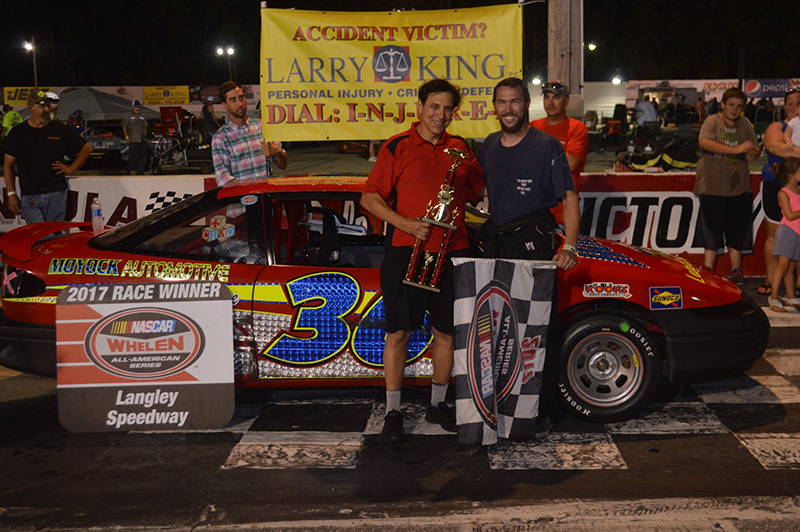 Carroll’s Automotive UCAR’s 25 Laps: Eric Schaffer would start on the pole in the UCAR race division posting his fast lap at 19.529 seconds. The lap was better then shotgun starter in the field Tommy Gildea who was showing good speed throughout the day. Green flag racing began with pole sitter Eric Schaffer with the early lead. Then it was Tommy Gildea taking a turn as the leader but soon after and starting from the rear of the field. Division dominate Michael Waters who had a disastrous qualifying effort made his way through the field and would take the race lead just short of the halfway. From there, Gildea would chase down the leader but just couldn’t collapsed the lead as Waters would go on to win. “Yeah, last week we pulled a couple spark plug wires off and broke a couple, thought we had them fixed”, explained Waters. “Motor didn’t want to run, didn’t get a good qualifying lap, so we went back there and worked on it and got it right. I’m just glad to be back here in Victory Lane”. The win was Michael Waters seventh straight.