As the summer heat continues so does the exciting racing here at Larry King Law’s Langley Speedway. This week, the highly anticipated race event which is just two weeks away called the, “Hampton Heat 200”, saw some of Late Model’s best participate. Highlighting the evening was the twenty one car field of the Taylor Waste Services Late Model’s with race action from the Pepsi Grand Stocks. Also providing thrills were the Bojangles Enduro’s, Casey Cycle City Legends and Bandeloros. Expecting an intense evening of competitive, thrilling local short track racing, here’s the recap of the evening’s events. 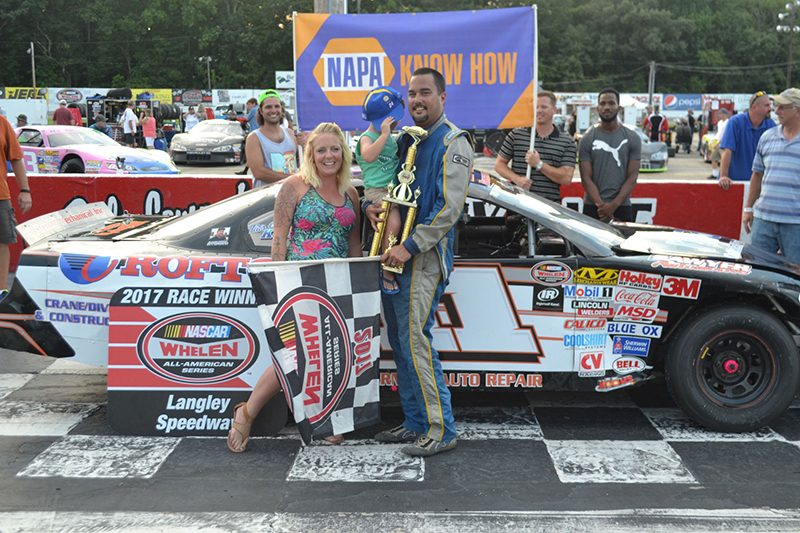 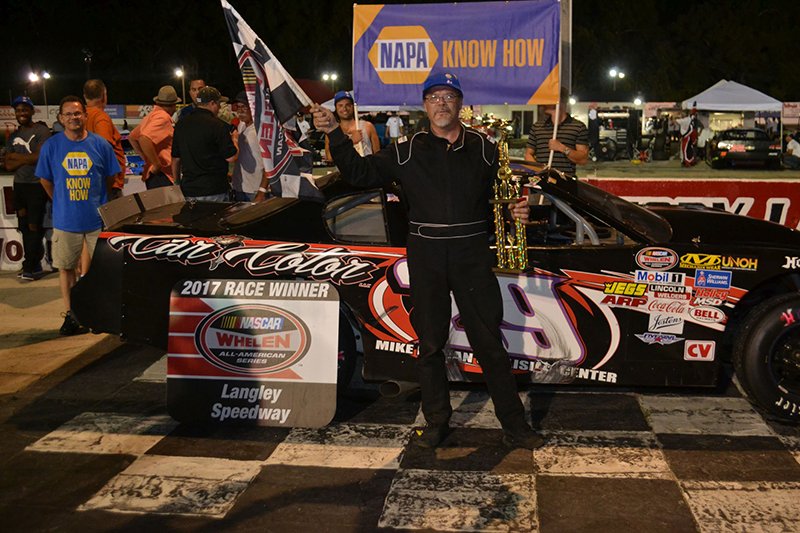 Pepsi Grand Stocks Twin 33 Laps: Mark Frye picked up yet another pole run in the afternoon qualifying showing a fast lap set at 18.165 seconds. Rodney Boyd who otherwise has been the talk of the division earned a share of the front row. Green flag racing began with the pole sitter leading the race field into turn one. In the early stages, the race saw Mark Frye open up a four car length lead but after losing the second place spot to Tommy Sweeney, Rodney Boyd would retake second and began his charge on the leader. Halfway point saw Boyd within a car length of the leader Mark Frye but the best battle was for third as Paul Lubno, Tim Wilson beat and banged. After a brief caution, Frye would continue his race lead holding off the restart and the late race assault from Tommy Sweeney by virtue of the cone restart. But on the last lap the two would make contact sending the leader around setting up a green, white checker finish. Restart began with Sweeney as the leader but Boyd was able to get by but the battle wasn’t over as contact saw Boyd spinning and Sweeney crossing the stripe first. Sweeney in Victory Lane, “First off, what happen with Frye, that was an accident. Rodney tried to use me up but I wouldn’t let him but if that’s what he wants to do then that’s what we’re going to do”. In the night cap Grand Stock race feature, Kevin Morgan would get the race pole based on the mandatory invert with race winner tommy Sweeney starting eighth. Green was on the track and the early race leader Kevin Morgan would lead a few before Mark Frye took over the command of the race. Battle for the race lead was soon after when Tommy Sweeney made his way to the leaders bumper but the leader went up a grove to hold off Sweeney to retain his race lead. From there, it was Mark Frye who would go on and pick up the race win. Mark Frye in Victory Lane, “Yeah, we’ve been fighting a loose car all year”, claimed Mark Frye. “Been trying to get it tightened up, were a lot closer now, it’s still loose, the track doesn’t have a lot of traction in it. But it’s finally good to get one”. 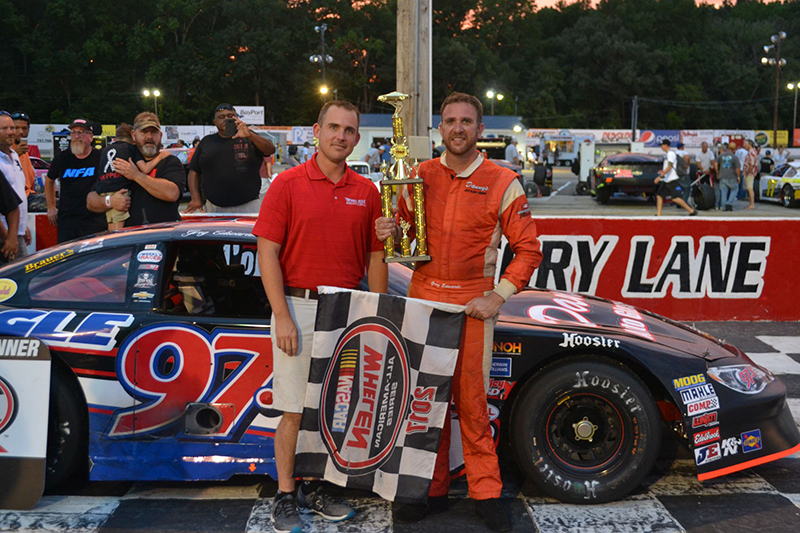 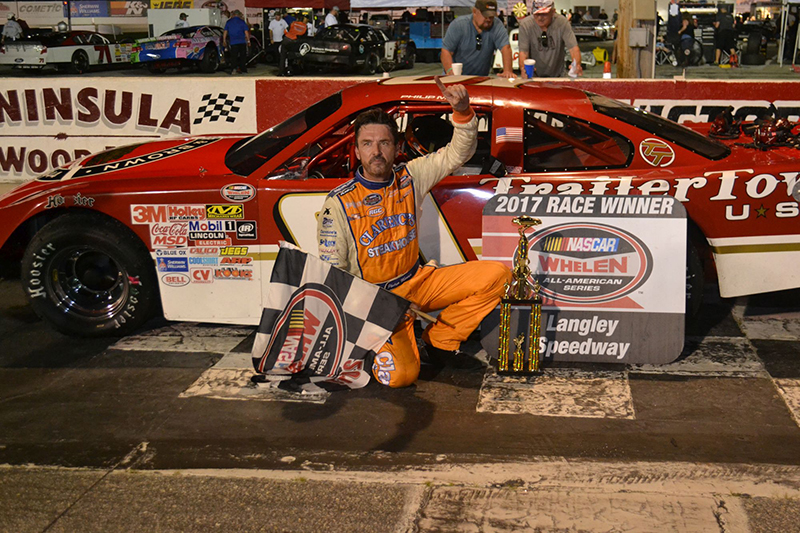 Taylor Waste Services Late Model Twin 66 Laps: In Late Model qualifying, Matt Waltz collected up his second pole on the season with a lap at 16.113 seconds. Greg Edwards was just a bit off but still worthy to start shotgun in row one as CE Falk, Nick Smith and Brenden Queen were the five best in Late Model qualifying. The green flag was in the air as pole sitter Matt Waltz showed the twenty one car field into turn one. While Waltz secured the point, Falk was able to get by Greg Edwards for second and with sights on the race leader. Several laps in and a new race leader as CE Falk would spend time on point with Matt Waltz, Greg Edwards and Nick Smith all nose to tail. After a quick debris caution, the halfway leader CE Falk enjoyed a three car length lead before entering the latter portions of the race where Greg Edwards was there. After a bumper to bumper battle, contact saw Falk going up the hill and Greg Edwards becoming the new race leader. From there, it was all Greg Edwards going on to win the evenings first race feature. Greg Edwards in Victory lane, “It was very hot there, CE had a really good early run car and he pushed Matt real hard”, explained the race winner. “I just let them do they’re deal, they started sliding around, it started to slowly come to me. CE must be a little upset, but I was clearly underneath of him down the straightway and he eased down and I held my line”.
In the second Late Model feature, race one winner Greg Edwards would start eighth on the grid from the mandatory NASCAR invert. As a result, Brenden Queen would start on pole and show the twenty car field to the green to start the race. Racing began with Queen leading into turn one but Phillip Morris who started second would lead lap one. Several laps into the race feature saw the race leader Phillip Morris stretching out a lead near an entire front stretch. CE Falk would go uncontested in second as the halfway neared with Greg Edwards who started eighth showed third. Soon after, Edwards would get second from Falk but back up front in a caution free race event was Phillip Morris who cruised to the stripe for the race win. Morris in Victory Lane, “Yeah, gotta lot of people to thank, namely HC Sellers, Billy Banks for the motor”, said the race winner. “Car was awesome there, it was really good in the first half but Forrest figured out a way to make it better and that’s why you see this car in Victory Lane every week because it’s got more front grip then anybody. All I gotta do is hang on to it if I can but this place has always gotten away from me. Just want to thank Peyton Sellers for being a great sportsman and letting me borrow his engine”. 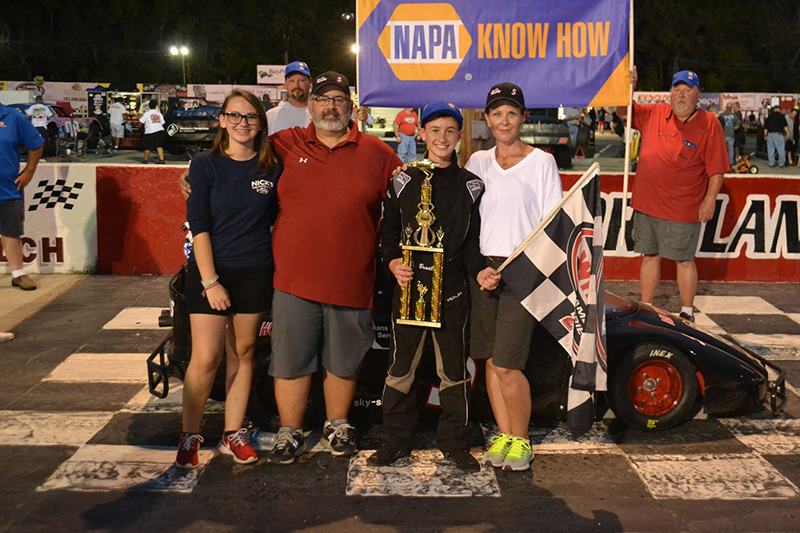 Cycle City Corp Bandelors 15 Laps: Bradley Kilby notched up his fourth pole on the season by clipping off a 21.809 second lap in qualifying. Autumn Weaver continued to impress in the division looking to capitalize off her race win just a few weeks ago would start second. Jacob Putman, Cole Bruce and Wesley Newell rounded out the five best in qualifying. Green flag waved with Bradley Kilby showing the way into turn one and emerging out of turn two securing the point. Autumn Weaver would give chase before going around for the races first caution. Back to the green, Kilby would show the way before being run down by Cole Bruce. Nose to tail were the leaders but Kilby would hold off the run of Cole Bruce going flag to flag for the race win. Bradley Kilby had this to say in Victory Lane, “Thank you, yeah, when Autumn left, I didn’t think I would get back up to the front, thank you”, an exhausted Bradley Kilby shared. 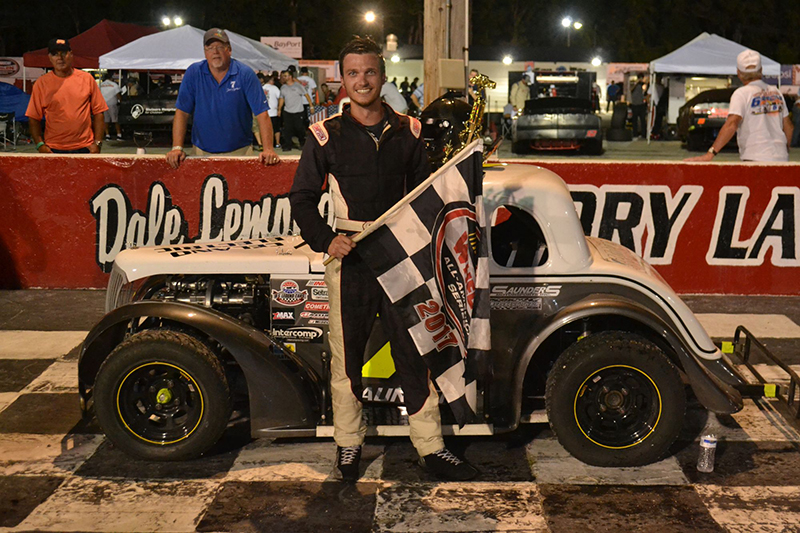 Cycle City Corps Legends 25 Laps: Tommy Jackson Jr earned the race pole sporting a lap set at 18.393 seconds for his second pole on the year. Spencer Saunders was just twenty two thousandths of a second off the pole sitters time and would start second on the grid. Showing speed in qualifying was third place machine of Brian May along with Cody Carlton and Woody Howard to complete the five best. Tommy Jackson Jr would show the field to the green and by turn two securing the point was Jackson. But soon after, the battle for the lead began as Spencer Saunders stuck a nose in before the race had its first caution. After a brief restart and a lengthy second caution, racing resumed with Jackson leading at the halfway. Latter portions of the race saw Jackson and Saunders battle with Saunders getting the eventual lead. But coming back was Jackson who would retake the lead as laps were whining down in the race. Suddenly, the battle was on once again with Saunders having none of it as he was able to get by Jackson one more time to go on and win the Legends race feature. Spencer Saunders from Victory lane, “Yes it’s been a long time coming, I think the last time in Victory Lane was in 2014 so what, three years ago”, questioned Saunders. “Just a lot of second, thirds and a lot of hard work has gone into this car”. I just want to thank all the fans who come out and support me every week”. 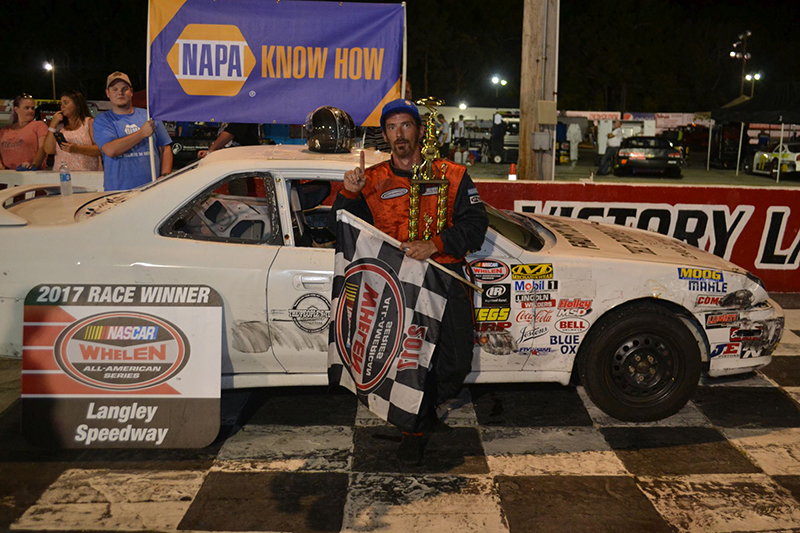 Bojangles Enduro’s 30 Laps: Brandon Hardon pulled the one pill to earn the race pole in Enduro race action. Ray Haynes would start second with Cody Esposito, Richard Quinn and Ronald Klein as the top five to start the feature. Green flag waved and wasn’t long before Richard Quinn took command of the race lead. Several laps into the race, Quinn continued to lead but making moves getting to the two spot on the grid was Alex Floroff. But back up front, Richard Quinn would not let up and easily dominated the event for the race win. Richard Quinn had this to say in Victory Lane, “I got lucky with the pill draw tonight”, claims the race winner. “I ended up starting on the outside of the second row, a lot of the faster guys started a bit further back. Just a great race all together, the car was wicked loose tonight, I just didn’t know how I was able to keep it in one piece. I appreciate everyone coming out and staying to watch us tonight”.