Another exciting week of racing took place at Larry King Law’s Langley Speedway as title sponsor NAPA Night at the Races played host to six race divisions on the near flat banked oval at Langley Speedway. Part of the evenings highlights was the honoring of the armed forces as Army, Navy, Air Force, Marines and the Coast guard were all honored before a stellar crowd. The evening race card began with division sponsored Trip Anderson Realtor Winged Champs followed up by the Taylor Waste Disposal Late Models in twin race events. Then taking the track on the evening were the Old Skool Video Games Super Streets and back in action were the Riverside Paper Pro- Sixes. Completing the nights highly anticipated evening were the Carroll’s Automotive UCAR’s and the Bojangles Enduro’s. Six featured divisions, two hundred seventy seven laps and a lot of attitude would make up this night at Larry King Law’s Langley Speedway. This is how the race action went down. 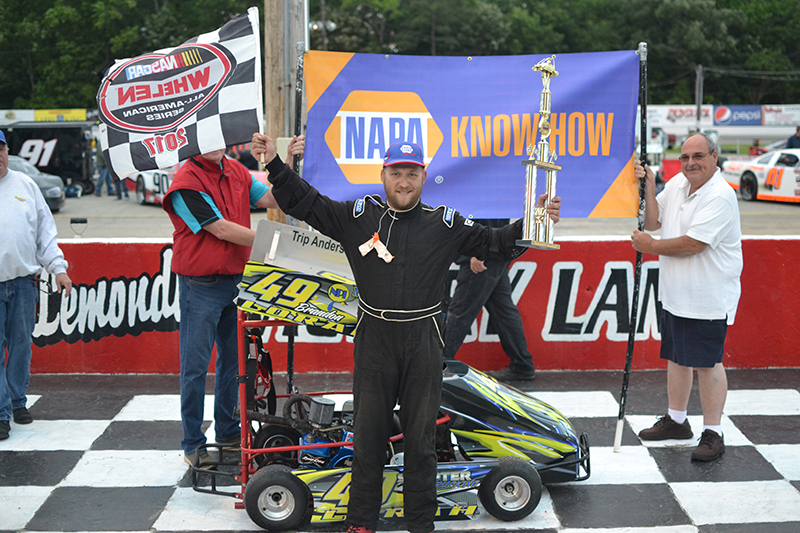 Trip Anderson Realtor Winged Champs 20 laps: Race action began with the Winged Champ division as Brandon Lorah was best in qualifying. The lap set at 23.056 seconds for the pole was followed by Charlie Ray Lorah 23.614 for a share of the front row. Pole sitter Brandon Lorah went flag to flag for the race win. After a scary wreck to the start of the race involving Mattisen Morrill who was reported to be ok after being transported to the local hospital for observation. Race action continued with the pole sitter showing the way, Charlie Ray Lorah would mirror the moves of the leader but could never mount the charge needed to challenge for the race win. Brandon Lorah in Victory Lane… “When you little brother is a three time champion, or as we like to call him, the king of the wing, when I see that fifty nine behind me all I got to do is hit the gas and hang on”. expressed the race winner. 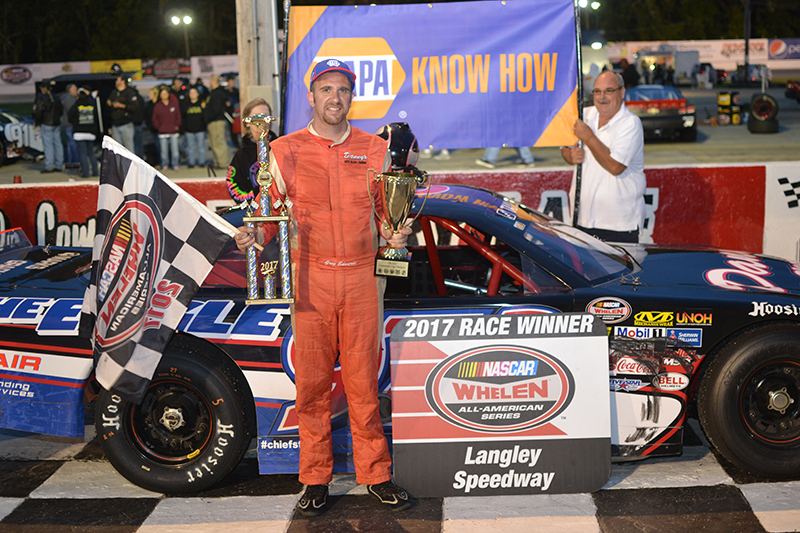 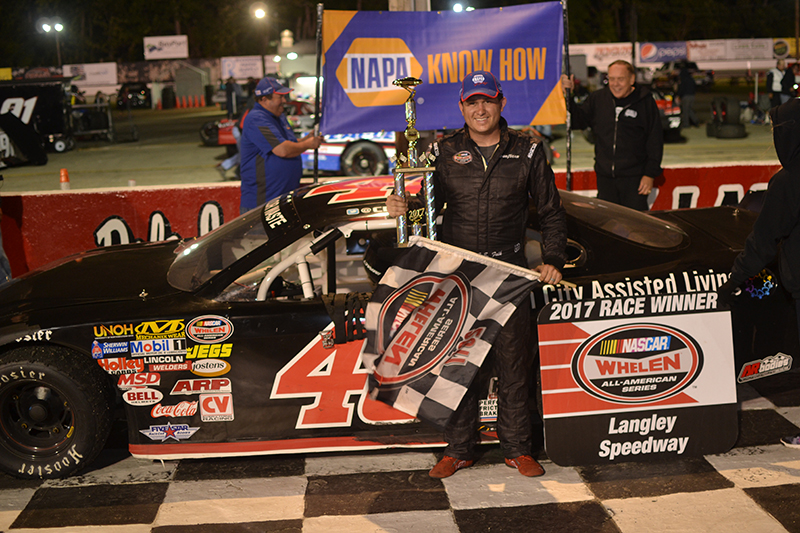 Taylor Waste Services Late Models 66 laps: CE Falk in his first appearance at Larry King Law’s Langley Speedway put his rocket on the pole sporting a lap at 15.958 seconds. Greg Edwards lap just six hundredths off the pole speed was second best in the field for a share of the front row. Race action began as CE Falk showed the nineteen car field to the green and quickly established point. But that all changed when Greg Edwards took away the lead on lap eight in a caution free event. Connor Hall would pace the race leader before falling victim to the charging Matt Waltz who finished second in the race. Greg Edwards had this to say in Victory Lane, “Thank God for the U.S. Air force, that’s twice we’ve won the Commanders Cup with them. This car, we’ve been struggling a bit the last couple of races saving tires and just keeping tires on it. We made some changes and it did what it was supposed to do”, explained Edwards. “I was trying not to run the car to hard cause everyone knows we got to run another sixty six laps”.
In the second race feature for the Late Model division, the mandatory eight car invert was issued giving the race pole to Danny Edwards Jr. Race winner from the first feature Greg Edwards would start in the eight spot of the grid. Green flag racing was over the speedway as Danny Edwards Jr was on point in the nineteen car field. But the race lead changed hands when CE Falk took the spot in the early portion of the race. Several race cautions halted the race action forcing Falk to hold off the charges of Danny Edwards Jr, Matt Waltz. But it was the final race caution that provided the thrills as Mark Wertz from the outside was able to lead lap fifty eight but Falk was just too much crossing the stripe first. CE Falk from Victory Lane, “That was a Hail Mary if I ever threw one there”, said the race winner. “We sucked, no bottom line about it, the eagle, Waltz and all those guys were way better than us. I thought for sure that I would be going back to Carolina with a qualifying car and not a race car. We just made some adjustments, learned a lot of things in testing that don’t work. You keep those things in the back of your mind for a rainy day but it didn’t rain. But damn does it feel good to be back in Victory Lane at Langley Speedway”. 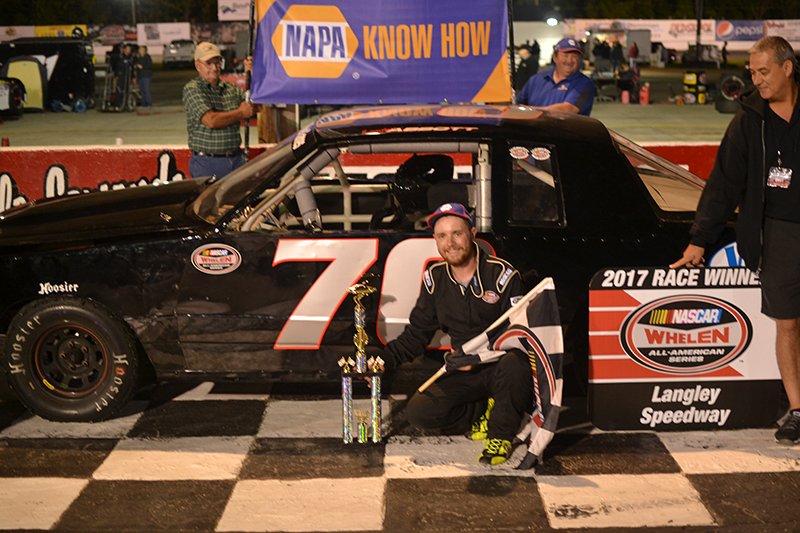 Old Skool Video Games Super Streets 40 laps: In the afternoon times trials, Landon Abbott earned the race pole position posting a lap at 19.052 seconds. Teammate Renno Marchetti IV was second quickest followed up by Sean Calway and Dale Parro to make up the second row. Green flag waved and quickly establishing the race lead was pole sitter Landon Abbott. Sean Calway would give chase to the leader before falling off and surrendering the two spot to Renno Marchetti IV. The race experienced four race cautions with the final two as green, white, checkers to decide the race and hopes of knocking off Abbott on point. But race leader Landon Abbott was having none of it and went on to win his third race on the year. Landon Abbott in Victory Lane… “It was getting pretty warm in there (the car), I didn’t think the race was ever going to end caution after caution”, expressed Abbott. “I can’t thank these guys enough, this was by far the best car I’ve ever had at this track”. 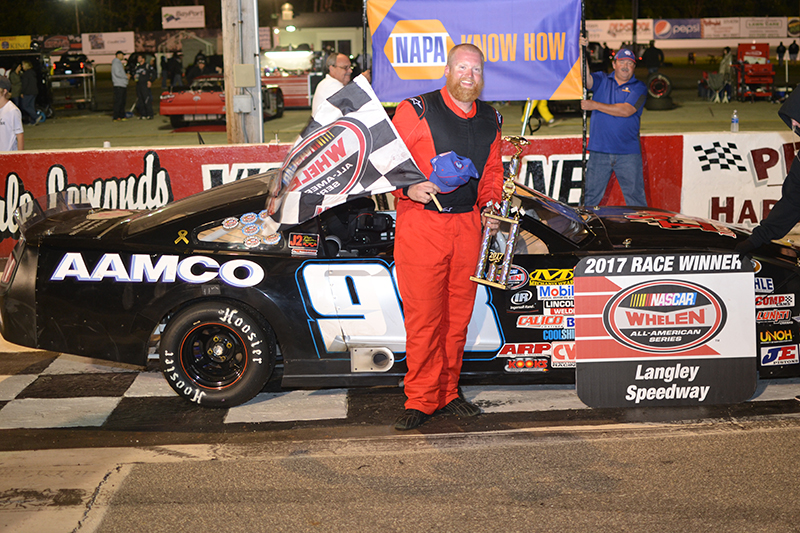 Riverside Paper Pro- Six 30 laps: Adam Florian was the divisions pole sitter turning in a lap at 17.435 seconds around Larry King Law’s Langley Speedway. Travis Wall just missed an evening on the race pole by a mere twenty three thousandths of a second. Race action got underway and it was Adam Florian out front early in the race. Travis Wall would chase the race leader for much of the event but the charge of Cody Carlton in the final few circuits forced Wall to third. But back up front, Florian continued his winning ways crossing the stripe first for his third win on the year. Abbott had this to say in Victory Lane… “Oh yeah, the car was good, we worked a lot this week in practice. Made a lot of changes trying to get the car just a bit better, the car was just solid all the way around”, said the race winner.
Race Results:
1. #98 Adam Florian; 30
2. #4 Cody Carlton; 30
3. #44 Travis Wall; 30
4. #26 Bobby Hall; 30
5. #21 Tyler McLaughlin; 29
6. #23 Casey Sipe; DQ’ed 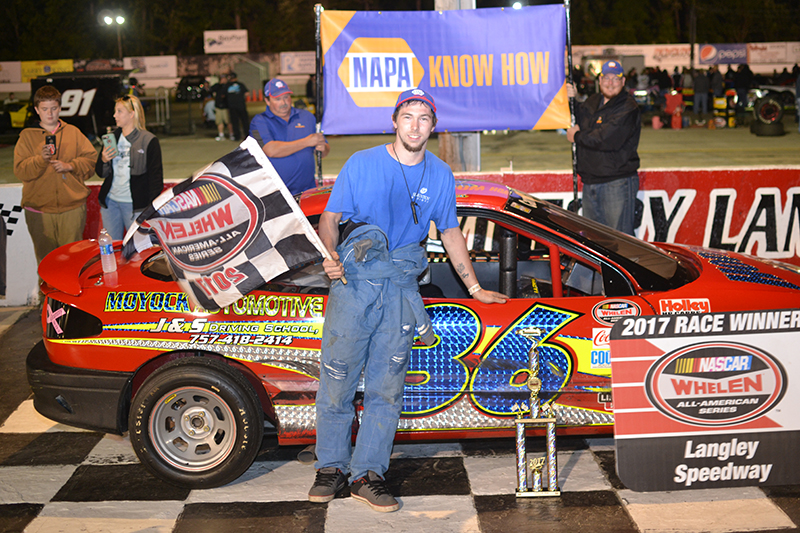 Carroll’s Automotive UCar’s 25 laps: Michael Waters followed up his race win last time out with this week’s pole in the UCar race division. The lap was set at 19.535 seconds as Eric Schaffer was equal to the task but just sixteen thousandths slower but easily worthy to share the front row. Action began in a caution free event with pole sitter Waters setting the race pace. Eric Schaffer would follow the leaders every move and would eventually get to the leaders bumper to get at least one shove but Michael Waters would hang on. After the shove, Schaffer could not make the charge in the final few laps as Michael Waters goes on for the race win. Michael Waters from Victory Lane… “Yeah, believe it or not, the car slowed up for qualifying”, claimed the race winner. “I thought Eric was going to out qualify me but I guess the track just slowed up, yeah, I’m just really glad to be back here (Victory Lane).
Race results:
1. #36 Michael Waters; 25
2. #3 Eric Schaffer; 25
3. #28 Tommy Gildea; 25
4. #18 Brandon Wood; 25
5. #53 Zac Stongle; 25
6. #14 Tillman Heuer; 5 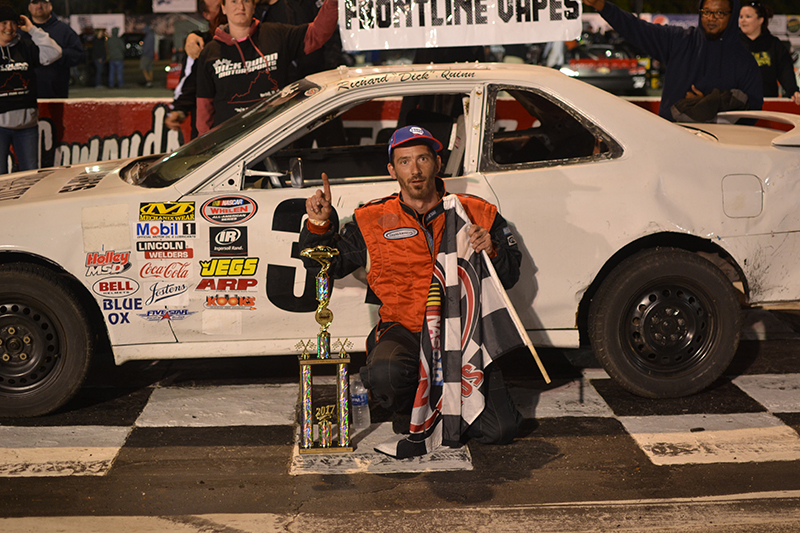