Nascar’s Whelen Modified Tour made its next stop in the 2017 race season at Larry King Law’s Langley Speedway this past weekend for The City of Hampton 150. Twenty-eight entries looked to try their fortunes on the .395-mile oval in search of some race hardware and the handsome check to go along with it. Also on tap were the Cycle City Corp Bandoleros back in race action along with the Cycle City Corp Legends Division. Included in the nights racing program were the Harris Truck & Auto Super Trucks and the Pepsi Grand Stocks. Here’s the recap of all the exciting race action from Larry King Law’s Langley Speedway. 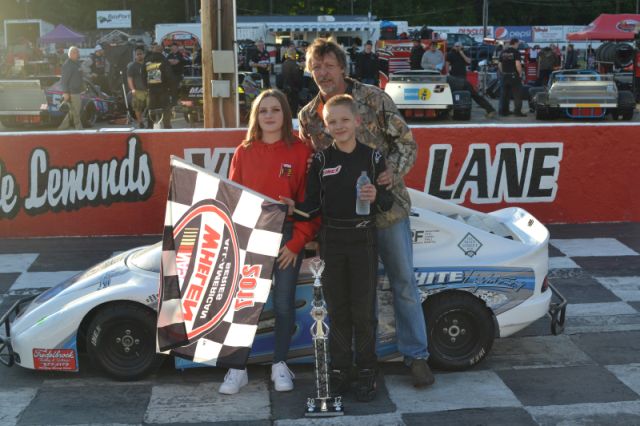 CYCLE CITY CORP BANDOLERO’S (15 LAPS): Starting off the evening was the Casey Cycle City Bandoleros division featuring fifteen laps of race action. Jacob Puttman was on pole with a lap set at 21.719 seconds with Bradley Kilby just ninety one thousandths off the speed of Puttman. Green flag waved and to the front on point was Jacob Puttman. From the two spot on the grid, Kilby would be up to the task and giving chase. But going green to checkers, Jacob Puttman held off the last lap charge of Bradley Kilby to win the evenings opening feature. Puttman had this to say from Victory Lane, “Thank you, my dad did all the work”, says the race winner. When asked about the win and Mother’s Day, “Yeah, I want to dedicate to my mom”.
Race Results: 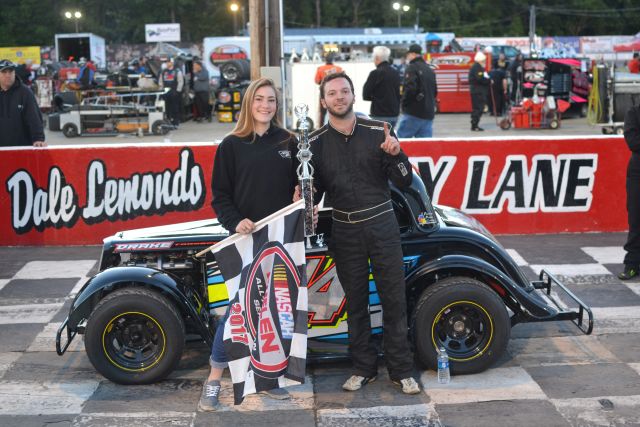 CYCLE CITY CORP LEGENDS (25 LAPS): In the Legends series, Cody Carlton was fastest in qualifying besting out a fifteen car field sporting a lap at 18.049 seconds. Sharing the front row with Carlton was Brian May whose lap was just as impressive just fifty two thousandths of a second slower. Spencer Saunders, Jamie Price and Matt Dail made up the five best. Green flag race action waved with Carlton showing the way and securing the point coming out of turn two. Brian May would occupy the two spot before Spencer Saunders was able to get by just a few laps later. The race was slowed down by two cautions which Saunders would take his shots at the race leader but surviving them both and crossing the stripe first was race winner Cody Carlton. From Victory Lane, Carlton had this to say, “I can’t thank enough these guys that help me week in week out. First off I got to thank God for without him, none of this would be responsible. Second, got to thank Jody for giving me a top notch piece to run, it’s been all up to me since the first race. I mean, this thing came right out the box fast, finally we were able to get it done”. 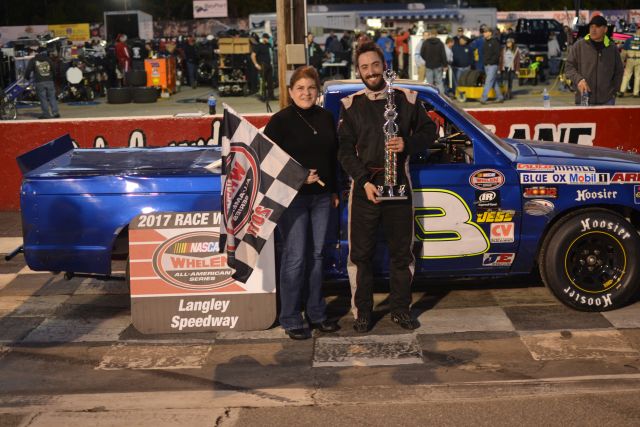 Harris Truck and Auto Super Trucks (25 laps): Brad Adams was on pole for the Super Truck Division clipping off a lap at 19.131 seconds and with him on the front row was Richard Ellis showing good speed as well. Going into the evening hours came the drop of the green flag, setting up shop and on point was the pole sitter Brad Adams. Just a few laps in, Adams easily establish a ten car length lead leaving Richard Ellis and Ronald Klein to battle out second amongst themselves. Meanwhile, Adams continued to dominate the event going flag to flag for the race win. Last lap was interesting to watch as Ellis made one last dash to get by Klein but slipped out of two and had to settle for third. 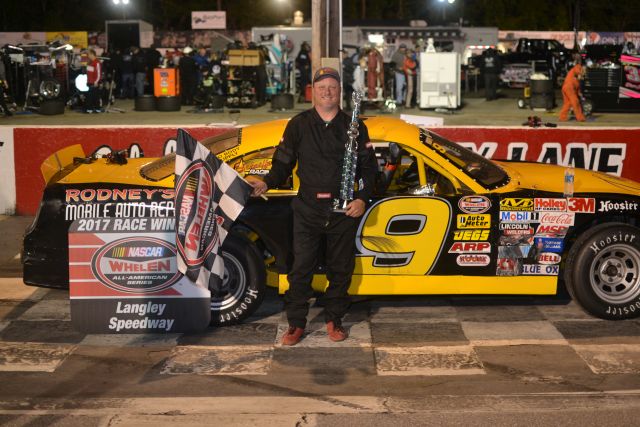 Pepsi Grand Stocks (40 laps): Mark Frye was the Grand Stock division fastest in the afternoon time trials posting a lap at 18.255 seconds. Rodney Boyd who was also fast earned a share of the front row with Frye, Tommy Sweeney, Paul Lubno and Johnathan White made up the top five in qualifying. Green flag waved and Mark Frye began his march for the race win. But soon after, Rodney Boyd close in on the leader and made the pass with fifteen laps complete. The race was later halted by only a single caution just past the halfway point but that would not slow down Rodney Boyd as he would go on to win for the second time in the series. Mark Frye and Tommy Sweeney battled hard finishing second and third respectfully. Rodney Boyd spoke from Victory Lane, “Yes indeed, I love the wins, I love winning here at Langley Speedway, it’s a great feeling. I tell ya, when we brought the car back out, we went through the whole car and we knew we could make it better. I gotta thank all my crew, we nut and bolt checked everything. It’s awesome, so glad for Bill Mullis, just awesome being in Victory Lane”. 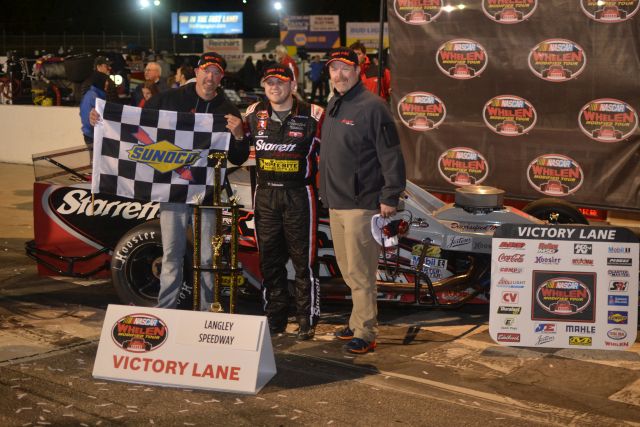 NASCAR Whelen Modified Series (150 laps): Doug Coby earned the race pole, besting out twenty four other competitors posting a hot lap at 15.495 seconds. Eric Goodale claimed his spot on the front row by throwing down a lap just eighty thousandths slower than the pole sitter. Timmy Solomito, Rob Summers and Rowan Pennink were the grids five fastest. Flagman displayed the green to the field and the pole setter Coby, quickly set the pace in the lead. Solomito along with Goodale would battle hard early for second but in the early stages it was all Doug Coby out front in the clean air. The race reached the halfway slowed by three caution periods with Doug Coby continuing to lead and stretching to nearly twelve lengths over as Timmy Solomito running second. Later in the event, lap ninety nine brought out the competition caution as race teams would get to take on two tires and adjustments to settle the race feature. Back to the green, benefiting from an earlier caution, Rob Summers would assume the race lead until Doug Coby on lap one hundred eight reclaimed the race lead. Latter stages of the race saw the race leader come under assault as Timmy Solomito was knocking on the door for the race lead. Then on lap one forty four, Solomito would turn the race leader to bring out the caution and take over the race lead. The race was slowed back down for the final time in the event setting up a green white checker finish. Back under the green, Solomito got the start he needed and would go on to win at Langley Speedway. Timmy Solomito spoke in Victory Lane. “Yeah, I never like to win a race like that but um, it was good hard racing. When the cars are so close like that and I gotta couple good runs on him, he kept closing the door. I have nothing but respect for Doug”, explains the race winner. “It’s just hard racing and I don’t like to race that way, I don’t like to win that way. Unfortunately, that’s the way the cards fell tonight, not proud of the win but it is a win”.