It was, “Pepsi Night at the Races”, our feature race sponsor hosting another exciting week of racing at Langley Speedway. The evenings race card would highlight five race divisions which includes the Riverside Paper Pro-Six, Carroll’s Automotive UCARs, Pepsi Grand Stocks, Larry King Law Modifieds and the Bojangles Enduros. Coming from a highly successful opening night just one week ago, the anticipation and the excitement of race action is back again at Langley Speedway. 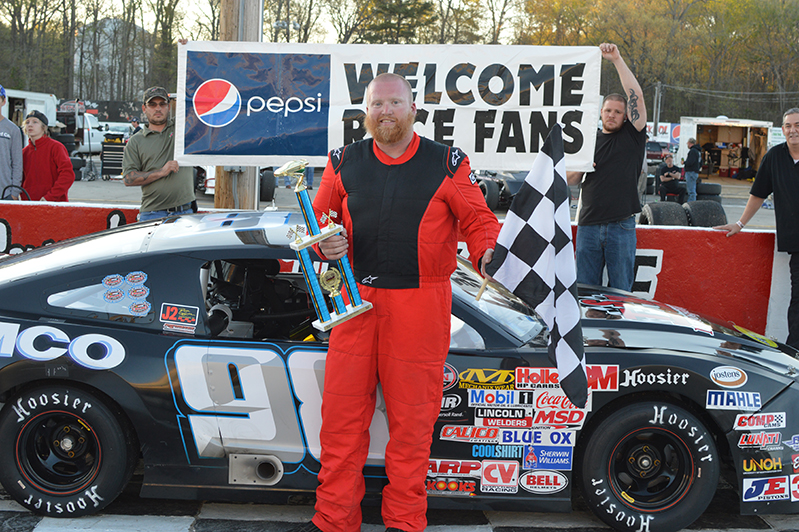 Riverside Paper Pro-Six 30 laps: Adam Florian was the quickest amidst a six car field in qualifying posting a lap at 17.175 seconds around the .395 mile oval at Langley Speedway. Cody Carlton’s lap was good enough to share the front row with Florian starting second. Pole sitter Adam Florian went from green to checkers in a caution free race to the stripe, leading all thirty laps of the event. Casey Sipe would give chase finishing second but its Florian drawing first blood in the Riverside Paper Pro-Six division. “The car was good, we’ve been working on it and practice and stuff between Tommy, my dad, brother and everybody. My dad and Tommy really have been putting in the hours on this car, my brother already had the car dialed in and all I had to do was just drive it”, explained Florian. 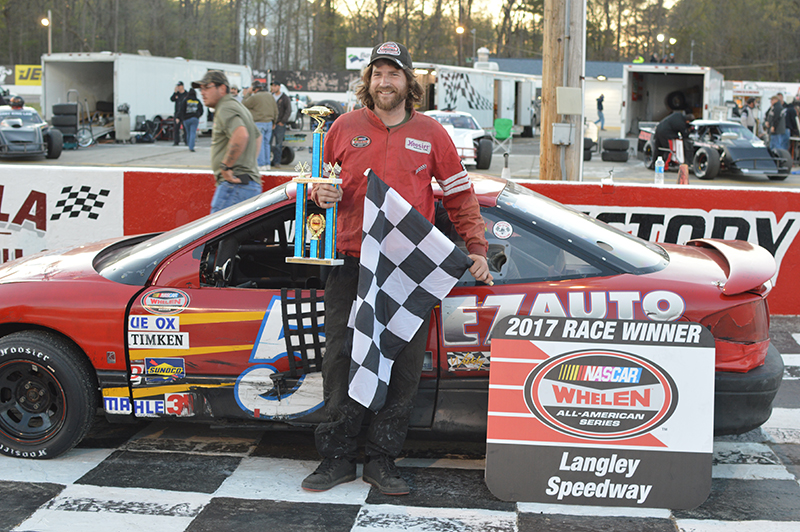 Carroll’s Automotive UCAR’s 25 laps: Jesse Jones took the afternoon time trials laying down his fast lap on the pole at 19.041 seconds, Mike Perkins would start shotgun to the leader in row one. Green flag waved as Jones would show the field through turns one and two. Jones would lead the first four circuits before Eric Schaffer took the lead on lap five. Several laps later, Jones was able to get along side of the leader to battle for the race win with just two laps to go. Out of turn four side by side, Jesse Jones would win by a nose at the line over Eric Schaffer. “You know, I told everyone, between Tim, Eric, me and Mike Perkins. You can throw a blanket over any of us, I mean with new tires and as strong as these cars are and as hungry as we are to get back to Langley. Man, its just racing and just having fun”, says Jesse Jones. 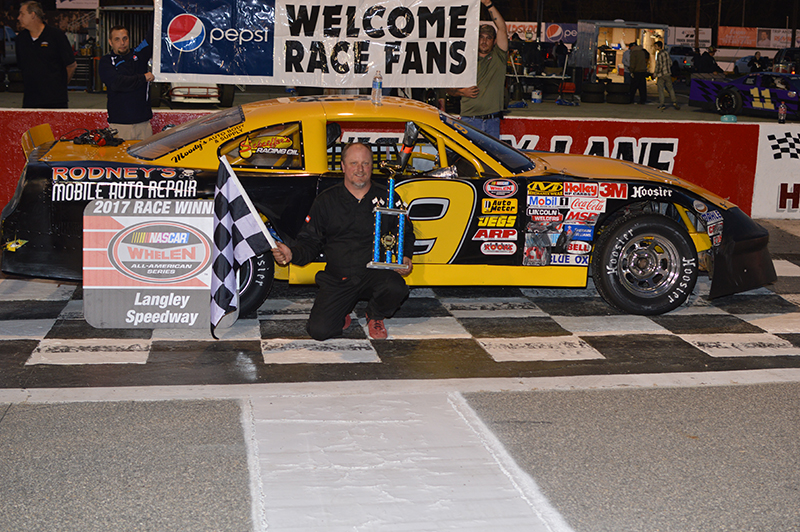 Pepsi Grand Stock’s 40 laps: Mark Frye was fastest in the afternoon time trials in the Pepsi Grand Stock division with a lap at 18.142 seconds. Tommy Sweeney was just fourteen thousandths slower earning him a share of the front row. Green flag waved and pole sitter Mark Frye secured the race lead coming out of turn two. But by lap fifteen, here would come Rodney Boyd to battle for the top spot and earned the race lead on lap fifteen. Boyd would lead the final twenty five circuits crossing the stripe first to his first win of the 2017 race season. Tommy Sweeney would finish second to the leader in a strong run of his own. “It feels wonderful to be back at Langley, so glad Bill was able to purchase this track. It’s like opening night victory, I just got no words to say, its just an awesome feeling”, shared race winner Rodney Boyd. 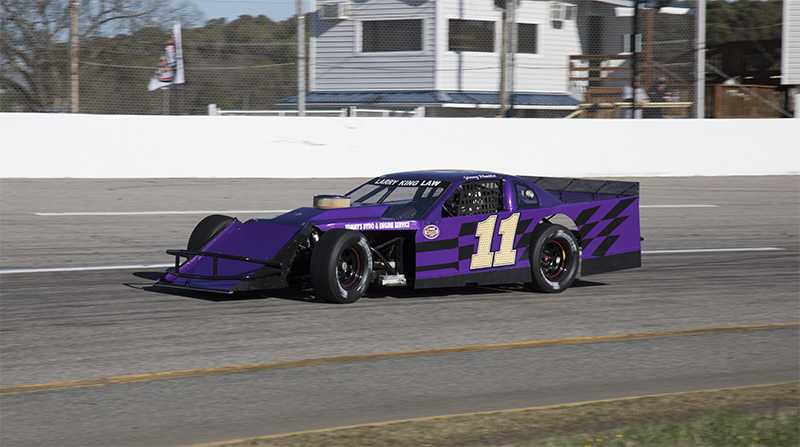 Larry King Law Modified’s 50 laps: Robbie Babb was fastest in the afternoon qualifying posting his pole setting lap at 16.426 seconds. Rival Shawn Balluzzo was just eighteen thousands of a second slower starting second on the grid in the Larry King Law Modified race. Green flag waved and it was Robbie Babb securing the point, showing the fourteen car field into turn one. But on lap two, the race was under a red flag for the hard crash of Jon Largena into the infield wall on the front stretch. Once cleared, Babb would resume his race lead, but the caution would come back out for Balluzzo whose engine expired on lap twenty. Back to the green, Babb showed the way till Bubba Johnston got into the race leader bringing out the caution with just ten laps remaining in the fifty lap feature. Both Babb and Johnston would have to restart at the tail end of the field. The race was stalled by three other caution periods and benefitting from them all was Bubba Johnston who made his way through the field to win the Modified race feature. After post race technical inspection, Bubba Johnston failed post race tech, handing the race win to Jimmy Humblett. 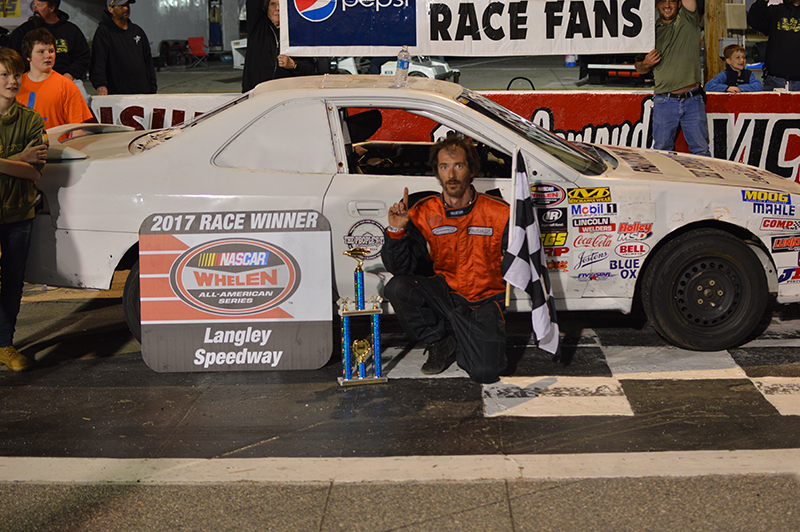 Bojangle’s Enduro’s 30 laps: Tyler Baker pulled the one pill to become the pole sitter and would show the field into turn one as green flag racing began. Baker’s lead would go short lived when on lap thirteen and starting from the rear of the field. Richard Quinn worked his way to the front becoming the second race leader. The race experienced a few more stops in the action before Quinn would cross the stripe first for the race win. Tyler Baker would finish second in the feature. “There’s a lot of good guys out here tonight, a lot of guys been running out here for years in multiple divisions. It feels great to be back home, racing at Langley and of course the fans. Cause you all is what makes this sport worth running for in the first place”, said race winner Richard Quinn.