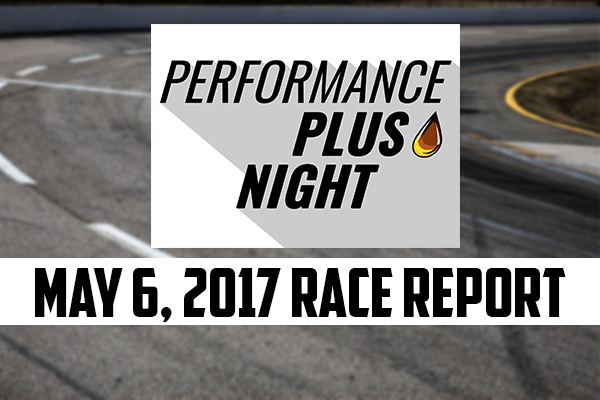 It was a huge night of racing at Larry King Law’s Langley Speedway as eight races were on the evenings schedule. Featured divisions included the Trip Anderson Realtor Winged Karts, followed up by the Larry King Law Modifieds along with the Old Skool Video Games Super Streets. Also seeing action on the night was the Riverside Paper Pro Six’s, Taylor Waste Services Late Models, Carroll’s Automotive UCAR’s and the Bojangles Enduro’s. On a cool evening at the famed .395 oval, three hundred and eleven laps would make up, “Performance Plus Night”, at the races and here’s the recap of the nights racing.

Trip Anderson Realtor Winged Karts 20 laps: Jake Harberts would show the twenty two kart field to the green after starting from the pole as Tillman Heuer would share the front row with the pole sitter when the green flag waved. Harberts on the start easily established the race lead en-route to the checkered flag leading all twenty laps of the feature. Brandon Lorah made it interesting by making a final lap turn four move to the outside in a side by side finish at the stripe to finish second. Jake Harberts from Victory Lane, “Its really the qualifying, just being able to get out front, being able to hold my line and being careful not to get turned. To come out here, get on pole and lead every lap, that’s just what you want to do but it doesn’t always work out that way. I’m just glad Langley Speedway is back open”.

Larry King Law’s Modifieds Twin 33 laps: Robbie Babb lead the afternoon time trials with a fast lap at 16.679 seconds with rival Shawn Balluzzo just thirty six thousandths off the pole sitters time to earn his spot on the front row. Green flag waved and the pole sitter wasted no time establishing his race lead. Halfway point in the race saw Matt Carter begin his march closing in on the leader but in the final few laps that remained, Babb was just a bit better going flag to flag for the race win. “Yeah we changed a little something between qualifying and the race, we hit on a little something. I think we need to adjust a little bit more, car started to free up a bit so, will see what we can do for the second one, gotta long way to go starting eighth”, explained Robbie Babb. In the second Larry King Law’s Modified race feature saw an eight car invert to the field according to the way the first race finished. As a result, the race pole belonged to Chris Humblett who showed the ten car field to the green. Under the green, early race leader was Chris Humblett but soon became the races first caution handing over the race lead to Shawn Balluzzo. From there, cautions were plenty with Balluzzo holding off anyone’s charge on the restarts. Showing the way to the checkered flag, Shawn Balluzzo was the race winner. “Yeah, its been really hard this year, haven’t really had any good luck. This is all, thanks to the crew, I mean, I really don’t remember when we last slept. Everybody worked through the night, they got it all together and I really got to thank everybody”, shared race winner Shawn Balluzzo.

Old Skool Video Games Super Streets 40 laps: Sammy Gaita would start from the pole in the Super Street division with a lap set at 19.104 seconds. The eleven car field saw the green flag wave as forty laps would decide the race feature. Gaita the pole sitter would lead the first eight laps of the event before Landon Abbott assumed the race lead after an early race caution. Abbott would have to hold off the hard charge from teammate Renno Marchetti late in the green flag run but Landon Abbott proved to had the hot rod on the night for the race win. “Everybody on this race team, we kinda missed it in qualifying but we put it all back together and had a great car in the race and I can’t thank them enough”, says race winner Landon Abbott.

Riverside Paper Pro Six’s 30 laps: Adam Florian bested a seven car field to earn the pole in afternoon qualifying. His lap of 17.385 seconds was sixty eight thousandths quicker then the fast lap of Travis Wall to settle the front row. Green flag race action began as the pole sitter with just a few laps in established a substantial race lead thanks in part to some three wide racing from Bobby Hall, Travis Wall and Casey Sipe. When the dust finally settled down from that race battle for second which was earned by Hall. Florian had set sail and was leading by as much as fourteen lengths. Hall at the halfway began closing down on the leader but would run out of laps as Adam Florian crossed the stripe first and back in Victory Lane. Adam Florian from Victory Lane, “Like I said earlier, the car is already built, its set up for me its good to go. Started to get tight a bit right there at the end and was searching around for a groove to run in so I wouldn’t have so much wheel in it”. Gotta thank my sponsors, my dad is a big part of this , having fun trying to win some races”.

Taylor Waste Services Late Models 100 laps: Greg Edwards had the faster hot rod in qualifying, narrowly beating out Matt Waltz by a mere three thousandths of a second for the evenings race pole at 15.974 seconds. Greg Edwards from there would show the way to the seventeen car field as the green flag waved at Larry King Law’s Langley Speedway. Early on in the feature saw Greg Edwards jump out to the lead with Matt Waltz mirroring his every move. Several laps later, Waltz began to close in on the leader and on lap twenty four, took over the race lead. After a brief caution to the race, Connor Hall made his move to the front getting underneath Waltz for the race lead as the halfway to the race was near. Laps later, Nick Smith would briefly take the lead but with the cross over, Connor Hall was able to regain his race lead as the race entered into the latter stages. Then after a series of cautions and a series of lead changes, Nick Smith emerged as the race leader and in a thriller at Larry King Law’s Langley Speedway, won the race feature. “Yeah, I wasn’t looking forward to every caution there at the end but it was the cautions at the beginning that helped me win this race. The car was good and we were fast but it would have been so hard to make up the ground starting so far back. I really didn’t know what kind of car we had, first couple of race we’ve been a little off, so were searching and found a little something tonight”, explained race winner Nick Smith.

Carroll’s Automotive UCAR’S 25 laps: Eric Schaffer was the quickest on point for the UCAR division sporting a fast lap set at 19.325 seconds. Michael Waters proved to be up to the task slightly slower but still deserving to be on the front row. Race action began as pole sitter Eric Schaffer lead the early race laps before Michael Waters was able to get around to lead some laps of his own. From there and in the clean air, race leader Michael Waters would go on in a caution free UCAR race to win the evenings feature. Michael Waters in Victory Lane, “Yeah, I mean, Dean built a helluva car. Like to thank Carroll’s Automotive for sponsoring the division, my girlfriend Courtney for letting me drive it. My family, there always there with me, I’m just glad to be able to come out tonight and be in Victory Lane”.

Bojangles Enduro’s 30 laps: Austin Davis was the races pole sitter when the green flag waved in the Bojangles Enduro race division. Fourteen cars made up the race feature and it wasn’t long before the races first lead change as Tyler Baker took control. But that control was short lived as Richard Quinn used a slower car as a pick to gain the race lead. It was there that Quinn set sail on his second Enduro series division win.