Next EventSpring Day of Destruction/March 18, 2023/Larry King Law's Langley Speedway
Mosquito Joe & ERA Realtors Night at the Races
By: Mark Rogers Jr
Hampton, VA (May 5th 2018) – Headed into the late spring season month of May, already the race drama of each racing division at Larry King Laws Langley Speedway has taken its shape. While competition has been the obvious, there’s been no shortage of the fine line known as give and take. Being said, in comes to play of all the frustrations of the known, lack of give and take. Though, many of the drivers would soon just forget, for the others, forgetting is not an option, its motivation. Taylor Waste Services Late Models highlighted the exciting race card in this week’s race action. Also providing race thrills would be the Cycle City Corp Bandeloros, Cycle City Corp Legends, Harris Truck Super Shop Super Trucks, Pepsi Grand Stocks and the Bojangles Enduros. With the recent grand events such as the Denny Hamlin Short Track Showdown and last week’s K&N East Series behind us. Race teams will look to settle in, focus on the weekly racing and position themselves for a run at a track championship. Here’s a recap of how the evening fared. 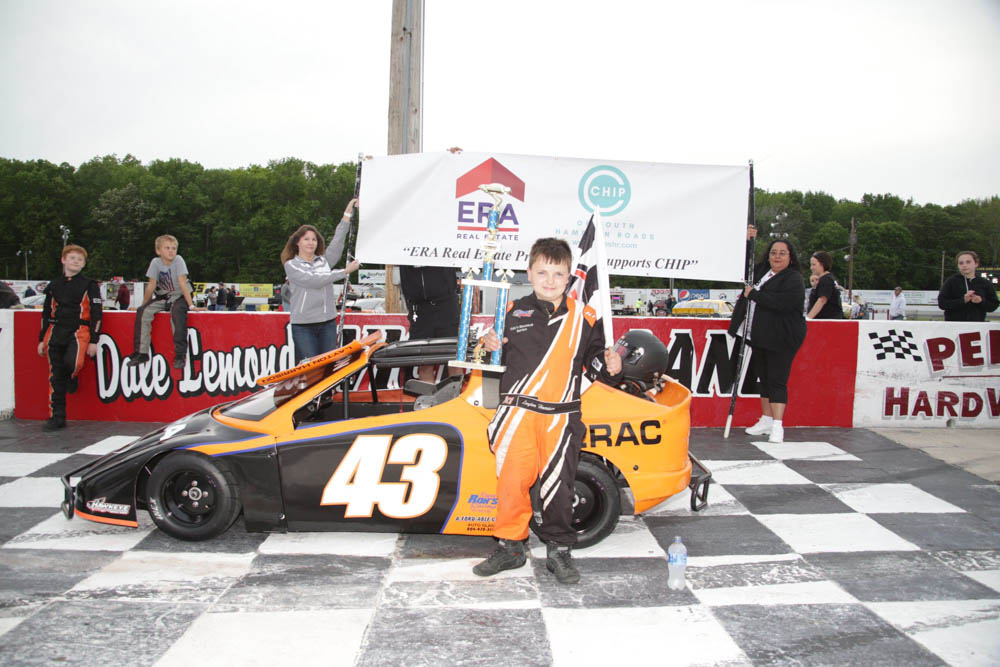 Cycle City Corp Bandeloros 15 Laps: Layton Harrison was the Bandeloros race winner when the race action ended. To start his day, Layton Harrison put his machine back on pole for the second time this season. Posting his fast lap at 21.089 seconds, he knocked off the effort of Wyatt Philyaw who was only thirty one thousandths off the pace. Ryley Music, Autumn Weaver and Wesley Newell were the five best in Bandeloros qualifying. Green flag began the feature with pole sitter Layton Harrison showing the way early. A quick brush up with the leaders involving Philyaw, Music and Weaver allowed the leader to open up a half a straightaway lead by the halfway point in the race. The early race incident was the all the race leader Harrison needed as he would go on to win the fifteen lap race feature. Layton Harrison from Victory Lane, “I like to thank all my sponsors, Jimmy’s Wielding Produce Center. Generac Hails Electric, mom, dad, Jason and Landon”. 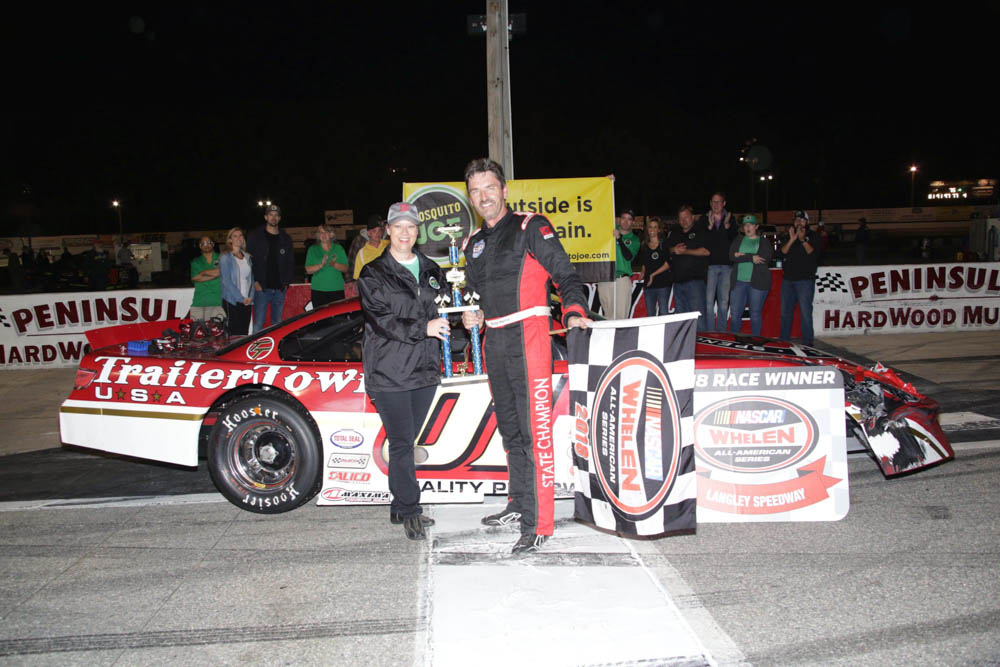 Taylor Waste Services Late Models Twin 75 Laps: In Late Model Series race action, Philip Morris would take both features bringing his win total to four on the season at Larry King Laws Langley Speedway. Late Model action began with the afternoon time trials lead by Philip Morris who for the second time was the pole sitter this season at Larry King Law’s Langley Speedway. Morris’s pole lap was set at 15.541 seconds with Mark Wertz to his side who earned his spot in a share of the front row. Brenden Queen, Danny Edwards Jr and Connor Hall were all three, four and five respectively on the grid. The green flag was shown to the pole sitter and into turn one did the thirteen car grid go. After a quick, lap one battle with Mark Wertz for the lead, Philip Morris set sail and into an early eight car length lead. Laps later in the green flag run saw Connor Hall as an early mover to the front getting by Brenden Queen for second and setting sights on the race leader. Greg Edwards joined the fray, making himself known by running third and showing to be the fastest car on the track but Philip Morris continued to show the way. Laps later in the caution free run saw Greg Edwards work his way around Connor Hall for second just before the halfway. Lap traffic soon came into play as did a late race caution but nothing was denying Philip Morris of Victory Lane. “Forest’s cars run fast everywhere, wherever they go they’re good and just not with me driving, other drivers do well too. I think there’s a lot of tire saving behind me going on so I don’t know what’s going to happen in this second race but they sure gave me a great car in the first race no question”.
In the Late Model nightcap, per NASCAR rules, a mandatory eight car invert was applied to the start of the second feature. The invert gave Connor Hall the race pole with race winner Philip Morris electing to start at the rear for max points in chase of a National title. Green flag waved as twelve cars answered the bell to come race. Green was displayed and pole sitter Connor Hall began work. Needing just two laps to mount up a three car length lead, Justin Carroll was off to a rocket like start as well bringing Mark Wertz with him. After a quick caution, Hall would continue as the race leader but action was hot for second as Carroll and Wertz battled before Carroll earning the spot. The race would see its second caution when Philip Morris would get into Greg Edwards setting up another restart to the race. With the green back in the air, Hall once again secured the point. This time, Brenden Queen would haunt every move of the race leader. Laps later, the battle for the lead ensued as Hall and Queen traded places several times before Philip Morris was able to go by both of them to steal the race lead. From there, Philip Morris motored his way to sweep both Late Model races. Morris from Victory Lane, “Yeah, I hated that with Greg, I thought he saw me there, evidently he didn’t. I backed off hoping he could save it but he was to far around. Gotta thank these guys who work so hard down here, I gotta pinch myself that I’m on a flat track and were in Victory Lane”. 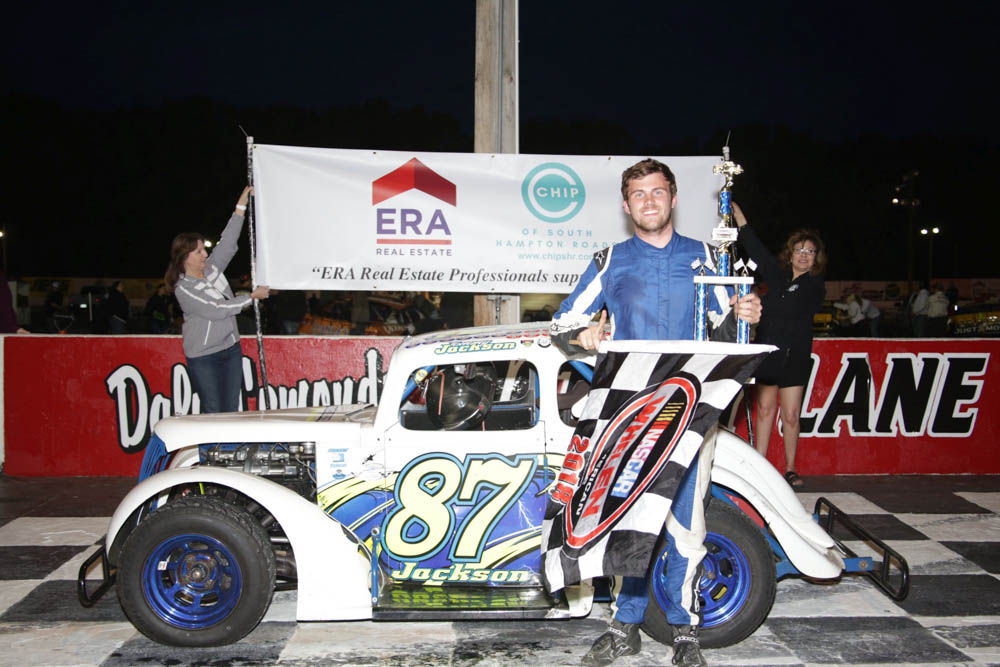 Cycle City Corp Legends 25 Laps: Tommy Jackson Jr continued his strong start to the season by picking up his third win of the year. In starting the day for the Legends series, Spencer Saunders continued his charge with his third pole on the season. Saunders lap at 17.873 seconds beat out the lap of Tommy Jackson Jr just twenty three thousandths of a second. Rounding out the five fastest in Legends qualifying would be Daniel Sylvestri, Jamie Price and Ryan Center. Green flag waved and by turn two did the pole sitter secure the point and with Tommy Jackson Jr in tow, the battle for the race lead soon ensued. Then, laps later saw Saunders slip up in turn two, opening the door for Jackson who easily made his way through to take the race lead. By the halfway, Jackson was clearly on a mission with an impressive fifteen car length lead and would go on to win for the third time this season at Larry King Laws Langley Speedway. Tommy Jackson Jr from Victory Lane, “I was glad to get back by him on the outside cause I didn’t really to fall any further back. We were a little further off when we unloaded and thought it was due to the weather. It really came around in the race, I was excited, the car has been its best in race trim so far this year, can’t thank the fans enough for coming out”. 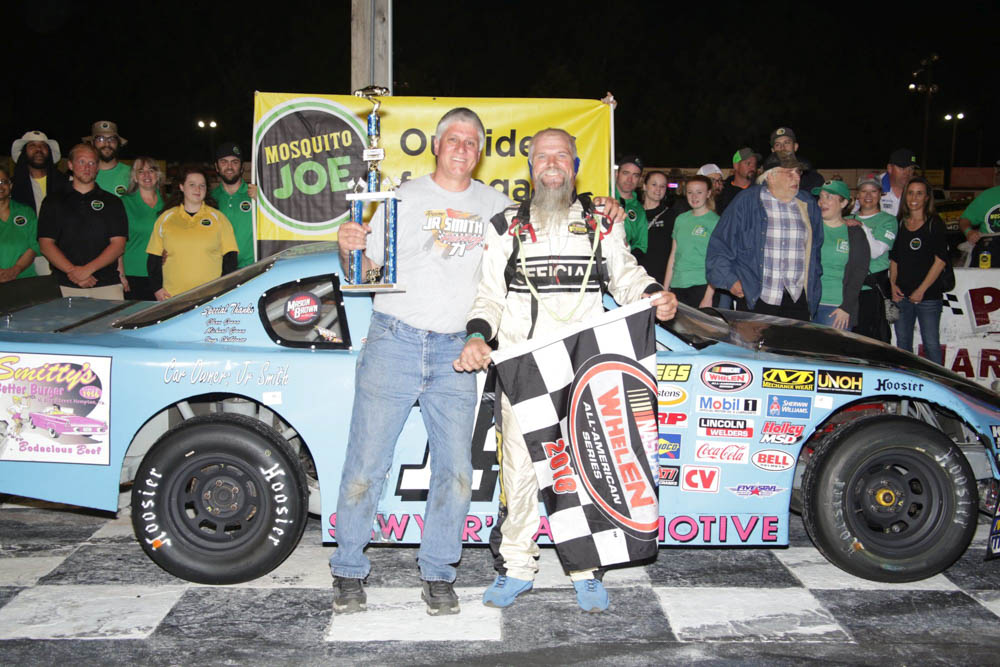 Pepsi Grand Stocks 40 Laps: Paul Lubno was money in the Grand Stock division, picking up his first win of the season. In the always highly contested Grand Stock race division, Tim Wilson proved to be the fastest sporting up a 17.684 second lap to earn his second pole on the season. Sammy Gaita was worthy of the outside pole with his run followed by Paul Lubno, Rodney Boyd and Louis Pasderetz as the five best in qualifying. Green flag was waved and the pole sitter showed the field on into turn one. At the end of lap one, Wilson began to hit his marks in search of mounting up a race lead. Paul Lubno was hitting his as well, mirroring the line of the race leader, add Sammy Gaita to the mix and nose to tail were the leaders. Laps later in the run saw Paul Lubno take the race lead with Sammy Gaita taking second before the race would experience a series of cautions as the halfway went up on the board. Back to the green, the leader Paul Lubno was able to mount up a half a straightaway lead when Boyd and Wilson battled for second. Wilson eventually would get by Boyd but needed a caution for a shot at Lubno but the caution never came. Paul Lubno picked up his first Grand Stock win on the year. Lubno from Victory Lane, “I want to thank my car owner for the effort he puts in, want to thank my crew. Want to thank my dad, want to thank my son, he comes out to help me. Also, my sponsors and Charlie High for the power plant, once you get her to the ground, she’s strong”. 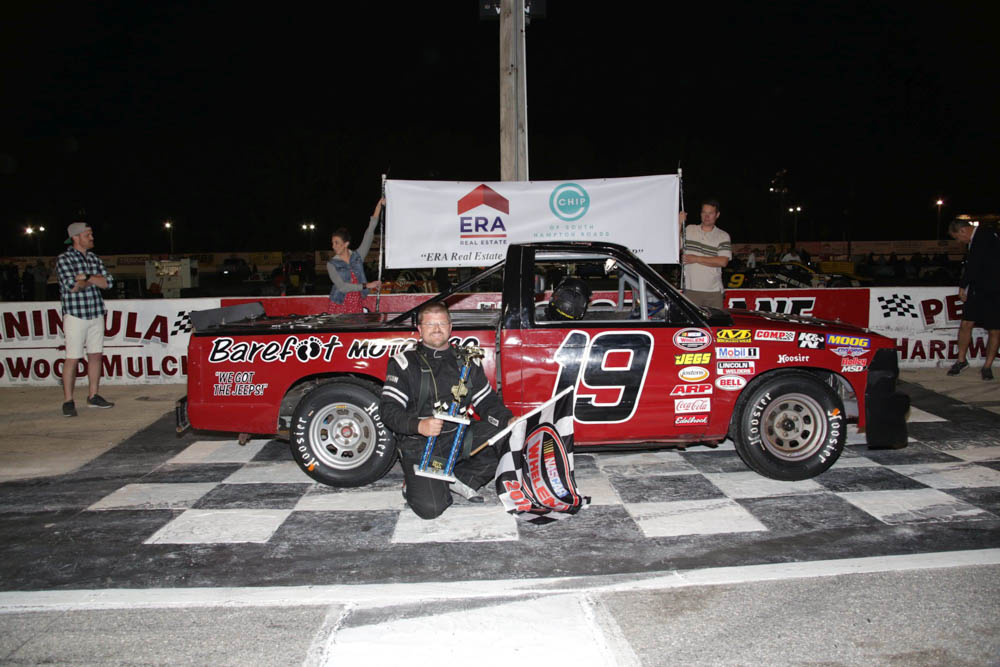 Harris Truck Super Shop Super Trucks 25 Laps: In Super Truck competition, Dustin Mullins picked up his third win on the season. The afternoon qualifying went well once again for Dustin Mullins who nabbed up another race pole. His lap set at 18.823 seconds bested the lap of Jacob Carr who earned his spot on the front row. Ryan Huff, Elysia Potter and Rick Poust were the fastest in Super truck qualifying. The green was shown to the field and the race drama soon began. Outside pole sitter Jacob Carr would jump the start, having to lift and give the point back to the pole sitter. As a result, Elysia Potter would jack up Jacob Carr allowing Dustin Mullins to easily drive away. Laps later, Mullins created a half a straightaway lead over Keith Wheeler who would give chase but, in a caution free race, Wheeler could not close the gap. Dustin Mullins goes flag to flag for the race win. Mullins in Victory Lane, “Today has been a whirlwind and I couldn’t have done this without Pete, he’s been here all day fixing everything I’ve broke. We broke two throttle cables and a few other things as well. Dad up there spotting for me I appreciate it a bunch. Bill Wallace, he’s done so much for me that I can’t even express”.
Race Results: 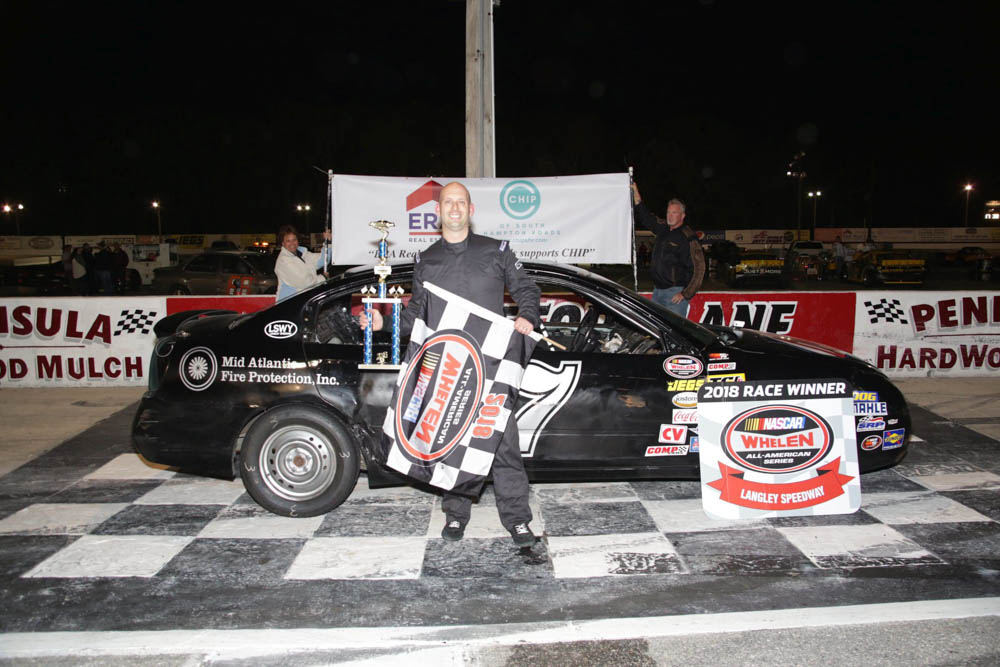 Bojangles Enduros 30 Laps: Alex Floroff continued his Enduro season dominance in fine fashion. Earlier in the afternoon, the field was set according to the pill draw giving Mickey Chinn the race pole. Also benefitting from the pill draw and starting on the front row would be John Babbey. Green flag would wave and the lead enjoyed by the pole sitter was brief as Ronald Klein would lead the first lap. Laps later, Alex Floroff was in the mix, taking the leaders four wide to capture the race lead to the thrill of the fans. From there, Floroff would have to navigate through the field enroute to yet another Enduro series victory. Rodney Davis and Ronald Klein had respectable finishes in second and third. Floroff from Victory Lane, “I know, it was a little wild there, obviously Ronald and Rodney, they put on a great show. Just got to thank all my sponsors, Mid Atlantic Fire Protections, Chick’s Oyster bar for helping me out to win this race”.