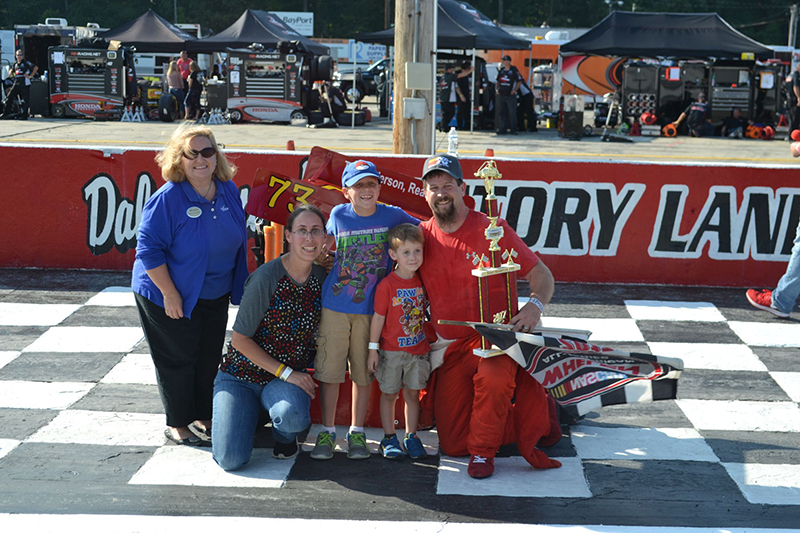 Trip Anderson Realtor Winged Champ Karts 20 Laps: Tillman Heuer picked up his second Winged Champ Kart pole of the season posting up his fast lap at 23.374 seconds. Garry Osborne would earn a share of the front row just twenty nine thousandths off the pole speed with Charlie Ray Lorah, Bradley Gower and Tyler Jackson completed the five best in qualifying. Green flag was displayed to the field with the pole sitter showing the way early. Big movers in the event were the karts of Aaron Leach, Harry Leach and Chris Bechtel making it into the top five just before the halfway. But back up front, Tillman Heuer would surrender his lead to the charging Harry Leach with brother Aaron Leach doing the pushing. From there, the two were in sync and it was Harry Leach crossing the stripe first. Harry Leach from Victory Lane, “It’s been a long time coming”, claimed Leach about the win. “I’ve been racing karts a long time, this is probably the easiest division to drive technically, but the absolute hardest to win. To find the speed it needed, it doesn’t ever qualify any good but it sure does race good”. 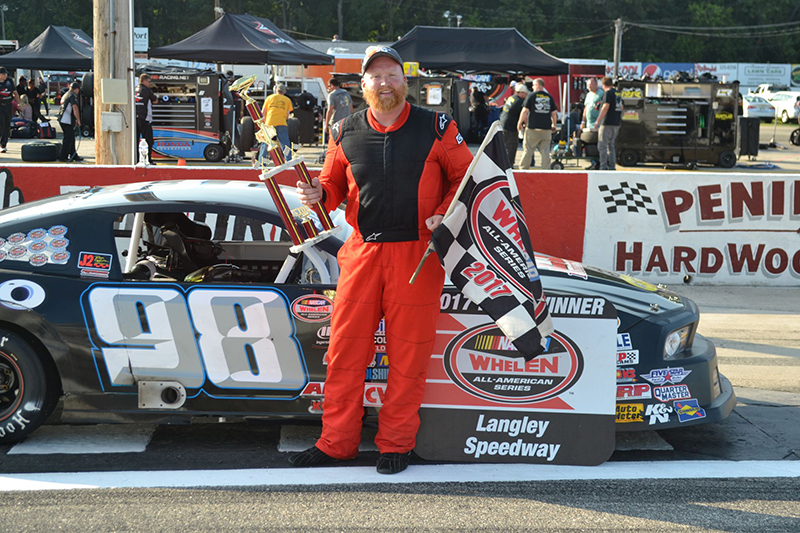 Riverside Paper Pro Six 30 Laps: Justin Fuller lead the afternoon qualifying, picking up his second pole of the season with a lap set at 17.575 seconds. Adam Florian would start in row one as well to the right of the pole sitter with Bobby Hall, Brad Adams and Travis Wall were the top five in qualifying. Green flag would wave as Justin Fuller would lead the eight car field into turn one. Soon after, a stop to the action as the caution flag waved involving a spin with Colby Sipe. Back to the green, the race leader fails to get going, losing the lead to Bobby Hall but soon was able to hit the reset button and charge his way back to the front. Laps later, Fuller was able to run down race leader Bobby Hall and take back the lead just before the halfway. After the races second caution, Adam Florian took the race lead and quickly mounted up an eight car length lead as the race approached the latter stages. With just a few laps remaining, Justin Fuller made it interesting by getting to the rear of the leader before slipping and from there, Adam Florian went on to win his sixth of the year. Florian from Victory Lane, “This evening, they definitely made me work as hard as I could in the car”, said the winner. “It was real close racing, mixed it up a bunch, thank all these fans for coming out on this warm evening.

Old Skool Video Games Super Streets 40 Laps: Sammy Gaita had the hot wheel in Super Street qualifying with a lap at 19.292 seconds. Chris Roberts would start shotgun to the pole sitter with Landon Abbott, Dale Parro and Randy Akers as the five best in Super Street qualifying. Green flag waved and the pole sitter Sammy Gaita would show the field of twelve into turn one. Several laps into the event, both Gaita and Roberts was able to get away from the field and soon began to battle for the race lead. Not long into the battle before Roberts worked his way around Gaita and became the new race leader. Randy Akers was seen coming through the field showing third before Gaita would take his shots at the leader before settling on the two spot just before the halfway. After a few cautions and exchanges for the race lead later, Chris Roberts would secure the point and would go on to win his first Super street feature. Chris Roberts in Victory Lane, “It was good racing Sammy, nobody was getting any traction out of one and two. You got the sun straight down over there and nobody was getting any traction”, claimed Roberts. “There’s so many good cars in this class, it’s hard to get out front by yourself like that”. 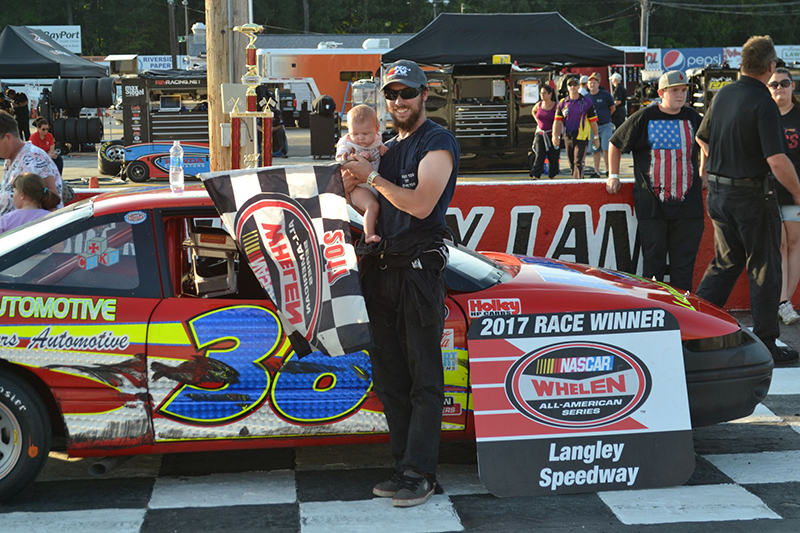 Carroll’s Automotive UCAR’s 25 Laps: Michael Waters continued his UCAR series dominance by posting up a 19.210 second lap to earn the race pole. Tommy Gildea would earn the start on the front row in second in UCAR qualifying. Green flag would wave and not long before pole sitter Waters would show a seven car length lead early in the event. Eric Schaffer who had to start last by missing qualifying would soon show second in the field as Gildea was giving chase. Both Schaffer and Gildea would give it a go but in an impressive feat of ten wins in a row. Michael Waters would go on to win in the UCAR race division. Michael Waters from Victory Lane, “It takes a lot of work to run one of these”, claimed Waters the race winner. “I was worried at the green flag that the K&N tires that they run, we didn’t put any rubber down on the track so I was worried going into turn one that I would loop it. Luckily there was enough heat in the tires, it stuck. I’m just glad to be out here and get ten wins this season”. 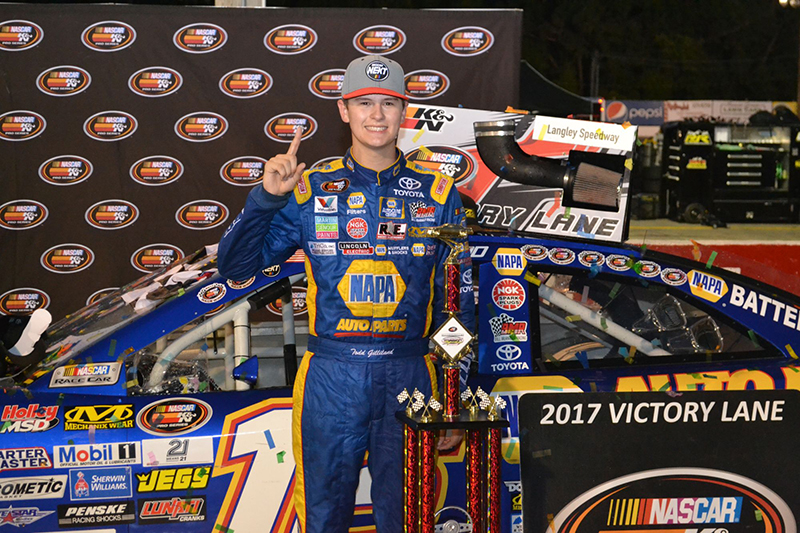 K&N East Series 150 Laps: Todd Gilliland picked up the K&N East Series pole boasting a lap set at 16.369 seconds. The lap was better by eighty four thousandths over second place starter Collin Cabre and worthy of a share in row one. On back there was Dillion Basset, Ronnie Basset Jr and Chase Purdy to round out the five best in qualifying. Green flag waved and like a shot from a cannon, Todd Gilliland easily secured the race lead. From the three spot on the grid, Dillion Bassett was able to get around Collin Cabre for second who then soon set his sights on running down the leader. Shortly after, Bassett would run down the leader, gave a quick tap and took the race lead just before the races second caution. The race would then experience several cautions involving Chuck Buchanan Jr before heading into the races longest green flag run. Dillion Bassett at the halfway was still the race leader enjoying an eight car length lead as Gilliland remained second on the grid. Collin Cabre, Chase Purdy and Dominique Van Weringen from starting thirteenth on the grid was the top five. But back up front, Todd Gilliland would run down the leader Dillion Bassett and retake the race lead as the race entered into the latter stages. The race would see one more caution in which Todd Gilliland would nail the restart to secure the race lead but all eyes were on the efforts made by Dominique Van Weringen as she was able to get to third. But back up front it was Todd Gilliland who would motor on to victory and win, “The Visit Hampton VA 150”. Gilliland from Victory Lane, “This Napa Auto Parts Toyota Camry was hooked up tonight”, an excited Gilliland proclaimed. “All these guys from Bill McNally Racing are the best guys here I feel like. They’re always encouraging when were not the fastest, they’re always trying to pick us up to get us there. Like I said, they’re never afraid to try something different to be even better than we are”.