Hampton, VA (6-8-19) On an evening promoting and encouraging the use of a designated driver when consuming alcoholic beverages. It was the, “Who’s your Driver. Org”, Night at the Races at Larry King Law’s Langley Speedway. Welcoming to the speedway for the first time was The CARS Late Model Tour in a one hundred and twenty five lap feature. With them comes their own series points drama where points leader Josh Berry and Bobby McCarty are both in a fierce battle. Also, on the exciting race card would be the Cycle City Corp Bandoleros and Legends in contested series point races themselves. The Old Skool Video Games Super Streets would also be a part of the evenings fare before a stellar crowd of race fans. Here’s the recap of the racing action. 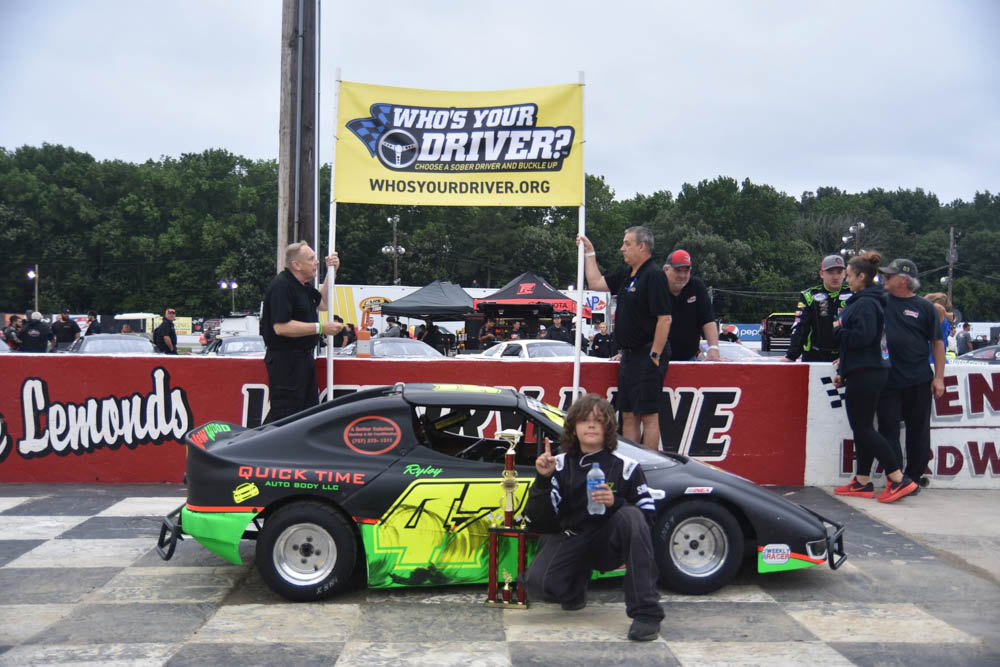 Cycle City Corp Bandoleros 15 Laps: Series points leader Ryley Music began the evenings racing by putting his ride on the pole. Posting his 21.051 second lap bettered Jacob Derrick’s efforts by a mere three thousandths. Green flag would wave with Ryley Music showing the field into turn one. Coming around and out of turn four would be the races first caution taking out Jacob Derrick from the feature. Back to green flag racing, Logan Clark would inherit the lead but the lead was short lived when Ryley Music came blazing through. Halfway in the race, Clark would hang tough and keeping the leader well within his sights. But at this point, the leader was hitting his marks and going unchallenged while building up his race lead. Laps later, more of the same as Ryley Music would go on to win his third feature of the season in Bando series action. Ryley Music from Victory Lane, “Yeah Jacob Derrick, we got down there in three and four I felt like he didn’t leave me any room. I don’t if he cut down or I got tight and moved up on him but it is what it is, it’s racing”. 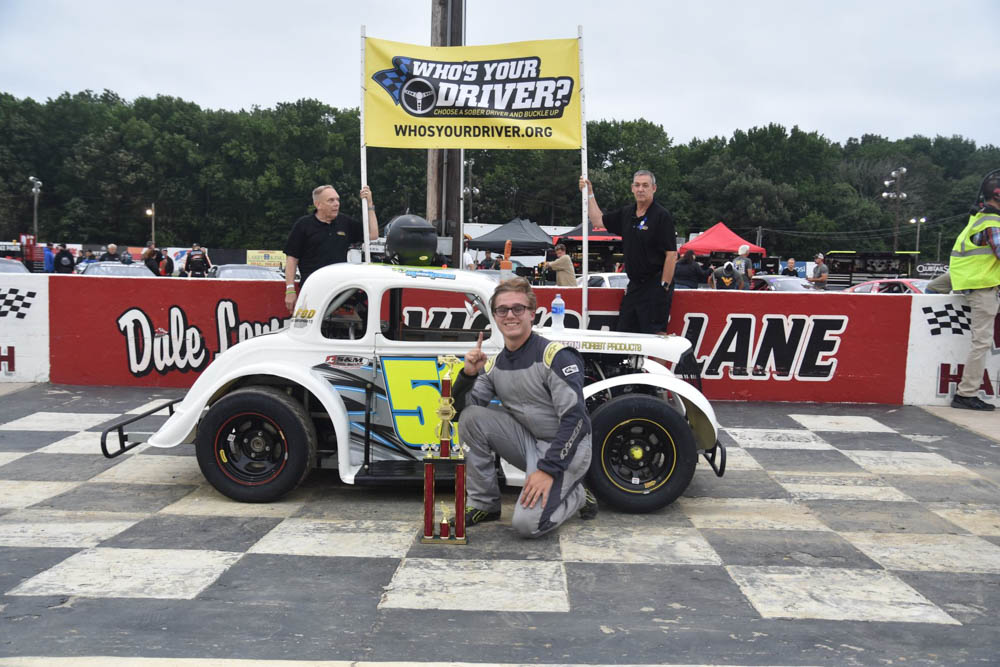 Cycle City Corp Legends: Ryan Matthews picked up the Legends series pole by rounding the .397 mile oval at 17.873 seconds. Colby Flowers earned his place on the front row taking the two spot as Spencer Saunders, Connor Jones and Ryan Center as qualifying’s best. With the green waving, pole sitter Ryan Matthews showed the eight car grid on into turn one. With Matthews as the early leader, Spencer Saunders would put some pressure on the leader with a few taps to the bumper before settling in second. Laps later, action at the front resumed as Saunders continued to let the leader know he’s there. Connor Jones would show some movement towards the front catching the third place car of Colby Flowers as the halfway drew near. Halfway in the feature, Ryan Matthews continued to lead as Spencer Saunders haunted the leaders every move. But then lap traffic would come into play where race leader Ryan Matthews fared much better than Spencer Saunders. Getting the separation that was needed, from there, Matthews would go flag to flag for the race win. Ryan Matthews had this to say, “Yeah, he wore me out (Saunders) but I was able to hang in there, pull away from him a little bit and came away with the checkered flag. Spencer would kinda tap in the center of the turn trying to move me out the way. But if I used the gas and the brake at the right time, he wouldn’t be able to push me. I would just do that, hung on for the win”. 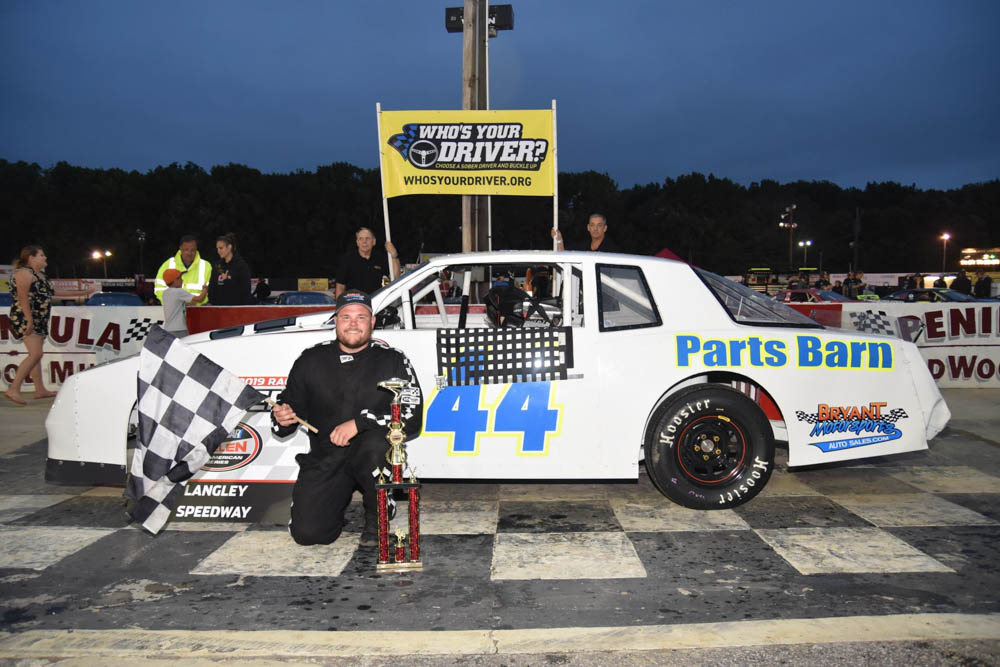 Old Skool Video Games Super Streets 40 Laps: Colby Vance would be the pole sitter in Super Street qualifying. His fast lap was set at 18.524 seconds with Renno Marchetti getting the second spot in his qualifying run. Nick Sample, Gordon Weeks and Dale Parro completed the divisions five best in qualifying. Pole sitter Colby Vance lead the seventeen car grid to green and leading lap one would be pole sitter Colby Vance as outside row one starter Renno Marchetti getting the sluggish start. Coming through also would be Nick Sample along with Dale Parro running second and third as the race began. Marchetti would regroup settling in fourth as the race leader Colby Vance would soon put distance on second spot Nick Sample. The race would be slowed by its first caution when Zac Stongle went around. Back to the green, race leader Colby Vance gets the rocket like start leaving Nick Sample in the clutches of Dale Parro but before the battle ever picked up, the second caution of the race. After a series of cautions, when the racing resumed, the halfway in the feature was soon near. This time around, Renno Marchetti would harass the race leader Colby Vance but the race leader would hold off the charge for now as Marchetti settles in on second. Another series of race cautions would hold up the race action as caution laps at this point were being counted. Latter stages saw the Colby Vance, Renno Marchetti show pick back up as Marchetti gives the leader the bumper but to no avail. Gordon Weeks, Randy Akers and Sean Calway were making moves late in the feature but back up front, Colby Vance would pull away. Final lap and going wire to wire, Colby Vance wins the caution filled Super Street feature. Vance in Victory Lane, “I didn’t know when I had the car to beat all race long, when Renno got up to us. The last three or four laps we had spread the lead out, I kept asking my spotter where is he but he wouldn’t tell me as he wanted me to focus forward. Gotta thank all my guys that’s helped me and sponsored me. I can’t thank everybody enough for this opportunity, this is just awesome”. 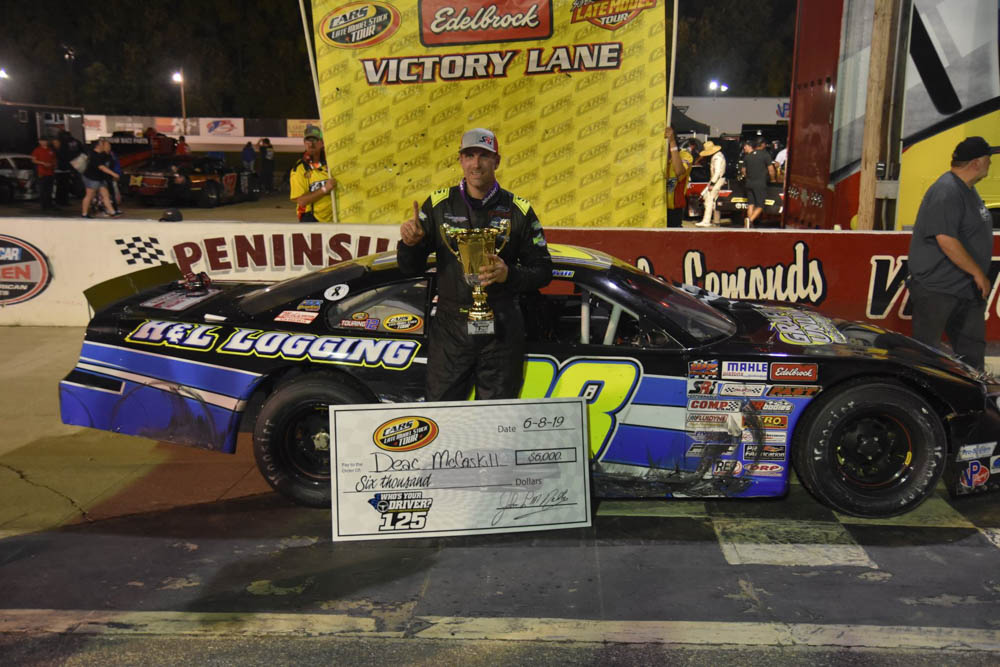 CARS Late Model Tour 125 Laps: Layne Riggs bested twenty four others to capture the CARS Late Model Tour pole. The lap was clocked at 15.869 seconds with Bobby McCarty taking the two spot on the grid just thirty nine thousandths off the pole time. Justin T Carroll, Brenden Queen and Josh Berry were the five quickest in qualifying. Notables Justin S Carroll started ninth, Deac McCaskill tenth and Tommy Lemons Jr fourteenth. With the green waving in the air, Layne Riggs would lead lap one of the race feature. Bobby McCarty would take a look underneath but decided against it. One lap later, it was three wide for the race lead as Justin T Carroll made it work to take over the race lead. Coming along with him would be Brenden Queen, Josh Berry along with Bobby McCarty, Layne Riggs regrouping fourth and fifth. Several laps in the early portions of the feature saw the leaders all single file and nearly all nose to tail. But then the races first caution as Zack St. Onge would go around in turn two. With the races first restart, Justin T Carroll easily maintained the lead. Berry, McCarty, Matthews and Queen were the top five and all in chase of the leader. The field would bunch back up again as the second caution came when Camden Gullie may have had help spinning in turn four. Green flag would wave once again and once again, Justin T Carroll gets the great restart. Bobby McCarty gets one as well taking second from Berry. But just as soon as the lap is completed, the third caution flag waves. Ensuing restart and Justin T Carroll keeps his race lead secured as this time Josh Berry picks up the second spot. With the field now settling down and getting tuned in for the long green flag run. The leaders however, were still nose to tail and following each other’s line. Halfway in the feature showed Justin T Carroll continuing to show the way. Content with the second spot for now, Josh Berry and the leaders would soon encounter lap traffic. Suddenly, Ronald Hill along with Corey Heim goes spinning and narrowly missing the turn three wall. Second half of the race feature, the restart belonged to Justin T Carroll who would jump out to a three car length lead courtesy of the brief battle for second between McCarty and Berry. With Berry earning the spot, wasn’t long when McCarty regrouped and soon took the second place spot bringing with him Sammy Smith up to third. But then the action heated up at the front when Bobby McCarty gets to the bumper of the race leader. With a bump to the rear of Carroll, the door opened and coming through to take the lead would be Bobby McCarty on lap eighty one. Josh Berry would do likewise to take second when yet another race caution slowed the pace. With the restart on the way, McCarty gets the jump when the green was displayed with Josh Berry quickly getting in line. Justin T Carroll, Layne Riggs and Sammy Smith were the top five at this point with just thirty circuits left. Making late race moves showed Deac McCaskill working his way to fourth and looking to put pressure on Layne Riggs for third. Latter stages of the feature saw second place Josh Berry go around in controversial fashion as the cautions continued. With twenty laps left, the green flag waved and McCarty secures the point out of turn two. McCaskill gives Riggs a quick look but has to settle for third. Finals laps saw McCarty with a three car length lead as Riggs had to contend with McCaskill. While that battle ensued, McCarty was in search of the checkered flag when a last lap caution set up a green, white checker finish. Final restart, McCarty holds the lead but then comes Riggs with a bump to get by the leader. Going into three, McCarty returns the favor and Riggs would go up the hill. Benefitting is Deac McCaskill who takes the lead and goes on to win the CARS Late Model Tour feature. McCaskill in Victory Lane. “Unbelievable, I was kinda content with third place”, said the race winner. “God always has a plan, I just stuck with it, believed in it, trust in his faith and now were standing here in Victory Lane. My daughter said you going to win this race, I said honey I’ve only been there one time and if I can come out of here with a top five finish, I would be really happy”.