Hampton, VA (8-19-18) Mother Nature, as much as were all thankful for the wonderful things that grow from her rains however is not always sympathetic to local short track racing programs. Larry King Law’s Langley Speedway and its season thriller Late Model feature, “The Hampton Heat 200”, has in no way been spared or been the exception. But on this day, the clouds parted and the fans all came to witness the second leg of The Virginia Triple Crown and the crowning of this years Hampton Heat 200 champion. Taking the track on the day would be the ERA Realtor Winged Champ Karts, Carroll’s Automotive UCars, Riverside Paper Pro Six and the Pepsi Grand Stocks. Without a doubt, the air was hot, the humidity was high, the intensity was peaked, it’s no wonder why they call this grand event, “The Hampton Heat”. 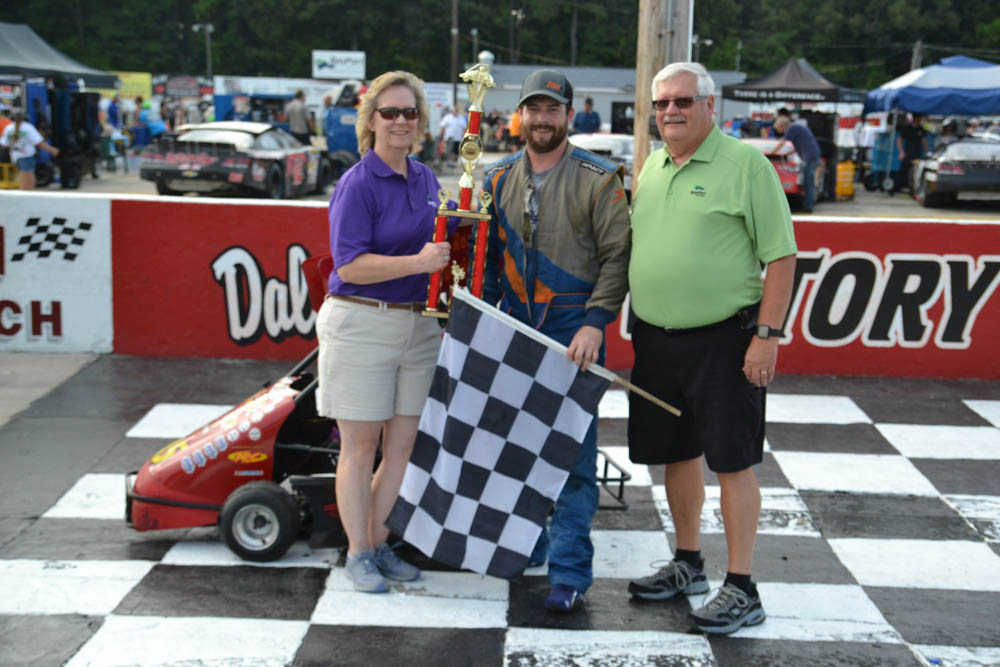 ERA Realtor Winged Champ Karts 20 Laps: Tillman Heuer took the Winged Champ Kart pole posting a 23.184 second lap. Aaron Leach would get a share of the front row with Garry Osbourne, Matthew Leach and Jeffrey Johnson completing the five fastest in afternoon qualifying. Green flag was given and the pole sitter Tillman Heuer in tandem with Garry Osbourne would lead lap one. Matthew Leach, Harry Leach and Chris Bechtel were all the early top five. Out and all alone, the leaders stayed hooked up. With spots three through five way back in the field, anticipation from Osbourne to make his move for the lead would come at any time. But then, lap traffic became involved as the lead changed hands when Harry Leach took advantage. But the lead was short lived when the last lap saw Aaron Leach getting by and going on to win the Winged Champ Kart feature in a thriller. Aaron Leach had this to say, “I can’t thank my brothers enough, I mean, me and Jeffrey got into it and I didn’t mean to turn him. He can see it however he wants, wish I had my Go Pro on to so I can see how many times he flipped me off. Once when we all three got together, I mean, it was rolling and I can’t thank them enough”. 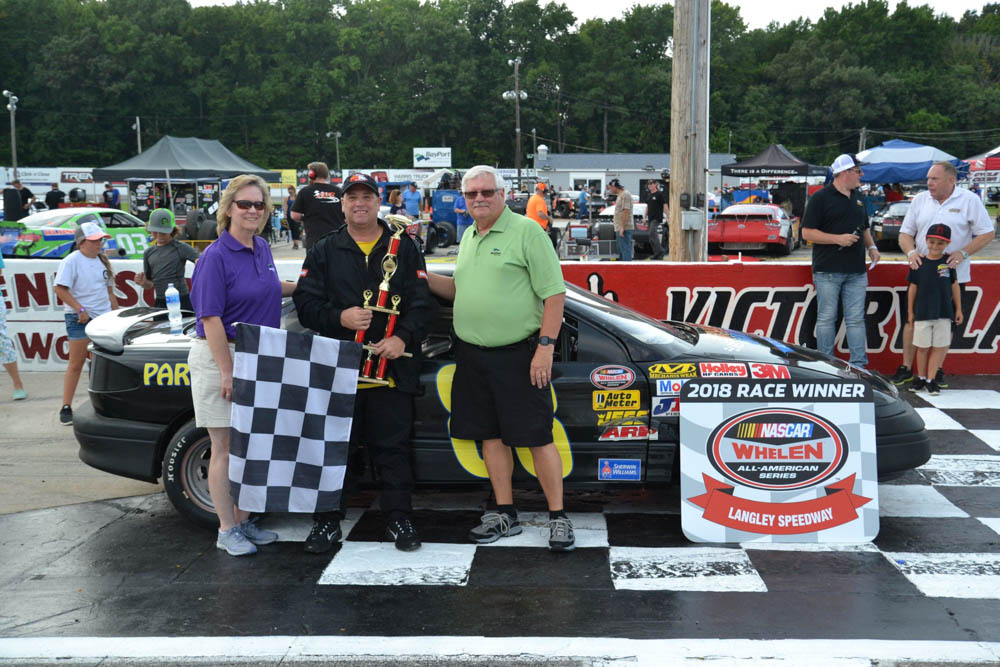 Carroll’s Automotive UCar’s 25 Laps: Charlie Bryant Jr took the UCar pole position sporting a lap set at 19.260 seconds. Brandon Wood would get the second starting position with Austin Davis, Tillman Heuer and Richard Ellis rounded out qualifying’s five best. Green flag would wave and quickly did Bryant secure his lead. Austin Davis with a great start picked off second and soon turned his sights to the race leader. Still early into the feature saw Charlie Bryant Jr take command and began pulling away from second place Davis. Brandon Wood had third, Richard Ellis was fourth and Tillman Heuer made up the top five at the halfway. Laps later, the leader Charlie Bryant Jr would be just too much and would go on to win the UCar feature. Bryant Jr from Victory Lane, “Its really a good car Buck it sure is and a lot of fun to drive. I just thank the Lord that I’m able to drive it, they let me drive it and its just fun. Just want to thank the Lord up above for a safe race in the Hampton Heat, it was hot but we made it through. Just can’t thank the Lord for all the opportunities in life and want to dedicate this race to my dad, its his birthday today. Of course, he’s no longer with us, I love him, I miss him and I know if he was here he would be right here in the middle of all that were doing”. 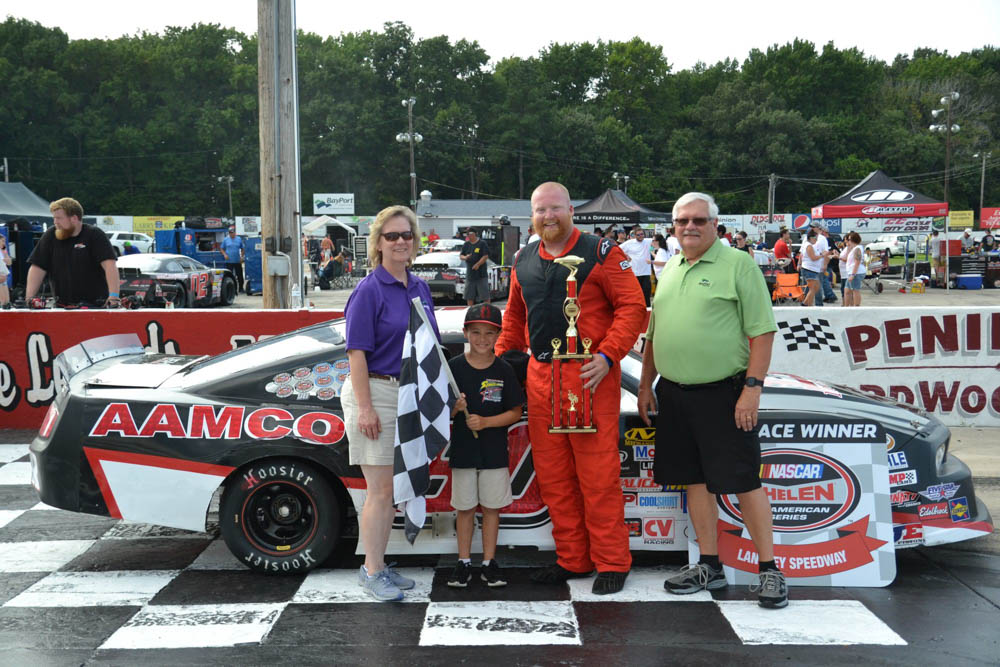 Riverside Paper Pro Six 30 Laps: Adam Florian took the Pro Six pole with a lap at 17.462 seconds. His lap was just twenty six thousandths off the speed of Eric Schaffer and earning the two spot on the grid. Green flag racing began and Florian, the pole sitter gets the start he needed to secure the lead. Travis Wall picked up a spot early when he was able to get by Schaffer for second. JB Sipe and Jared Clarke would complete the early top five in the race. Back to the leaders, all were single file as leader Adam Florian built up his race lead nearly a half a straight over Travis Wall as the halfway went up on the board. Eric Schaffer would narrow down the gap between himself and Wall but could not close enough to challenge for the spot. Meanwhile, leader Adam Florian continued to check out and would go on to win the Pro Six race feature. Florian had this to say, “We took a whorl at it today, didn’t know what the track was going to do with all the rain. We knew (Late Models) were racing before us, went ahead and freed her up and see what happens, go for it and it worked out great. I know we were all out here yesterday but it sure was good to see everyone come out on a Sunday”. 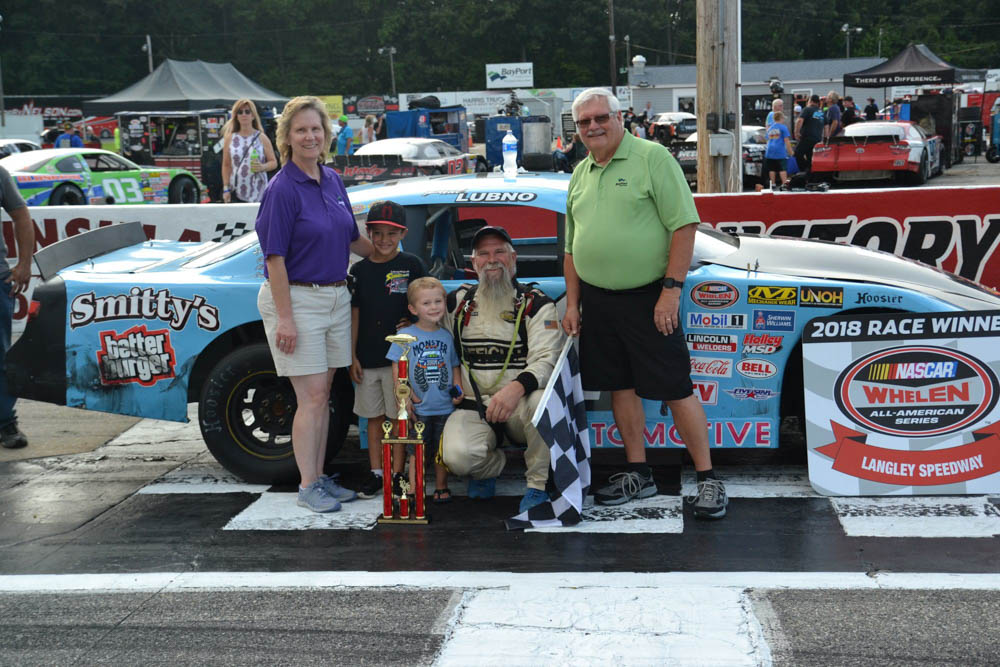 Pepsi Grand Stock 40 Laps: Tim Wilson grabbed up the Grand Stock pole by posting up a lap set at 18.088 seconds. Paul Lubno would get a share of the front row with the speed he showed in qualifying. With the green in the air, Tim Wilson by turn two secured the lead but Paul Lubno could not get going and settled into third as Brandon Hinson took second. Still way early in the race, the field soon became single file and hitting their marks on each lap. Paul Lubno took advantage of the loose wheel of Hinson to get back to second who then started to chop away at Wilson’s race lead. Lap by lap did Lubno cut into Wilson’s race lead when the halfway came, so did the battle for the race lead. Tim Wilson would do a great job making it near impossible for Lubno to pass but soon Lubno would force Wilson into a mistake and taking the race lead. From there, Lubno in the clean air would pull away from Wilson and go on to win the Grand Stock race feature. Lubno in Victory Lane, “Yeah, we had a rough week, we came out here Thursday and broke the motor. Actually, broke the distributor, got that fixed, then transmission problems. Special thanks to Gene Nichols for helping me go through all the things on it, Charlie High, without those guys I thought we were doomed”. 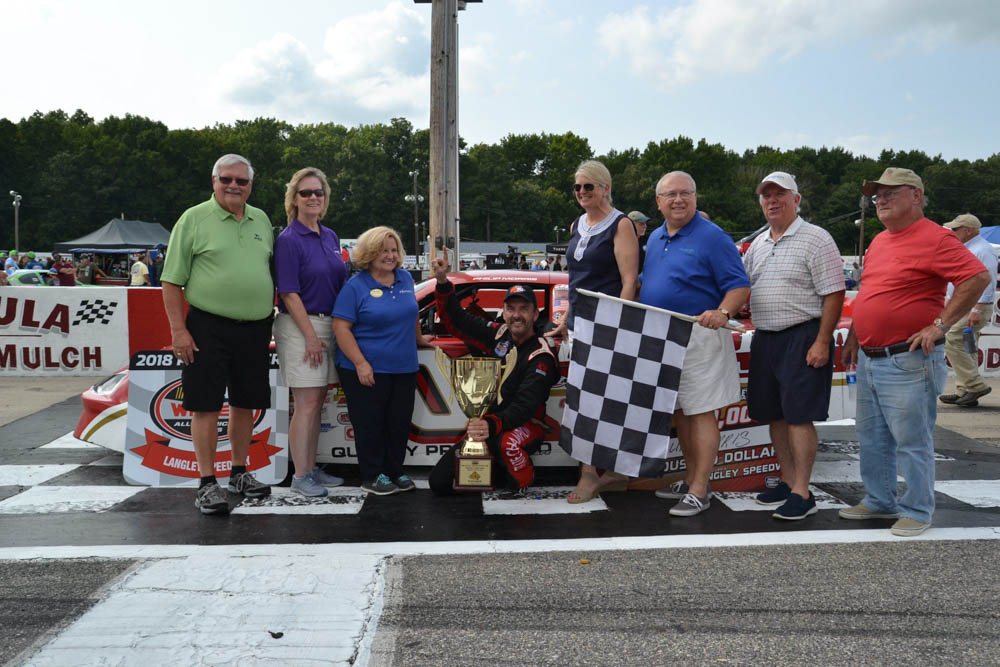 NWAAS Late Model Hampton Heat 200 Laps: With approaching storms on the horizon and threatening the afternoon time trials. Philip Morris continued to impress by picking up the Hampton Heat 200 pole with a lap set at 15.584 seconds. Morris knocked off outside row one starter Peyton Sellers who easily earned the two spot to settle row one. On back, last years race winner Bobby McCarty nabbed up the third starting position with Brandon Pierce and Matt Bowling as the top five. Notables Brenden Queen was sixth, CE Falk tenth and Mark Wertz in twelfth. Green flag was shown and the thirty one car field roared to life, darting into turn one to begin the race. Emerging out of turn two with the lead secured was pole sitter Philip Morris with Peyton Sellers tucking in to give chase. Also getting in line were the cars of McCarty, Pierce and Bowling with everyone content of the results of the start of the race. Still early in the feature, Bobby McCarty would get second from Sellers but back up front, leader Morris had caught the tail end of the field on lap twenty six. Surprisingly, up to this point the race had gone caution free as tire management would go full tilt as lap times showed. Early movers so far in the feature were the cars of CE Falk, Woody Howard and Thomas Scott all making their way into the top ten as the first quarter of the race was completed. Meanwhile, leader Morris was picking them off one by one with McCarty mirroring the line of the leader as heavy lap traffic came into play. Laps later, action for third picked up when Sellers received the horn from Pierce’s ride to take the position. But then the races first caution on lap sixty when Chris Johnson had a flat tire causing Brandon Pierce and Matt Bowling to check up sending Pierce on around. After a quick clean up, important restart for anyone wanting the point that Morris had enroute to the halfway. Green was back over the track and taking the cone would be Danny Edwards Jr. Edwards would get a nose by the leader but slipped in turn three giving the shorter line to Morris to secure his race lead. After a brief debris caution, the race was back to green with Morris again winning the restart. Danny Edwards Jr would remain second but benefitting from the restarts saw CE Falk up to third as the halfway loomed. The third caution period took to the track on lap ninety eight when Matt Bowling went around. By virtue of the spin as caution laps counted, the race would then reach the halfway break. At the break, minor adjustments, fuel and two tires were allowed to the cars in preparation for the second half of the race. With the green back in the air, Morris quickly had the upper hand securing the point after a brief battle from Danny Edwards Jr when the race was halted by the spin of Garrett Bunch setting up another exciting restart. CE Falk would take the cone at the restart but had little for the leader Morris when the green waved and had to settle for second. After another stop to the race for a caution, Morris continued to lead with Falk in tow. Getting in some green flag laps, Morris started to build a lead when the so called big one brought out the red flag on lap one thirty. Connor Hall, Mark Wertz, Woody Howard whose car turned into a ramp for Casey Wyatt who then went airborne over the roof of Howard to bring a complete stop to the race. When all was cleared, the race was back under green, Morris with another strong restart and retained the lead. Beating and banging for spots three through five ensued as Thomas Scott finally getting third from McCarty. But back up front, Morris had built up a half a straightaway lead over second place Peyton Sellers. With fifty to go, the action was intense as go time was on the track. Laps later, the hard racing had taken toll as the leaders who were now all single file and the spots for position unchallenged. Peyton Sellers, in need of one more caution running second with laps whining down never got the caution he needed as Philip Morris goes wire to wire and wins the tenth annual Hampton Heat 200. Morris in Victory Lane, “Had a great race car, wore my 52 year old butt out”, said the race winner. “Seemed like the right rear was going down, I was just trying to keep it straight, I don’t know if it’s flat or not. Just want to thank God, its all him right here, just want to thank all my fans. Thank Forrest Reynolds and the whole crew for working so hard. Want to also thank Langley Speedway and all the sponsors. Want to thank all the Triple Crown guys, South Boston, Cathy Rice, Clay Campbell and everyone who puts it on and makes it a great race”.