Breaking into the warm days of June, each race division has clearly established its leaders. Some have been red hot while some have struggled in recent weeks. With highly competitive points battles going on in each division, each week of racing, each position on the track will shape up just who will earn a 2017 track championship. This week’s racing was no exception as on the evenings race card was the Trip Anderson Realtor Winged Champs. Followed by the Riverside Paper Pro Six’s in twin race events, Old Skool Video Games Super Streets, Bojangles Enduros and Taylor Waste Services Late Models. Here is a recap of the evening exciting race action from Larry King Law’s Langley Speedway. 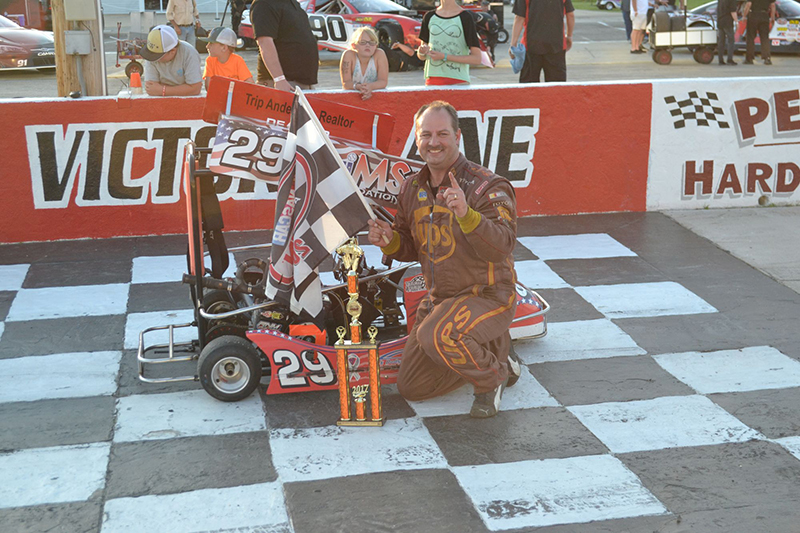 Trip Anderson Realtor Winged Champs 20 laps: Brandon Lorah was the afternoons fastest in qualifying for his second pole of the season. Sporting the pole lap set at 23.234 seconds, Aaron Leach lap which was just fifty six thousandths off and worthy of the share of the front row. Race action was underway, so was the beating and banging as Aaron Leach lead lap one. But as lap two clicked, Brandon Lorah the pole sitter reclaimed the lead and began to set the pace. Several laps later, Lorah would lead the three car tandem into the latter stages of the race when on the last lap. Scott Allen with a bump and run was able to knock the race line of the leader and beat Lorah to the stripe. Only nineteen thousandths of a second was the difference in the photo finish. Scott Allen in Victory Lane, “Man you don’t know how nice it is to come to Langley and win. It’s a place I’ve always wanted to win at”. 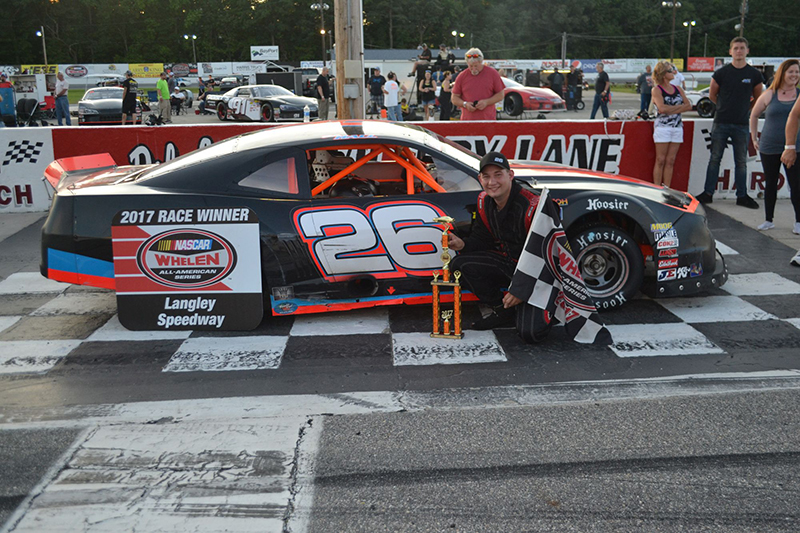 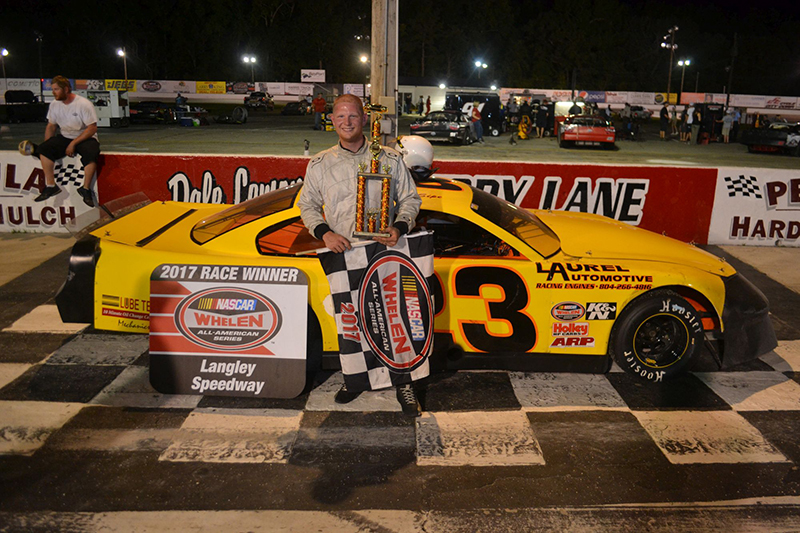 Riverside Paper Pro Six’s 25 laps: Justin Fuller lead the time trials with a lap at 17.291 seconds over an eight car field in the Pro Six division. The hot wheel of Adam Florian who has so far dominated the division would start shotgun to the pole sitter. Green flag race action soon began and from the three spot on the grid, Bobby Hall quickly did away with Fuller to lead lap one of the event. From there it was on and building a ten car lead by the latter stages of the race was the race leader. Justin Fuller would give chase but the evening in the Pro Six division belonged to race winner Bobby Hall. From Victory Lane, “Yeah man we finally did it, this car had so many gremlins when we first got it”, explained Hall. “It’s a pleasure to race against the Florian’s, to finally, finally get him, it’s been a long time coming. I mean, we worked so hard the past two years after Langley closed down, we didn’t know what we were going to do. I just got to thank Bill for bringing this track back and giving me an opportunity to race”.
In the second Pro Six race feature, the mandatory eight car invert was handed down giving Casey Sipe the pole and sending race one winner, Bobby Hall to the rear of the starting grid. Green flag would wave and on the move from the four spot was Travis Wall to take the race lead. After a few cautions in the early goings that knocked out the services of Bobby Hall and points leader Adam Florian. Travis Wall set sail while enjoying a lengthy race lead. But suddenly the lead collapsed as Casey Sipe with Justin Fuller would run down the leader. But with just a hand full of laps remaining, leader Travis Wall’s engine expired handing the lead to Casey Sipe. From there, Sipe would hold off the charge of Fuller and cross the stripe first for the race win. Casey Sipe from Victory Lane, “Appreciate my family for sticking in there with us, it’s been a rough couple of years, the year off when we didn’t have a track to come race. We by no means had a winning car tonight, the car was so bad in the first race I had to park it”, explained Sipe. We didn’t know if we fixed the problem so we elected to start in the rear. We’ve been down on speed all year and the car wont rotate through the corners like the new cars, I’ll take a win any way I can get it”. 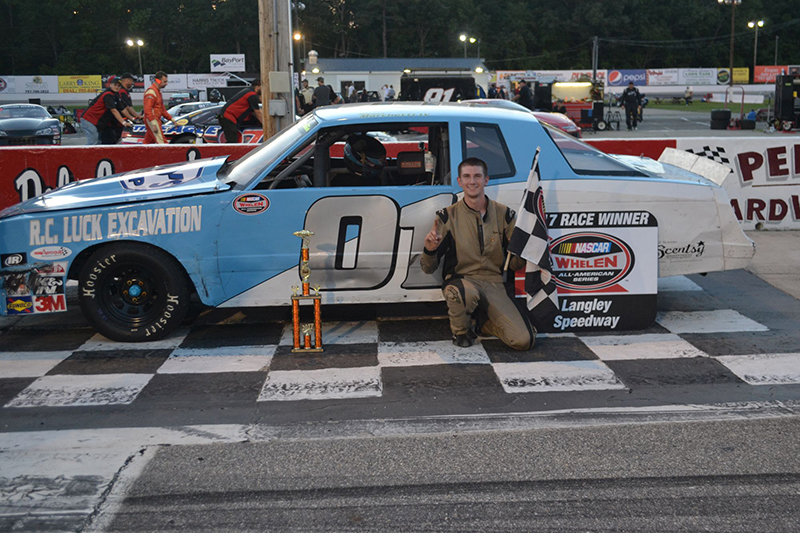 Old Skool Video Games Super Streets 40: Renno Marchetti IV had the fastest hot rod in qualifying with a lap set at 18.917 for his second pole on the season. Sammy Gaita was just a bit off the pole speed but fast enough to earn the two spot on the grid. Landon Abbott, Randy Akers and Sean Calway rounded the five best in qualifying. Green flag waved and quickly the pole sitter wasted no time in securing the lead. Both Landon Abbott and Sammy Gaita would battle for second with Abbott earning the position. Meanwhile, Marchetti was getting away and in cruise mode in the early stages of the race. The race was halted by two cautions periods but it was the final one that race leader Renno Marchetti IV was money and would go flag to flag for his first race win of the season. Marchetti from Victory Lane, “We definitely got the car back tonight, I’m just thrilled to have it back the way it used to be”, says the race winner. “I really gotta thank Larry King Law’s Langley Speedway for giving us such a great place to race. Gotta thank Old Skool Video Games, thank you for being our division sponsor, thanks to all my fans for coming out and Happy Birthday to my sister Denise”. 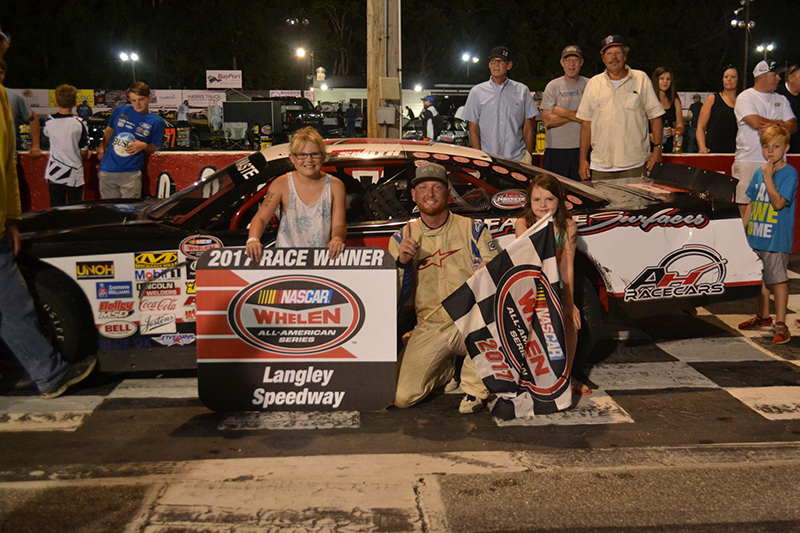 Taylor Waste Services Late Models 100 laps: Matt Waltz would show the field to the green by earning his first pole of the season. Posting a fast lap at 15.964 seconds, the lap was just forty five thousandths quicker than the current series points leader Justin T Carroll who would start with Waltz on the front row. Green flag would fly and off to a great start was the pole sitter Waltz. Several laps in, Waltz had built up a ten car length lead as Nick Smith and Greg Edwards gave chase. Just before the halfway point in the race, two caution periods slowed down the event as Matt Waltz continued to show the way. Greg Edwards was involved in one of the cautions ending his night abruptly. After the halfway, the race got thrilling when Mark Wertz captured the lead before Waltz was able to get it back. Couple of cautions later, Nick Smith wanted to lead with just three laps to go in the event. But it was the last lap between Smith and Waltz that everyone would remember when Smith got position out of four and went on to cross the stripe first, Waltz would settle for second. Nick Smith in Victory Lane, “I tell ya, that was just some good ol’ short track racing there”, an exhausted Nick Smith said. “We didn’t have the best car tonight, Matt by far had the best car. It’s just them restarts and we were able to get our tires cooled and hang in there a little bit. I knew we were doing everything we could to race hard without wrecking each other. I just got lucky that’s all I can say, we were both just driving the wheels off of it and I came to the line first”. 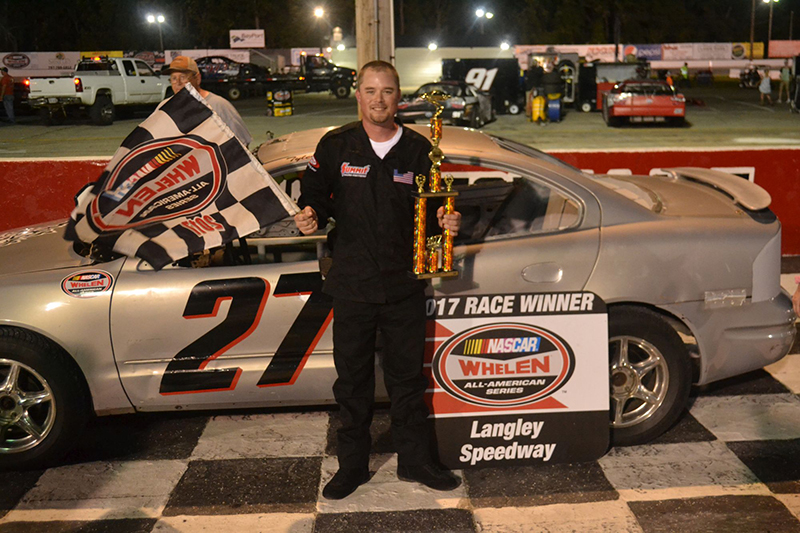 Bojangles Enduro’s 30 laps: Tyler Baker pulled out the right pill to start on pole for the race as Enduro race action was back at Larry King Law’s Langley Speedway. Race action got underway and Tyler Baker took advantage of his fortunes going flag to flag for his first win of the season. Richard Quinn who has won the last three events started eight in the grid but could not get to the race winner finishing second. Rodney Davis who started in second finished third respectfully, Tyler Baker from pit road. “That’s it man, it was a good time, put in a lot of hard work. Thank Larry King Law’s Langley Speedway, my wife, my kids, my father, friends for all there help and all the fans that came out”, said the race winner. It was an awesome time, a great group of guys to race with and glad we had a long green flag run, that was fun”.