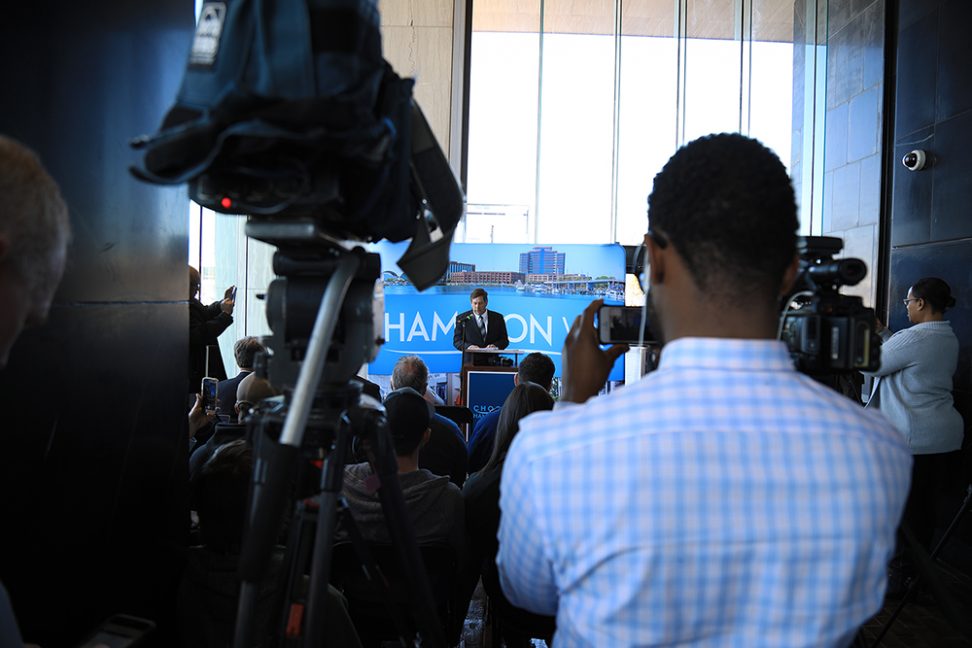 Feb. 17, 2017 – Bill Mullis, the operator of Langley Speedway in Hampton, used City Hall as a backdrop Friday afternoon to announce that he has purchased the speedway property and racing will resume there in April.

Joined by Hampton Mayor Donnie Tuck and City Manager Mary Bunting, who welcomed the Speedway’s return, Mullis said, “I just can’t thank everybody enough for being here to support me and support this city.”

Langley Speedway closed at the end of the 2015 racing season, when Mullis and the former owners of the property could not reach an agreement that would keep the track open.

Tuck noted that the careers of many racing greats were ignited at Langley. And Tuck and Bunting said that the speedway hosted a number of important events over the years, including the Drive for Diversity, which served as a training ground for drivers from diverse backgrounds and offered them a chance to be selected to drive for a professional NASCAR team.

Bunting said the Speedway has been a tremendous asset to the city and the region, with local residents, hotels and retailers benefitting from enthusiastic race fans. “We as a city lost more than $100,000” in overnight visitor economic impact when the speedway did not operate last season, Bunting said. “And the benefits are not just monetary,” she added, noting that the city in recent years received $10,000 through Langley Speedway and NASCAR’s Clear Air Tree Planting Program.

Langley Speedway has been a local racing fixture since the 1940s, when it was an oval track used for thoroughbred horse racing. Later shortened and dedicated to car racing, it was renamed Langley Field Speedway in 1963. When Langley Speedway closed in 2016 it was southeastern Virginia’s longest running professional sports enterprises, and a popular local and tourist destination.

Mullis was joined at the news conference by a representative of Chesapeake Bank and a representative of the former owner, who encouraged the new owner to “start your engines.” For more information, contact Speedway spokesman Chuck Hall at 757-802- 5092 or chuck@langley-speedway.com.